Stagestruck: At Barrington Stage, a revival and a premiere 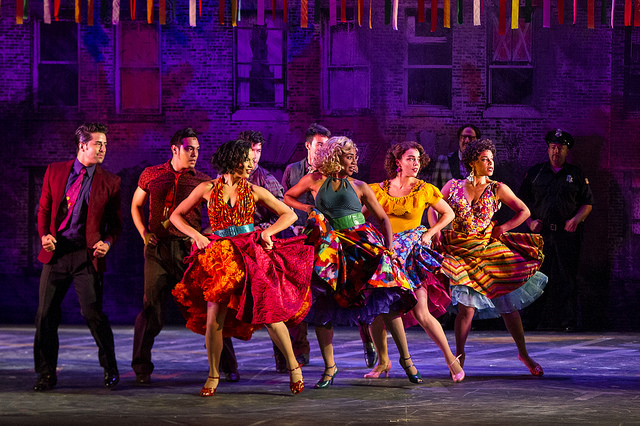 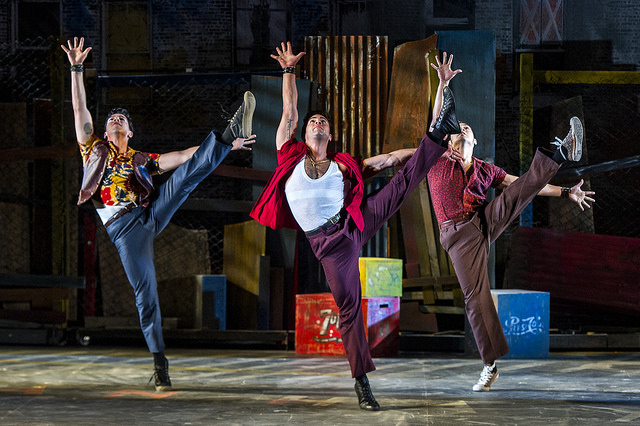 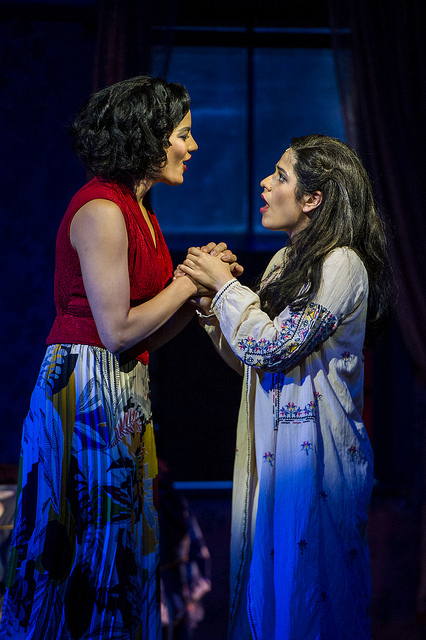 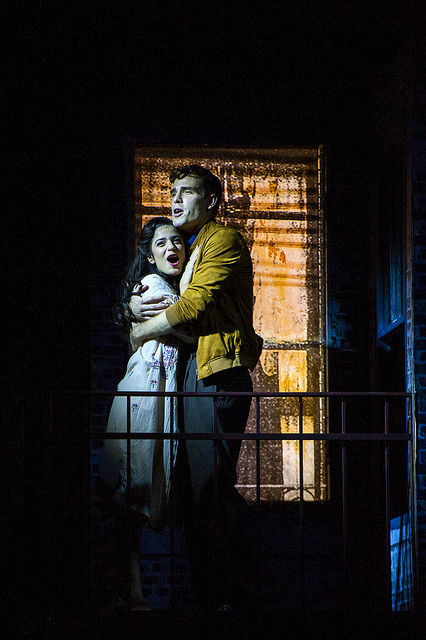 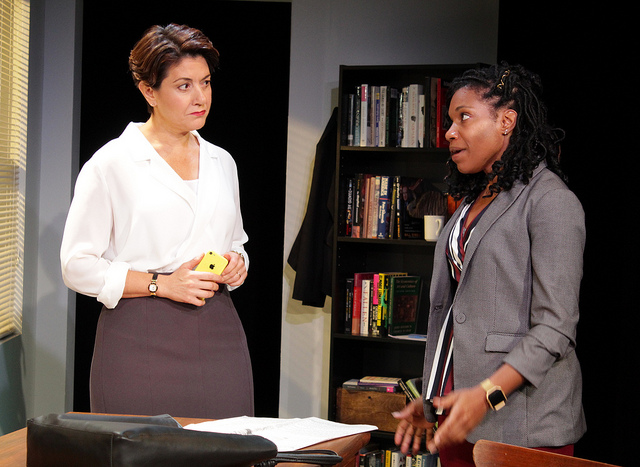 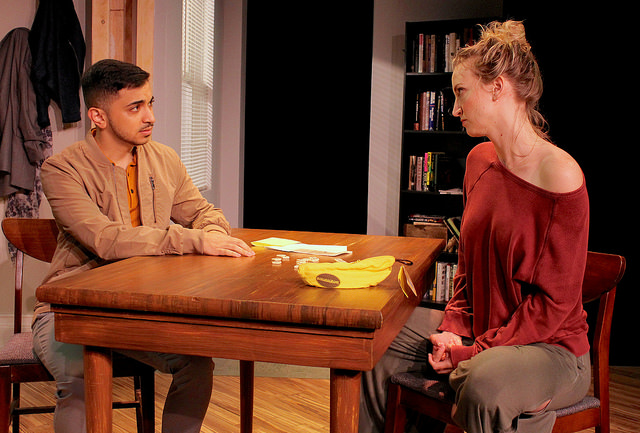 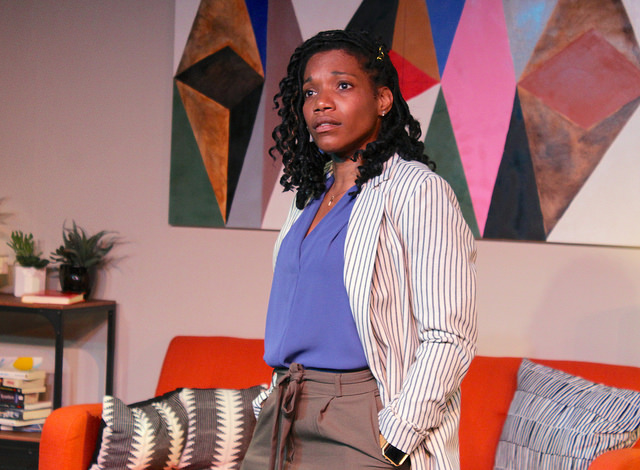 Barrington Stage Company in Pittsfield is ending its impressive summer season with a pair of productions, one celebrating a 50-year-old milestone, the other confronting our troubled present. On the mainstage, a lovingly rendered revival of West Side Story, running through Sept. 1st, honors the musical’s half-century along with the 100th birthdays of its prime creators, composer Leonard Bernstein and director/choreographer Jerome Robbins (the lyrics were penned by a young novice named Stephen Sondheim).

And on the company’s second stage through the 8th, Well Intentioned White People introduces a splendid cast of Berkshire newcomers and an exciting new playwright in a world premiere whose themes are scorchingly topical and stubbornly enduring. 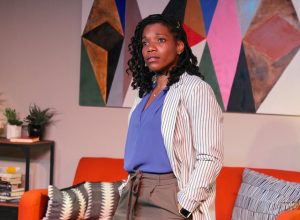 It takes place in “a ‘hip’ and liberal town in a red state,” where Cass Davis (Myxolydia Tyler) is apparently the only black faculty member at the local college. The N-word has just been keyed into the side of her car, but she doesn’t report it, partly because she knows nothing can or will be done about it, partly because as “a black queer woman at an almost all-white college,” she already feels exposed, and partly because she’s up for tenure and doesn’t want a complaint to rock that boat. (a plot point I found hard to credit – you’d think that in the wake of a hate crime, a hip/liberal college couldn’t not grant her tenure).

Cass’s refusal to make a stink only encourages her would-be supporters to make it for her. Rachel Lynett’s Well Intentioned White People has three title roles. Cass’s housemate (and former lover) Viv is so outraged, at both the act and Cass’s shrugging reaction, that she leaks the story to the local paper. On campus, the dean grabs it as an opportunity to stage a consciousness-raising Equality Day, which quickly expands into Unity Week. And then there’s Mara, a high-strung student activist who recently wore a hijab to class in solidarity with Muslim refugees.

This is fertile ground – institutional racism and white privilege meeting in academia – and it could go in a couple of different directions. I got the impression, though, that the author – and perhaps director Tiffany Nichole Greene as well – couldn’t quite decide on which one. 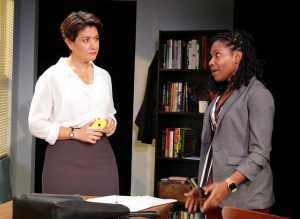 There’s a delicious premise here for a satirical comedy of errors, as Cass is buffeted by good intentions that just make things worse – comedy with teeth, of course, considering the topic. The script does supply its share of laughs. Some of them flow from Cass’s exasperated attempts to deflect the help she doesn’t want, and more from her they-just-don’t-get-it exchanges with her best friend and closest faculty ally, Parker (Samy el-Noury), a Latinx trans man.

But the show veers from cartoonish parody to trembling rage, ending with pointed home truths. The broadest portrait is of the dean, played by Andrea Cirie, who barges into the situation, elbows akimbo, bubbling with ideas she expects Cass to bring about. Intense, humorless Mara (Cathryn Wake) takes her entitlement and activist credentials as license to demand special treatment from her professor. 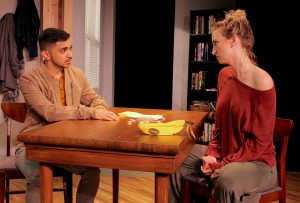 Viv (Victoria Frings) is a sincere but naïve do-gooder who’s all about “action plans” but is mocked by Cass and Parker because “everything is all about her” – which I didn’t quite see, possibly because Frings’ performance is the production’s most finely detailed and thus the most credible.

I sometimes found it hard to sympathize with Tyler’s Cass, who follows an inflexible through-line – a victim of her situation rather than an active player – which would serve the play’s satirical-comedy potential but weakens its aspiration to drama.

Adam Rigg’s set cleverly doubles as Cass’s campus office and her home, not only an efficient use of the theater’s small stage but a suggestion of her thwarted attempts to separate her professional and personal lives.

Toward the end of the play, Cass addresses the Unity Week rally she’s been pressured into keynoting. She’s tired and pissed, and says so: “I’m not interested in being the poster child for ‘the end of racism,’ or how we’re all equal. We aren’t. We have never been equal.”

She continues: “You know what doesn’t help and what needs to stop? White guilt. Because look where the fuck that got us.” Then she steps away from the mic and looks straight out at us – an audience mostly composed of well-intentional white people.

“But it doesn’t have to be. You have to get involved. Now. Get involved before the incident. Before the tragedy. What are you doing right now to stand up for the oppressed in this community? Are you calling your senators about these issues or are you just posting about it? Be honest.” 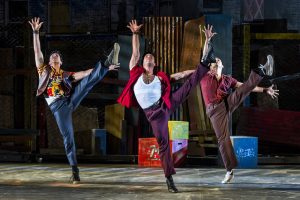 From the opening moments of its now-classic Prologue, the first audiences for West Side Story’s premiere in 1957 were astounded. I was there, as a teenager, electrified by Leonard Bernstein’s moody, angular music and the finger-snapping, denim-clad street toughs suddenly exploding into impossibly high kicks. This Romeo and Juliet updating was no boy-meets-girl song and dance. It was unlike anything Broadway had seen before.

I was thrilled all over again from the start of BSC’s revival, with Jerome Robbins’ choreography “reproduced” by Robert La Fosse. But resurrecting the look and feel of the original (and of the 1961 movie) doesn’t mean this production is a lifeless homage. On the contrary. Julianne Boyd’s production and her youthful cast (two-dozen strong, plus three grown-ups, supported by another dozen musicians in the orchestra pit, the company’s biggest-ever show) give the piece all the fresh exuberance and fiery passion it deserves. 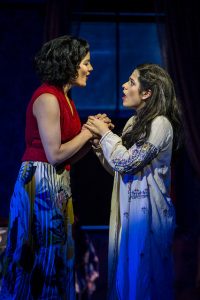 With one exception, the leads are terrific. Tyler Hanes and Sean Ewing, as Riff and Bernardo, leaders of the rival gangs, shade their characters’ tough swagger with fleeting moments of vulnerability – boys striving to be men. Skyler Volpe is Anita, Bernardo’s girlfriend, just as tough, twice as smart and vivaciously sexy. Addie Morales brings a feisty determination and a lovely pure soprano to Maria.

The surprising disappointment is Will Branner, as Tony, Maria’s forbidden love interest. His voice often lacks modulation and at times his face and body seem unconnected to his feelings – no fervent Romeo but an uncomfortable suitor.

Five decades ago, West Side Story’s thematic undercurrent was the plague of gang violence on New York’s streets and the ethnic tensions fueling it. Today again, it’s the fear and hatred of immigrants, the perceived threat of outsiders invading “our” turf, along with racism – the star-crossed lovers defying not just social boundaries but bloodlines.