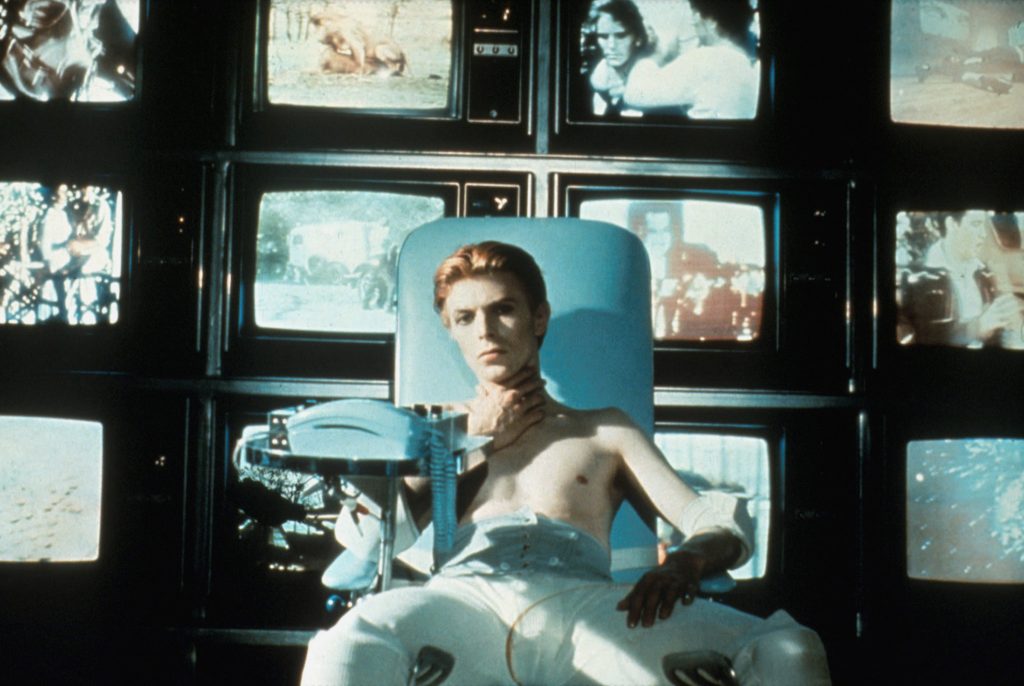 For all his undeniable talent as a musician and songwriter, the late David Bowie was always an incredibly visual creature. His many guises onstage and off told the story of an artist completely comfortable with the process of reinventing himself, and while some might see it as mere resurfacing — the suit and tie that gave way to the glam of Ziggy Stardust that morphed into The Thin White Duke — Bowie never let it stop at skin-deep. His changing looks were a manifestation of his own evolution, but also a means for the rest of us to reflect on the changes we were all going through.

It was also part of what made him so spectacularly suited for a career in film. And while he was never a “film star” in the conventional sense (what of him was ever conventional?), his many roles over the decades only deepened the feeling that Bowie was truly otherworldly, a curious alien walking among us, endlessly intrigued by the oddity of human nature.

Of the dozens of films he appeared in, it is perhaps Nicolas Roeg’s 1976 sci-fi picture The Man Who Fell to Earth that best encapsulates the wonder and melancholy that seemed to go hand in hand with Bowie, even if his turn as the Goblin King in Labyrinth is what will remain his best known role. Here Bowie stars as Thomas Jerome Newton, a being who crash-lands on Earth during a search for the water so desperately needed on his own drought-ravaged planet.

At first, it would seem that Newton is above the base pleasures of humankind. But as he works toward building a spacecraft capable of transporting water home, Newton finds that the business of doing business starts to become its own mission, distracting him from his original goal. And when he falls for the small-town girl Mary-Lou (Candy Clark, fresh off an Oscar nomination for her role in American Graffiti), all bets are off: introduced to gin and television, Newton becomes dangerously distanced not just from his original mission. But from the memory of the wife and children he left behind. As his empire grows larger, his world grows smaller.

It all goes off the rails in a particularly American way, which I won’t say too much about here for the sake of those who haven’t yet experienced Roeg’s film, showing here in the full, uncut, 140-minute version. Suffice it to say that the isolation Newton comes to endure feels particularly well-matched to the public persona of Bowie, and that even the most beautiful prison is still made to keep you trapped within its walls.

If you find yourself yearning for more of the alien, there are a few documentaries about Bowie available to stream online. Bowie: The Man Who Changed The World opens with a broadcast interview from just about the time that Roeg’s film was released, in which Bowie spars with an interviewer who seems set on creating something off-kilter. It’s a flat opening for a flat film that in the end is more of a cobbled together bunch of clips (pay attention and you’ll notice that Bowie’s music is conspicuously absent for much of the film, likely to keep music fees down and profits up). It’s on Netflix, but hard to recommend.

A better bet would be David Bowie: The Last Five Years. Released this past January and currently available to stream on HBO, Francis Whately’s documentary is a bookend to 2013’s David Bowie: Five Years, which looked at five pivotal years in the artist’s earlier career (it’s also well worth a look, if you can find it). This newer film chronicles the remarkably productive last few years of Bowie’s life, when he put out some of his most vital music, and, in true Bowie fashion, continued to explore new terrain.