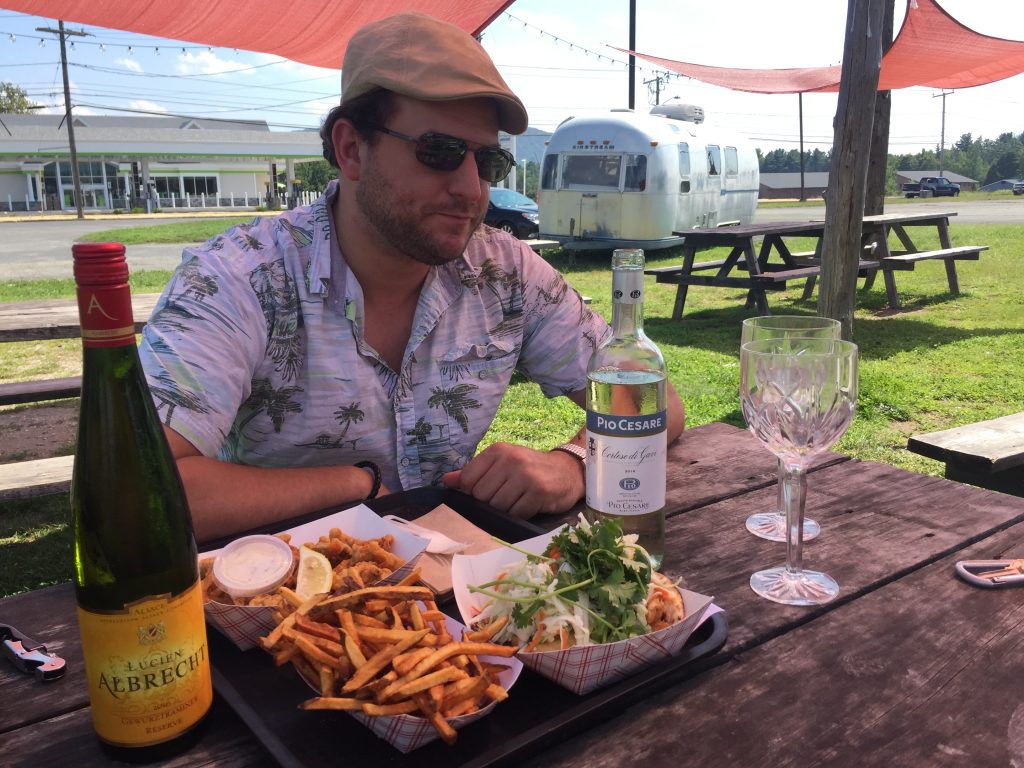 Some of the greatest ideas in human history were concocted while cocked. Allegedly, Grant won the Civil War while entirely inebriated. Kruschev avoided war while gently jingled. And Iron Butterfly wrote their biggest hit, In-A-Gadda-Da-Vida, while thoroughly chateaued. Now, I am not advocating for daily debauchery. But I am advocating for more day drinking during the workweek. This may allow you to loosen up, be more creative, and solve the problems of the world.

My dear friend and fellow wine snob, Brian Wozniak, and I have been day drinking together for years. Known to my radio audience as “The Wine Squirrel” for his scrappy ability to squirrel-away a fine bottle (or six) of wine, and his ability to weasel his way into your heart, The Wine Squirrel and I began our “drunken luncheons,” as we affectionately call them, back in 2013. For years, there was nary a Wednesday at noon where you would not find us at Local (Burger) on Main Street, back when he was still a wine salesman and back when Local was still BYOB. At the end of many of those meals, Wine Squirrel would often say “Well, once again we solved the problems of the world.”

With our evolving careers and schedules, our get-togethers are more infrequent. And now, on the rare Wednesday when we can pull it off, we are most often “B-ing our own B” at Captain Jack’s Roadside Shack in Easthampton. It was there, last Wednesday, where we, once again, solved the problems of the world. At least some of the more banal straight white-dude problems.

While drinking a 2016 Pio Cesare Cortese di Gavi from Italy and 2016 Lucien Albrecht Gewurztraminer from Alsace, with a pile of some of New England’s finest fried clams and two fish tacos, our topics of conversation ranged from:

How lucky we are to have both potable water AND alcohol.

Sweetness vs spice in wine and food pairing.

The huge local political rumor that pretty much everyone in the media knows about, but no one is allowed to talk about publicly.

Trump and the legal system.

The definition of treason.

How many times is too many times seeing Bob Dylan in his current keyboard-playing incarnation?

How to bust the young kids who sneak onto the roof of the radio station to eat candy (God love ‘em).

Is media a perpetuation of society or is society driving media?

How could I possibly have broken a rib while swimming in the Connecticut River?

How nice it is that air-conditioned seats in a car make your nether region feel like you are sitting on an air hockey table.

And what makes for great fried seafood?

Thanks to the Gavi and the Gewurz, we answered all of these questions thoughtfully and solved these particular problems of the world. The answer to “what makes for great fried seafood” has been a lifelong pursuit. I consider myself a fried clam and lobster roll aficionado. I was a little skeptical the first time I tried Captain Jack’s in Easthampton because Easthampton is decidedly landlocked and at least 2 hours from the ocean.

But the first time I tried their fried clams and their lobster roll, I was blown away. The clams are not too greasy. The bun on the lobster roll is to die for. And the lobster is as good a mayo-based lobster salad as I’ve ever had. And I traveled to Maine last summer looking for its equal. Red’s Eats in Wicscasset was a dead heat with The Captain’s, but their lobster salad is tossed in butter. And they are literally right on the ocean. It’s almost an unfair advantage.

Whenever I go to the Cape, I search for fried clams that can rival Captain Jack’s. Mac’s Shack in Wellfleet makes great fried clams, but I prefer to stick to oysters while in Wellfleet. Every other fried clam I had on the Cape was only fair to poor in comparison. I asked Kevin Sahagin, who IS Captain Jack, why his seafood is so much better than the seafood I get on The Cape.

“It’s because I am a chef. And those places are run by high school kids looking to get laid.”

It all makes sense. BYOB and day drinking solving the problems of the world. Seeing as Captain Jack’s future is uncertain, with River Valley Market having purchased the land it sits on, get there while you can!

And how did the wines pair with his seafood? Both were white. It’s not a commandment, but whites are a safe bet with most things from the sea. The Gavi tasted of straw and lemon. It had a high alcohol content for a white, giving it a “hot” finish with a little afterburn. The Gavi’s behavior in humid hot weather, with a feeling of hot dry earth, was almost overbearing. But as Wine Squirrel described it, “It was just fleshy enough to be satisfying.” It was a great pair for Shack food.

Wine Squirrel described our other wine, the Gewurztraminer, as having a citrusy bergamot oil feel, like an Earl Grey tea. It went well with the fish tacos but would be exceptional if they were a little spicier. “Gewurz” means spice. The Gewurz reminded me of the best smelling soap at your favorite hotel. It was so fragrant you could wear it as perfume. In fact, on a different day-drinking day at Captain Jack’s, the Wine Squirrel brought Thomas Schlumberger from the famous Alsatian wine house, Domaines Schlumberger, with his own Gewurz to pair with fried clams.

He told us how his family shipped a bottle of Gewurz to a perfume lab, and how a complex perfume “has up to 100 aroma molecules. But in a bottle of Gewurz there are more than 300. So if you run out of perfume, you can splash on some Gewurz.” He also said “Bon Appetit” before digging into clams, which was the first time this New Englander had ever heard that. And I think the clam shack blew Frenchy’s mind.

Is day drinking wine advisable for everyone? Of course not. If you are under 21, if you are taking it one day at a time, if don’t have the kind of job that affords you the flexibility to be gone from it for two to three hours at a time for lunch, or if your ideas to solve the problems of the world are terrible ideas, day drinking is not for you. Donald Trump does not day drink. He doesn’t drink at all. Perhaps that is a little too telling.

One of Trump’s idols, Winston Churchill, was a fan. He’s a got a quiver full of great drinking quotes. Some of my favorite on the subject of day-drinking and solving the problems of the world include:

“When I was younger I made it a rule never to take strong drink before lunch. It is now my rule never to do so before breakfast.”

“I have taken more good from alcohol than alcohol has taken from me,” and “Remember gentleman, it’s not just France we’re fighting for, it’s Champagne!”

Be responsible, but try having a glass or sharing a bottle at lunch during the work week. It might make you a bit more creative when you head back to the office. Just ask the inventors of Southwest Airlines, Shark Week, The Pet Rock, Buffalo Wings and The Ironman Triathlon, all of which were created after day drinking: solving (and creating) all of the problems of the world.