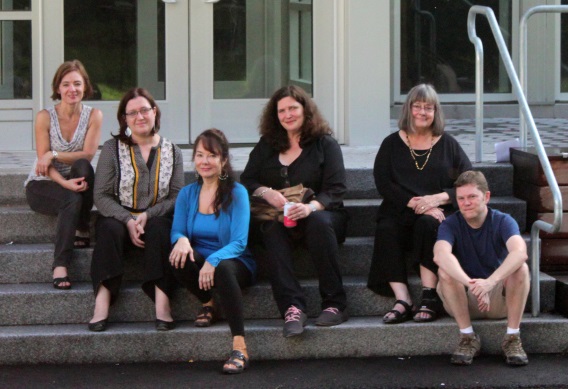 Before a play hits the stage, it goes through several other stages. The first is the opposite of public performance – the writing, solo and in private. Then, for the members of the Northampton Playwrights Lab, it’s shared with a small circle of fellow dramatists, who offer insights and suggestions to the work in progress. Then, usually after several revisions and further feedback, it’s put on its feet for the first time in a reading.

This weekend and next, seven scripts developed in the Lab will be shared with the Valley’s community of theatergoers and -makers in rehearsed, semi-staged readings, under the collective title Play by Play. Together, they constitute the inaugural performance at another work in progress, the FlexSpace Theatre of the Northampton Arts Trust Building. The festival is produced by Nikki Beck and performed by a virtual Who’s Who of Valley talent.

One of the playwrights, Harley Erdman, told me that coincidentally, “without our planning, the plays have a lot of interlocking themes and ideas, and each in its own way is some kind of response to the world today, with depth, complexity and richness.”

Also coincidental, and perhaps surprising, is the fact that three of the plays, from this all-white group of authors, include black characters – and all three are in the festival’s first weekend.

The first, premiering Friday, is New Soul, by Leanna James Blackwell, who describes it as “a deep dive into the question of identity: what makes us who we are?” Its dual focus is on “a young, mixed-race couple in love in France in the early 1960s and a married couple in urban America at the dawn of the new millennium.” The play’s central question, she says, “is especially urgent now, in light of our current polarized political landscape and the furor over identity politics. The play looks at the various ways we belong or don’t belong, the people we consider ‘our own,’ the beliefs we take with us into the world and the beliefs that challenge us.”

Saturday’s performance of Tanyss Rhea Martula’s Fresh Air also looks at two “very different families,” this time in the context of “a summer program that sends inner-city children to the country for different experiences and, hopefully, opportunity.” It unfolds in an exchange of letters between a white mother in Massachusetts and a black mother in Queens whose son is the recipient of the hoped-for opportunities. The play is based on the author’s own experience when her family hosted several Fresh Air kids during the 1980s. “I have puzzled over that experience and the complicated relationships that grew out of it.”

Campus Unrest, by Talya Kingston, takes up questions of identity, gender and race as a new (white) professor and her (black) partner arrive at “a prestigious New England College” where he finds a niche in the campus community of color but she feels pressure to embody the identity politics she’s teaching and is haunted by “the specter of the beloved gender studies professor she is replacing.” There’s also a first-generation African-American student, “trying to navigate who he is in this new world,” especially given the painful contrast between news of police shootings in his hometown and “the more privileged students around him who are concerned about gun violence but happy enough just to write empty Facebook posts about it.”

Campus Unrest shares a Sunday-afternoon double bill with another one-act, Stephanie Carlson’s Seamonster, a comedy about a couple “at an awkward stage in their new relationship: They’re not sure when they’re getting in each other’s way or getting in their own way.” These conflicts are embodied by the characters’ Inner Voices, “who take the stage to banter and bitch.” One member of the couple is a writer whose professional anxieties, “aggravated by communication blunders, cause her to become quite a monster,” while her partner’s “jealousy issues and insecurity don’t help matters.” In the end,” says the playwright, “Seamonster is about how we talk to ourselves and each other.”

Next weekend’s lineup kicks off with another campus-based piece, Harley Erdman’s Institution, “a fast-moving, madcap” comedy about an academic search committee trying to replace a senior faculty member who refuses to retire. It involves “relationships and rivalries,” he says, and is “partly a satire on academic ways, which I know only too well” – he teaches at UMass – “but more broadly it’s my response to the world today, and how we ‘move on’ from a kind of toxic masculinity that seems to keep on coming back from the grave, just when we thought we’d killed it.”

Meryl Cohn’s Almost Home is “a drama/comedy about the search for a place to belong.” It begins when Amanda runs off with a new lover, leaving her partner Phoebe with her teenaged daughter. The play, says Cohn, “addresses a situation in which the biological parent leaves and the non-biological parent is left with the kid.” Will their mutual “outrage at being dumped be enough to keep them together? Are they still a family without her?” Twin themes in Cohn’s plays converge here – “unconventional family situations and a person trying to find his or her place in the world.”

“Nobody wants to talk about this stuff!” exclaims Peter Kennedy, author of Family Game Night, the festival’s concluding play. The stuff he’s talking about is death – specifically, planning for end-of-life necessities and contingencies. In his play, three generations of a family reluctantly play a “mildly irritating” board game called “We’re All Going to Die (Eventually)!” which forces them to “struggle with articulating wildly different views about their individual end of life (and afterlife) choices.” Kennedy hopes his play “will begin a dialogue that will continue past the curtain, into the car, and maybe around the kitchen table surrounded by the people you love.” 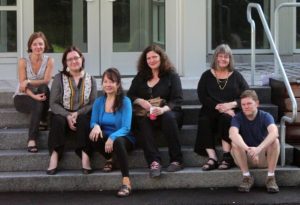 In the FlexSpace Theatre, Northampton Community Arts Trust Building, 33 Hawley Street, Northampton.
All performances begin at 7:30 p.m. except Sunday the 23rd, at 2:00 and 3:30
Suggested donation at the door: $10