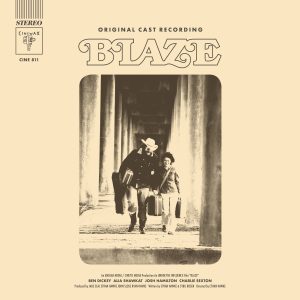 Listening to the soundtrack of a film one has yet to see is a test for the ears. Free of images to pair with the music, the mind digests the sounds heard in as-is fashion. While such an experience can be just as fulfilling as playing a record linked to a well-watched favorite movie, the flip-side is akin to looking at an incomplete picture. The bones are there, but the rest of the canvas is waiting to be fleshed out.

For the soundtrack to the new biographical film “Blaze” directed by Ethan Hawke, the above description is pretty apt. Centered around the tumultuous life of deceased country singer and songwriter Blaze Foley, “Blaze” sounds like a movie that attempts to paint a picture of a character who defies easy description. The soundtrack to the film, featuring performances by the musician and actor portraying Foley, Ben Dickey, amongst others, is a fitting companion piece. What the project lacks in completeness, it makes up for with musical highlights.

Foremost among these highlights are Dickey sung covers of some of Foley’s best-known songs “Clay Pigeons” and “Picture Cards.” The former is a seemingly hopeful tune played on acoustic guitar in Foley’s signature loping finger-picking style. Over added sound effects that mimic chirping birds, Dickey sings of starting over again and going “down where people say y’all.” However, the song’s bright melody belies additional lines about hiding sorrow and changing the shape the singer is in. It’s an optimistic number shrouded in sadness, and given the tragic outcome of Foley’s short life the sentiment is liable to cut straight to a listener’s heart with repeated listens.

Perhaps even more aching in nature, “Picture Cards” is a love song sung from the edge of despair. Again featuring Dickey on vocals and finger-picked acoustic guitar, the track is accented by lonesome harmonica that trails over lyrics that talk of finding daylight in a lover’s eyes, but also of not trying to fall in love and trying instead to wash those feelings away. Still more heartbreaking is the addition of the sound of pool being played in the background of the song’s latter half, as if Dickey is performing the number in a lonely bar with apathetic patrons focused more on their billiard game than on the singer in the corner.

If the impression given so far is that the Blaze soundtrack consists of nothing but melancholy country tunes, then let the record also show that there are moments of levity too. Snippets of chatter like Dickey’s introductory “Okey-dokey smokey” that opens the album, or what appears to be director Hawke cheering at the conclusion of the song “Big Cheeseburgers and Good French Fries” give an added air of informality to the recording of the soundtrack as a whole, and promote jovial feelings of what the atmosphere may have been like on set. This observation goes double for the off –the-cuff sounding duet between Dickey and co-star Alia Shawkat on the cover of Roger Miller’s “Oo-De-Lally” best known from its appearance in Disney’s animated feature “Robin Hood.”

It is also worthwhile to note the album is not just a showcase for Dickey’s talents, though he shoulders the majority of the workload, even writing his own tribute to Foley and the singer’s former partner Sybil Rosen, entitled “Blaze and Sybil’s Lullaby.”  Musician Charlie Sexton, who appears in the film portraying another ill-fated singer and songwriter, Townes Van Zandt, gets in on the action too, contributing a cover of the Van Zandt song “Marie.” And Alynda Segarra of the band Hurray for Riff Raff, who plays Blaze’s Foley’s sister Marsha in the film, is tasked with bringing the soundtrack to a close with her sparse rendition of the Lucinda Williams’ penned tribute to Foley “Drunken Angel.”

The lyrics to Williams’ song provide a telling summation of Foley’s life and untimely death. “Sun came up it was another day / And the sun went down you were blown away,” the words go. “Why’d you let go of your guitar / Why’d you ever let it go that far.”

Those are good questions. Blaze Foley lived a life full of contradictions, so many in fact that even a film garnering as much early praise as “Blaze” probably has its hands full trying to accurately portray every angle of a man, who spent his time running away from tidy identification. The pieces of his story are there, like breadcrumbs ultimately crafting a phantom trail to some firm resolution, but legends are always more than the sum of their parts.

With BLAZE: Original Cast Recording both Foley and Ben Dickey have been cast as stars. Listeners who track down the album and see the film will gain a fuller picture of both men, but if the soundtrack is all one gets to experience just the songs will do. The best of the bunch rise above the level of simple stars. Their timelessness, like Foley’s own saga, will live on forever.