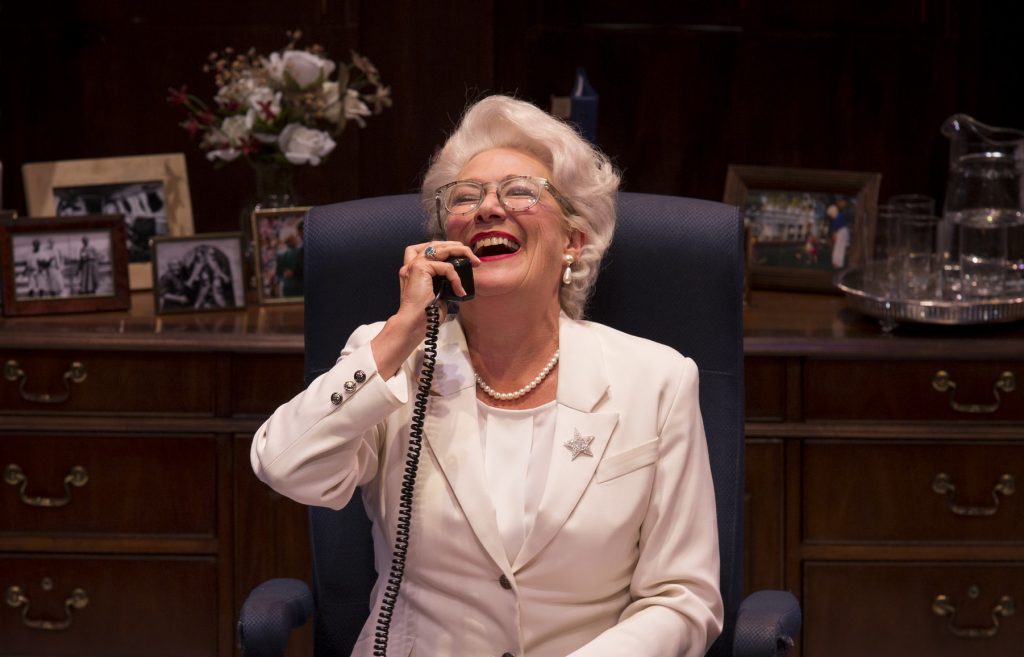 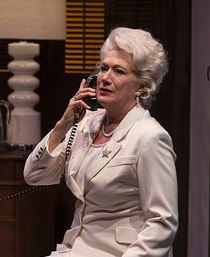 Barack Obama and Ann Richards both sprang to national prominence with sensational speeches at a Democratic National Convention. Richards’ came in 1988, and she used the opportunity to pitch her unique brand of tough-minded common-sense liberalism and kick sand on the white shoes of the Republican nominee, George H.W. Bush.

Her best-remembered line from that moment in the spotlight was “Poor George – he can’t help it. He was born with a silver foot in his mouth.” Surprisingly, that line isn’t in Ann, the otherwise zinger-filled one-woman portrait of Richards that’s playing through Oct. 28 at Shakespeare & Company in Lenox, a production of WAM Theatre, the Berkshire troupe dedicated to work by and about women.

Unlike Obama, Richards did not go on the White House, but to the Texas governor’s mansion, itself almost as audacious a leap. She was elected in 1990, a true-blue woman in a deep-red macho state, a diminutive fireball with a gift for tangy wisecracks and a helmet of pure-white hair atop an elfin face.

Jayne Atkinson is neither diminutive nor elfin, but she sports the trademark hairdo and white Chanel suit (courtesy of wigmaker Paul Huntley and costumer Jess Goldstein) and gloriously channels Richards’ energy, passion and humor with energy, passion and great comic timing. (I saw the play with a friend from Texas, who said Atkinson’s Lone Star twang is close, but no Stetson.)

Most solo shows in which an actor impersonates a famous figure take the form of first-person narratives in which the subjects share their biography and opinions with the audience, often presented as a day-in-the-life snapshot set in the person’s quintessential habitat – Thoreau’s cabin, Wharton’s library, to take a couple of previous examples from Berkshire stages. Some are framed as public speeches that drift into personal history and anecdote – like last season’s Kunstler.

Ann, written by Holland Taylor, who also originated the role, and deftly directed here by Kristen van Ginhoven, does both.

It begins as a college commencement address, where the governor offers homespun reminiscences of her childhood, including an eye-opening year in a multiethnic grade school, her life as a dutiful housewife whose untapped energy came out in alcoholism, and her ascent in local and then state politics, spurred by the notion that “life isn’t fair, but government should be.”

We then move, with Juliana von Haubrich’s breakaway set, into the governor’s office in Austin on a typically fraught workday in 1993. There she juggles multiple emergencies, from a possible stay of execution for a notorious killer to an imminent trip to Mexico whose logistics have been botched by a subordinate (“who “couldn’t organize a circle  jerk”) to corralling her four grown children for an upcoming family vacation.

“Why must I ride herd on everyone?” she moans, but seems to enjoy being the only one who’s able to get things done. She notices a fray in the Texas flag that stands in a corner, and it isn’t long after complaining about it that she gets out her needle and thread. She’s a whirlwind of zest and spunk, by turns demanding and nurturing, imperious and exasperated, and while it’s stimulating to be in her presence via Atkinson’s virtuosic performance, I couldn’t help feeling she must have been hard to be around on a daily basis.

Most of the action takes place on the telephone in one-way conversations – Julie White is the unseen assistant’s voice on the intercom juggling the incoming calls – as Richards paces around the spacious desk trailing the receiver’s long cord (authors of contemporary plays must be so grateful for the invention of the cell phone).

The piece, drawn from Richards’ own words plus “anecdote and imagination,” touches on numerous issues that were dear to her, from abortion (“a subject on which I am always loaded for bear”) to gun control – her veto of a concealed-carry law may have cost her reelection – to women in politics and the right and duty to vote.

Which is where she leaves us, with an oh-so-timely plea for grass-roots participation: “The government isn’t they, the government is you, it is me, it is us. Public servants work for you – you hire ’em, you can fire ’em!”

Ann is an affectionate, stimulating, often hilarious, shoot-from-the-hip tonic for our times. It ends as it began, at the college commencement, where Richards tells the new graduates, “Look kids, the here and now is all you have – and if you play it right, it’s all you need.”