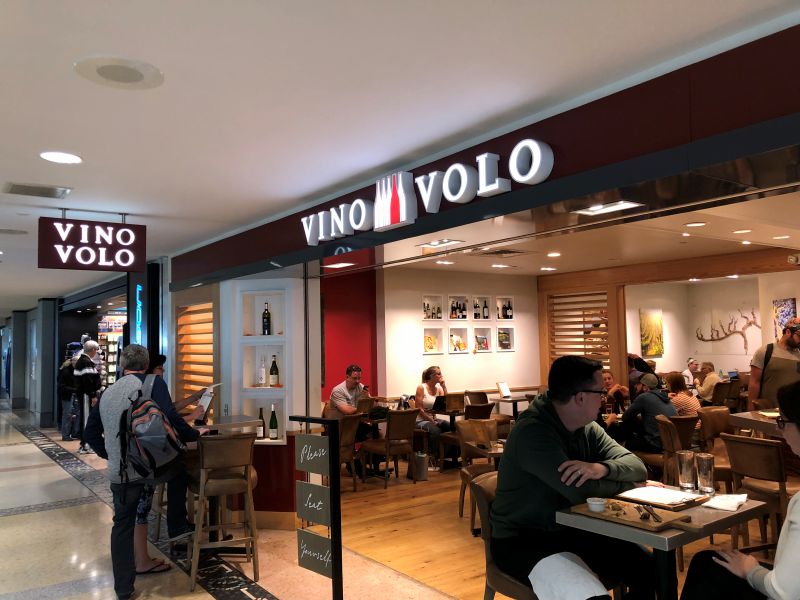 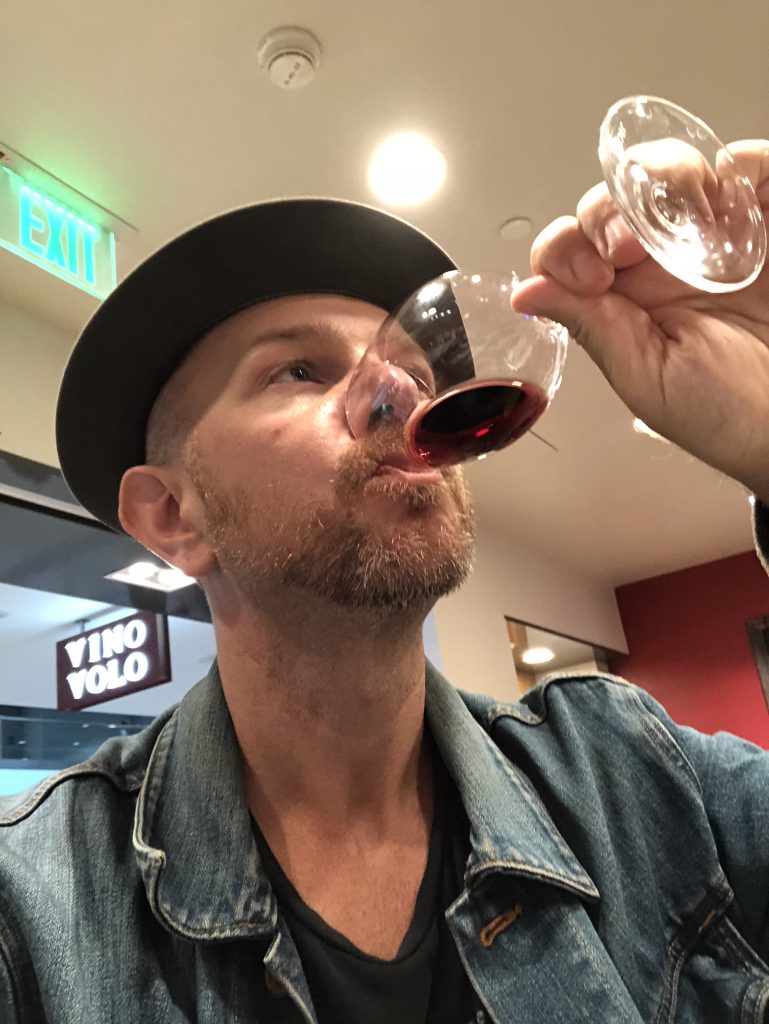 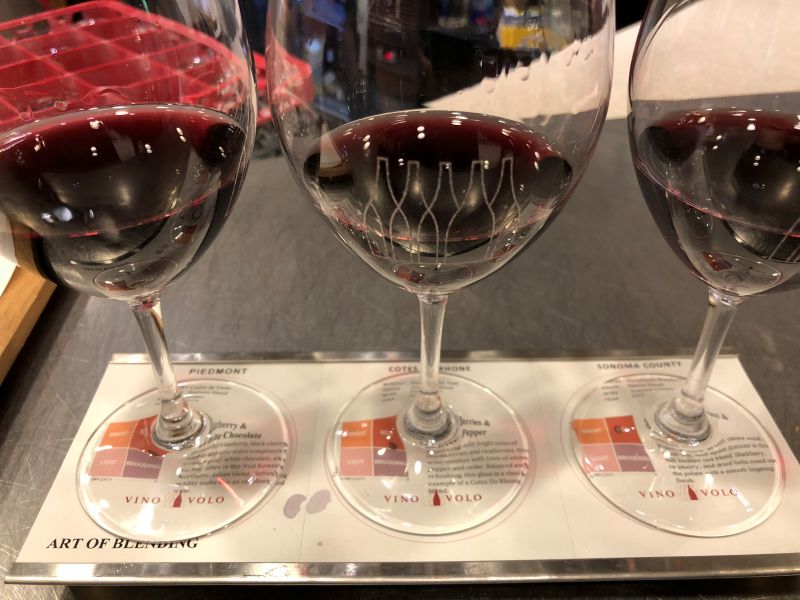 Airports are not known for elegance. They exist in a particular hell, somewhere between a hospital and the Registry of Motor vehicles. Bad food, bad lighting, an unwelcome groping from a TSA agent: all to ready ourselves as we prepare to experience the miracle of flight, packed together like sky sardines in a long, thin, flying tin can, watching from the cheap seats in the back while first class gets a meal brought to them on a silver tray with a stemless glass of red wine and I begrudgingly dip my airline-brand biscotti into bad coffee. “Elbows, knees and toes…” says the most charming of the flight crew, as she smashes into the elbows, knees, and toes of we man-spreading passengers fighting for inches. Still, flying is a miracle of science. And I look for little miracles within the frustration of air travel. 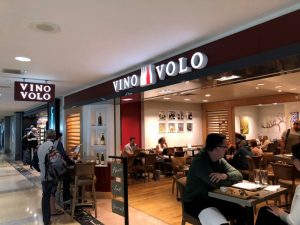 Lugging an overstuffed backpack (and one personal item) through the Denver airport, you might imagine my delight when I spied a slightly-swanky, wine-focused lounge called Vino Volo. Translation: “wine flight.” The name is almost too perfect. After fending off the always tempting Pu pu platter-induced hunger pangs I experience when passing any Panda Express, I endeavored to explore what I could only imagine was going to be a comical parody of a wine bar. I was glad to be wrong.

Started in 2004 by a wine lover and, I assume, frequent flier, Doug Tomlinson, Vino Volo can now be found in about 40 airports across North America. The nice thing about “Wine Flight” is the wine flights; generous tasting pours of “World Value Reds,” “California Kings,” “Rosé All Day,” and “Celebration Sparklers.” Perhaps I had done a little too much celebrating in Boulder the night before, so I opted to try the “Art of Blending” flight before my flight. Three tasting samples, all reds, for $16. Considering I was in an airport where a terrible pre-packaged Wolfgang Puck sandwich will run you upwards of $12, I found this to be quite reasonable.

Each glass comes with tasting notes indicating where the wine sits on a fruit-to-complexity scale, with a four-square chart placing each wine, like a pitch in the TV strike zone, into the categories “bright, rich, light or brooding.” I don’t usually run into wines described as “brooding,” so I asked what it meant. “See these teardrops on the side of the glass? That means it’s brooding,” my server said. Those are called “legs” and often indicate how much alcohol a wine has. That is not, however, how the Vino Volo website describes brooding. It reads “wines that have subtle fruit but are full of other complex flavors such as oak, smoke, chocolate, spice or flowers…” A broad definition, but I suppose I am a fan of “brooding” wines.

The first, and the best of the three (in my, and my server’s opinion) was the 2016 Barbera blend from Carlin de Paolo from Piedmont in Italy. It landed a strike on the corner of rich and brooding. The accompanying coaster described the wine thusly: “black cherry, and cranberry notes compliment orange peel, white chocolate and herbal notes…” I don’t disagree. But I add that it smelled like leather, tobacco, and wild boar, with hints of human excrement — specifically after a night where you might have had too much wine or Pu pu platter and still have a slightly queasy stomach. And I mean that in the BEST way possible. It’s a scatological fetish I have with certain wine scents. Real wine writers more appropriately refer to this smell fondly as “barnyard” or “forest floor,” but why euphemize? 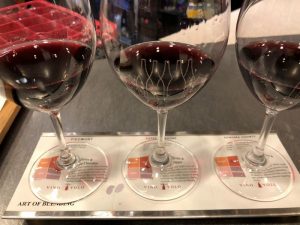 Before I tasted wine number two (which has decidedly less “number two” on the nose), a couple from Little Rock sat down next to me at the bar. These two have visited a few Vino Volos and love them. They’ve got the gate number memorized where you can find the Vino Volo at the airport in Dallas. The gentleman was signed up for the Vino Volo app, which offers you an “off the list” $2 taste of something special and an “amuse bouche,” which today was avocado. He saw me taking tasting notes on the Hotel Boulderado note pad that I stole out of my room. I also stole the small sewing kit from the room. I’m sorry, Hotel Boulderado. The couple had spent the past weekend drinking Veuve Clicquot and other fancy wines at my hotel’s bar. We talked wine, air travel, and Boulder. It just so happened that he was one of the people responsible for reimagining the Boulder Theater, where Graham Nash had played the night before. As the president of the board of an aspiring to be similar theater in Turners Falls, it was serendipitous to find someone with parallel passions.

The second wine, and the second best wine, was a Grenache heavy 2015 Cote du Rhone from Paul Jaboulet Aine. It was described by its corresponding coaster as having “bright notes of blackberries … this wine finishes with hints of cedar and white pepper.” I gotta up my white pepper game. I always thought the white stuff next to the pepper was the salt. This was a classic Cote du Rhone, with a distinct dustiness and a hint of cocoa powder. It was another excellent treat in this airport oasis.

The veteran Vino Volo couple speedily sent a second round down the hatch, so they could catch their flight back to Little Rock — with a likely layover at the Dallas Vino Volo. A woman stormed in looking for a martini. There are no cocktails on the list. She raced out. “Sounded like she needed an emergency martini,” I said to the wine snob at the end of the bar. “She must have just gotten off a turbulent flight,” he said back. She seemed shaken, but not stirred. Another woman came in and looked at the small, local, craft beer list and grumbled under her breath that they didn’t have any Coors. We were in Denver. Tap the Rockies.

The final wine in the pre-flight flight was a Merlot blend from Gundlach Bundschu in Sonoma. A Merlot blend of what? They don’t say. Come to think of it, same with the Barbera. One can safely assume that the Cote du Rhone is Grenache, Syrah and Mourvèdre. But what are they blending with the Barbera and this Merlot? I have my guesses, but I’m imagining a lot of casual wine drinkers come into this place. Maybe they’d like to know? While Gundlach Bundschu is a well-known name in the wine world, this was underwhelming to my palate, too fruity and chocolatey, but a very good stereotypical representation of a red California blend. What can I say? I’m an Italian-American, Francophile wine snob.

Stumbling upon Vino Volo was like getting bumped to first class. With its mildly generic, but inoffensive, décor and not-overly-irritating smooth jazz soundtrack, it felt reminiscent of the days when people would get dressed up to fly. Though there were a lot of jeans and t-shirts and shorts in there. Myself included. Well, not the shorts. I have not sunk that low. Shorts are for the home, the beach, and for the embarrassing times one decides that they are going to exercise in public. But there was class in their glass. The wines are better than you see in most restaurants, let alone most airport restaurants. I was happy to find it, sandwiched between all the Sbarro’s and Chick-fil-As and Starbuckses. Too bad there was no Vino Volo for my layover in Charlotte. There is one in Boston. Maybe I’ll reroute my flight home to Hartford and go have another wine flight at “Wine Flight” Logan.