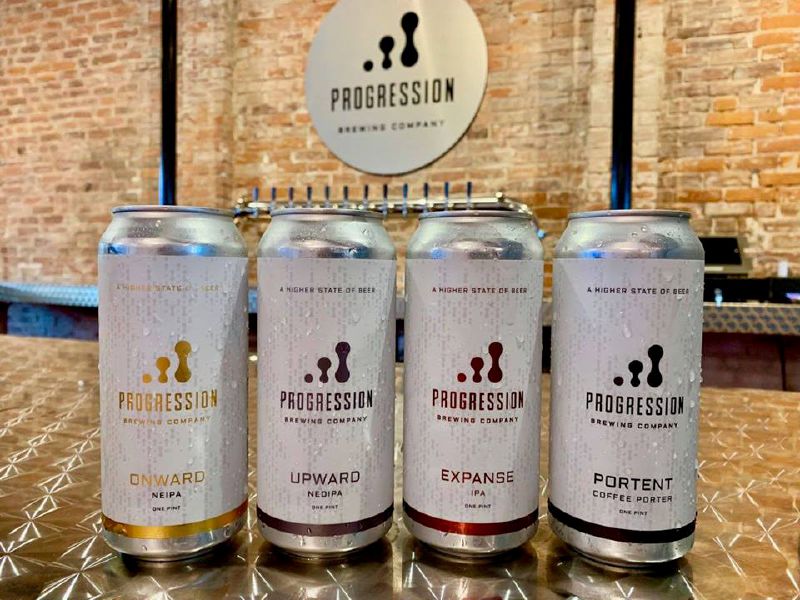 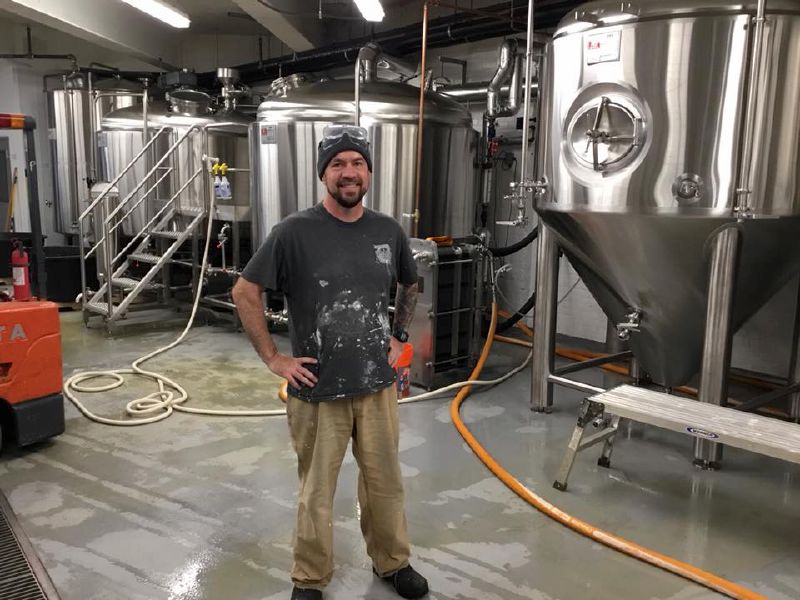 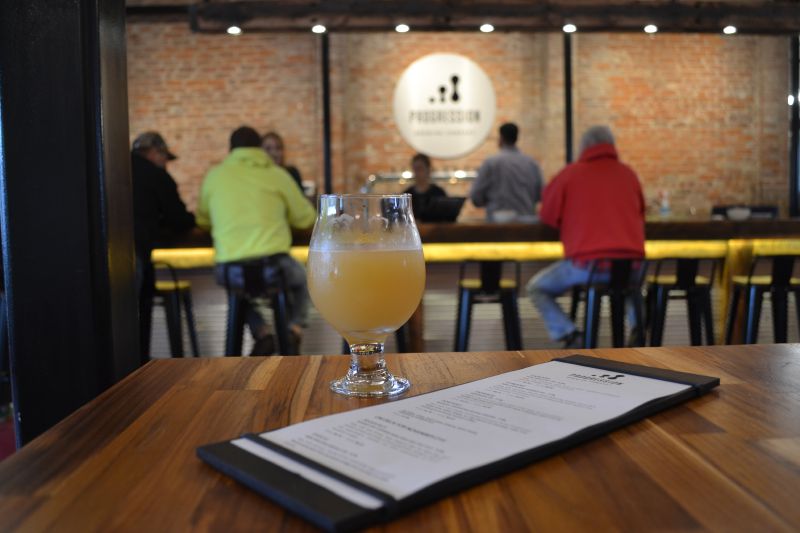 As a kid, I would sometimes wander the aisles of Don Gleason’s Camping Supply on Pearl Street in Northampton and daydream about living off the grid. In unchaperoned moments I’d climb in the tents, test flashlights, browse survival kits, and plan my inevitable, possibly permanent getaway into the woods. 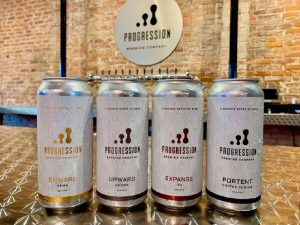 Sullivan sees the Onward IPA as Progression’s flagship beer. “I get mainly pineapple and grapefruit out of it,” he says, “and the yeast I use adds a kind of peach flavor,”

Gleason’s closed in 2016, after nearly 60 years of business. But I sat in the space last week, in the new taproom of Progression Brewing Company, and sampled a New England IPA called Onward, followed by a double IPA called Upward. Both are terrific. The wilderness still calls my name, but I’m not eager to flee from such cozy places and delicious local pints. If I further delay my escape from civilization, it may be due to the promising future of craft beer here in my hometown.

Northampton has had a craft beer scene for decades now, and it’s grown a lot recently. But the city needed a place like Progression.

Northampton Brewery is a great place to hang with a well-made beer, but it is first and foremost a restaurant. Brew Practitioners and Building 8 in Florence are fun places to stop in, but not on foot from downtown Northampton. Bear and Bramble, a Belgian-focused nano-brewery based in Florence, makes excellent beer for local restaurants and bottle shops, but doesn’t open its facility to the public.

Enter Progression brewer Todd Sullivan and owner Drew Starkweather, who have reimagined the Gleason’s space as a bright and welcoming craft beer taproom. Progression Brewing opened its doors on November 9 with four beers available on tap, and several more in the pipeline. Visitors can purchase 10-ounce or 16-ounce pours. The taproom also sells 4-packs of cans and serves a limited food menu. It is open Wednesdays from noon to 8 p.m., Thursdays from 4 to 9 p.m., Fridays and Saturdays from 4 to 11 p.m., and Sundays from noon to 6 p.m.

On the day before opening, I stopped by to check it out. The taproom was full of workers vacuuming, moving furniture, carrying ladders, and criss-crossing the floor with crowbars and tape measures, scanning for final touches. The space is airy but comfortable, and nicely laid out, with several huge tables, a nice long bar, and plenty of seating that includes four comfy black couches with throw pillows. 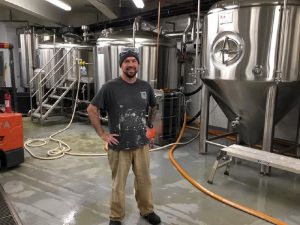 Progression brewer Todd Sullivan is all about aromatic beer. “When I pour a glass and plop it down at the bar, and you’re sitting six feet away, I want you to be able to smell it,” he says.

In the kitchen I found Starkweather installing a thermometer on a dishwasher. The build-out has moved quickly, he said. He and Sullivan connected with the owners of the building early in 2018, but didn’t get started on construction until July. They cut in floor drains, re-poured the floors, and got the 30-barrel system up and running in a few weeks.

It’s not a huge system — there’s only room to add maybe three more fermenters — but it’s plenty big enough to start, and Starkweather told me that his focus is on brewing fresh beer each week for taproom visitors, rather than diving into distribution. Progression carries a Farmer Brewery license, which allows for off-site retail sales and distribution (as opposed to Northampton Brewery, which carries a Pub Brewery license).

Starkweather had been enjoying an early retirement since selling his successful food business in 2010 — he is the Drew from Drew’s Organics, which distributes its salad dressings and salsas nationally — but the chance to open a brewery was too good to pass up, especially once he connected with brewer (and fellow Amherst High alumnus) Todd Sullivan, who spent a decade on staff at what is now Lowell Beerworks before moving to Western Mass, where he ran Pioneer Brewing Company from 2004 to 2014.

“The first batch of beers on our new system came out even better than we expected,” Starkweather says. “I think they’re going to be very well-received.” The bar has 12 taps, which will allow Progression the flexibility to develop maybe nine or ten styles, then double-tap the most popular beers at the bar.

The Onward and Upward are both impressive IPAs: hazy and juicy, with a ton of soft citrus flavor. Progression also makes an American IPA called Expanse, which leans into a more bitter, classic West Coast style. Also on tap: an imperial coffee porter called Portent, which is brewed with flaked oats, chocolate malt, and Pierce Brothers coffee.

On November 21, Progression debuts two more beers: a double dry-hopped New England pale ale called Sequence and a New England double IPA called Evolve, both of which fall on the hazy, grapefruity end of the spectrum.

“It’s been insane in here for the past three or four weeks,” Sullivan says. “Electricians, plumbers, and roofing guys were all over the place. I was brewing these really delicate IPAs under scaffolding.”

Sullivan is all about aromatic beer. There is no fruit added to these beers — just a ton of really flavorful smells wafting to your nostrils, thanks to the hops. “When I pour a glass and plop it down at the bar, and you’re sitting six feet away, I want you to be able to smell it,” he says. “I want these aromatic as hell.”

Sullivan sees the Onward IPA as Progression’s flagship beer. “I get mainly pineapple and grapefruit out of it,” he says, “and the yeast I use adds a kind of peach flavor, which balances out the other two, with a nice silky mouthfeel. I made adjustments to the lactose and the water chemistry to get that right.” 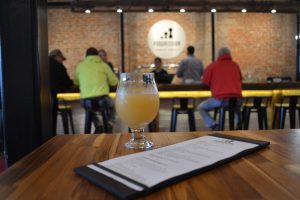 Although Sullivan is proud of the hazy, juicy New England IPA style, he wants his beers to have just a little more bitterness to them. That comes through in Upward, the double IPA, which is heavy-bodied like the Onward and slightly dank, thanks to the Columbus hops added in with the El Dorado and Mosaic hops. According to Sullivan, Upward is the crowd favorite so far, and “it won’t change whatsoever.”

Expanse, the West Coast IPA, is more bitter still. “The hipsters aren’t huge on these right now, but I’ve always loved the style,” Sullivan says, “and I wanted people to get an understanding of what IPAs were like a mere five years ago. Remember when everyone loved Arrogant Bastard?” Expanse is made with a wide array of hop varieties, including Simcoe, Citra, Mosaic, El Dorado, Centennial, and Columbus. “It’s drier, hoppier, more bitter, and a little clearer,” he says. “You can see your fingers on the other side of the glass.”

Portent, the coffee porter, puts major emphasis on the coffee. To get a lot of pronounced coffee flavor, Sullivan mashes with a few pounds of Red Eye espresso blend from Pierce Brothers, then cold-conditions the beer in the fermenter before adding even more Red Eye and steeping the batch for 24 hours.

Soon, Sullivan plans to make a Russian imperial stout, a brown ale, and a Baltic porter. “Those darker beers will fill up the tap lines nicely, so we have a nice rotation in styles,” he says. “But the first four that we did? I’m stoked. I couldn’t be happier with how they turned out.”

— After 24 years, Berkshire Brewing Company is finally able to offer full pours at its South Deerfield headquarters. Previously, the Dick Schatz Taproom was only open for Saturday brewery tours and samples. Now, the expanded taproom will be open Thursday to Sunday, pouring many of the brewery’s most popular beers as well as some experimental batches. Pints are $6; flights of four 4-ounce pours are $8. Taproom sales do not extend to packaged beer, so you’ll still have to hit up nearby retail for BBC bottles and cans.

— Craft beer makes a great stocking stuffer, and you can hardly get more on-theme than a bottle of Amherst Brewing’s annual Christmas Morning Stout, made with local coffee from Shelburne Falls Coffee Roasters. The brewery releases this year’s 22-ounce bottle on Friday, November 23 at 4 p.m., available for purchase on-site only.

— If you’re up in Greenfield, stop by Seymour the pub on Bank Row and help them celebrate five years of business with $5 pours of draft beer and cider all week, from November 26 to December 2.

— Congratulations to Springfield’s Rustic Brewing Company on the mid-November opening of their new taproom at Indian Orchard Mills! Check their Facebook page for info about regular hours and sales, very soon to be announced.