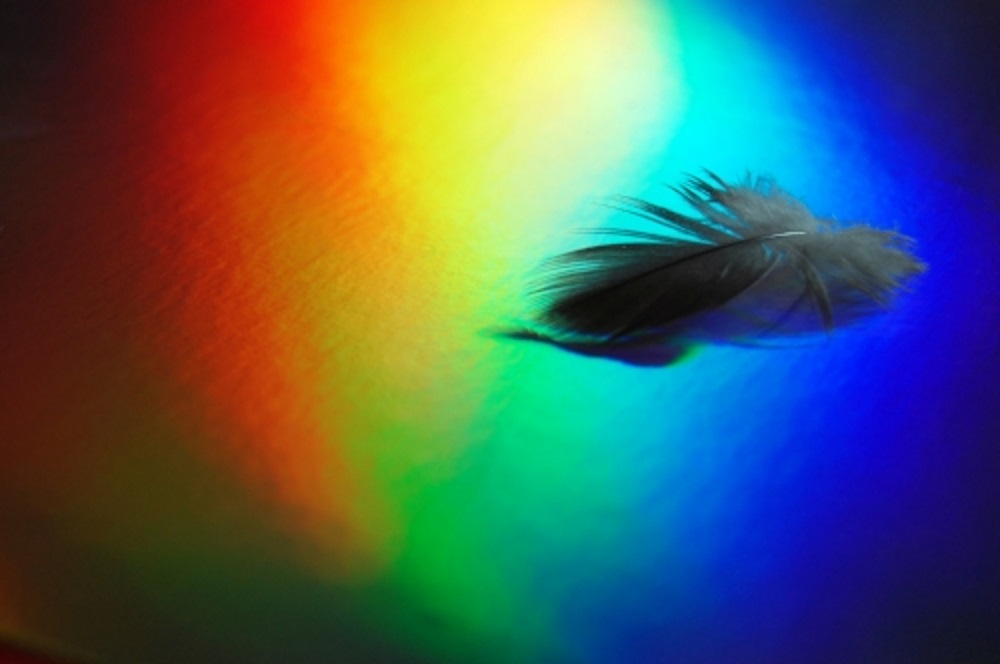 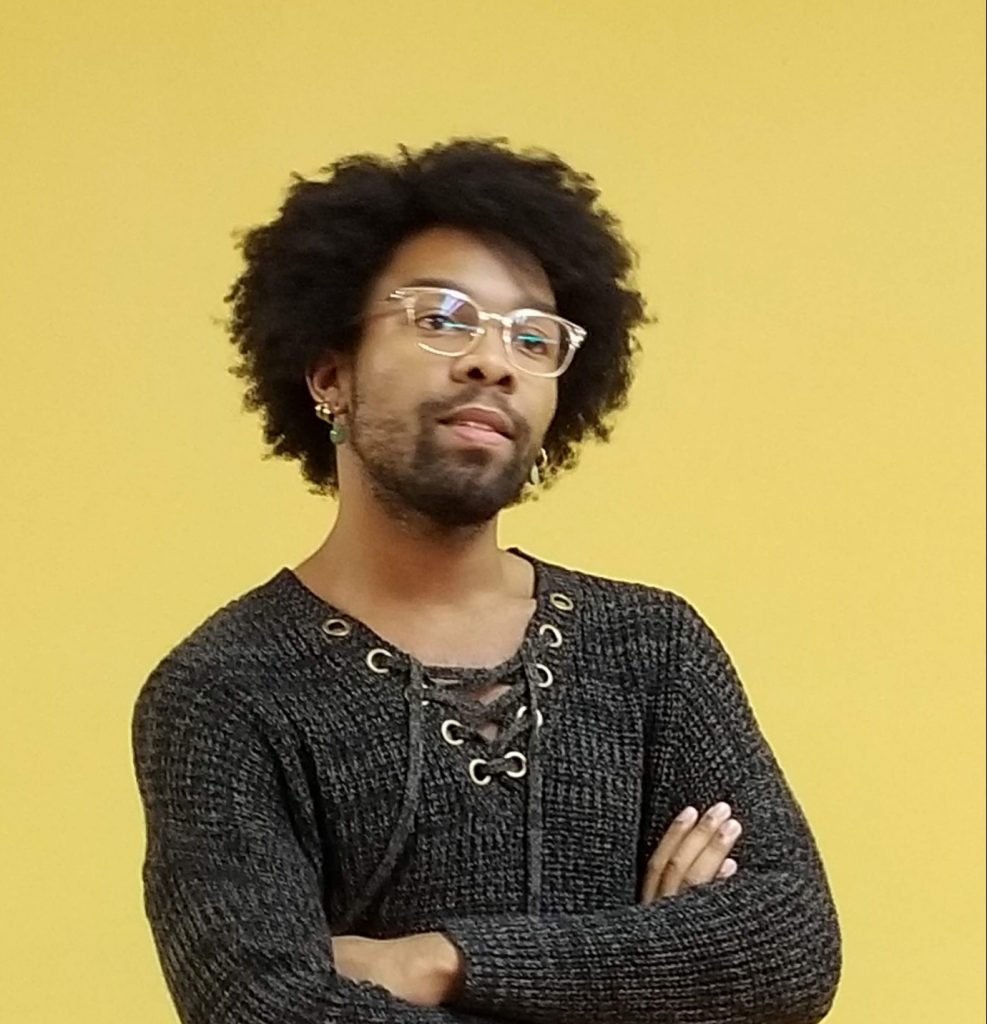 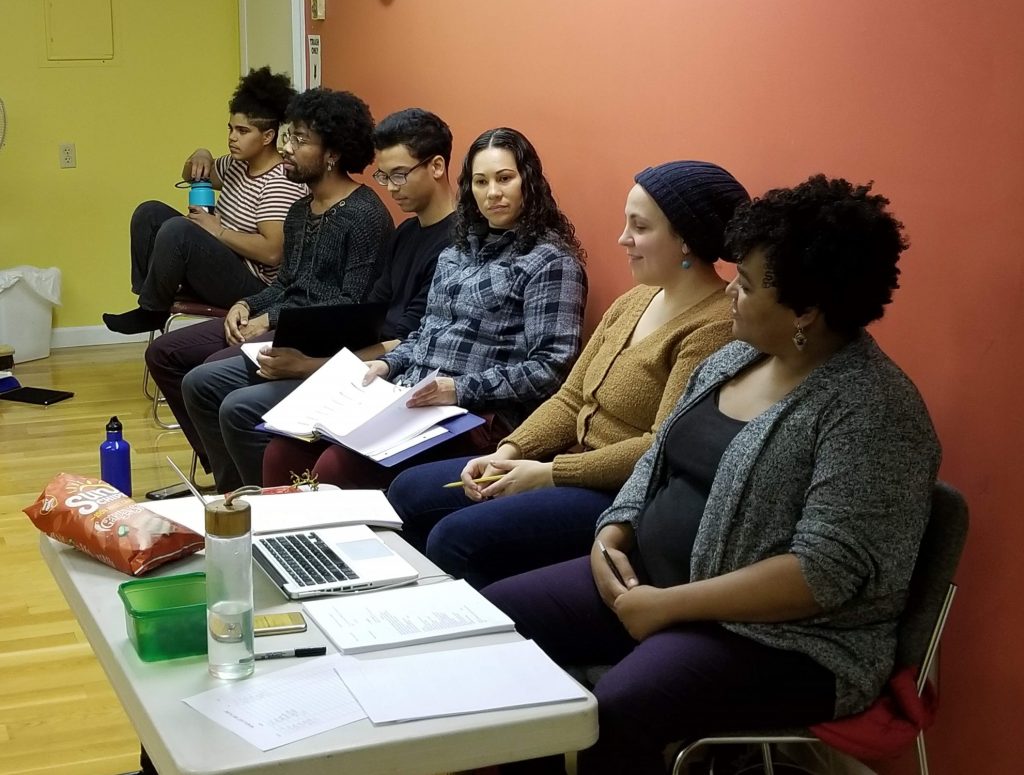 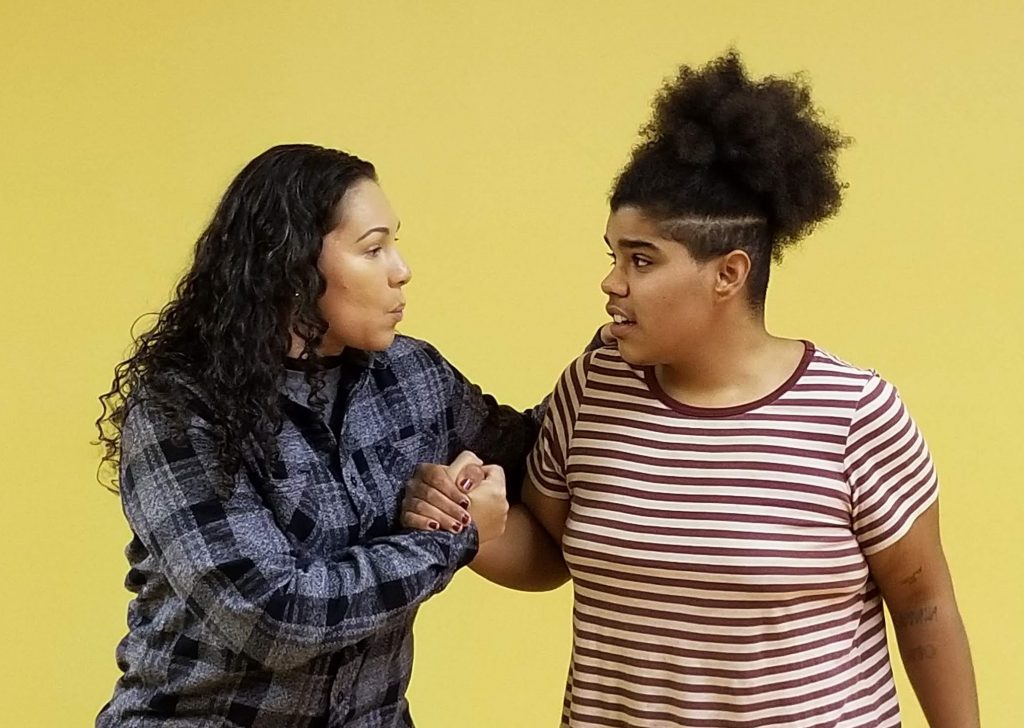 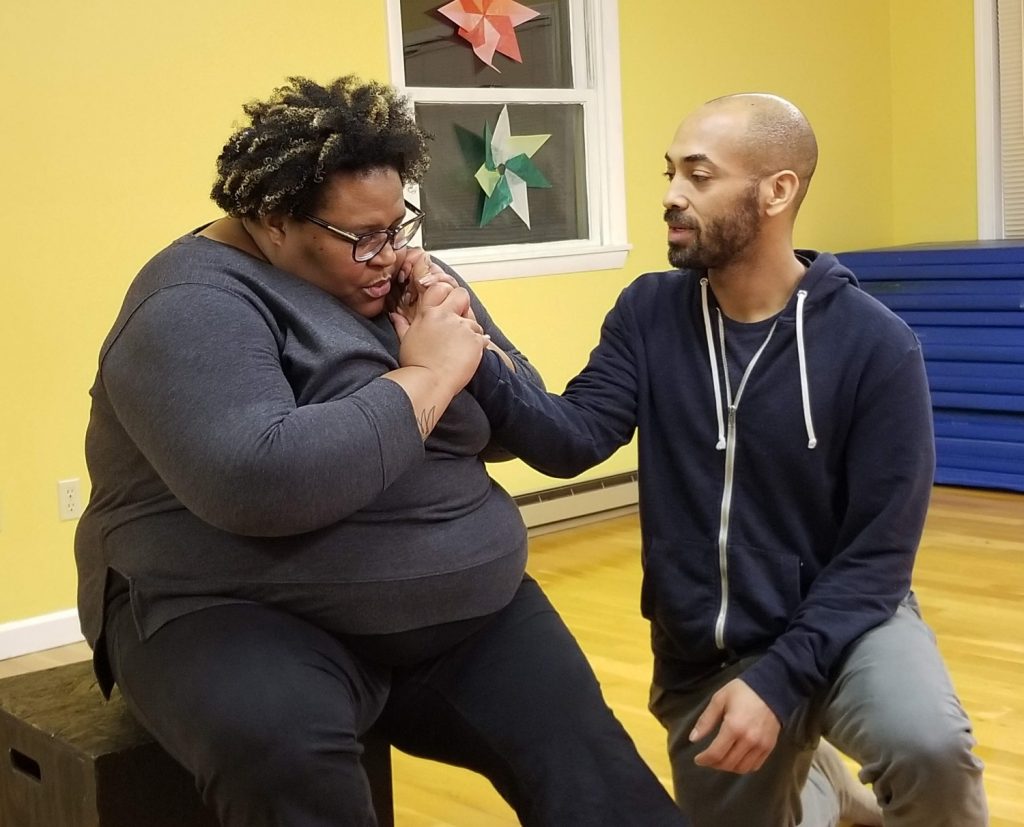 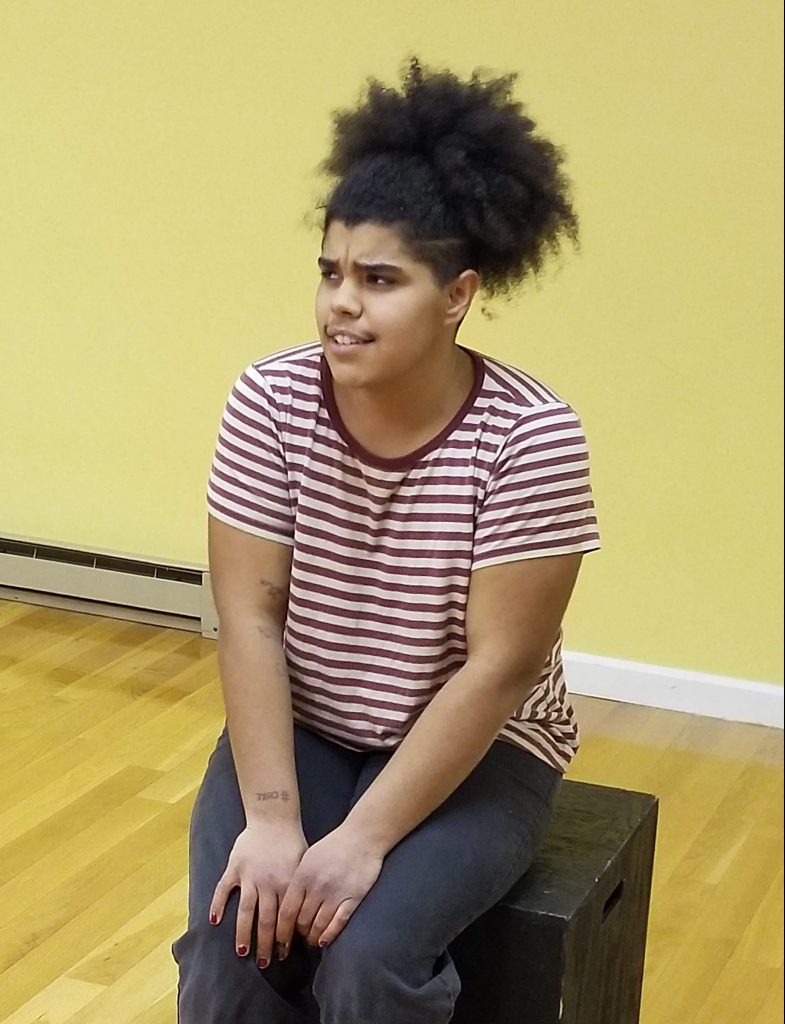 Harrison David Rivers specifies that his play When Last We Flew takes place in “a small town in Kansas (NOT Kansas City).” He also specifies that all eight characters are people of color. And that two of them are gay.

As it opens, we find 17-year-old Paul in the bathroom, one hand holding a copy of Angels in America and the other hand down his fly. Later on there’s a tornado, and some flying, but we’re definitely not in Dorothy’s Kansas anymore.

Real Live Theatre’s new production performs this weekend at the Northampton Center for the Arts. The play borrows images and motifs from Tony Kushner’s game-changing epic, including a demanding angel and young, queer characters claiming their honest identities, and it certainly echoes Angels’ subtitle, “A Gay Fantasia on National Themes.” But what excites the creators of this production most is the play’s game-changing view of its people.

I sat in on a rehearsal last month in a studio space at North Star, the self-directed learning center for teens in Sunderland. Cast members in rehearsal clothes ran through a series of dialogues as co-directors Trenda Loftin and Ellen Morbyrne watched intently, conferring quietly between scenes. During a break, I chatted with some of them. 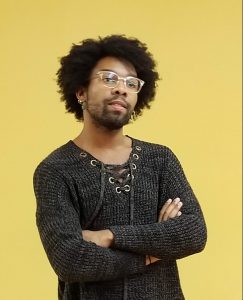 He said he identifies closely with Paul. “All his relationships are almost exactly the same as relationships I’ve had. It’s like the playwright took my life and was like, ‘Let’s make a play about Steve.’” 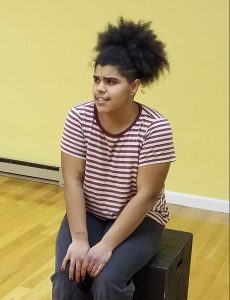 The same goes for Syl Simmons, who plays Natalie, expelled from her otherwise all-white parochial school for expressing a black point of view. “I find very prominent pieces of myself in her,” she said, having navigated a similar school before entering North Star.

She’s also delighted to be in a piece “about black teenagers that doesn’t revolve around their blackness, but just living their lives – they have to come out to their parents, they fall in love with boys in school, they have moms who want them to go to college but don’t always want to do that.”

Jacob West made the same point. It’s rare, he said, to find a play with a non-white cast “that isn’t set in the ghetto.” He, too, finds personal parallels, particularly in the play’s geography. 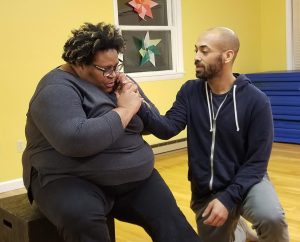 He comes from the Midwest, and told me his character, Paul’s absent father, “talks like my grandfather, the same jokes and sense of humor. Educated black people in rural areas, they exist, they’re in this place.”

Nicole Young, playing Paul’s mother, said the woman “reminds me a lot of Issa Rae’s character in Insecure,” the HBO series. It’s refreshing, she said, to see “a black female character this vulnerable and very multilayered, who takes a lot of risks.”

Like Young, Tosh Foerster is new to the cast, most of whom workshopped the play last winter. He’s also fairly new to acting – “Standup is my major thing” – and confessed to “a little bit of nerves around coming into an already-made group. But oh, man, they’ve been super-welcoming, and working with Ellen and Trenda has been an awesome experience.”

Co-directors Morbyrne and Loftin told me they were drawn to the piece for the same reasons as the cast. Loftin described it as “a queer story about people of color that finally isn’t anchored in tragedy or hardship. There’s joy and love and connections – and magic.” 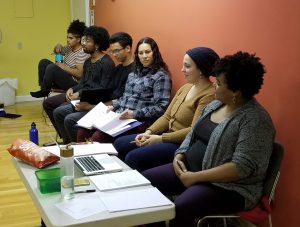 “It’s about real issues that matter to real present-day people, and yet it’s not an ‘issues’ play,” Morbyrne added. “It’s an inspiring, relatable, familial coming-of-age story that weaves in the reality of the issues that are relevant for the characters who are telling the story – neither ignoring the cultural-historical context, nor only looking at it through that lens and not seeing the rich, nuanced daily life that’s also happening.”

I asked them about how they handle co-directing, or “co-creativeship,” as Loftin termed it. “There’s a lot of power in cooperative creativity,” Morbyrne said. “It’s really useful to have multiple perspectives and skill sets and priorities and backgrounds that we can synchronize and share and shape together.”

Their perspectives and backgrounds include race – Loftin is black and Morbyrne is white. “There’s the reality of our personal experiences and social identities,” Loftin explained. Their partnership turns on “how we come to the work through those lenses, the ability to connect on those things and ask questions of each other, and then model that for other people.” 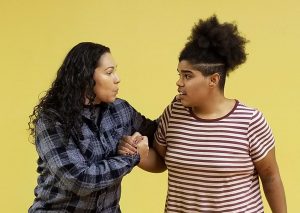 Real Live Theatre is a second-generation offspring of Serious Play, the Northampton-based movement-theater ensemble. Morbyrne and other co-founders of RLT were molded by that training, and it suffuses their group’s body-centered aesthetic, “prioritizing actors over text” – and over tech as well. All the sound effects in the show – the tornado’s winds, the fluttering of birds – are the actors’ mouth-music, and when a prop is needed on the nearly bare stage, it’s “flown” on by one of the performers.

Julissa Rodriguez, a Serious Play alumna, plays six characters, including three incarnations of the Angel figure. “I love ensemble theater!” she exclaimed, adding praise for this “beautiful ensemble of people who are passionately committed to the art of the live moment, bringing together all different voices to create meaningful work and opportunities for magic.”

When Last We Flew, Dec. 6-9 at the Center for the Arts, 33 Hawley St., Northampton. $25 or sliding scale; ticket sponsorship also available. www.reallivetheatre.net.