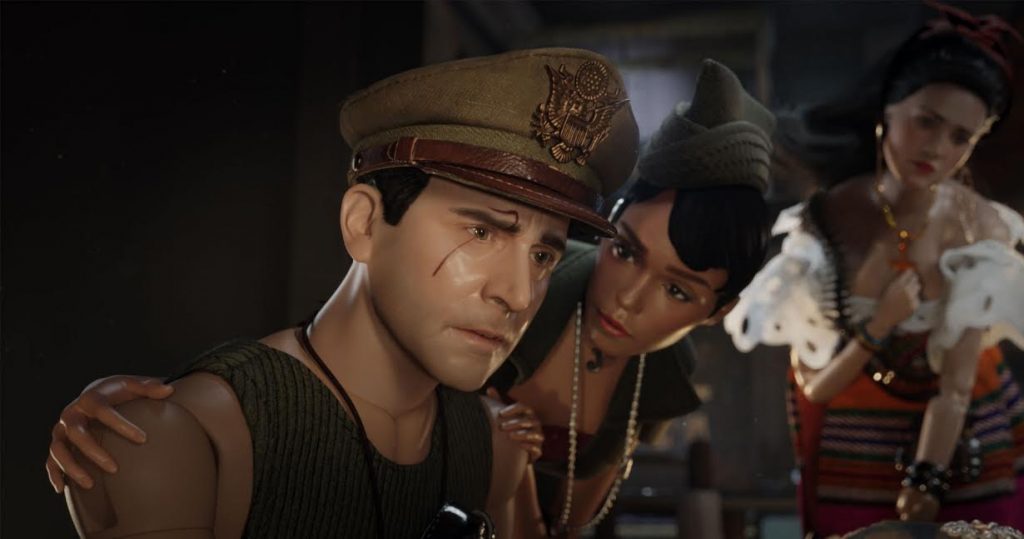 Eighteen years ago, Mark Hogancamp lost his life. That is not the same thing as saying that Mark Hogancamp died, because he didn’t. But when the Navy veteran was beaten so badly in a 5-on-1 attack outside a bar that he ended up in a nine-day coma, large parts of his past were gone forever. Memories, the ability to walk or talk — gone. Hogancamp would have to start from scratch, relearning not just the basics of life, but the basics of who he was as a person.

As one might imagine, that is probably a slow process. And as anyone who has had a drawn-out medical situation can attest, insurance can dry up pretty quickly. When Hogancamp reached the end of his state-supported rehab, he devised his own remarkable therapy to help him continue to heal. He created, in his backyard, a 1:6 scale model of a World War II village, named it Marwencol — a portmanteau made up of the names of Mark and his friends — and populated it with posable dolls that stood in for friends and family, with a heavy slant toward the powerful women in his life. He also included the attackers that made Marwencol necessary to begin with.

To help rebuild his memories, Hogancamp constructed stories within his invented town, photographing the action along the way. A chance meeting with photographer David Naugle led to a piece about Hogancamp’s photos in the magazine Esopus. Those remarkable photos, made up of toys but containing worlds, caught the eye of Los Angeles documentarian Jeff Malmberg, who made the excellent 2010 film Marwencol, chronicling Hogancamp’s unusual art/therapy and his coming to terms with the public acclaim it brought him in New York art circles.

Now comes Welcome to Marwen, a dramatized take on Hogancamp’s story from filmmaker Robert Zemeckis (Forrest Gump, The Polar Express). Steve Carell stars as Hogancamp, and in Zemeckis’ film the action figures spring to life through the magic of modern animation. The multi-talented Janelle Monáe co-stars as Hogancamp’s friend and physical therapist, who comes to life in Marwen as G.I. Julie, Nazi Hunter. The other female inhabitants of Marwen make up the commando squad that supports and protects “Hogie” on his do-good missions. The effect of the animation is somewhere between the stop-motion of Wes Anderson and the slickness of Toy Story.

But if the cast includes a welcome slate of female names — Leslie Mann, Diane Kruger, Eiza González, and Gwendoline Christie (Game of Thrones) populate Hogancamp’s worlds — the trailers for Welcome to Marwen have also been conspicuously silent on the intolerance that led to Hogancamp’s beating in the first place. The men who almost killed Mark Hogancamp did so because Hogancamp enjoyed wearing stockings and heels. The female power of Marwencol/Marwen has a richer history when the viewer knows this detail; I hope that the famously popular Zemeckis hasn’t decided to redact that part of the story in favor of a wider acceptance. To do so would add insult to Hogancamp’s lasting injury.

Also this month: Gwendoline Christie’s Game of Thrones co-star Jason Momoa (Khal Drogo) has his own new release out in the multiplexes. Playing the title character in James Wan’s film Aquaman, the impossibly chiseled Momoa’s take on an often old-fashioned hero has already given rise to a tidal wave of wine-mom memes, not all of which are as PG-13 as the film. Whether or not his character will be one of the few able to survive the disaster that was the Justice League film remains to be seen.