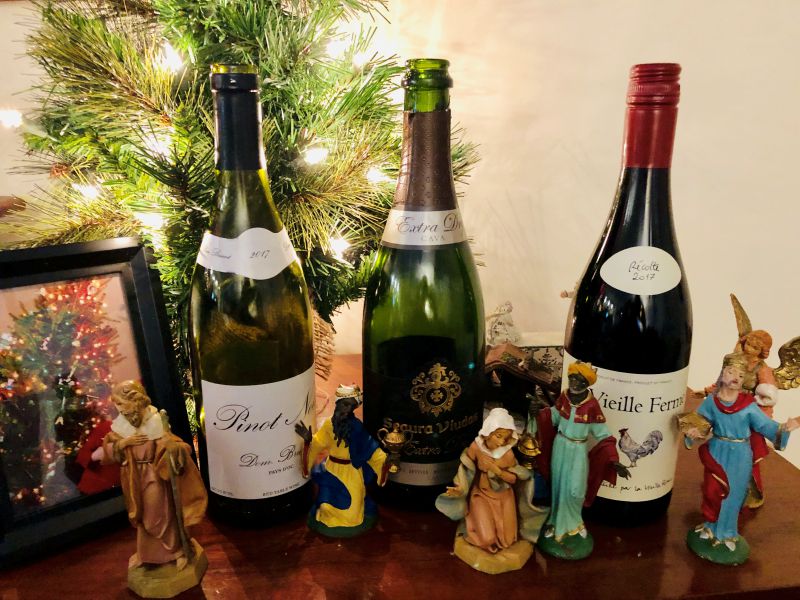 According to the Gospel of John, Jesus’ first miracle was turning water into wine. A miracle he performed at the request of his mother. His mother who, as the story goes, was subjected to the shame and embarrassment of being Jane The Virgin-ed at the hands (or perhaps the divine genitals) of Mary’s baby daddy-who was alleged to be God. Jesus (also allegedly God) certainly owed her one. And the only “one” we know she asked for was at a wedding that had just run out of wine. To help his mom and the wedding’s wine buyer out, he made a LOT of extra wine. And according to The Good Book, Jesus didn’t make (literally) 180 extra GALLONS of crap wine. He made some really good wine. In The English Standard Version of that Gospel, the master of the feast said of Chateau Jesus Wine “Everyone serves the good wine first, and when people have drunk freely, then the poor wine. But you have kept the good wine until now.”

Jesus could have given all of those wedding drunks some rot-gut swill. But, no. He went for it. Since “Jesus is the reason for the season,” maybe you should go for it. And if you don’t celebrate Christmas, go for it to spite the guy who later said to go sell all you have and give your money to the poor. Break the bank on a bottle or two of wine that is WAY out of your price range. Overspending is the result of Jesus being the reason for the season. I’ve got one “Jesus” wine and one “Mary” wine both to break the bank with. And then, three wise men of affordable wines under $10, for less of your gold. I’d say “for less of your frankincense and myrrh” but who knows what the hell those things are and how much they are worth. Joseph doesn’t get a wine. I think he’d be more of a beer guy.

The “Jesus” wine (using that word as both analogy and expletive) is the Freemark Abbey 2014 Cabernet Sauvignon. As my grandfather would have said “Cripes, it’s good.” Strong notes of dark cherry and molasses, big and beefy with a 14.25% ABV. It’s what made Napa Cab famous. Literally. Freemark’s 1969 Cab was included in the so-called “Judgement of Paris” tasting in 1976. It was at this tasting in France when California wines beat out Bordeaux and Burgundy for the first time. But unlike Pabst Blue Ribbon, which was ostensibly good enough to win a blue ribbon in the distant past but is not placing as well today, the 2014 Freemark is still excellent. There is so much bad Napa Cab out there that it’s always a miracle (thank you, Jesus!) when I get my hands on one that I truly like. But you’ll have to render to Caesar what is Caesar’s. You can find the Freemark for between $40-$50.

My “Mary” of wines is elegant but strong, serious and simultaneously celebratory, as if you delivered your firstborn unto the world but feared what that world might hold in store for him. My Mary wine is the Domaine Brut Jean Vessel grower Champagne. Grower means exactly what it sounds like — the people on the farm are the people making the wine, and they are making it on site. Many Champagne makers source their grapes from Champagne vineyards but aren’t part of the estate where they were grown. Growers usually have more of a story. The Jean Vessel estate boasts the smallest walled vineyard in Champagne — a humble queen and blessed is the fruit of its womb. This Pinot Noir heavy blend is dry, bready, bubbly and perfect for toasting or chestnut roasting. And, for an actual Champagne, it won’t crucify your credit line. You can find it for under $40.

While getting ready to host a holiday party, I gave myself a challenge. I traversed not far and followed yonder star to (SING THIS PART IN YOUR HEAD!!)

Deep inside I tried to find cheap wine at Table & Vine.” (END SONG)

I wanted three wise wines for under $10. For my lovely wife, who only drinks white, I grabbed her old standby — the La Vielle Ferme Blanc. Well, I meant to grab the blanc but I grabbed the rouge by accident. Forgive me, I know not what I do. Both the red and white are about as good a wine as you can get for the price, sometimes as low as $6 or $7. It’s made by the makers of Chateau Beaucastel, whose Châteaneuf-du-Pape can go for around $80. It’s got a chicken on the label so my wife always calls it “the chicken wine.” It’s a wise buy.

My second Magi wine for under $10 was the 2017 Domaine Brunet Pinot Noir from the Pays D’Oc region of France. It’s got what I describe as a dusty mouthfeel with some hints of blueberry. I’ll also say it’s got some notes of frankincense, even though I have no idea what that smells like or frankincisley, what it even is. I’m going to assume it is the name of the doctor and not the monster. Now I’ve got some Halloween in my Christmas. But suffice it to say this $10 Pinot from France is pretty good. Less in your face than a California Pinot of a similar price. It’s more meek and mild.

And my third wise buy is a go-to cheap wine for me, Segura Viudas Cava. I’ve taken this wine with me through field and fountain, moor and mountain. Cava is Spanish sparkling wine. Is it Champagne? No. Is it usually $20 cheaper and still celebratory as all get-out? Is the Pope Catholic? I usually go for the Brut, but the one on sale was an Extra Dry. Keeping with the goal of being as confusing as possible, the wine world has designated Brut as more dry than Extra Dry. Meaning Extra Dry is a little sweet. I still liked it. I had this Cava directly after the so-called “Miami Miracle,” and even this despondent Pats fan had a fun time at the party, thanks to the wine’s effervescent encouragement. But I prefer my “miracles” to be of Jesus’ first kind. Also this wine pairs well with tuna that is not “Dolphin-safe.”

Whether or not you celebrate the birth of this ancient winemaker, you are likely to find yourself at or around a few of his birthday parties. Splurge on the good stuff because ‘tis the season. Or go for the good cheap stuff. Jesus also came to bring good news to the poor.