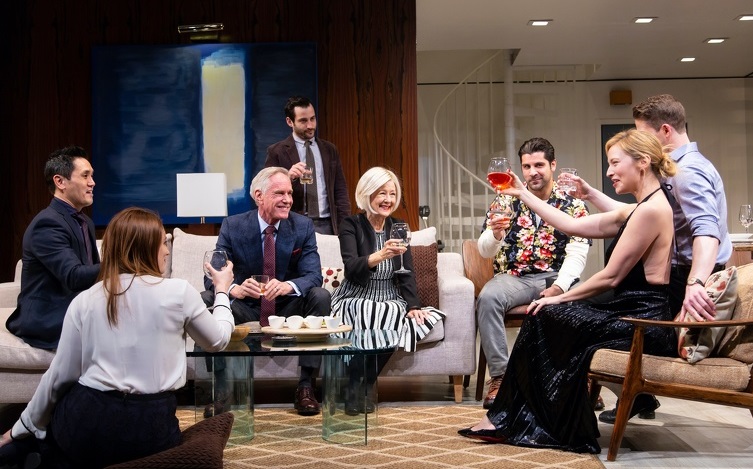 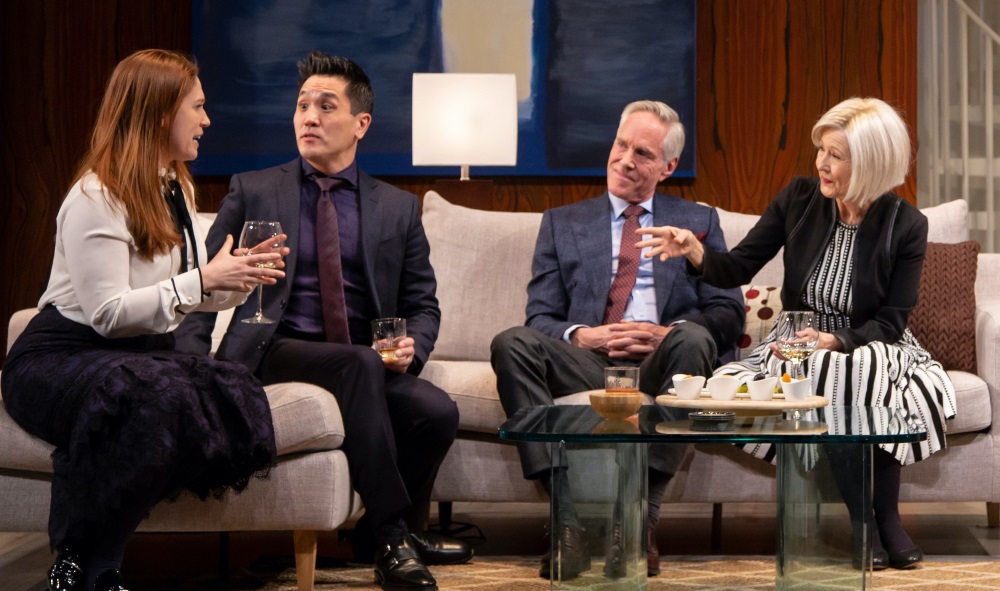 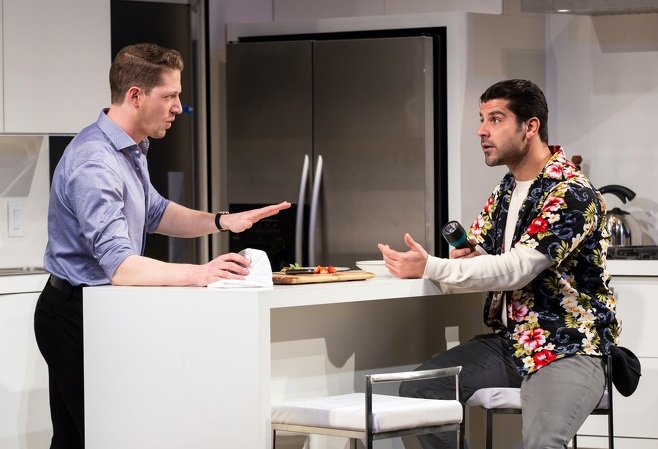 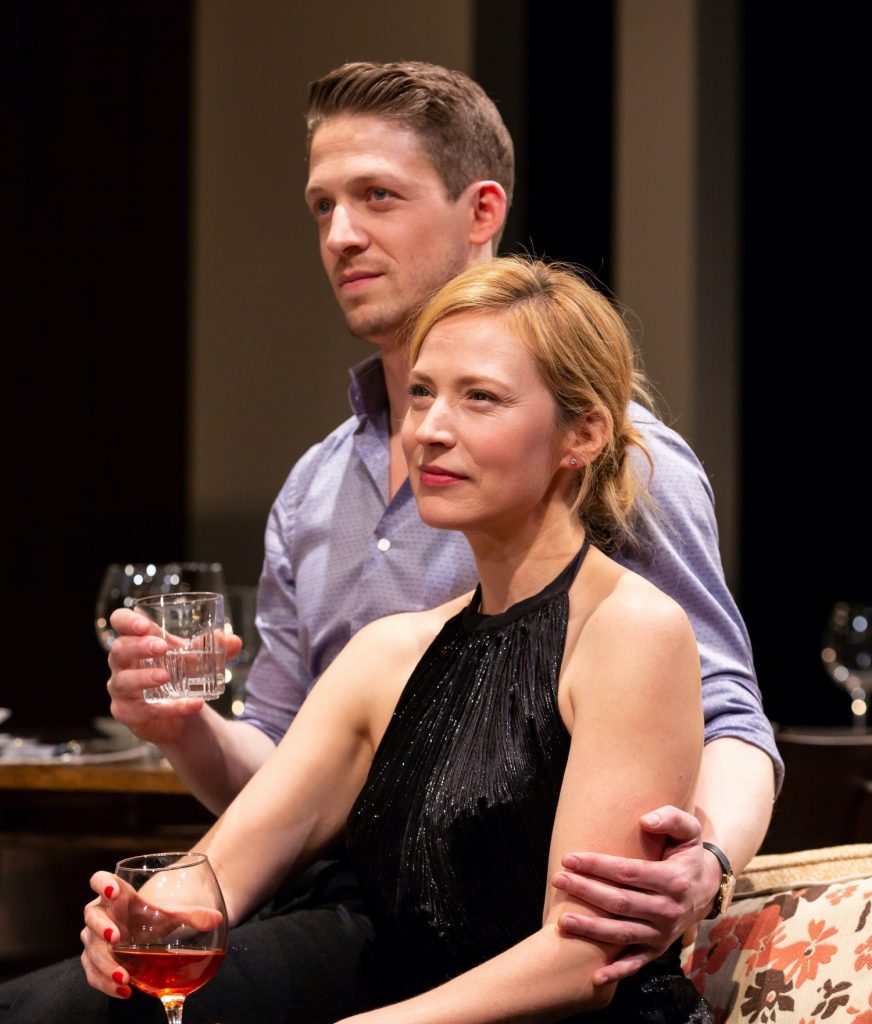 In a program note for The Engagement Party, Samuel Baum says his play is “an exploration of secrets and lies.” Which puts it right in his wheelhouse, as his credits include the TV psycho-crime drama Lie to Me and the movie Wizard of Lies.

He says he’s also interested in the notion of “how in relationships it takes years to build trust but only seconds to destroy it.” Those seconds quickly count down in this brief, absorbing play, receiving its premiere at Hartford Stage through Feb. 3. 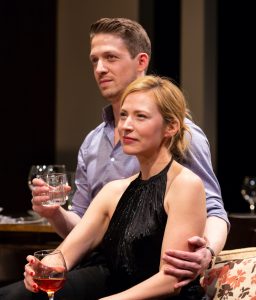 Josh and Katherine (Zach Appelman and Beth Riesgraf) are throwing an engagement party for themselves in their super-swank Park Avenue apartment. (Alexander Dodge’s set rotates between the stylish living/dining-room, the white-on-white kitchen and the glass-walled upstairs bedroom.) The guests are Katherine’s parents and the betrothed couple’s four closest friends.

After introductions, drinks and banter – an opening that recalls old-style drawing-room comedy – the party moves on to dinner, where the table’s gleaming crystal is outshone by the six-figure diamond on Katherine’s ring finger. When she passes it around for everyone’s awed admiration, it suddenly and mysteriously goes missing.

A thorough search is fruitless, and Josh’s paranoid suspicions kick in. Did someone pocket it, and if so, who?

Was it left-leaning Alan, who donates his disposable income to the poor? Or Kai, whose request for a favor from Josh has been rebuffed? Or perhaps it’s Kai’s wife Haley, who gets awfully guarded about the contents of her purse. 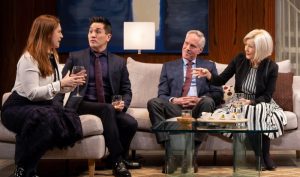 For a time, the play becomes a whodunit. Most of the suspicions turn out to be red herrings, but the shock waves dredge up old secrets and the lies that have kept them buried. These, as the play rounds a corner into the realm of dark revelations and painful home truths, go to the origin and heart of Josh and Katherine’s relationship.

Issues of wealth and class are also at work here. Katherine, blonde and sleek (Riesgraf bears a striking resemblance to Cate Blanchette), comes from monied WASP privilege, while Josh, edgy and Jewish, has scrabbled his way up from working-class Brooklyn to a hedge-fund position with million-dollar bonuses. When his hard-won world tilts, he loses his balance, and risks losing far more than the value of his fiancée’s ring.

Darko Tresnjak’s production gives pace to the plot and his engaging cast take the sudden turns effortlessly. Appelman and Riesgraf make a believable contrast as the leading pair, Katherine comfortable in her skin while arriviste Josh’s is a bit itchy and ill-fitting.

As in the classic mystery-thrillers the play echoes, Baum’s supporting characters are formed from qualities that guide the plot rather than personalities that inform it. As the parents, Richard Bekins is amiably pompous, Mia Dillon self-effacingly sweet; Anne Troup gives Haley a defiant fragility, balancing Brian Lee Huynh’s volatile resentment as Kai; and Teddy Bergman’s Alan is appropriately tweedy and caustic. 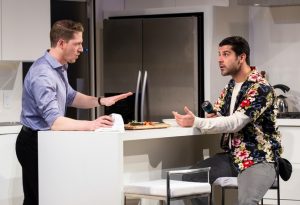 The playwright’s sympathies are clearly not aligned with the wealth and privilege most of the characters represent. The only non-suspect among the couple’s friends is Johnny (Brian Patrick Murphy), Josh’s ebullient boyhood pal from the old neighborhood, whose entrance line is “Fuckin’ A!” and whose unpretentious candor casts an unflattering light on the party’s polished sophisticates.

In the end, my response to The Engagement Party was that it’s too formulaic – despite its merging of three distinct dramatic formulas – too plot-driven, despite its socio-economic commentary and emotional crises, and too clichéd in its dialogue (Alan’s capitalist-mocking barb “A rising tide lifts all yachts” is hardly original). The opening-night audience seemed split. The jokey banter at the top got laughs from about half the house, the plot twists drew both startled gasps and knowing chuckles, and the traditional first-night standing ovation was half enthusiastic and half dutiful. For her part, my companion that night pronounced it “riveting.”