The Beerhunter: Shake Your Cabin Fever with a Taproom Day Trip 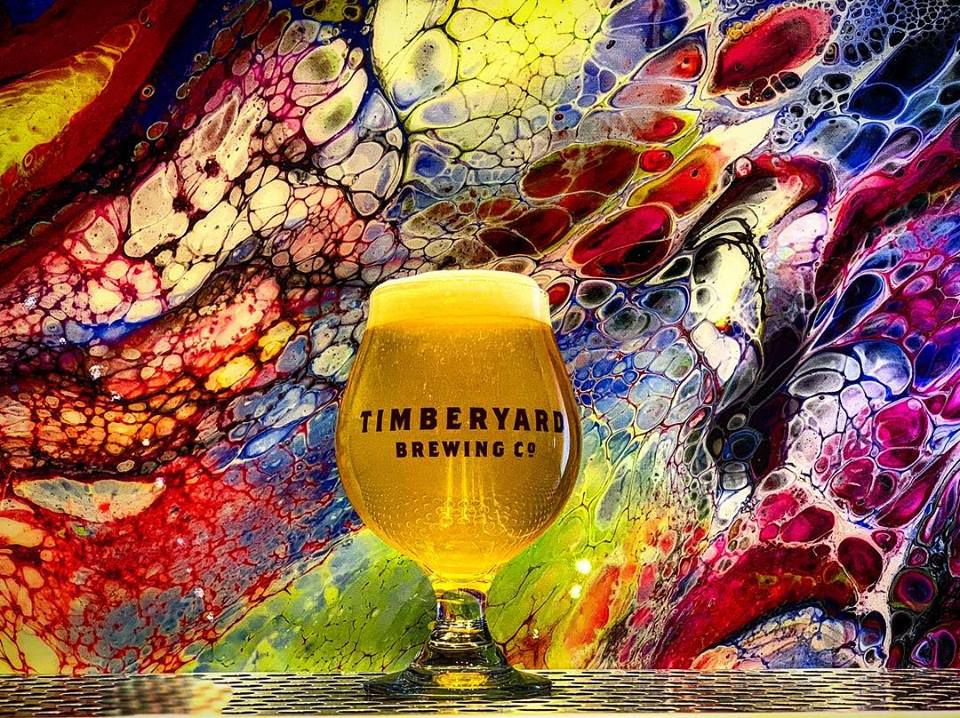 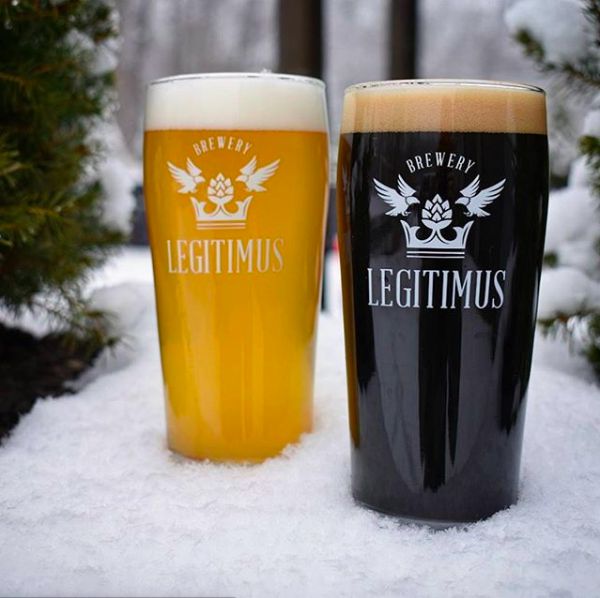 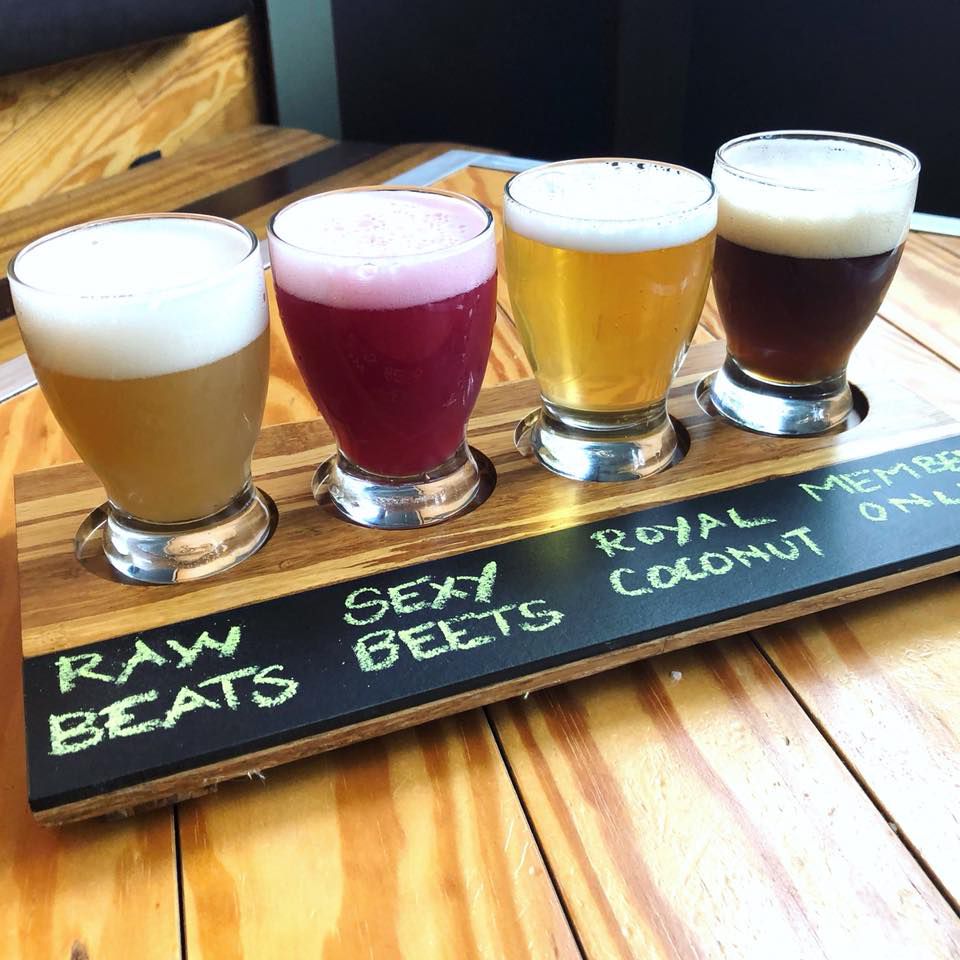 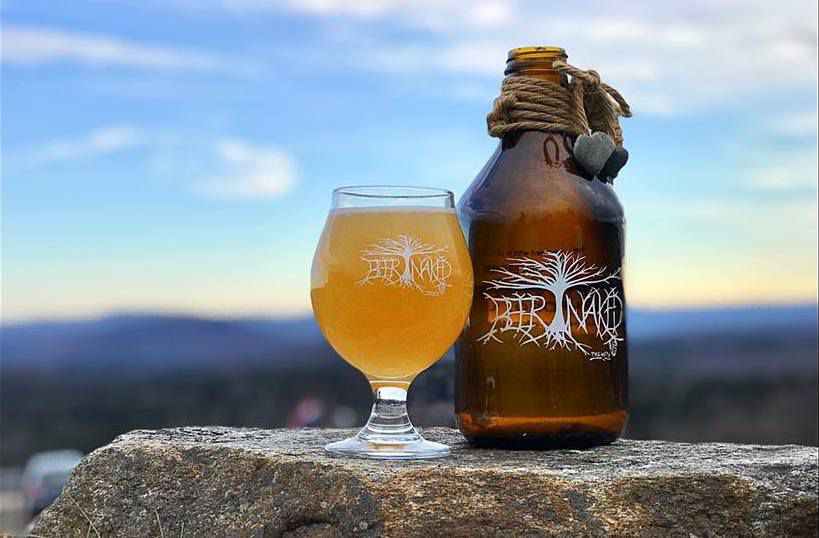 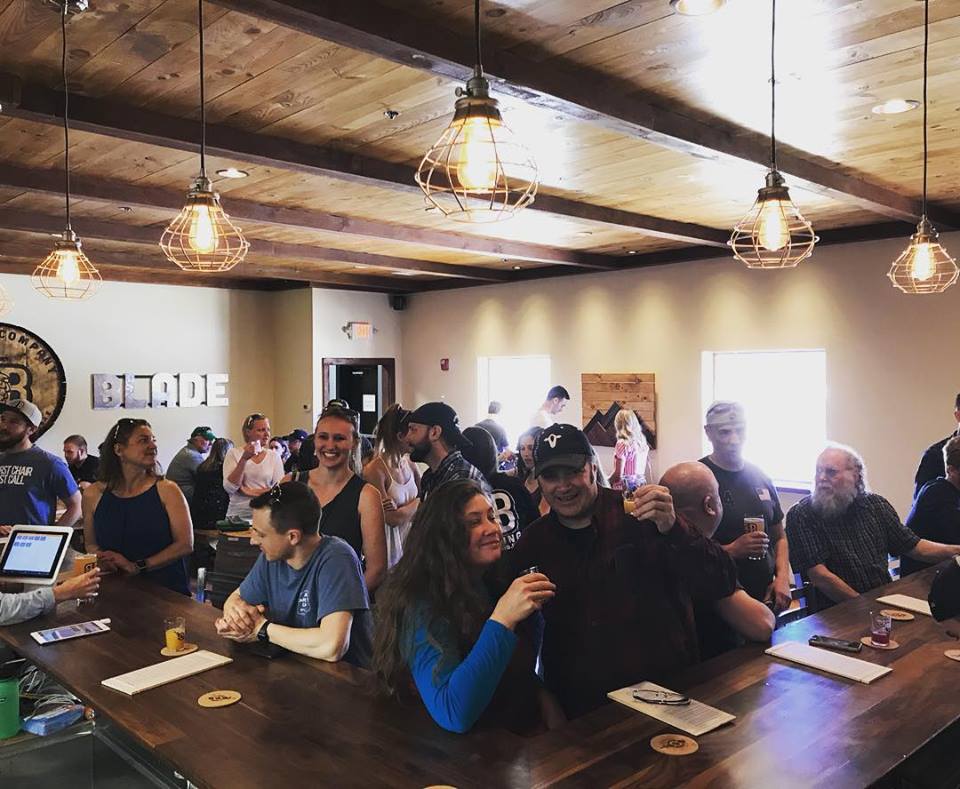 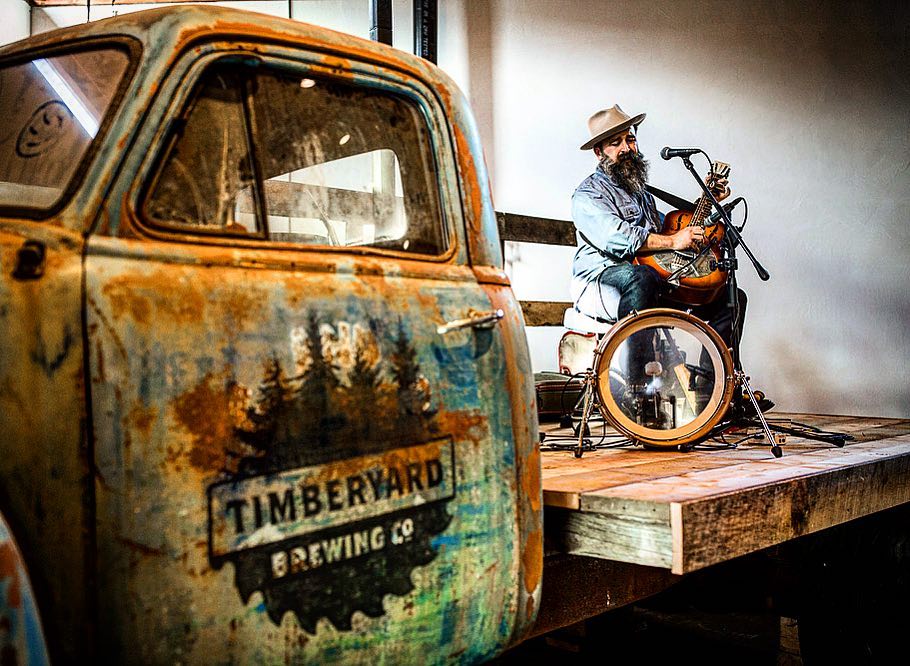 It is right about now, during the shortest month of the year, that I have sat through some of the longest evenings of my life. Cabin fever is no joke, even if your cabin comes equipped with a fire, good books, and a stockpile of craft beer (plus some loved ones, I guess).

February is cold, wet, and boring enough to make you pine for a quick spring thaw. It will come. Until then, remember that most breweries are open, and those valiant taproom employees could use some company. If you’ve got the winter blues, consider breaking out of your bunker and hitting the road (responsibly, please) to visit some taprooms.

Might I suggest a few that are slightly further afield? Here are five that are worth the drive: 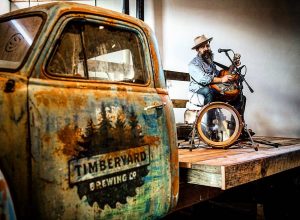 Timberyard opened in mid-October, making it one of the newest breweries in the state. Run by childhood friends Matt Zarif and T.J. O’Connor, Timberyard’s taproom is a family-friendly joint in a high-ceilinged 3,500 square-foot renovated lumber building large enough to host indoor live concerts every weekend (the music stage is built into the back of a converted 1951 Chevy pickup truck) and local art shows.

Although the taproom opened with four beers on tap — a session IPA, a pale ale, a New England IPA, and a chocolate stout brewed with vanilla — the plan is to introduce more than a dozen additional beers in coming months. Word on the street is that brewer Zarif — a former co-owner of Stone Cow Brewery in nearby Barre — may soon do some barrel-aging and try his hand at making soda and kombucha. Timberyard is also planning to do a numbered series and some more experimental brews a little down the road.

Timberyard pours beers on draft, fills growlers, and recently began canning as well. If you’re hungry, a small menu is available with pretzels, cheese plates, and snacks including pickles brined with hops. The brewery is in the small Pike-adjacent town of East Brookfield, next to Sturbridge and Charlton, which makes it a worthy stop on a regional taproom crawl. Tree House is nearby, but I recommend spending your dollars at newer and smaller businesses, such as Altruist Brewing Company in Sturbridge and Lost Towns Brewing in Hardwick. 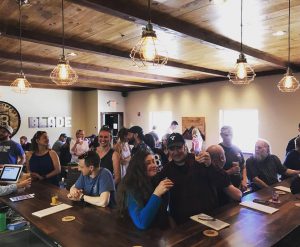 Founded in 2018 by recent college graduates Trevor Bonnette and Jesse O’Bryan — both former homebrewers — this ambitious new brewery is located on an industrial drive outside the center of Keene. Those who aren’t in the know could easily miss it, but the taproom is well worth a visit.

Bonnette and O’Bryan have cited breweries like Trillium and Tree House as inspirations, and their mostly-successful collection of beers shoots for the moon. When I stopped in a few months ago, I tasted a blueberry porter (which, thankfully, wasn’t too sweet) as well as a nice, mellow sour IPA brewed with vanilla beans and dry-hopped with Pekko, a deep-pink and silky smooth sour double IPA aged on black and red currants, a crisp and classy Pilsner, and an imperial peanut butter stout that leaned into the peanut butter, big time.

There are a few picnic tables out front. But this time of year, hang out inside, where you’ll find cards and games on each table. In addition to selling 4-pack cans, the brewery also revamped and expanded its food menu a couple of weeks ago.

If you’re heading north from Massachusetts to visit Branch and Blade, consider rounding out your day trip with a stop in Brattleboro, where you can get a flight of great local sour beers at Hermit Thrush Brewery or small-batch beers made in-house at Whetstone Station Restaurant and Brewery. 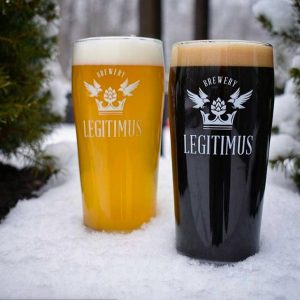 The small town of New Hartford should probably be called Old Hartford, since it was incorporated 64 years before the capital city, but whatever. To me, what makes it “new” is Brewery Legitimus, the 7-barrel craft brewery that opened in November 2016 in a 3,500 square-foot former factory building on Main Street.

The beer at Brewery Legitimus is great, with a focus on Belgian and American styles. But this brewery also deserves a visit for its large and welcoming taproom, which has board games, local art that rotates every three months, and large, handcrafted farmhouse table seating. Owners Chris and Christina Sayer also regularly invite a food truck to park outside, and welcome taproom customers to bring food from home as well. Live music and other events — including the occasional yoga session — seem to have done a lot to knit this place into the community.

The beers I’ve tried at Brewery Legitimus are all really flavorful and well-balanced, from the Belgian strong ale called Satan’s Kingdom (named for the nearby state recreation area), to the refreshingly non-hazy Illegitimus double IPA, to the Helles Yes! helles lager and the Chelson American stout.

According to my bartender, the brewery’s best-selling beer at the moment is a juicy New England-style IPA called Dr. Strangehaze. But the beer list really runs the gamut, from sours to pilsners to blonde ales to saisons, so I recommend some open-minded sampling. The taproom offers flights, 12- to 16-ounce pours of most beers, and the option of a smaller 6-ounce pour, as well as crowler and growler fills.

There are more great breweries in the downtown Hartford area. But for a day trip that includes Brewery Legitimus, consider staying outside the metro area and hitting up Firefly Hollow Brewing in Bristol or Relic Brewing in Plainville — each of which are a half-hour drive from New Hartford. 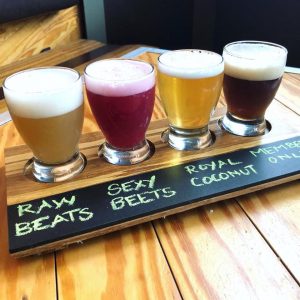 Troy is a little too distant for some Valley dwellers to appreciate, but the small city just above Albany has been seeing new business move in over the past decade. Start-ups and boutique shops may be attracted to the Victorian architecture and riverside views, but Troy has always kindled a lot of hometown pride in its long-term residents.

You’ll find a strange but gratifying mixture of both types at places like Rare Form Brewing Company, which opened on Congress Street in 2014. Run by Seattle transplant Kevin Mullen, Rare Form’s small but cozy taproom offers a variety of rotating experimental draft beers from its 5-barrel system (plus mainstays like the Raw Beats IPA and the Karass Porter), as well as locally-sourced bar snacks and occasional pop-up restaurant events.

The taproom sells flights, pints, and crowlers. The bar includes a nitro tap and two guest taps, plus a wine, cider, and kombucha option. The beers I tried ranged from good to great: a deliciously smooth German-style altbier called Altgeist, a fun sour beer made with pears and thyme called Pears of Immortality, a Mexican-style lager called Confetti, and a solid hazy double IPA called Moxie.

Rare Form has local artists design custom posters celebrating each beer, and those posters are for sale at the brewery (all profits go to the artists). Browsing the walls reveals some creative beers from the past. The restrooms, for example, are decorated with posters for a melon sour ale aged in oak barrels with overripe cantaloupe, a coconut porter aged in rum barrels, and an imperial Baltic porter made with sweet potatoes and molasses.

If you make it to Troy, consider rounding out your visit with a pint at Brown’s Brewing Company, which has been cranking out some regionally popular beers since 1993. You can find the Brown’s taproom on nearby River Street, offering sizeable lunch and dinner menus. And keep your eyes on Collar City Brewing, which plans to open its taproom soon in a former baptist church on Congress Street. 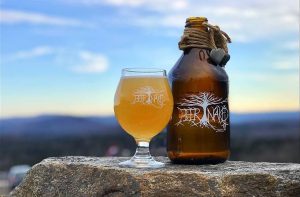 This craft beer operation got its start in 2015 by piggybacking on Pizzapalooza, a popular restaurant in Wilmington, Vermont. Partners Jason Petrelli and Sara Jasinski quickly outgrew the space, but were able to move a few miles up the road to re-open Beer Naked, with brewmaster John Watson, in summer 2017 at a cool historic spot: the former Skyline Restaurant on top of Hogback Mountain, along Route 9.

The beautiful 100-mile view is reason enough to check out Beer Naked. This taproom — which sell pints and flights, as well as crowlers to go — is one of the most scenic places you could hope for while drinking a beer. The space has good bar seating, several tables, an indoor hammock, a piano, a fireplace, and a nice big deck.

In addition to the wood-fired oven here, you can also usually get food from the pop-up run by Andrzej’s Polish Kitchen. Enjoy the view and the food — just be aware that your phone will be on extended network up here, and it’s cash-only (with an ATM at the entrance).

If you want to make a day out of southern Vermont beer, but you’ve done the Brattleboro brewery circuit, drive a half-hour west from Marlboro instead. In downtown Bennington, check out a cool nanobrewery called Harvest Brewing, which opened in 2016 with small-batch beer and a great bar menu. Older Bennington mainstays like Northshire Brewery and Madison Brewing Company Pub and Restaurant may be worth a stop-in as well.

Or, drive just 15 minutes south from Beer Naked to find J’Ville Craft Brewery, where brewer Janice Stuart sells samples and growlers all year. Since J’Ville shares a property with Honora Winery, Stuart’s taproom serves both beer and wine, all made on-site.