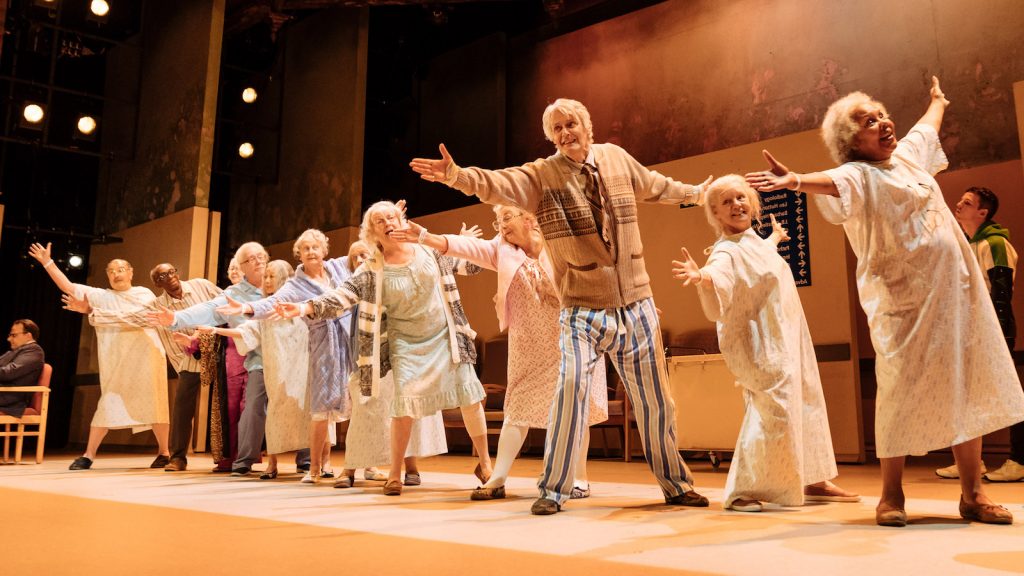 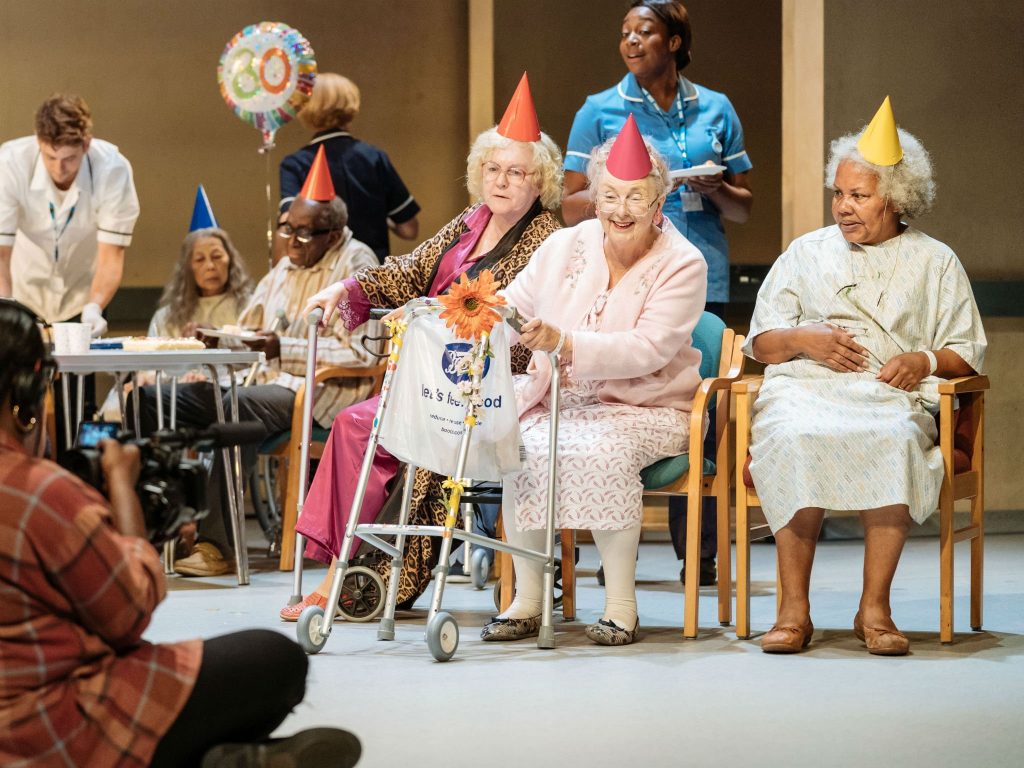 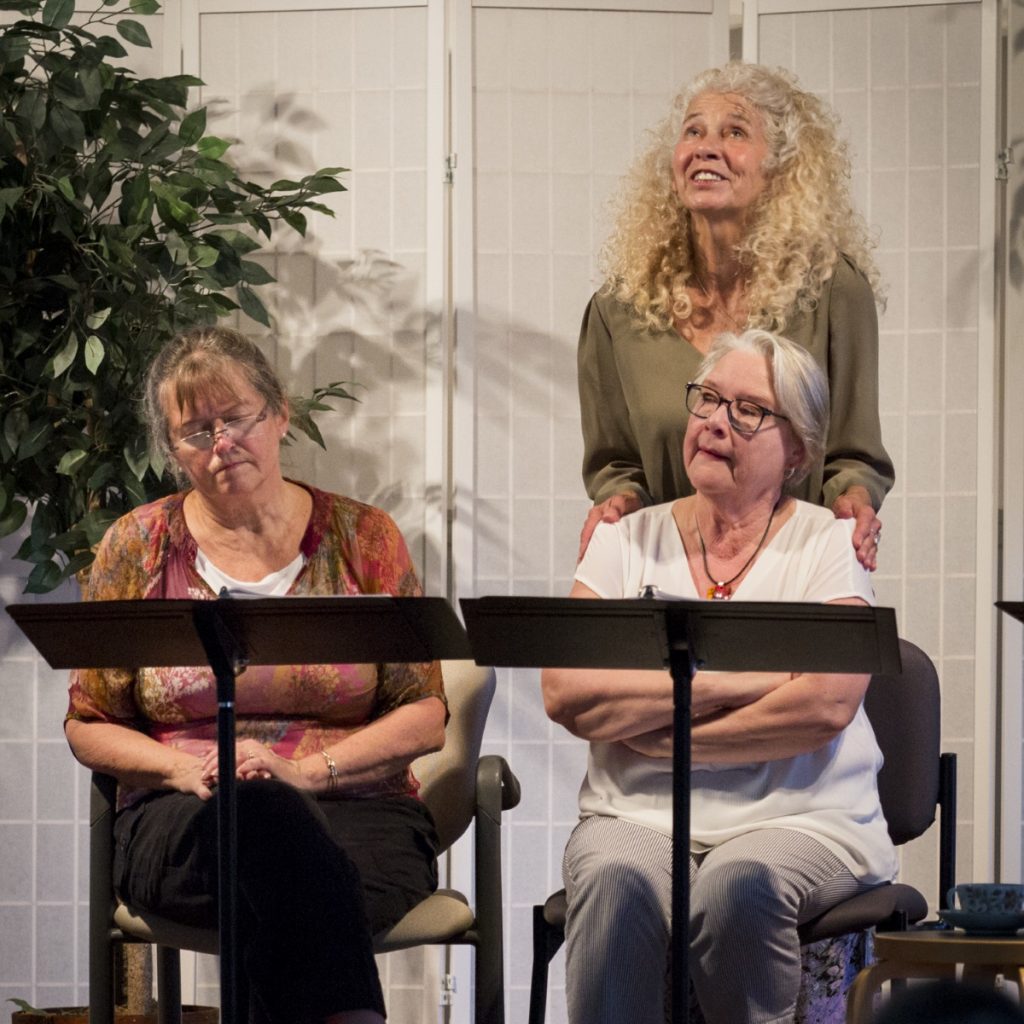 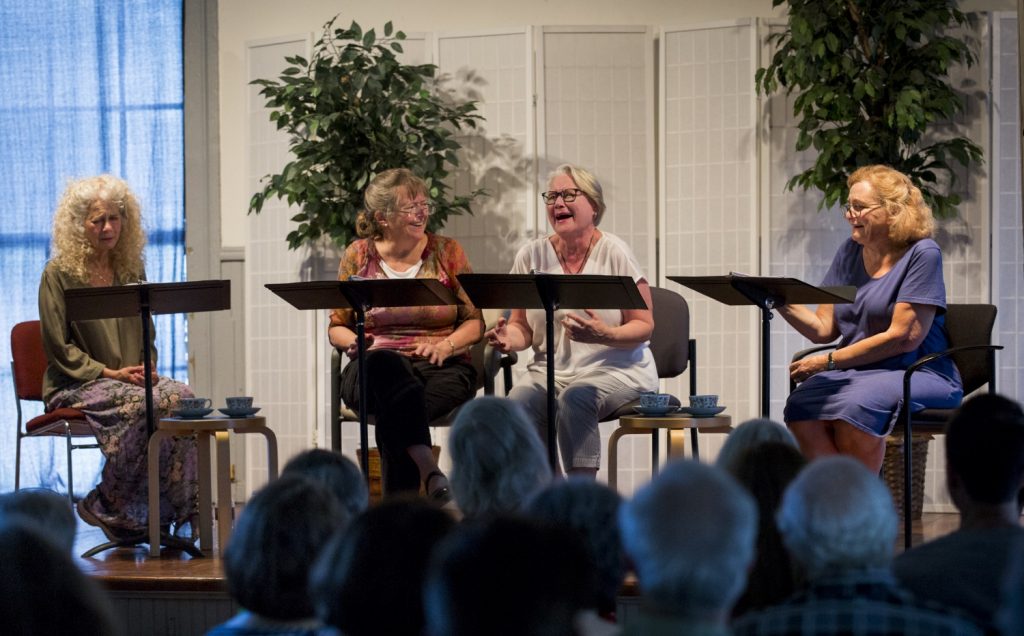 Two elder ensembles are this week’s headliners.  The Berkshire-based WAM Theatre has just announced its plans for a troupe of women over 65, and the latest offering from the British stage in the popular National Theatre Live series features a cast of old folks. Allelujah! is a biting satire on the healthcare industry and rapacious politics in the form of a quirky celebration of old age. The live-capture performance screens at Amherst Cinema on March 9 and 12.

Alan Bennett is one of England’s leading playwrights and one of my personal favorites. Back in the 1960s, he was part of the Beyond the Fringe quartet whose brainy absurdism inspired Monty Python, and that deadpan wit continues to inform his trenchant comedies on serious themes. These include The Madness of George III, recently seen here in an NT Live broadcast, The Lady in the Van, about the eccentric uninvited guest who lived in Bennett’s driveway for 15 years, and The History Boys, a kind of English Dead Poets Society.

Most of Bennett’s stage work in this century has been premiered at the National Theatre under the direction of Nicholas Hytner, who last year opened his own Thameside playhouse, the Bridge Theatre. I was there last summer for the premiere of Bennett’s latest, and I’m glad to see it coming to our local big screen. 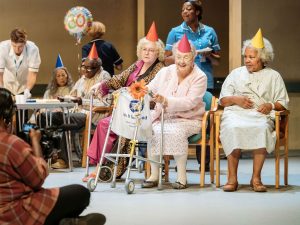 Allelujah! takes place in a community hospital in the north of England whose geriatric wing is about to be shut down, part of a cost-cutting and privatization push by the Tory government. Like most of Bennett’s plays, it’s by turns sweet, bittersweet, bitter and frequently hilarious. It’s also downright angry, especially about two developments that resonate on this side of the Pond as well — the degradation of healthcare and the callous treatment of immigrants.

The ward’s 12 “bed blockers” — old folks who don’t just go ahead and die like they’re supposed to — are a cross-section of working and middle class English life, from a scholarly teacher to a left-wing ex-miner whose son has grown up to be a careerist yuppie. They pass the time in death’s anteroom by reminiscing, bitching, and forming a resident choir. From time to time they abandon their wheelchairs and walkers to form a surprisingly nimble chorus line — which often morphs into full-out production numbers, belting out oldie goodies by the likes of Vera Lynn and Nat King Cole, with a dash of Little Richard (shades of the Valley’s Young@Heart Chorus).

Several plot strands weave through the episodic piece, involving a bid to save the place via an upbeat documentary film, a litigious battle over a deceased patient’s assets, a sudden challenge to a South Asian doctor’s visa status, a veteran nurse’s mania for order and cleanliness, and for good measure, a murder mystery.

Allelujah! is a fond but unsentimental tribute to Bennett’s own contemporaries (he’s now 84), a nostalgic look backward with a sharp eye set against the looming future.

WAM Theatre is doubly unique in this region. It’s devoted exclusively to plays by and about women and donates half its box office to organizations working on behalf of women and girls. Its acronymic name is expressed in the tagline, “Where Arts & Activism Meet.”

Now in its 10th year, the Berkshire-based company, led by Kristen van Ginhoven, mounts two full productions a year, plus a “Fresh Takes” series of play readings, and fields a Teen Ensemble that creates original work grown from the participants’ own lives. 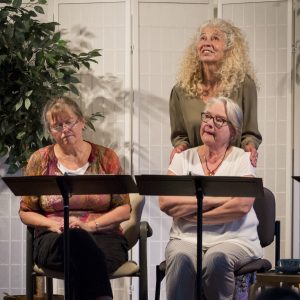 This year an Elder Ensemble will complement the teen group, a new initiative headed by WAM’s associate artistic director, Talya Kingston, and teaching artist Amy Brentano. Kingston told me that while working with the Teen Ensemble, “devising new performances on activist themes, we’ve kept hearing from older artists in our community who were interested in creative opportunities. So we decided to create an ensemble especially for women over 65. The response, she added, “has been astounding!”

During a three-week workshop this summer, the new troupe will parallel the Teen Ensemble, each group devising an original performance on a shared theme. These will be integrated into an intergenerational production that will tour the Berkshires after premiering at WAM’s 10th anniversary gala in July.

The criteria for participation in the ensemble are “enthusiasm and the creative impulse to voice your feelings and ideas through multiple forms of artistic expression.” Email talya@wamtheatre.com for more info.

“Devising original material gives participants a deep sense of ownership while allowing them to delve into themes drawing from all of their diverse talents, interests, personal experiences, wisdom, and bias,” says Brentano. “Senior artists bring a depth of vision and delicious narrative to the work, often offering all of us inspiration while sharing their fierce life force.”