Letters to the editor: Men must respect boundaries and be supportive 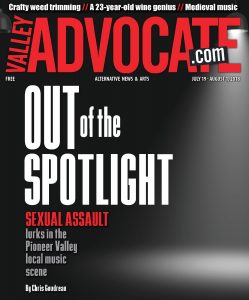 In response to “Out of the spotlight: Sexual assault lurks in the Pioneer Valley local music scene,” (July 19 – August 1, 2018), which this month won a newspaper award in the category of social issues feature story:

That was a good article, and it’s nice to see the local metal scene mentioned in a positive way. We are a pretty tight knit community and look out for each other, fans and musicians alike. No one deserves to be a victim of sexual assault and I think it’s important that we all, men especially, respect boundaries. But also to be supportive, open and not afraid to make a stand when necessary.

I think it’s a positive sign that women are feeling empowered to come forward. It’s not easy. It’s an uncomfortable subject we as a society must face but on the whole, I truly think we are better off for it.

Learning to reduce plastic use 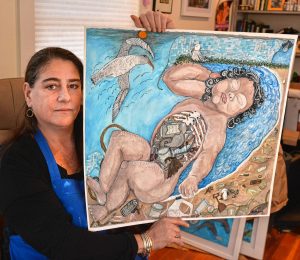 Artist activist Dara Herman Zierlein talks about plastic waste while displaying a page from a book she is working on with her husband, Peter O. Zierlein, Thursday, Jan. 31, 2019, at her studio in Northampton.

In response to “Purging Plastic: One woman’s quest to break a societal addiction to single-use garbage” (February 14 – 27, 2019):

I make my living in plastic and see its benefit of being able to be recycled into so much. It is work to sort through and separate; it’s another chore. I started seeing a lot of plastic needing more bins. I am switching from styrofoam/plastic to paper. I am reusing as much as I can for storage containers, dishes, and learning new ways to reduce my plastic foot prints. Thanks.

I’m a 34 year-old woman living in Holyoke, working as a therapist with middle and highschoolers. For the past several years, as I’ve made decisions about my life — where to live, what to do for to work, whether or not to have children – the realities of climate change have loomed large. The young people I work with are scared of what is to come, and I’m scared too.

The latest climate report from the UN says we have only 12 years to transform our economy to preserve the stable climate human civilization has depended on for millennia. When I first heard that, I felt hopeless: how could we as a society ever get it together to do that? What kind of mobilization could we create that would be massive enough to make the difference science demands?

The Green New Deal is a true game-changer. It is ambitious enough to keep us safe from many of the effects of climate change, reverse damage done to our planet, and create millions of green jobs in the process. It is also common-sense policy that is overwhelmingly popular with American people, regardless of political party or where they live. If we want a way out of this mess we’ve created, the Green New Deal is it.

Young people are clear that the future of our planet needs to be prioritized over any of the forces that would keep us hurtling towards disaster. Any congressperson or presidential candidate who cares about ensuring our future, and wants to earn our support, needs to support Rep. Ocasio-Cortez and Sen. Markey’s resolution for a strong Green New Deal.