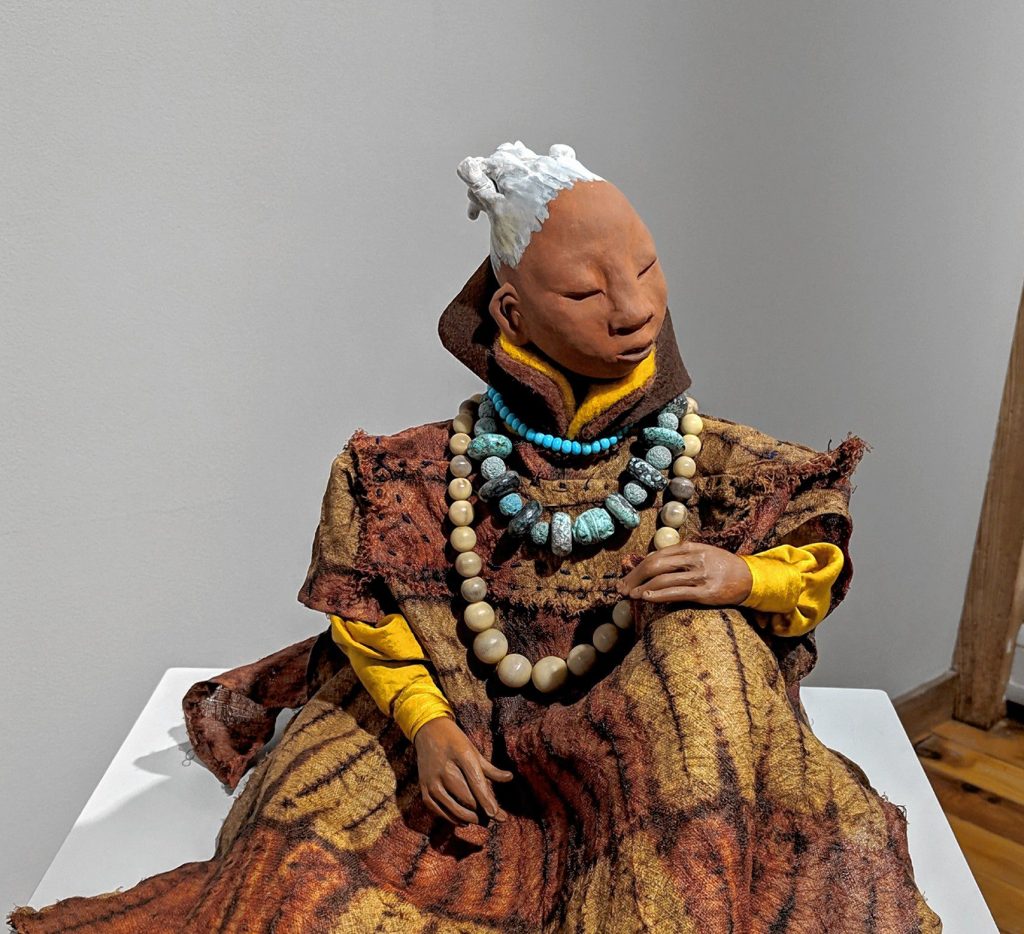 Nana Buluku, the creator of the Earth, sun, and moon 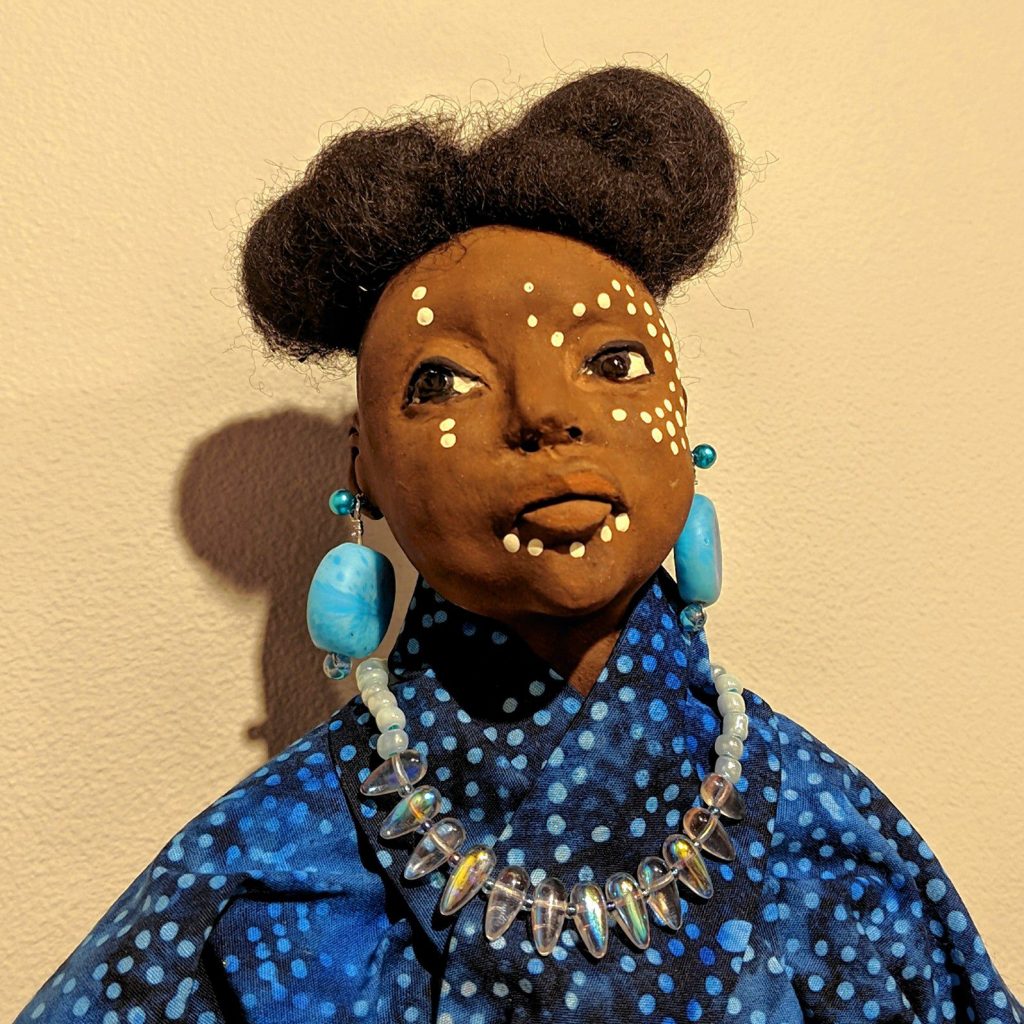 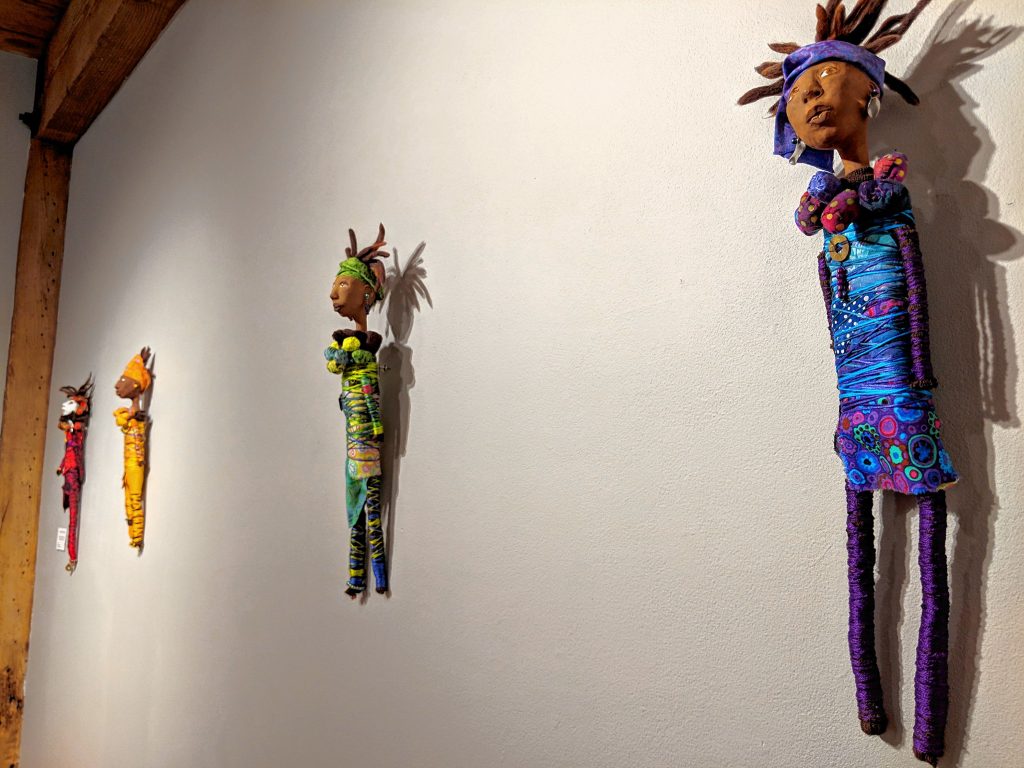 The daughters of OBA — which make up colors of the rainbow 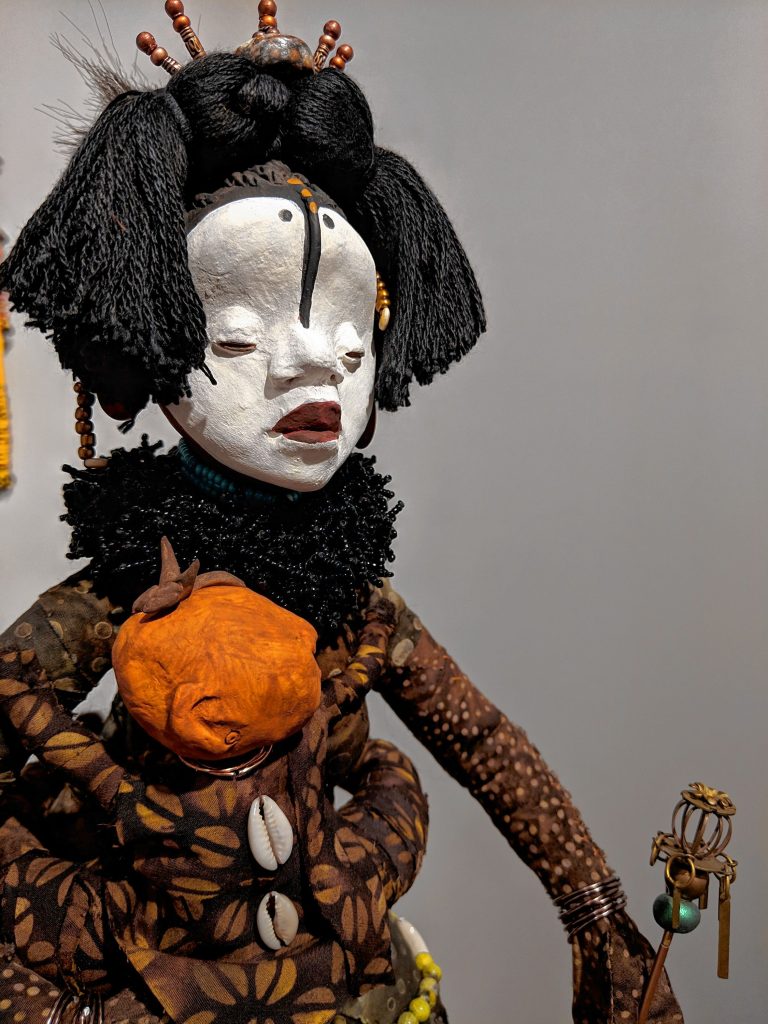 Ala, ruler of life and mortality and the protector of the harvest

“The coming months will be a more favorable time than usual to boost feminine authority and enhance women’s ability to shape our shared reality.”

So says Rob Brezsny’s Free Will Astrology column this week under the entry for Taurus. Whether or not she believes in astrology (and whether or not she’s a Taurus), Turners Falls artist Belinda Lyons Zucker is fulfilling that prediction with her exhibit of clay and cloth doll figures at the Salmon Falls Gallery in Shelburne Falls.

A great thing about this exhibit is its location in Shelburne Falls, a picturesque community even by Pioneer Valley standards. The Salmon Falls gallery overlooks the Deerfield River on the Buckland side. Though the sidewalks weren’t the clearest in that area with the recent snowfall, Shelburne Falls is a great place to take a walk across the bridge and admire the soon-to-reopen for the season Bridge of Flowers. 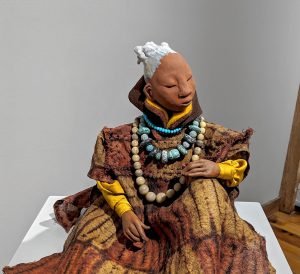 Nana Buluku, the creator of the Earth, sun, and moon

Made from beads, fabric, and clay, the dolls are arranged in a small space in the Salmon Falls exhibition area. Some hang from the walls and others are seated or standing on plinths in the center of the space.

While the objects are stationary, what brings these characters to life are the stories hinted at by their names and roles in African mythology. Lyons Zucker will tell these stories at an event on March 9 at the gallery.

“I’ve been working towards this for a long time,” Lyons Zucker said in an interview discussing the exhibit. She said she had researched her own ancestry through an online DNA test and found that her family has strong connections to Ghana, Nigeria, and several countries in West Africa. Researching the stories and oral traditions from this part of the world, Lyons Zucker discovered that, “lo and behold, there were a lot of female figures that held these powerful mythological powers.”

Among them is Nana Buluku, the creator of the Earth, sun, and moon, who appears in Lyons Zucker’s exhibit seated and larger than the other figures. The doll is dressed in a special cloth called Dida cloth, a rare, linen-like cloth woven by African women and worn at special ceremonies. 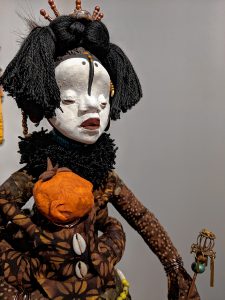 Ala, ruler of life and mortality and the protector of the harvest

The figures are all clothed in different fabrics, often colorful, and usually leaving only their clay faces and hands exposed to the viewer. These display a great deal of emotion. While devoid of wrinkles, the face of Nana Buluku conveys a wisdom of vast experience.

Another, Ala, ruler of life and mortality and the protector of the harvest, also displays wisdom, but is also more sullen, one imagines from the important burden she bears. In one hand, she holds a scepter and in the other, a baby clothed in the same fabric she wears. Both are emblems of power and responsibility in a way, with the power to bring life into the world being a common theme to the women in the exhibit. Ala’s face is painted, shrouding the figure in mystery — apt for a figure who oversees the great mysteries of life and death.

In the exhibition, most of the figures on the walls have some connection to the sky — figures representing the sun, moon, four different dolls for the rainbow, and then Mijaji-Mvua, the rain queen and cloud transformer. As with the other dolls, the clay does the work to communicate emotion with Mijaji-Mvua. Her face is soft, but she has strong, hard-working hands. Dots on her face and clothing evoke rain, as do a cascade of blue and white beads literally raining off of her. 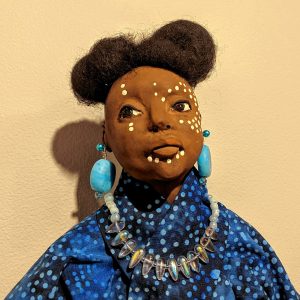 The most vibrant colors in the exhibit come from the daughters of OBA — which make up the rainbow. Nyekundu (Red) has a sunny smile, while at the other end of the spectrum, Bluu (Blue) appears more pensive and reflective while being just as colorfully clothed.

For Lyons Zucker, personality comes from the medium she uses.

“I try to let them be them,” she said of her figures. “I try to relax and let the clay do what it does.”

WOMEN OF POWER runs through April 28 at the Salmon Falls Gallery, 1 Ashfield St., Shelburne Falls. There is a reception on Saturday, March 9, from 3-5 p.m. at the gallery where the artist will tell stories associated with the figures. For more information, visit  salmonfallsgallery.com.