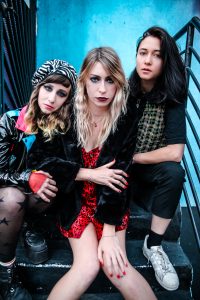 They say time and distance heals all wounds. And on its second full-length album, the formerly Massachusetts-based trio Potty Mouth puts its own spin on this old adage while polishing up its alternative pop punk sound to a healthy West Coast sheen.

You see, the group may have gotten its start in Western Mass., but now calls Los Angeles home, and the change of scenery has seemingly charged up the band to craft its most ear-catching and fist-pumping collection of songs to date. This is pleasing news for fans, who have waited since 2015 for Potty Mouth to release a follow-up to its self-titled EP.

That seeming sense of indecision bleeds over into the next track and first single, “22.” Here Potty Mouth rebrands the familiar punk lament of fear of growing older into its own anthem that straddles the line between being scared of waking up another age, and feeling relieved that you can still do the same things you did when you were younger, only now with a different set of pressures. Packaged as speedy pop punk number with catchy hooks, the song is a strong contender for being your next earworm. But wait there’s more.

“Starry Eyes” is SNAFU’s second single, and a true album highlight. Jangly strums and sighing backing vocals crop up as the band slows the tempo slightly to sing about the most punk subject of all – love. Yes, you read that right, but to keep matters from sounding too sappy the band includes a euphoric chorus with pounding drums and shimmering guitar lines. It’s another dichotomy. The song drips with lush production value and obvious radio-readiness, but it would be interesting to hear what radio station would play a track that opens with the line, “Looks like I fucked up.”

Elsewhere, Potty Mouth finds time to reference its old stomping grounds in “Massachusetts.” A heavy riff sets the scene as Weems details how a creeping sense of dissatisfaction or urge for something more can push a person to want to leave their hometown, much like Potty Mouth left the Pioneer Valley for California.

There are other nods to the past as well. Both “Smash Hit” and “Dog Song” are tunes that have been previously released by the band, but are included on SNAFU in their definitive versions. While “Smash Hit” saw release as a single in 2016, “Dog Song” first appeared on Potty Mouth’s Bad Bad demo cassette in 2011. Call them each closet cleaning moments as the group looks to make a break from its past into a new and exciting future.

SNAFU – Situation Normal All Fucked Up. To Potty Mouth this acronym is more than an album title, it’s a mission statement. The news of the day is a never-ending barrage that has numbed many. The trick is to hijack the powerless feeling of the situation and embrace the chaos on your way to forging your own path through it all.

“Things aren’t always going to go the way we want them to go,” says bassist Ally Einbinder. “So SNAFU’s are par for the course.”

On SNAFU the album, Einbinder, Weems, and Mandanas push Potty Mouth to new heights. The end result could be a new normal – no nonsense rock that stands on its own terms, situation be damned.