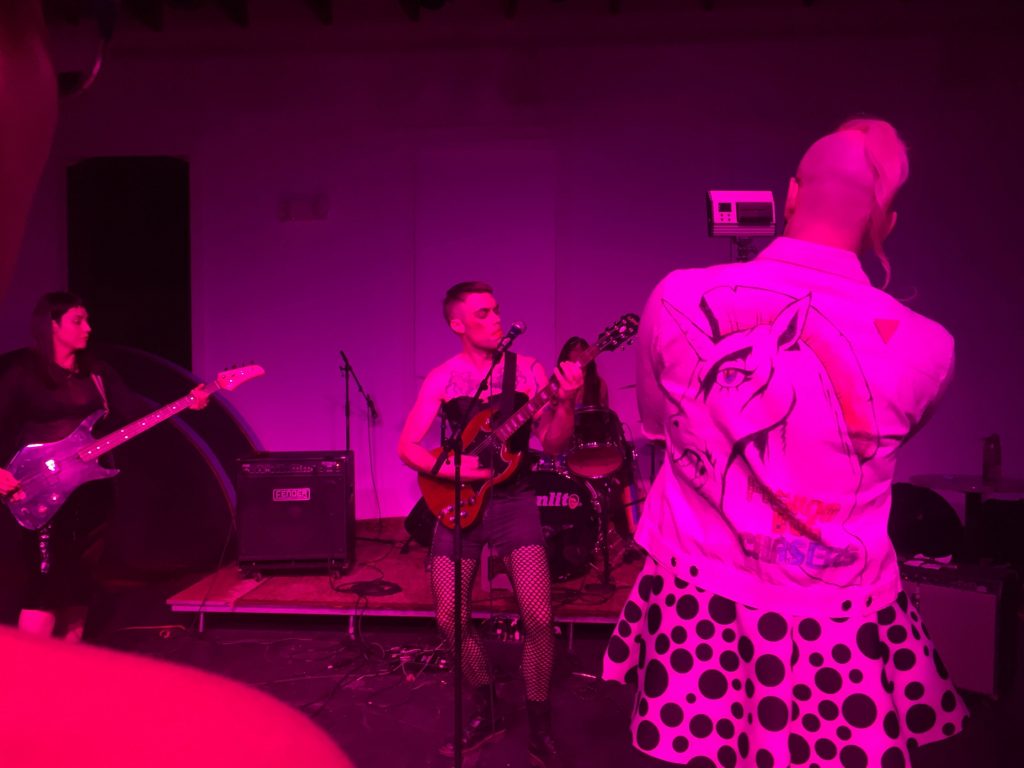 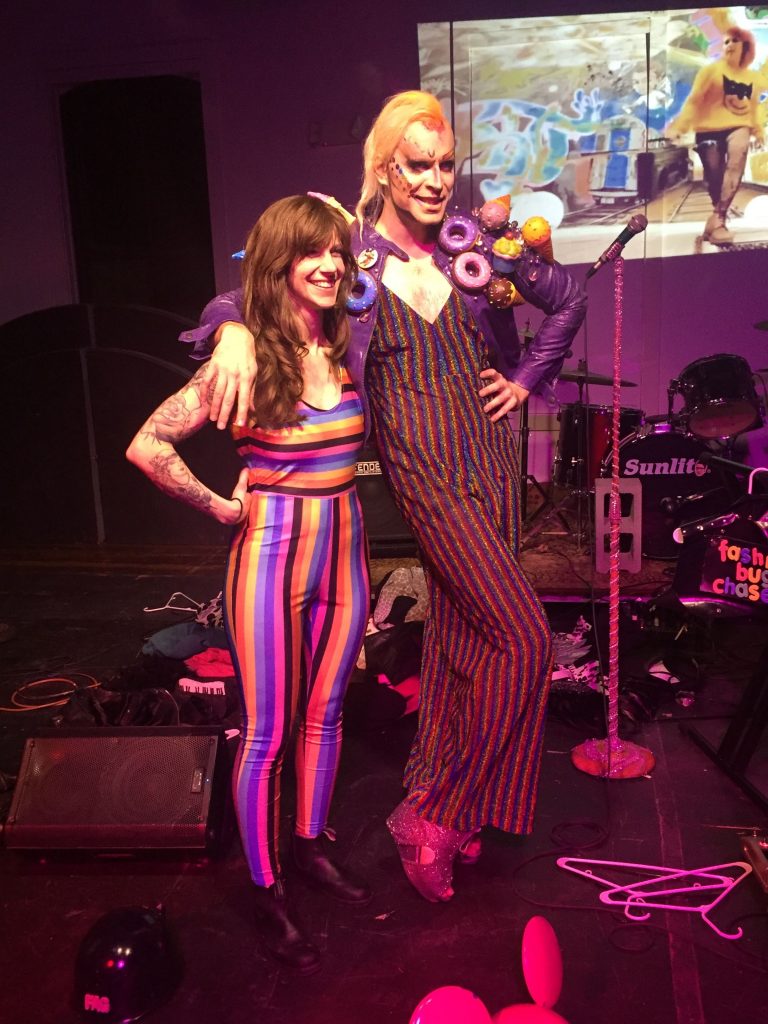 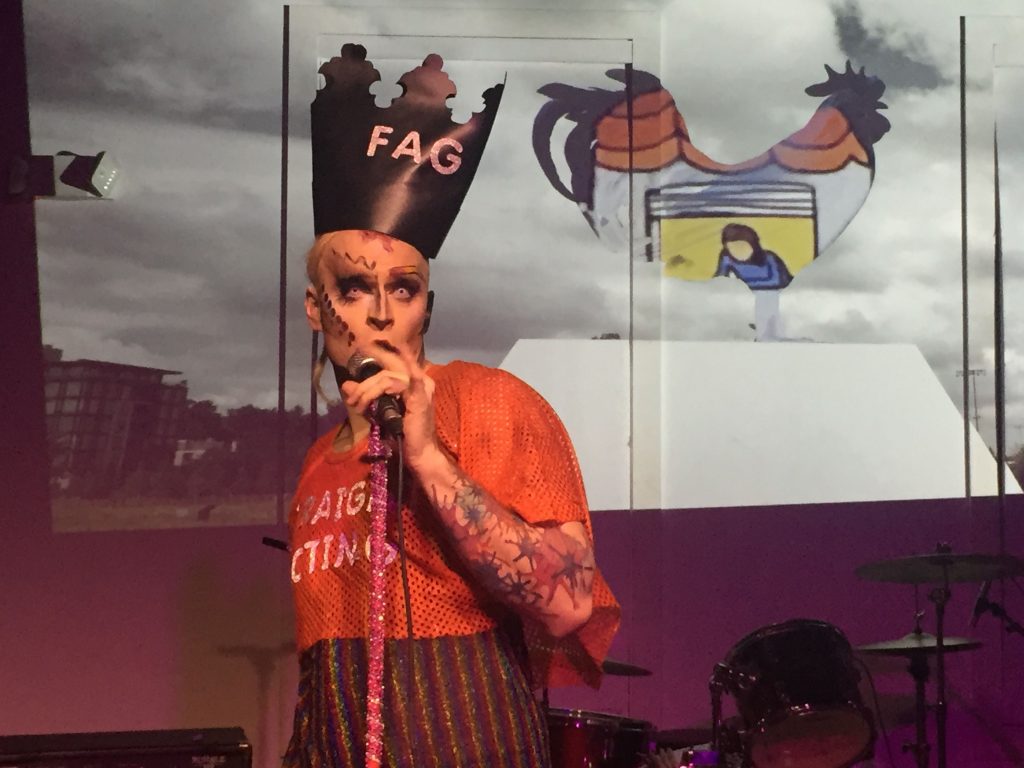 I’ve been hibernating the past couple of months. I just bought a house and have been focused mainly on that. The closest I’ve been to live music is listening to my vinyl — live — in my living room. I broke out of my hibernation recently, however, and attended my first show of the year. I tell ya, it was quite the experience to pop my 2019 show cherry with, too.

This column is about a show organized by Tanya Pearson. (I know you know that name if you’ve been following my columns. She’s the one who investigated gender bias at Wikipedia among other great projects.) She’s an entrepreneur in the Valley music scene, and is constantly busting out fantastic projects. Her latest is putting together a Queer Punk Drag series. The first one was on the top floor of Hawks and Reed Performing Arts Center in Greenfield at the venue’s top floor venue-within-a-venue, The Perch. 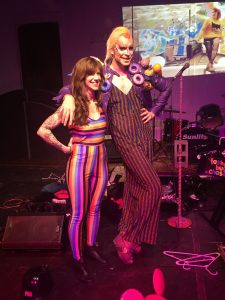 I was so anxious to get there. I evidently was speeding and got pulled over. So unfortunately, I missed out on the first band to open the night, which is too bad because I wanted to check out the Brattleboro-based Badweatherfriend simply because of their description: “moody music by and for evil space robots in love.” Well, there’s always next time.

I got my winter exercise and hiked up the stairs to the fourth floor, because elevators make my equilibrium go all out of whack. I opened the doors and the neon blue light poured out and made everyone and everything glow with a cool, tranquil vibe. I went in alone, but soon found friends. I ordered a Glorious from Lord Hobo Brewing Company and casual conversation emerged while the next band set up in the background.

Looking around the space, it was a cool factory-style setup. There were exposed beams above my head in the tall ceilings and makeshift walls on either side of the “stage” floor with abstract paintings that complimented the neon lights.

Based out of Northampton, newer queer punk band Feminine Aggression are the mothership behind curating these shows. Tanya is on the drums, along with Sean on vocals and guitar and Crystal on bass. They performed the middle set of the night.

I dug their style. I was feeling the music, but also crushing on all their attire. 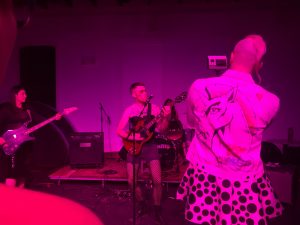 Their outfits: Crystal all in black, with a long black shiny — almost rubbery looking — skirt; Sean wore fishnets under short shorts, a corset, Doc Martens and smeared lipstick, and Tanya was drumming in a rainbow jumpsuit. Headliner Kurt Fowl was filming their set the whole time, walking back and forth, slowly, in a short black and white polka dot skirt with a white denim jacket adorning a unicorn. The fashion was on point, for sure.

Their amplified music, along with the packed roomful of excited attendees shook the floor with their punky movements. At one point I really thought we were all going to take the party through to the third floor.

Like most genres of music, punk is definitely one of the subgenre styles where sometimes it’s hard to pinpoint the sound. And that’s a good thing. I heard influences of Iggy Pop, Talking Heads and Black Flag. I picked up their debut album “F/AGG,” after the show and have listened to it so much that I already know all the songs by heart.

Towards the end of their performance, Tanya jumped up from the drum kit and took the mic. “Every show, it’s like a thing now,” Tanya began, “I started crowd surfing when I was 37. I just wanna like gently float on top of anyone who will hold me and then put me back down and we will play our last song.” And that’s exactly what happened. “Thank you for participating in the consensual crowd surf,” Sean said.

After they played their last song, Sean emerged from behind one of the paintings wearing a cardboard dress, lip syncing to “You Think You’re a Man” by The Vaselines while collecting dollar bills from the audience.

Kurt Fowl is a performance artist from Providence, R.I., Fashion Bug Chasers is his music project that he brought with him on that night to us. It’s queer dancey, punkish music that’s intertwined with fashion and a tad of comedic relief with video installations in the background coinciding with the songs. It’s genius.

Kurt strutted across the floor, making his way to the mic that were next to outfits hung out for his performance. He got right into the set list for the night. Each song had a new look and he sang over a pre-mixed track. Once one song was finished, a piece of clothing was flung onto the floor and a new piece, or accessory was added. 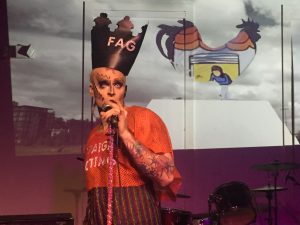 At one point, the polka dot skirt that he was wearing all night came off to reveal a short rainbow jumpsuit, and a cut-off sports jersey with the words “straight acting” with a black crown labeled “FAG.”

“Fudge packers beware, fudge packers beware, that I’m a homophobic faggot,” he sang, dancing, strutting along to the track. Then before you knew it, those shorts shake down to pants and I realized there’s a double rainbow in the room. Two rainbow jumpsuits.

Kurt’s style is unique and artful. The music was danceable and the lyrics were meaningful, yet fun. The videos in the background were outrageous and artsy. I kept thinking they would fit perfectly in a funky art exhibit as a stand-alone art installation. Like the part where there are images of Jesus in crucifix pose inside Mickey Mouse ears … who thinks of that? Loved every bit of it.

If you put David Bowie, the film Party Monster (with Macaulay Culkin and Chloe Sevigny), and a funky Marc Jacobs runway collection together, I believe it would come close to Fashion Bug Chasers. Oh, and unicorns. You cannot forget that mystical creature.

The next Queer Punk Drag night is with JD Samson along with Perennial and hosts, Feminine Aggression, at Flywheel Arts Collective, 43 Main Street, Easthampton on April 20 at 8 p.m.

Jennifer Levesque writes the twice-monthly column, Valley Show Girl, you can reach her at www.valleyshowgirl.com.