Review: Art made on an iPhone 6? 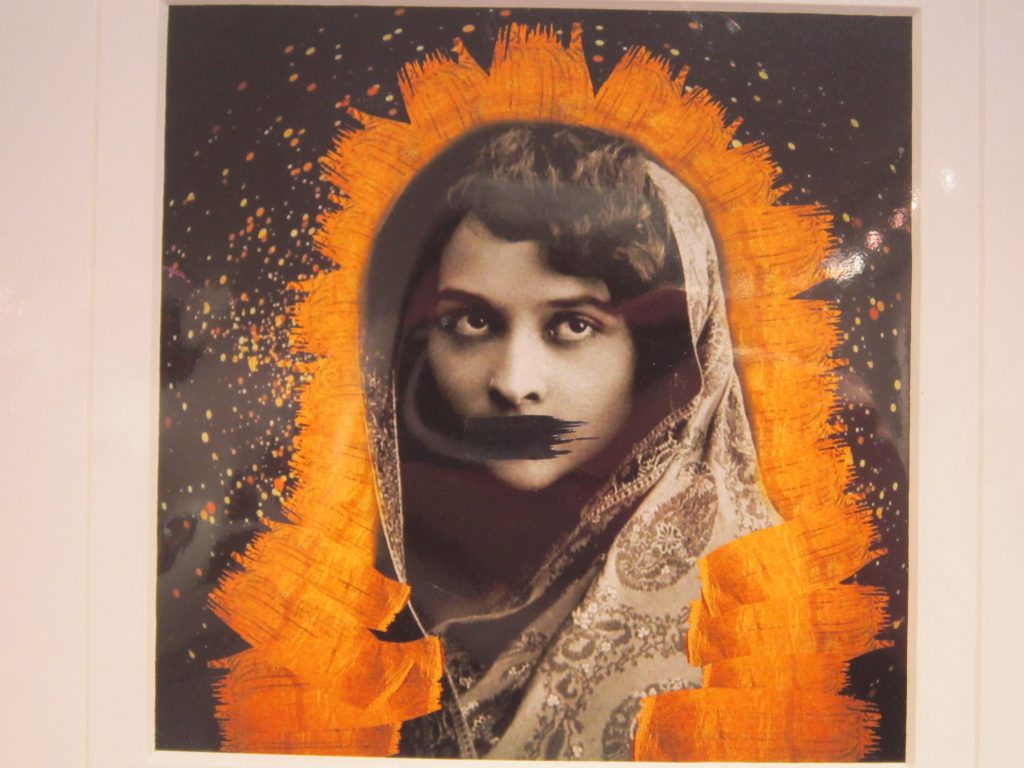 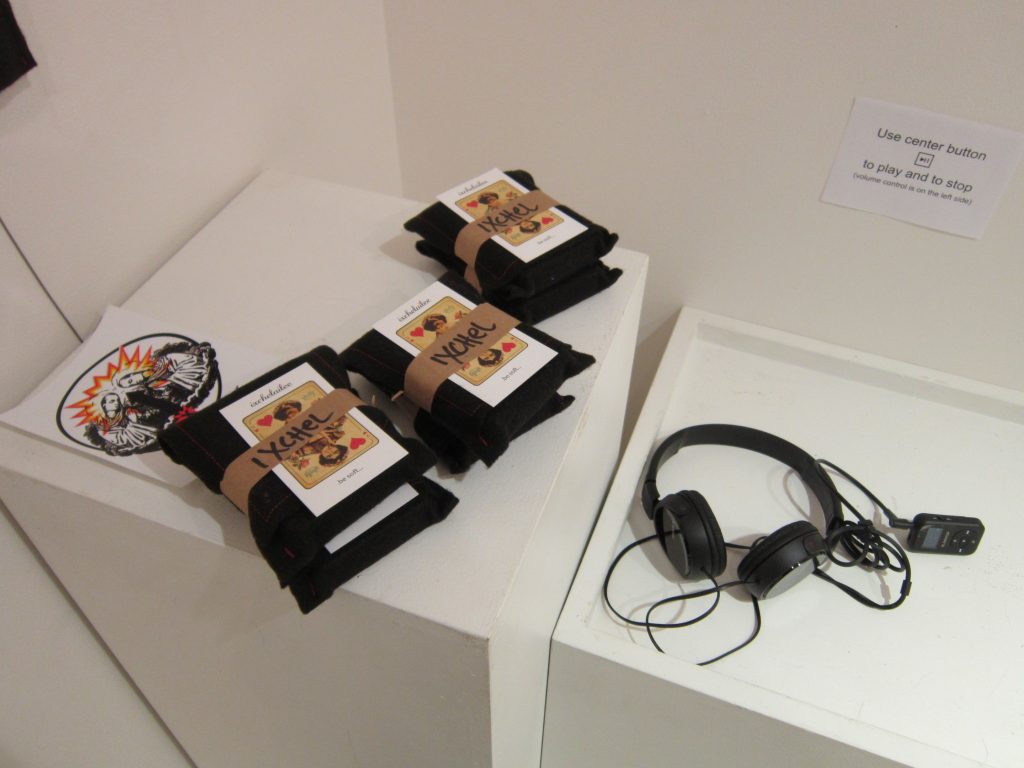 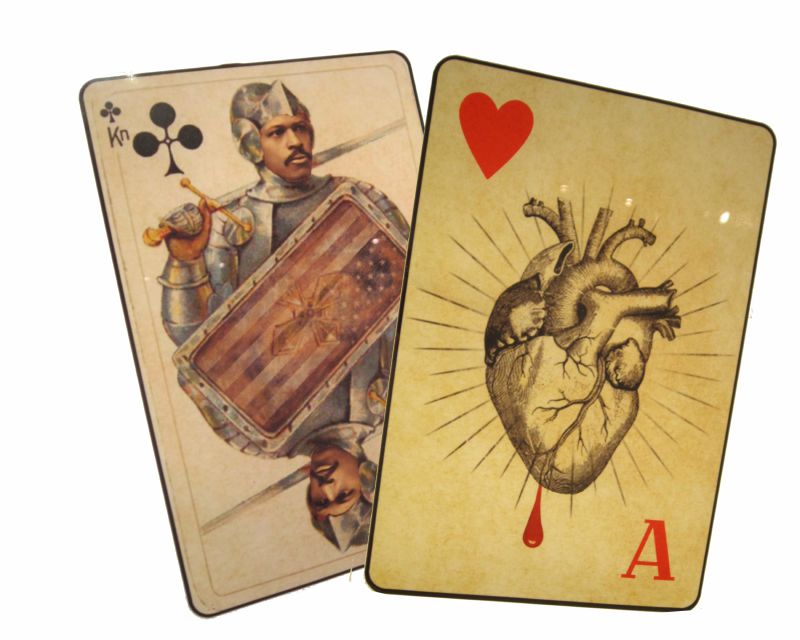 Turners Falls artist ixchelailee has produced a series of digital collages that stand toe to toe with any other non-digital artwork that you might find in art galleries across the Pioneer Valley. Her exhibit, “Art as veil: hiding behind and walking through,” on display through March 22 at Artspace Community Arts Center in Greenfield, transforms religious symbolism and historical imagery into artwork with new meaning.

What’s most surprising about this exhibit is that all of the artwork was created on the artist’s iPhone 6. The idea sounds a little gimmicky at first, but odds are if you don’t know this fact going into the exhibit it wouldn’t be readily apparent. And even so, that doesn’t change the quality of the art on display, which is striking for its quasi pop art collage style that combines classic Biblical and ancient Greek imagery with 1920s photographics, and ancient renderings of European monarchs.

In the artist’s own words, Art as Veil is described as, “From hiding behind … to walking through arts as veil … the sieve which separates grief … and the catharsis that emerges.” Here the artist mentions a theme of grief, which blooms into catharsis, which is something to think about when viewing the work as a whole.

One of the most striking collages among the Our Lady series is a piece titled, “Our Lady of the Quiet Mouth and Unquiet Eyes,” which depicts a woman covered in a veil; her mouth covered in what appears to be black tape, but her eyes are filled with determination. Strips of gold tape surround her headshot portrait, which almost resembles a halo. The woman in this piece shows a quiet courage, which could be seen as commentary about how women every day are silenced by patriarchal oppression in our society. 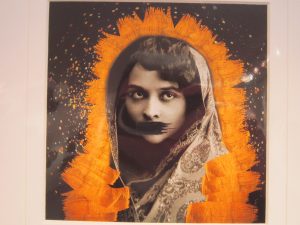 “Our Lady of the Quiet Mouth and Unquiet Eyes.”

Other pieces in this series celebrate femininity, showing women not as male objects of lust or as saintly mother, wife, or daughter figures, but as human beings with a rich tapestry of thoughts, beliefs, and emotions.

The second part of the exhibit is a series that focuses on a deck of playing cards. Here we find the typical four suits — diamonds, clubs, hearts, and spades, along with a joker card. The pieces in this series seem a little more open to interpretation compared with the Our Lady collages. One aspect that remains a constant among the many cards are the Aces, which depict a single drop of blood dripping from various images — a human heart, a brain having a eureka moment, a tree barren of leaves, and a diamond.

Let’s start with the diamond, which hints at it being a blood diamond. The fact that the other cards show two men who appear to be from South Asia or Africa and that there’s a noble looking white woman with an American flag draped in the background of her card doesn’t seem like a coincidence when juxtaposed with the image of a bleeding diamond. One takeaway is that this might be a critique of U.S. imperialism.

Others in the series don’t offer up their secrets with as much ease. The clubs show black men and women as heroic figures such as knights in armor. One knight among the clubs cards also has an American flag with what seems to be a cross in the center of it. What this apparent symbolism means is, of course, open to interpretation, but that’s the beauty of taking the time to understand what a piece of art is trying to convey. 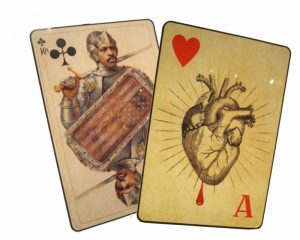 The last part of the exhibit is where it truly shines in its multimedia facet. A poem titled Avouchment is seen across a single wall of the gallery. On a weekday afternoon, you might hear the sounds of an elementary-age student practicing cello merging with the words of the poem spoken in a recording that’s available for anyone to listen to on an mp3 player with a pair of headphones.

“To take this day and expel/ acrimony and malice/ an entrance for the augural preserved/ sophrosyne that which whom I am truly,” reads like a daily mantra; by removing anger and bitterness from life there’s a path towards a future that’s pure and aligned with “sophrosyne,” an ancient Greek concept that excellence in character is found with balance.

So, what’s the grand takeaway from Art as veil? The art is imaginative and draws from history, while remaining vibrant and contemporary; the symbolism is rich many different meanings, and overall this exhibit is inventive, eye-catching, and has a rebellious spirit that takes the old and shapes it into art that’s bravely iconoclastic.

For more information about ixchelailee visit her website at http://ixchelailee.wixsite.com/artwork. Gallery hours at Artspace Community Arts Center, 15 Mill St., Greenfield are from Monday through Thursday from 12 to 6 p.m. and Friday from 10 a.m. to 3 p.m. and also by appointment by calling 413-772-6811.