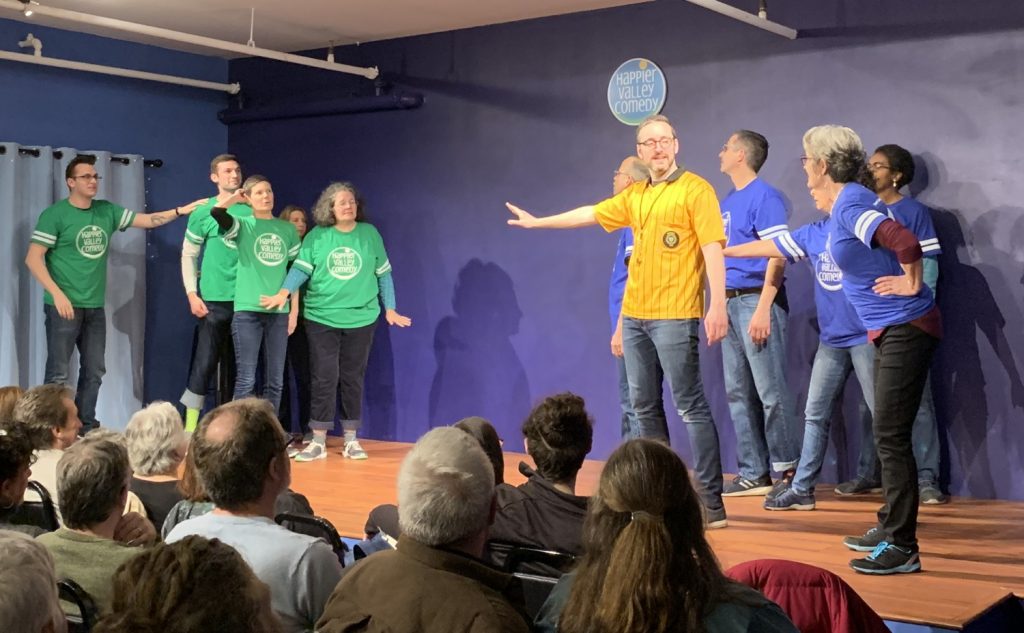 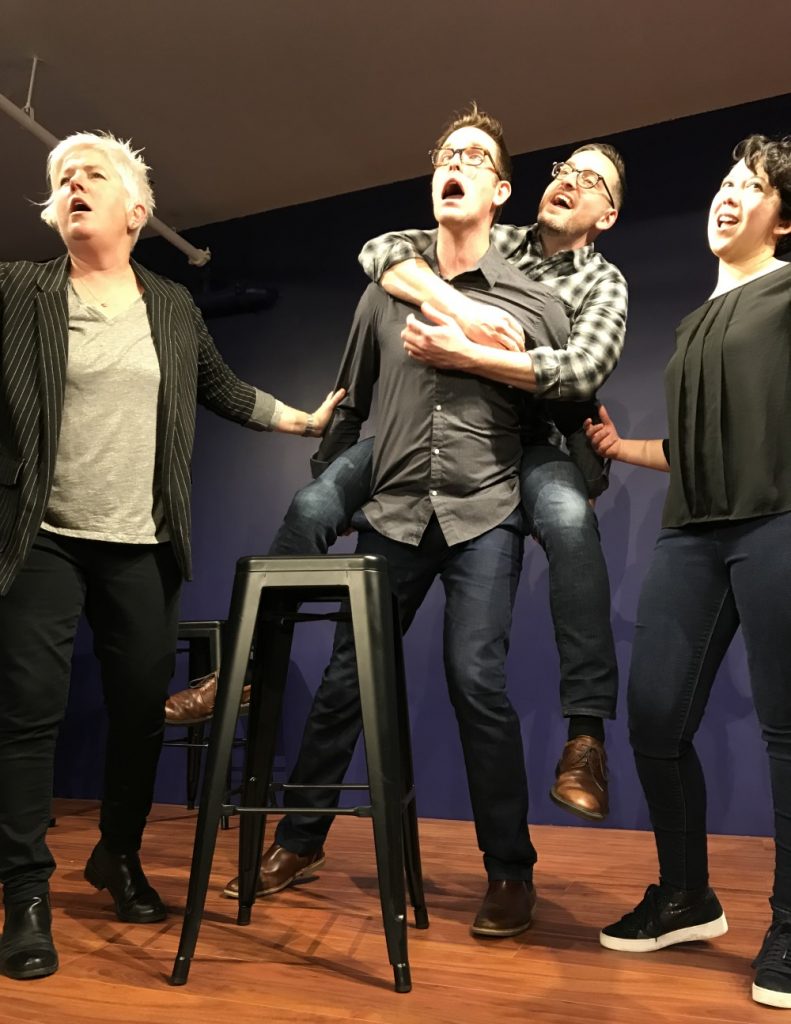 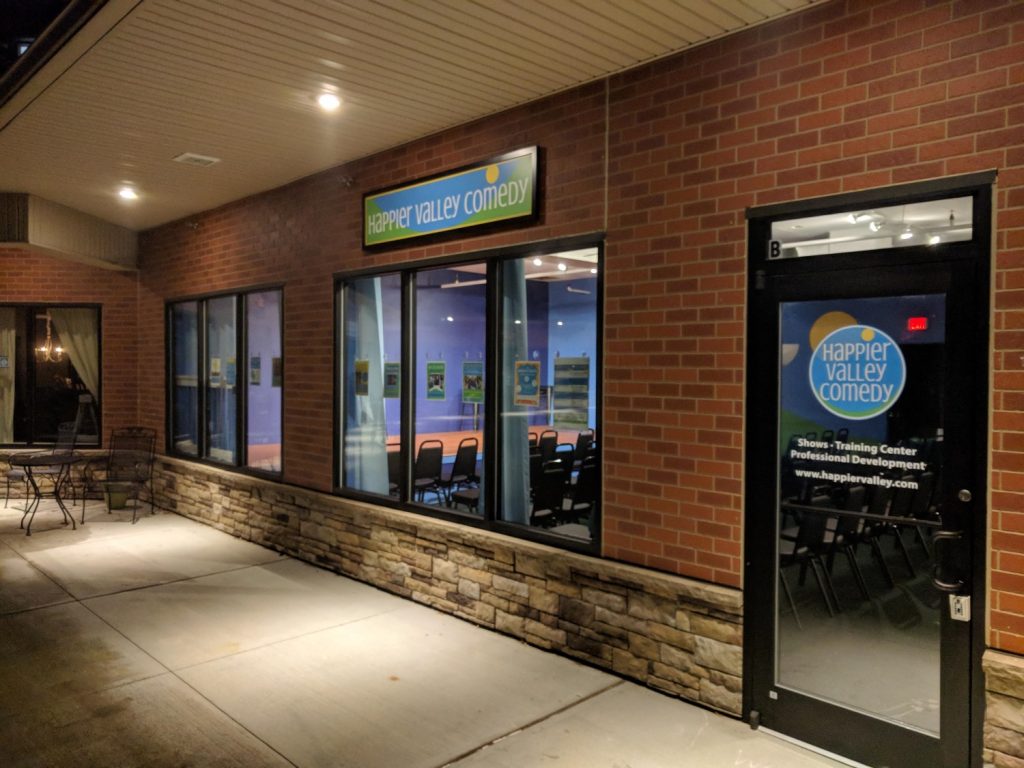 Scott Braidman is giving me a tour of his workplace, the Hadley headquarters of Happier Valley Comedy, of which he’s the artistic director. It’s a bright, welcoming space in the Mill Valley Commons, a mixed-purpose building fronted by Route 9 and backed by cornfields. HVC is flanked on one side by an Irish dance studio and on the other by a tavern, businesses that sometimes provide unsolicited musical accompaniment through the common walls.

Happier Valley is the bustling hub of the area’s burgeoning improv comedy scene. When the company moved into these new digs last summer, its founder and self-styled “Head of Happiness,” Pam Victor, described it to the Advocate’s Gina Beavers as “a dirty vanilla box.” Since then it’s been spruced up and fitted out as a small theater-cum-workshop space with a small stage, seating for 70 and a box-office cubicle. A room in back triples as office, classroom and greenroom. 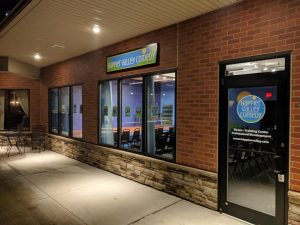 This is home base, Braidman tells me, for a half-dozen improv “teams” with overlapping personnel. Every Saturday of the month features a different show, in a rotation of formats and themes. Happier Valley also offers a broad curriculum of training workshops, for beginners up to pros, which have spun off several upstart teams of their own.

Posters and photos from previous shows line the walls, and the troupe’s inclusive philosophy and cheeky sense of humor are reflected on the restroom door, which sports all-gender and speedy-wheelchair logos and the message “Whatever – just wash your hands.”

All of the performance formats – from a sports-themed improv battle to a makeshift musical – use spontaneous audience suggestions as their springboard and build on the foundational rule of improvisation: “Yes, and,” the principle that improvisation is a cooperative transaction that yields “the joy of the unexpected.” 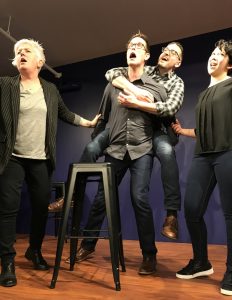 On the day of my visit, I’m invited to sit in on a rehearsal for one of the troupe’s regular features, “The Understudies,” with a cast comprising Braidman, Mosie Senn-McNally, Paul McNeil and Maile Shoul. Braidman explains the setup: “We tell the audience they’re here for the opening of a brand-new Broadway musical, but the entire cast is unavailable, so we have to figure it out.” Audience prompts provide the framework – title song, lead character and setting – “and we go from there.”

The concept of “rehearsing” a completely improvised piece of theater seems contradictory, but there are parameters, I discover. The opening number, for instance, has a set verse-chorus structure, “and there’s always a rap number,” Braidman adds.

The crew rehearses by initiating scenes that morph into extemporaneous songs, accompanied by pianist Bryan Dunn. When Braidman asks me to suggest a setting, I offer “a high-class Paris apartment,” and they’re off. A chichi cocktail party, hosted by a debonair Braidman, with Senn-McNally as a painter, Shoul a gargoyle and McNeil a tourist whose baguette aversion glides into a song about “carbs,” ending with the cast musically declaring, “We’re much too French for France!”

“Part of the fun of improvising is that it’s like walking a tightrope,” Braidman says. “The audience sees that there’s a high-risk, high-reward kind of setup, where they know you haven’t planned it but you’re promising to make it entertaining anyway. Making it a musical heightens both the risk and the reward.”

My suggestion of the Parisian setting wasn’t just off the cuff. It looked ahead to an upcoming special at the Majestic Theater in West Springfield, where a Happier Valley Comedy spinoff, The Majesters, have a regular slot in the summer. On Monday the 18th the venue hosts “Theater on the Spot,” in which a team of Happier Valley veterans will improvise a play incorporating the set and props of the theater’s current production, the sex farce Boeing Boeing, which takes place in … a fancy Paris apartment.

This Saturday, the 16th, the headliners in Happier Valley Comedy’s home space will be Not in Charge, a new squad headed by longtime improviser Julie Waggoner. Each performance, Braidman tells me, “is inspired by true stories from their own lives.” A prompt from the audience sparks a memory, “and they create the show out of that.”

This month there’s an extra – “The Happiness Festival,” on March 30. Featuring a three-part showcase of Happier Valley Comedy shows and programs, from “Family Fun” to an evening selection of the troupe’s “prime time” acts, it’s a fundraiser to pay for a professional lighting system – and soundproofing.