Stagestruck: Blood, Tears & “Sweat” – Two plays reflect on the past and echo the present 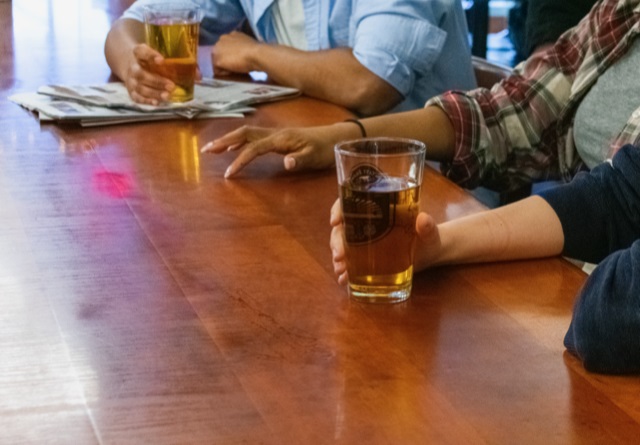 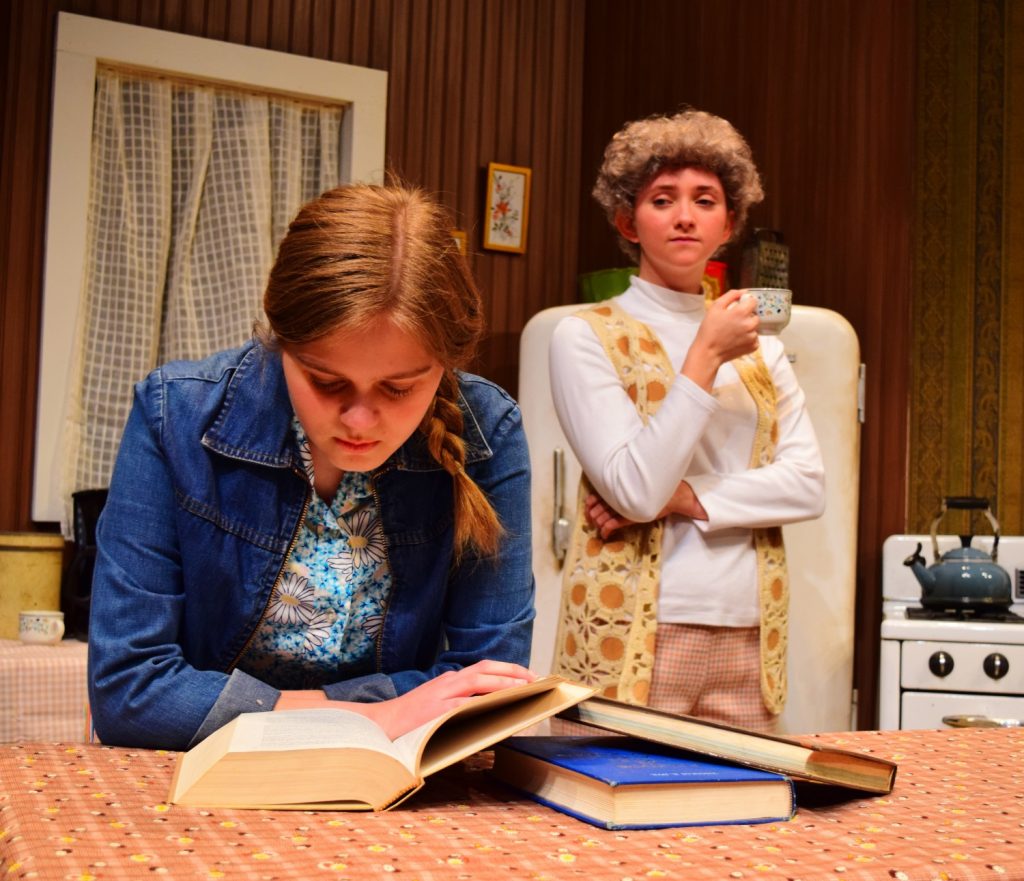 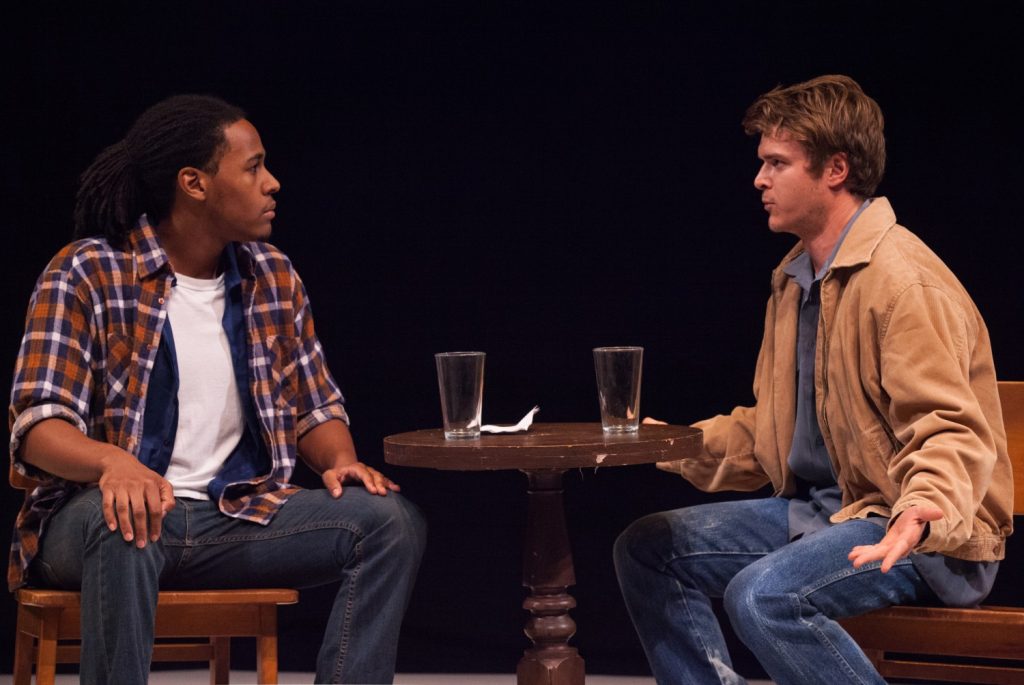 Two of the Five Colleges’ season-ending productions, both by award-winning women playwrights, hark back to moments in recent history that continue to reverberate. One takes place in a remote backwater, the other in the industrial heartland, but they share themes of life-shattering violence — physical and emotional, economic and social — and the value of community.

At UMass this weekend and next, the theater department stages Lynn Nottage’s working-class drama Sweat, directed by Gilbert McCauley. Set in a fictional bar in all-too-real Reading, Pennsylvania — an urban poster child for industrial decay and desertion — it follows a group of steelworkers, male and female, black, white and Latinx, who find their jobs and futures suddenly under threat. 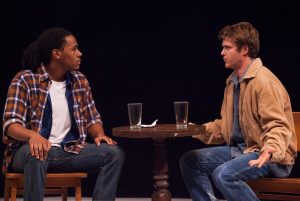 The action shifts back and forth between 2000, when the dot-com bubble burst and crashed the Stock Market, and 2008, in the trough of the Great Recession — both moments when the collapse of lofty financial markets rained shrapnel on ordinary lives. And though it was first performed in 2015, the play can’t help but anticipate Trump’s appeal to the alienated working class, which was fresh in audience’s minds when it opened on Broadway in 2017 (and won the Pulitzer Prize for Drama).

Nottage spent two years interviewing workers in Reading, where she found a sense of betrayal and helplessness, people who had built their dreams on stable union jobs now feeling “invisible and isolated” as capital flight decimated their hometown. But Sweat, she told an interviewer, is not just about Reading. “It’s the American story. It could be any post-industrial city across the landscape.”

Within the play’s ensemble structure, two black-white relationships play out. Cynthia and Tracey are best friends whose bond unravels when they apply for the same supervisory position at the steel plant. Their sons, Chris and Jason, are former best friends whose generous worldviews have been twisted by time in prison. Strained race relations are not the play’s key focus, though. They are just one symptom of the stresses these lives have been subjected to. Another resonating symptom, for one of the characters, is drug addiction.

“My hope,” Nottage said, “is that after the audience sees the play they’ll want to sit down and talk to someone who they’ve never had a conversation with before. I hope that they will ask really tough questions, not just of themselves but of the legislators and the people who are in power.”

Reflecting on the stories she heard from Reading’s workers, she added, “I hope they will also understand the power of art and be more willing to engage with storytelling.”

Next weekend, Mount Holyoke College theater presents Sarah Treem’s 2014 play When We Were Young and Unafraid, directed by MHC senior Abby Carroll. The “when” in the title is 1972, in the days of the rising Women’s Liberation movement, on the cusp of Roe v. Wade and with the Violence Against Women Act just over the horizon. In this volatile era, the play unfolds in a comparatively peaceful haven, an isolated bed and breakfast that is also a covert shelter for women in flight from their abusive husbands. 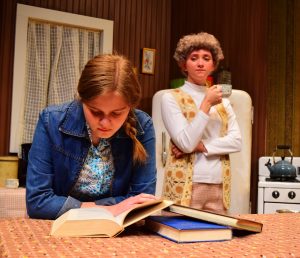 Agnes, its proprietor, is a former nurse who lost her license for performing abortions and has since taken up the cause of other needy women. She is dealing with her teenage daughter, Penny, whose crush on her school’s football captain threatens to upset her college-bound plans, and with a newly arrived guest, Mary Anne, whose battered face tells its own story. Standing in for the entire social politics of the time is radical-black-lesbian-feminist Hannah, who stumbles on Agnes’s place on her way to a separatist women’s commune.

Within this quartet, in the words of a critic reviewing the play’s New York debut in 2014, the playwright “has come up with a smart and exciting premise to bring characters of different backgrounds — and different notions of what it means to be a woman at a pivotal historical moment — into proximity and conflict.”

Treem is known primarily for her work in long-form television, as creator and/or writer of such grown-up series as The Affair, In Treatment and House of Cards. Here she looks back on a time when themes from those shows — sex, self-confidence and politics — explosively collided.