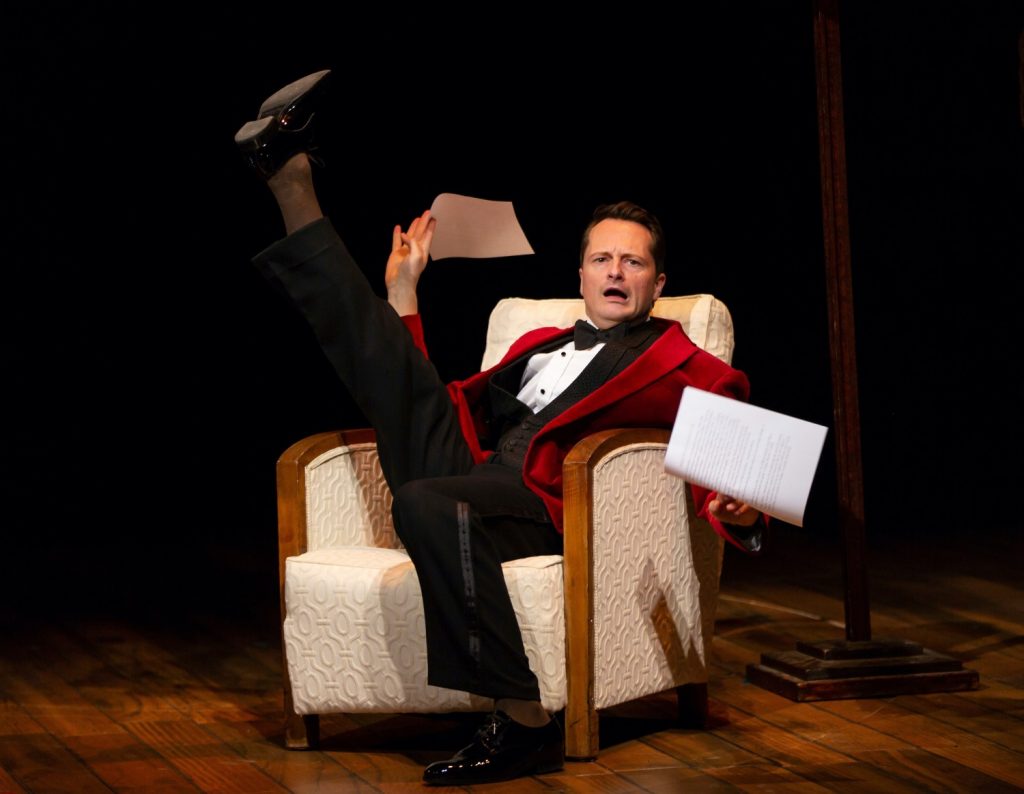 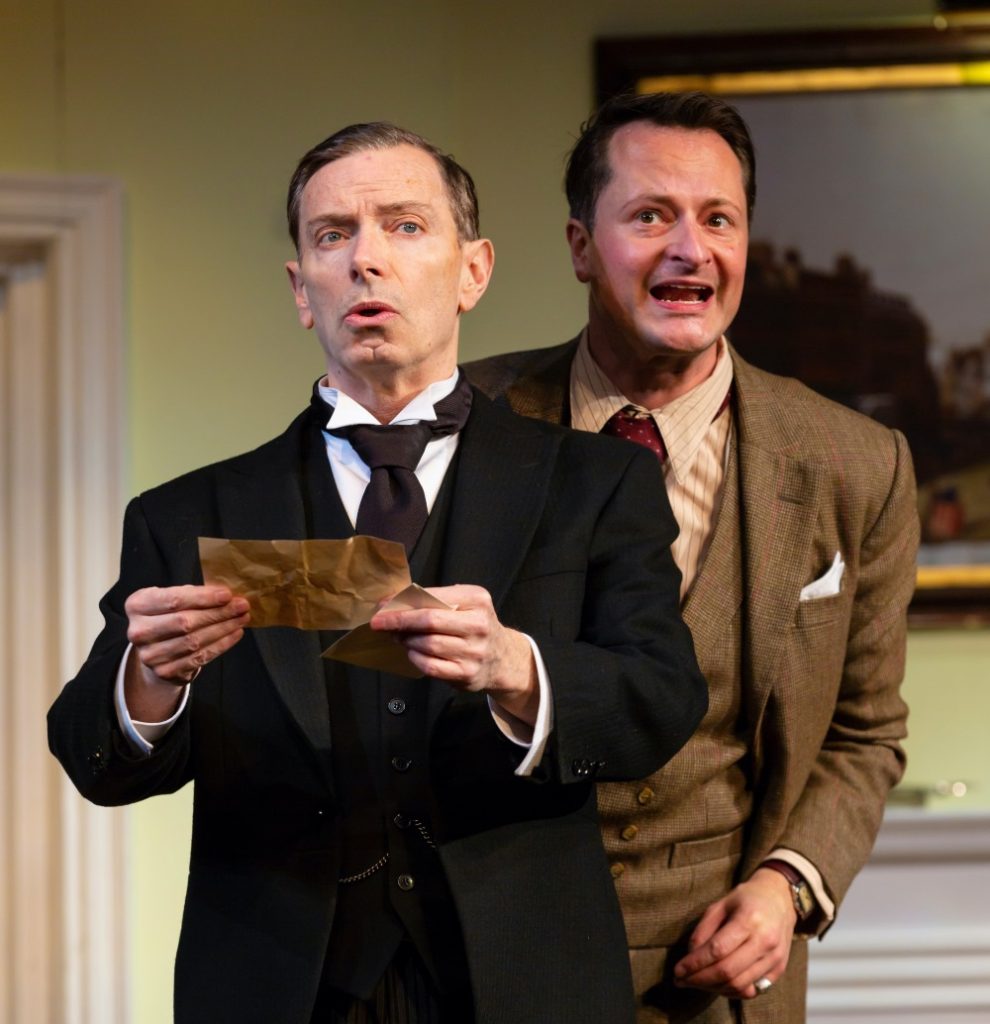 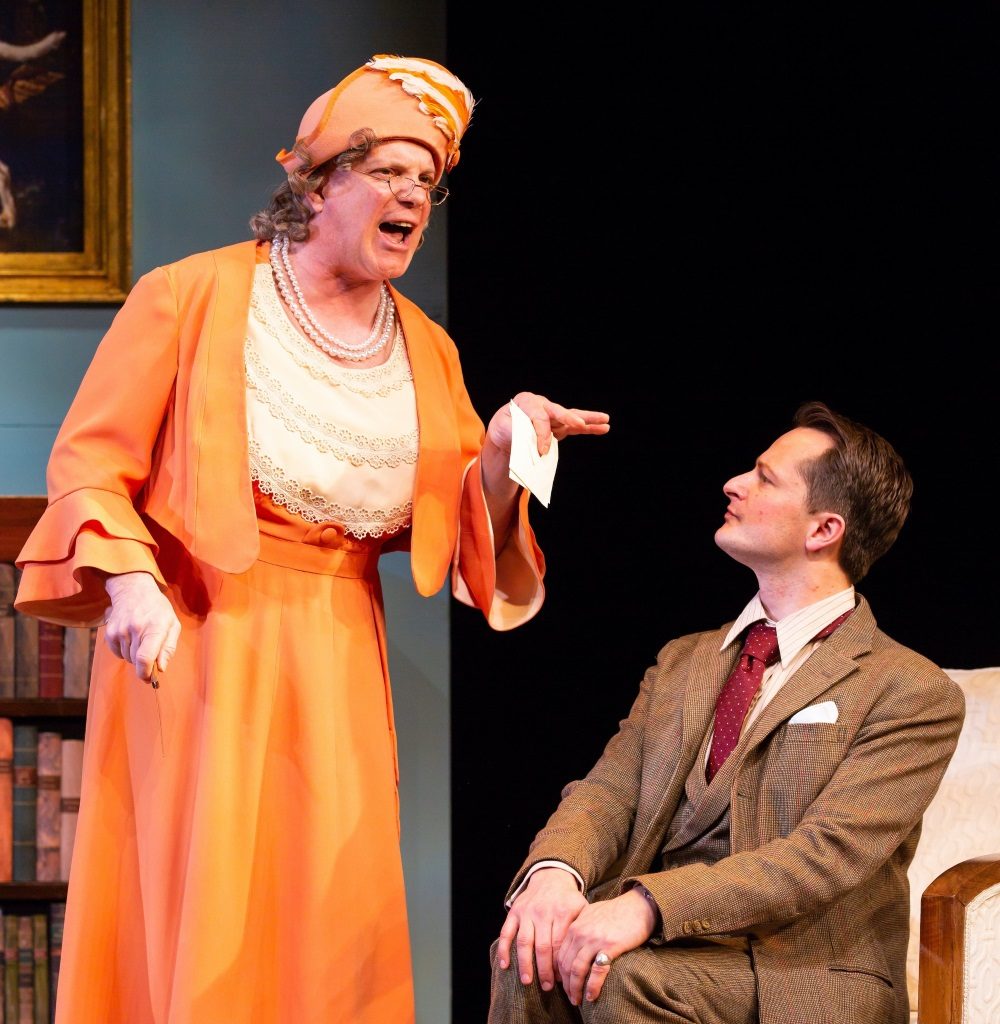 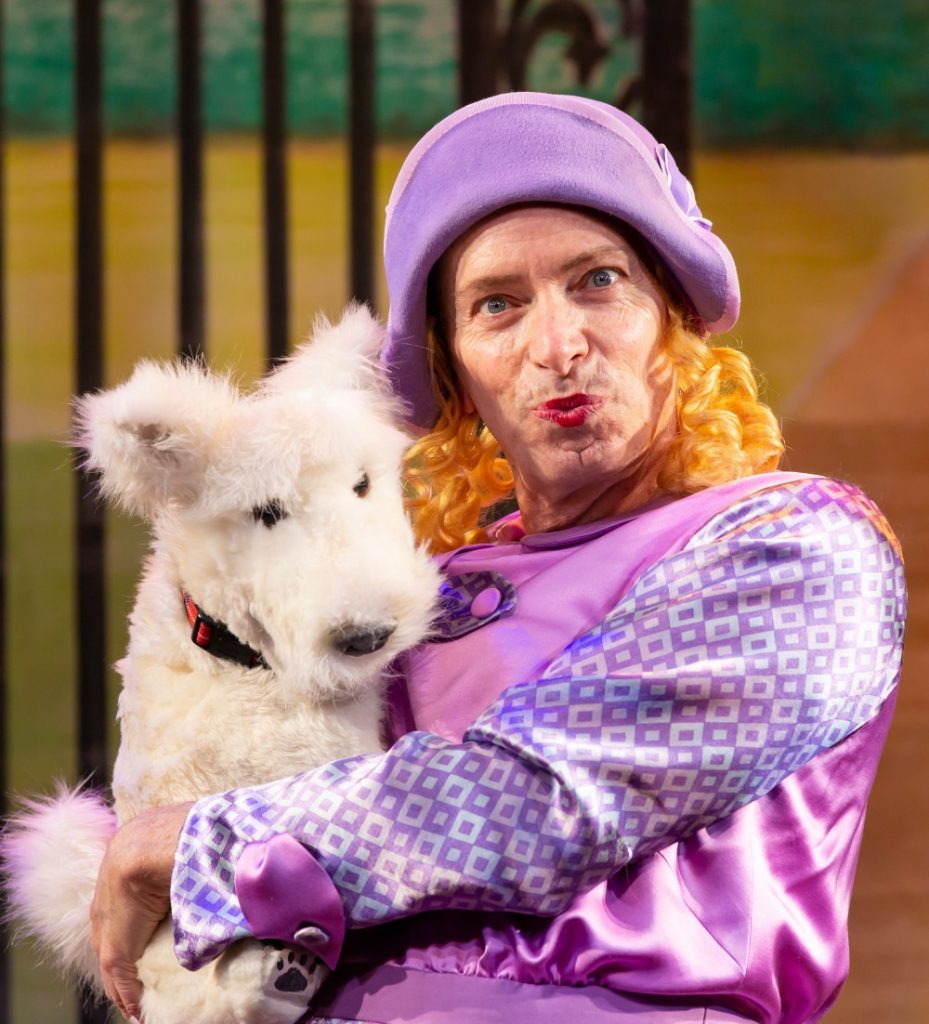 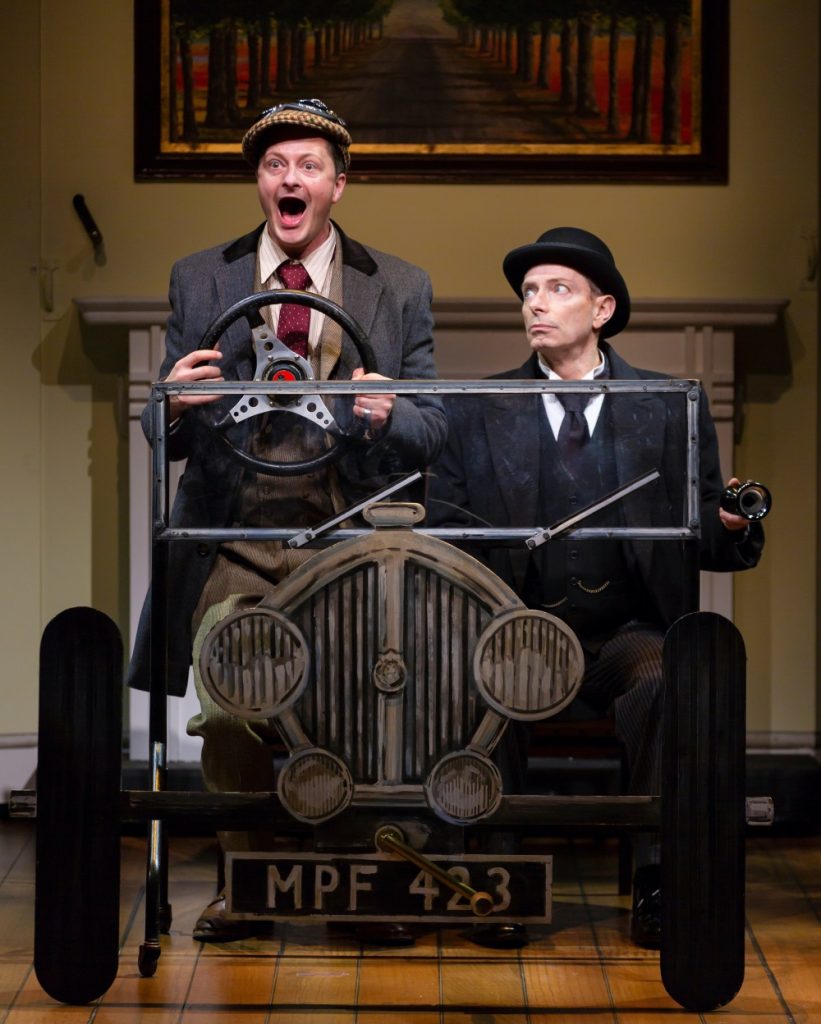 My brother is the world’s biggest P.G. Wodehouse fan. Well, maybe not the biggest — he’s got legions of competitors for that title — but big enough to have come up from his home in New Jersey to accompany me to the American premiere of a new Wodehouse-derived play.

It’s Jeeves & Wooster in “Perfect Nonsense,” playing through April 20 in a not-quite-perfect production at Hartford Stage.  Jeeves and Wooster, of course, are the finest creations of the man who has been rightly called the greatest comic writer of the 20th century – Jeeves the sublimely fastidious, unflappable, erudite and endlessly resourceful “gentleman’s gentleman” to breezy, vacuous upper-class twit Bertie Wooster. The two of them inhabit a sunlit Edwardian world that never really existed, where everyone’s filthy rich, falling in and out of love, and getting into scrapes that Jeeves unfailingly resolves. 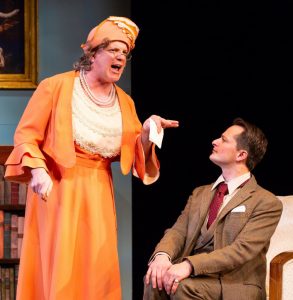 The play, co-written by the brothers Robert and David Goodale, premiered in London in 2013, directed by Sean Foley, whose background and forte are physical comedy. He has come over to helm this production, bringing with him Alice Power’s period costumes and clever sets, but not the original cast. This one, three actors playing multiple roles, is all-American.

The plot, drawn from The Code of the Woosters, a 1938 Wodehouse masterpiece set in post-WWI England, is contained in a meta-theatrical envelope. Here, Bertie relates his latest (mis)adventure to us, the audience. It’s a classic piece of Wodehousian nonsense involving the theft of an antique cow creamer and a policeman’s helmet, true love impeded by parental displeasure, and the comeuppance of a fascist bully. Bertie acts it out with the ad-hoc assistance of Jeeves and Seppings, butler to Bertie’s bossy aunt Dahlia. 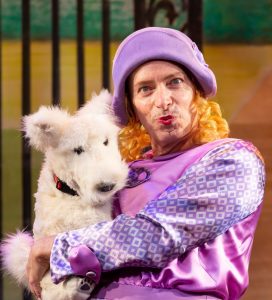 The two servants take on an array of supporting characters from the Wodehouse stable, and provide most of the entertainment. Arnie Burton is the imperturbable Jeeves, stepping out of his serene composure to portray Bertie’s goofy pal Gussie Fink-Nottle; Gussie’s betrothed, silly starry-eyed Madeleine Bassett; Madeleine’s father, the apoplectic Sir Watkyn; and sexy flapper “Stiffy” Byng (played as a cross between RuPaul and Frank-N-Furter).

Eddie Korbich’s twitchy, wheezing Seppings becomes, among others, Aunt Dahlia and Roderick Spode, the large, intimidating leader of the Brit-fascist Brown Shorts (“They were all out of brown shirts”) who, as Bertie tells us, has “an eye that could open an oyster at 60 paces.” (Spode is one of the rare examples of Wodehouse dipping a toe into actual politics of the day.)

Wodehousian bon mots are sprinkled throughout the script. At a moment of crisis Bertie exclaims, “The news struck me like one who, picking daisies on the railway, gets the 4:15 in the small of the back.” [Footnote for aficionados: This is a paraphrase of a description originally applied to one of Aunt Dahlia’s explosive reactions.]

Much of the hilarity arises from the sudden requirements of the trio’s impromptu dramatization. Sir Watkyn’s quick-change costume includes a briar pipe attached to his mustache, which comes off every time he gestures with the pipe. Madeleine’s getup is extemporized out of a hastily snatched curtain and a fringed lampshade. The improvisations reach a chaotic pitch when Sir Watkyn and Stiffy (both played by Jeeves) have to be onstage at the same time – a dilemma brilliantly solved with a two-sided costume. 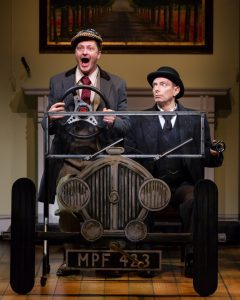 A lot of the sight gags derive from the ever-changing set. A single wall stands in for numerous rooms via a crank that changes the picture hanging above the fireplace. A touring car is created out of a cardboard grille and a free-floating steering wheel. The stage turntable, in the play’s mechanical era, is bicycle-powered.

Having lived in England for years, I’m a great fan of British humor (that is, humour), but not so much of Americans trying to do it. Here, two-thirds of the cast do a creditable job with the accents and manners. Those two are Korbich and Burton, who play everyone but Bertie. Burton is the more inventive and amusing – though oddly, his Jeeves is the weakest of his characterizations. As my brother remarked, he’s “too bland.” Wodehouse’s Jeeves, he observed, is impassive, but not passive. “He has a natural authority that comes from his self-assured presence, not just his deadpan.”

Chandler Williams, as Bertie, is at the center of the action, the subject and object of all the goings-on. Williams’ greatest talent is his physicality, a loose-limbed agility that expresses itself most often in his long John Cleese-ish legs. But he works much too hard, to negative effect. Where Bertie is daffy and affable, Williams is broad and loud. He, and sometimes the others, overplay the gags, stepping on Wodehouse’s witty lightness of touch.

“I was prepared to be skeptical and expecting to be disappointed.,” said my brother, who owns a complete set of Wodehouse books and has read them all. “It started slow, but got better and better. On the whole, I liked it. I would recommend it.”