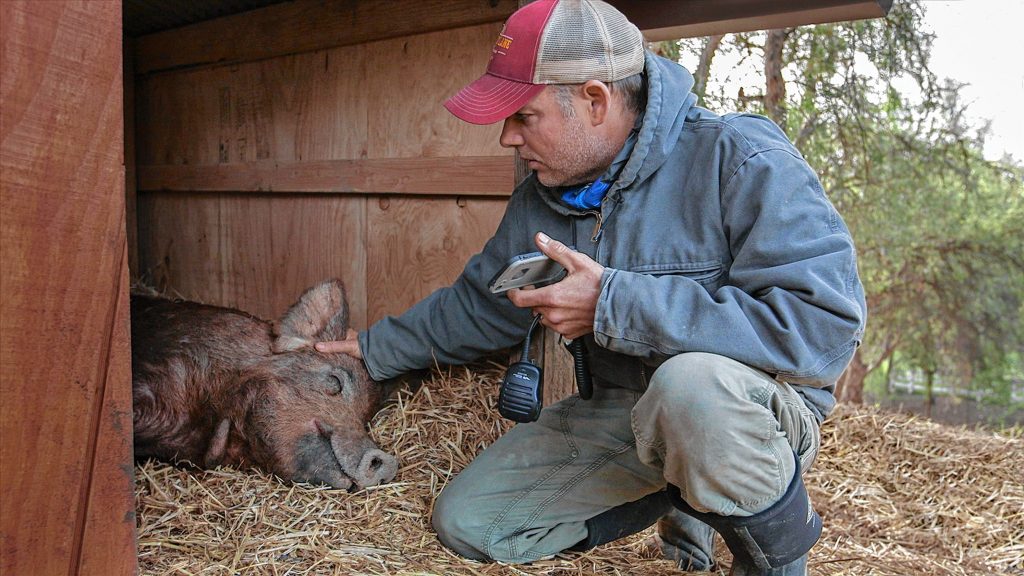 Spring in the Pioneer Valley always brings with it the sweet reminder of how lucky we are to be surrounded by so many working farms. Drive down just about any road that leads into or out of one of our bigger towns, and you’re sure to coast by a few coolers with “Fresh Eggs” signs leaning against them, and horses, cows, pigs, and more are as common here as protest signs (another nice thing about living in the Valley, I think). Our supermarkets — and not just the smaller and more expensive among them — carry lots of local fruits and vegetables, and the very air itself sometimes gains a certain tang when the winds carry just right.

But it’s one thing to sit and rhapsodize about farms, as I am right now, at a roll top desk in a dry, heated, house, while my children sleep upstairs to the sound of pond life looped on an old iPad. It’s quite another, one imagines, to be (maybe literally) knee-deep in the muck of it, doing the hard work of helping things grow. This week, a film comes to the Valley that offers a remarkably vivid look at the challenges and rewards that come with modern farming.

The Biggest Little Farm is John Chester’s new documentary that charts the hard birthing of Apricot Lane Farms, the 200-acre dream of Chester and his wife Molly. Lighting out from Los Angeles in 2011 (where John Chester, as luck would have it, had a career filming nature and wildlife for Animal Planet), the Chesters — with the backing of a wealthy and very patient investor — settled in 40 miles north of the city and found… not much. In the middle of a brutal drought, the land they had come to work was brown, dry, and nutrient-depleted.

The transformation that follows their arrival is a testament to the couple’s commitment to building a naturally diverse farm that is its own best ally. Along with the hundreds of different crops they plant (over 75 varieties of stone fruit alone) the farm is now home to a menagerie that has built up over the years as problems found solutions: the Khaki Campbell ducks that stroll the farm and provide eggs were initially brought in as a pest control solution, to deal with the snails that were eating the farm’s tree leaves. Other animals trim the lush grasses, provide manure, and so on. If it’s all a bit of a balancing act, it’s one that works; the biodiversity and biomimicry that are Apricot Lane’s calling cards may take more creative thought and patience than other modern farming methods, but if you have the time and money to make it work it’s tough to argue with the end result.

The screening at Amherst Cinema, presented in collaboration with Community Involved in Sustaining Agriculture (CISA), is part of the ongoing Science on Screen series, which pairs films with talks from local experts in related fields. Along for the discussion are CISA Special Projects Director Margaret Christie; Missy Bahret of Old Friends Farm in Amherst; and Harrison Bardwell of Hatfield’s Bardwell Farm.

Also this week: In celebration of Earth Day, Holyoke’s Gateway City Live in a collaboration with Kestrel Land Trust presents a screening of The Lost Forests of New England: Conserving Our Remnant Old-Growth Forests. The free event features director Ray Asselin’s 2018 film about the old-growth trees of our region, and the drastic changes to those forests — and by extension, to the wider wildlife that lived or would come to live in those forests — brought on by the arrival of European settlers. Old-growth tree expert Bob Leverett, who is featured in the film, will also be on hand for a post-screening Q&A with Asselin and botanist Jared Lockwood.