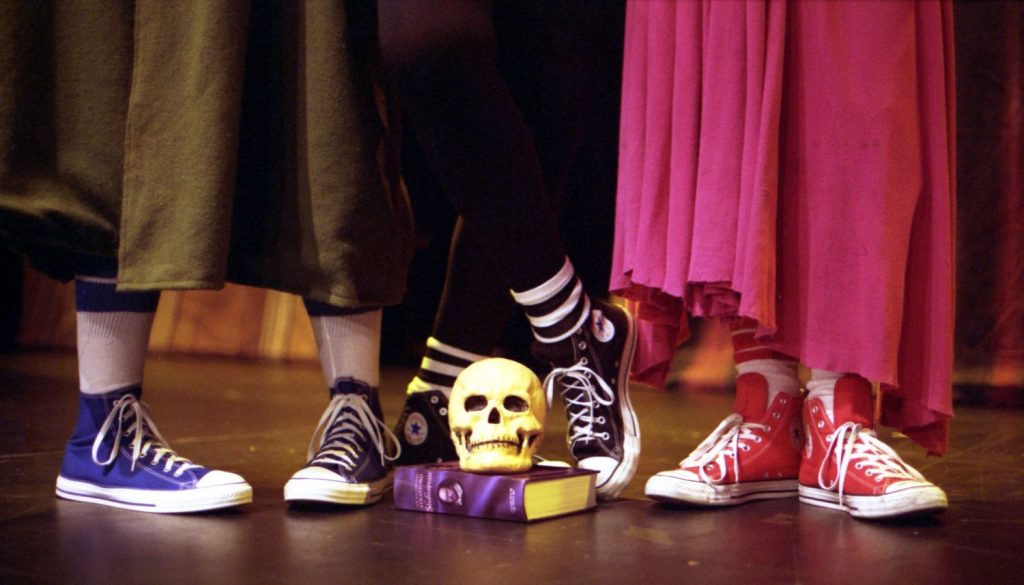 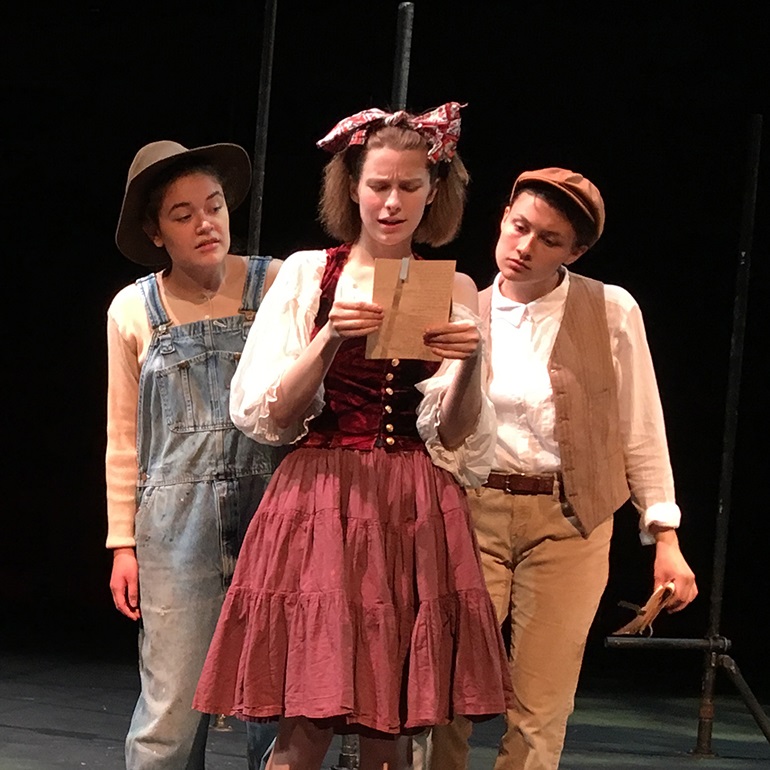 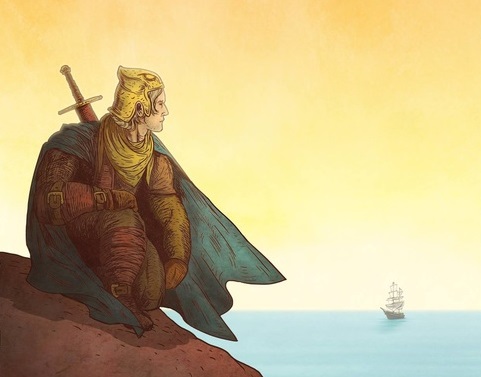 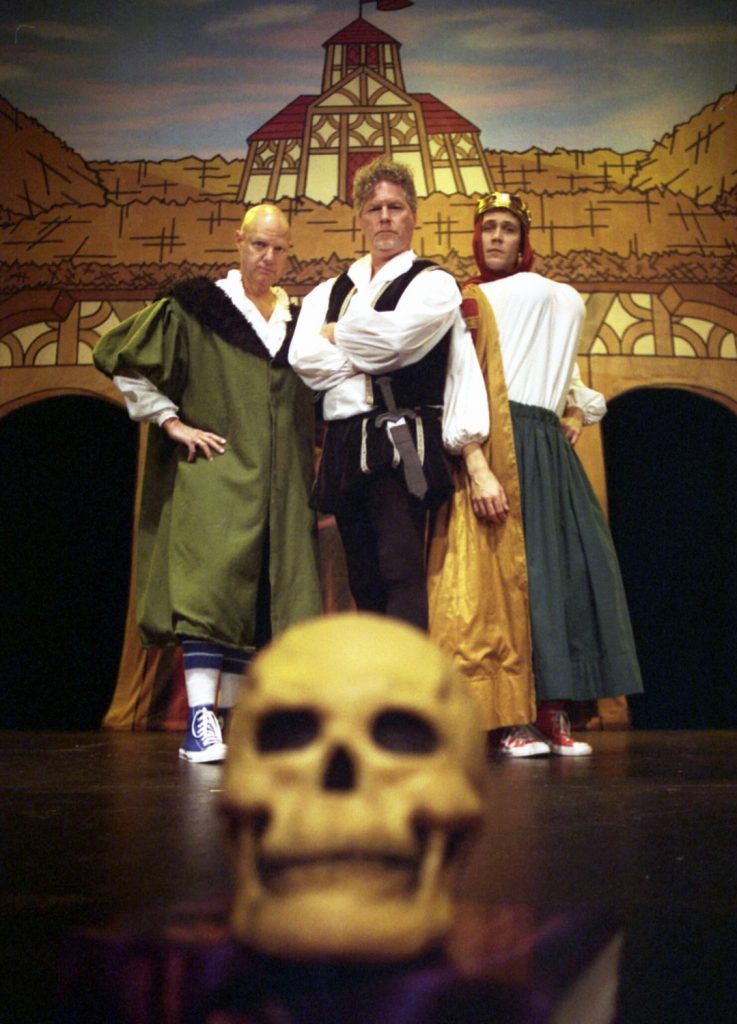 It’s the Bard’s birthday next week, and three shows on area stages are celebrating it. (Shakespeare’s actual birthdate is unknown, but it was sometime around April 23, 1564, and since he died on April 23, 1616, that symmetry has become traditional.)

This weekend and next, Smith College’s theater department mounts an all-female As You Like It. A new troupe called the rig stages an abbreviated Pericles in Easthampton and the Berkshires. And on the day itself, the UMass Fine Arts Center presents The Complete Works of William Shakespeare (abridged) [Revised].

“Shakespeare wrote As You Like It for an all-male cast,” Daniel Elihu Kramer reminded me recently. He’s directing the production that plays April 19-20 and 25-27 in Smith College’s Theatre 14. 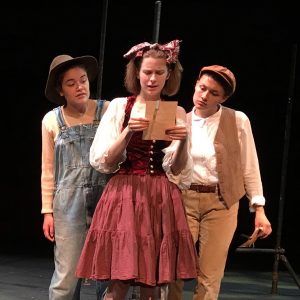 Whew! That is, in fact, an accurate rundown of the gender corkscrew that drives the play, in which Rosalind, disguised, flees the treacherous court of an evil duke with her cousin Celia, and arriving in the sanctuary of the Forest of Arden, runs into the young Orlando, who’s love-sick for her but thinks she’s a boy.

“Certainly, then, a cast of fifteen female-identified actors playing women and men have something to offer the play,” Kramer says, resting his case. “Journeying to the green world of the Forest of Arden opens both hearts and possibilities. One of those possibilities is love, which turns out to come in many more forms than the world of the court could ever have imagined.”

Just as the play’s several sets of lovers are surprised by romance, “we have a few surprises for our audience, starting from the moment they walk into Theatre 14,” he adds. (Those surprises include an unorthodox entry into the theater, so there’s no late seating or re-entry.)

the rig is a new initiative whose founders believe that “theater belongs to all of us, and we reimagine the possibilities of professional theater,” performing in non-theatrical spaces for “audiences that may have limited access to the arts, free of charge.” (The name is a nod to traveling circuses, whose aerial rigs can be erected anywhere.) 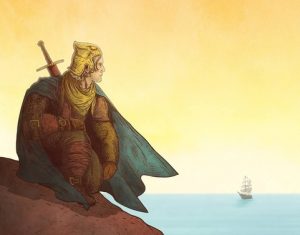 Its inaugural production brings Shakespeare’s “late romance” Pericles, a notoriously troublesome play, to audiences who may never have even heard of it, or have been baffled by its sprawling narrative and multitudes of characters. Founder/director Kelly Galvin has cut that knot by condensing the script to a breathless 75 minutes and the cast to five multitasking professionals. Most of them are actors associated with Shakespeare & Company: Caroline Calkins, John Hadden, Zoë Laiz, Tanya Avendaño Stockler and Ryan Winkles.

Reduced to its essentials, Galvin says, “Pericles is the heartrending, funny and fantastical story of a family separated at sea and reunited by fate.” The epic sweep of the original involves Prince Pericles in an odyssey of improbable adventures, finally resolving in a family reunion that foreshadows Shakespeare’s Winter’s Tale.

The company’s maiden voyage includes a series of performances in the Berkshire region for groups of veterans, elders in assisted living and the homeless. There are also two public showings next week, at The Foundry in West Stockbridge on the 25th, and Easthampton’s Eastworks on the 26th. Tickets are free, but audiences are invited to “pay what you can” and urged to reserve in advance.

I’ve seen Pericles before, and several others in Shakespeare’s back list, but not everything the guy wrote – except, that is, in the mini-versions dished up in The Complete Works of William Shakespeare (Abridged). 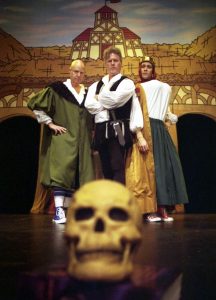 In this irreverent fast-forward through the entire canon, three actors manically summarize, condense, parody and improvise their way through every known work of Shakespeare in just over 90 minutes. The piece thrives on irreverence, anachronism and hectic energy. A passing acquaintance with the famous plays is assumed (Hamlet and Romeo and Juliet are given full-blown parodies) but you don’t need to be a Bardolator to get into it.

In the version coming to the UMass Fine Arts Center Concert Hall on Tuesday (the Birthday), performed under the banner of the original Reduced Shakespeare Company, there’s an addition to the title: [Revised]. The show, now three decades old, has received a 21st-century updating, with fresh and topical material inserted among the most popular bits.

For me, those perennials include all the history plays covered as a football game, with the crown tossed among all those Henrys and Richards, a hip-hop Othello, the bloodthirsty Titus Andronicus as a cooking show, and all of the Bard’s favorite comic and romantic plot conventions, including girls-as-boys, in a single all-purpose story that takes care of 15 plays at a stroke.

The Reduced Shakespeareans caution that the show, “in the spirit of Shakespeare himself, contains some occasional bawdy language and mild innuendo. All children (and parents) are different, so we’ve chosen to rate our shows PG-13: Pretty Good If You’re Thirteen.”