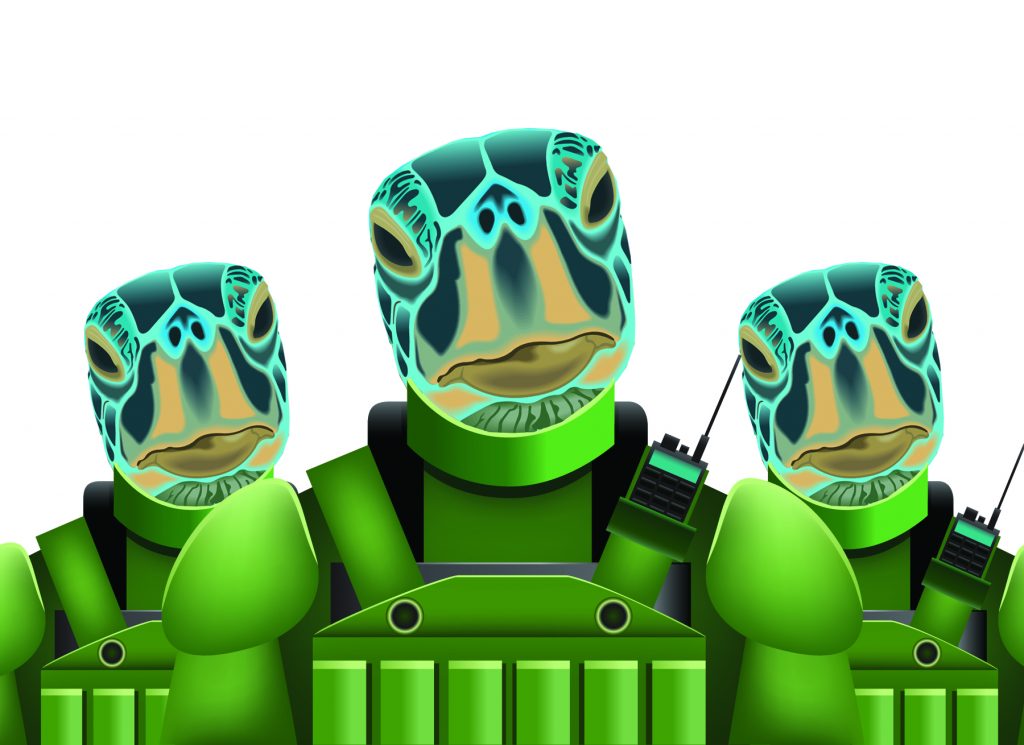 A man from Florida (yes, it’s one of those Bizarro Briefs) who calls himself “the saint” threatened to unleash the potent power of his turtle army to destroy people in the town of Indialantic, according to the town’s police department. The 61-year-old Florida man was also accused of yelling obscenities and causing disturbances at businesses along North Miramar Avenue, including Starbucks and Sassy Granny’s Smoothies. The man was quoted as saying to a 911 responder that another police officer “needed to leave now or you will all be sorry you fucked with the saint,” according to a local Fox affiliate. He was charged with three misdemeanors.

A mystery is afoot! Some mysterious perpetrator has been leaving mashed potatoes on the front porch of unsuspecting residents of Jackson, Mississippi, in the dead of night. Some think this may be just a practical display of joviality, but no! Other neighbors on social media think it might be a game most deadly — poison! However, that theory has yet to be proven correct. No members of the constabulary have been involved at this time. But many just think this “mashed potato maniac” is just a harmless schoolyard prank. Oh you rapscallion!

The owner of a U.S. border-town bed and breakfast is in hot water after being charged with 21 counts under the Immigration Act for “inducing, aiding, or abetting” seven people who attempted to enter Canada illegally. The name of the B&B? The Smuggler’s Inn. The Blaine, Washington bed and breakfast, just feet away from the British Columbia border, was the spot where alleged offences occurred between May 2018 and March 2019. The man has owned the Smuggler’s Inn for more than 20 years and he told CBC News two years ago during an interview that it was common to see people crossing the border at night using night-vision goggles. Was that his Breaking Bad moment?

Police deputies responded to a 911 call in Washington County, Oregon, for a burglary in process at a woman’s home. They ended up catching the culprit. It was a robot vacuum cleaner that was trapped in her bathroom. The woman called 911 after she reporting seeing a stranger in her bathroom and found that the bathroom door was locked. She said she could see shadows moving under the door. Minutes later, several deputies surrounded the home, called a K9 backup team, and also heard rustling noises coming from the bathroom. After calling to what they thought was a suspect several times over a loudspeaker, they went into the home with guns drawn and found the robot crashing around on the floor. The word’s out on whether deputies filed charges due to this incident.

Three women in Florida (yes, again) are behind bars after lounging in the nude at a rest stop and then leading Pasco County police officers on a high-speed chase. One of the women also tried to attack officers with a pink baseball bat, according to the police department. Someone reported seeing the women off a rest area off of Interstate 75, according to WFTS-TV in Tampa Bay, Florida. A Florida Highway Patrol officer responded to the call and she questioned the nude suspects, one of whom said they had showered and were “air drying.” The three suspects then got into a white 2009 Nissan Sentra and drove away before questioning was finished. Troopers then tracked down the suspects in a convenience store parking lot. That’s when the pink baseball bat came out, which led to a high-speed pursuit. The car was eventually stopped by using spike strips.

A substitute teacher in Millbury is out of a job after bullets fell out of his pockets during a class. “Don’t bring ammunition to your job” seems like a common sense rule, but this substitute teacher must have missed class that day. The unnamed teacher was covering a pre-kindergarten classroom at Elmwood Street School in Millbury, Mass., when the incident occurred. Another teacher heard the bullets hit the floor and notified the principal. The teacher claimed he had been shooting the day before. In the end, the Millbury Police Department suspended the teacher’s license to carry firearms and seized six handguns, 12 shotguns and rifles as well as ammunition from his home. It came as no surprise that the superintendent fired him.

Workers on an oil rig in the Gulf of Thailand rescued a dog stranded in the water 136 miles from shore. The workers spotted the dog struggling in the water and called out to her to swim up to the equipment. The dog was plucked out of the water and sheltered for two days. She was then transferred to a vessel bound for Songkhla, Thailand, and taken to a veterinarian. One of the oil rig workers now wants to adopt the dog, assuming that her owner isn’t found. No one’s quite sure what happened to the pooch at this time, whether she fell from a boat or not.

Attack of the car spider!

Police in New York State discovered that an accident was caused by a driver who lost control of her car because there was a spider inside. The Cairo, N.Y., Police Department responded to the crash along with fire, ambulance, medical personnel, as well as the Greene County Sheriff’s Office when the vehicle crashed. “We know that it is easier for some drivers than others but PLEASE, try to teach new drivers and yourselves to overcome the fear and pull over to a safe place. Lives depend on it,” the department wrote in a statement.