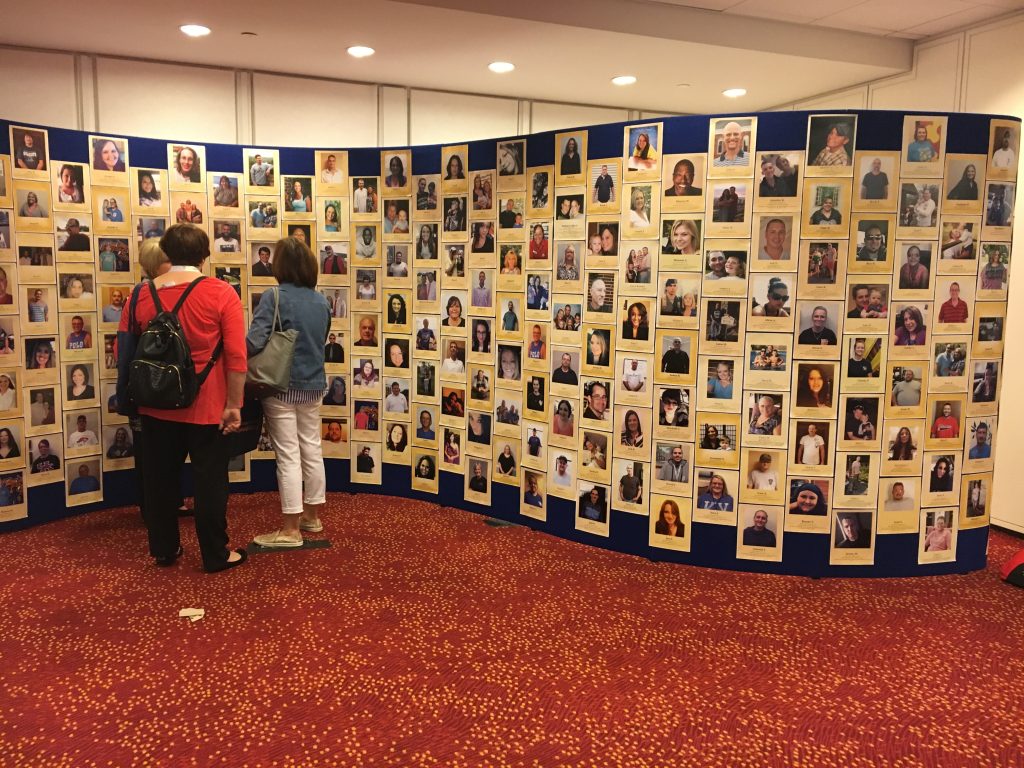 Known as the DART program — and now replicated in almost all Hampshire County police departments — DART sends teams of police, harm reduction educators, and recovery coaches out to visit with people who have recently survived an opioid overdose. Their primary goal is to talk and build relationships.

They don’t force treatment on to anyone, but they discuss how to use in safer ways, provide people with the overdose-reversal drug Narcan, and offer information about medication assisted treatment.

“When I came back from the conference, I went to every agency that is part of the opioid response in our community so they could put a face to the name,” said Van Buskirk, who was Northampton’s first DART officer and is among a delegation of people from Hampshire County at the conference in Atlanta this week.

Full disclosure: I am accompanying the delegation as a guest of Hampshire HOPE specifically to file news reports out of the conference. As director of outreach and education at the office of Northwestern District Attorney David E. Sullivan, I’m one of several people in the office who collaborate with Hampshire HOPE in its efforts to reverse the trend of overdose deaths in our community.

In that role, I coordinate a monthly column that appears on the health pages of the Daily Hampshire Gazette and engage in other education and outreach efforts. The Advocate will be posting stories out of the conference every day this week and publishing one in print in next week’s issue.

The summit, first held in 2012, is the largest prescription drug and heroin conference in the country, unique in that it draws people from all levels of government and professional sectors addressing the epidemic, including treatment providers, academic researchers, law enforcement, family members of people who have died opiate related deaths. Organizers say, “It is the event for decision makers and allied professionals working to address this public health emergency.”

It runs from Monday through Thursday this week, drawing between 3,000-4,000 people from around the country. There are daily keynote talks and plenary sessions as well as dozens of breakout sessions that go into depth about promising and evidence-based initiatives, new research findings and information from federal law enforcement about drug trafficking patterns and national efforts to stem the illegal and deadly supply of opiates.

The breakout sessions are organized into tracks, such as public health, prevention, law enforcement, treatment providers, federal government, social work, corrections and harm reduction, so that people can easily focus on sessions most relevant to their work.

Van Buskirk said he likes to go to different tracks in addition to law enforcement because that gives him greater insight to a wide variety of perspectives and approaches to the epidemic.

“You’re learning how each of them contribute to the opioid epidemic and all of those tracks have confronted different hurdles,” Van Buskirk said. “We can have an inside view of how all of them are trying to combat this crisis.”

Sullivan said the role the summit in the county’s efforts to save lives in the opiate epidemic can’t be understated. Among the benefits are:

In fact, Sullivan said DART was created based on different bits of programs she and Van Buskirk learned about around the country at previous summits, which helped them create a model that best works in Hampshire County.

“It’s really the only one like this in terms of the number attending and the presence of people from grassroots, local, county and state and high ranking government officials,” she said. “This is also a chance for people at the federal level to hear what’s happening locally.”

Sullivan noted that efforts to respond to the opioid overdose crisis have largely been bipartisan, though the approaches promoted are not always the same.
While she believes Trump’s appearance “sends a message that it is an issue that is a priority for the government,” his appearance will be significantly different from that of former President Obama in 2016.

Obama sat on stage and lead an informal chat with experts in the field and people in recovery.

“It wasn’t about him, it was about the experts in the room and him hearing their voices,” she said. “Trump is going to make an address and talk at the crowd.”
She plans to attend to hear what he has to say, as do other members of the delegation.

For Van Buskirk who first attended in 2017, and has come every year since, the experience has been invaluable in opening his eyes to different approaches and has been a driver in his commitment to give innovative ideas a try back home.

“Every time I come, there’s some type of new initiative and I gain a new perspective on how to treat someone differently,” he said. “So for me, that’s priceless.”

This year, Van Buskirk encouraged other DART officers to attend so they too can develop new tools and skills in their work with people ensnared in the epidemic. Also this year, Sullivan will be presenting on the DART program in a plenary session on opening day highlighting 10 promising practices from around the country. Farry is lined up to present Wednesday about a new data collection effort Hampshire HOPE is launching.

“The fact that HOPE has two presentations speaks very highly to the work we are doing,” Sullivan said. “We are really ripe to be leaders in Hampshire County around this issue and that becomes very evident when you’re at this conference.”