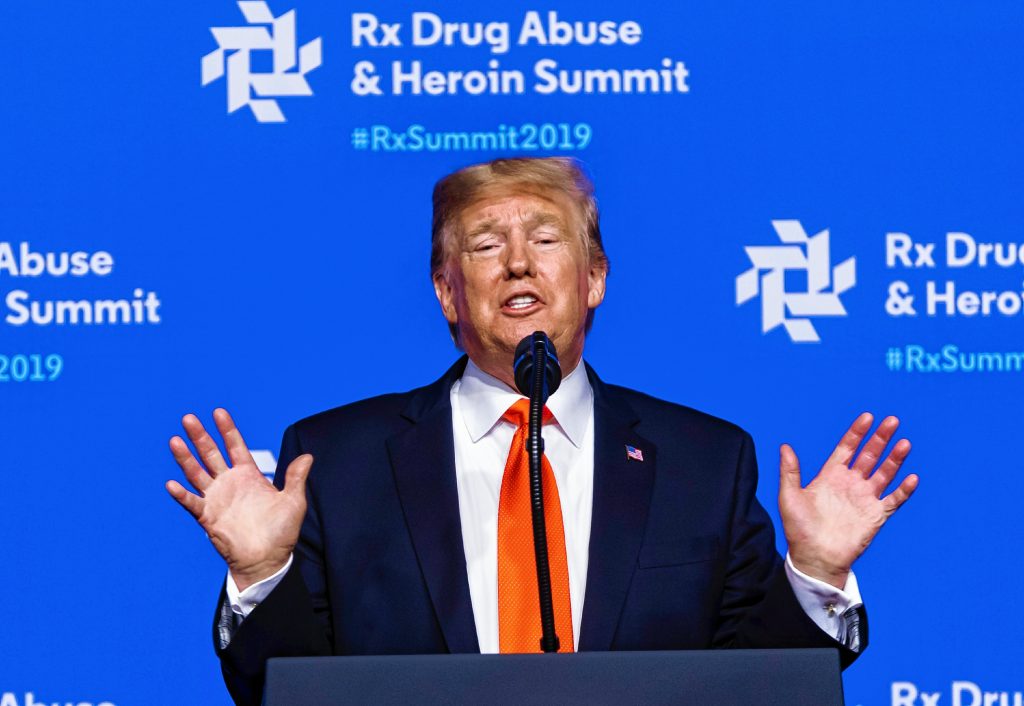 In months to come, this may become a point of dispute in the history of the national RX & Heroin Drug Summit: The 2016 appearance by President Barack Obama drew a larger audience than did President Trump’s keynote in 2019.

And Sean Spicer won’t be there to settle the matter.

President and Melania Trump Wednesday addressed participants in the Centennial Ballroom at the Hyatt hotel, the venue this year for a conference billed as the largest annual conference addressing the nation’s opioid overdose epidemic.

In his 40-minute talk, during which he appeared to largely stick to the teleprompter script, Trump promised the full force of the federal government “to liberate Americans from the grip of addiction and to end the opioid crisis once and for all.” He also said faith-based initiatives can expect support from the federal government in the effort to push back the opioid epidemic.

His speech drew about 2,500 people from the conference who waited in line for hours to pass through security and get into the ballroom where he appeared, alongside Melania Trump and KellyAnne Conway. Once in the ballroom, the crowd waited another two hours with speakers blasting music, including Tina Turner’s “Simply the Best” (which played more than once.)

“My administration is deploying every resource at our disposal to empower you, to support you, to fight right by your side,” he said. “We will not stop until this job is done. We will succeed. We have results that are unbelievable. We’re making tremendous progress.”

Last year the federal government provided $90 million to efforts to prevent substance use among youth, he noted.

“My surgeon general,” he said, is working tirelessly to expand access to treatment resources and other services.

President Trump also claimed credit for securing $6 billion in new funding to combat the opioid crisis and has allocated $2 billion in opioid response grants to states, and “we’re going for even more,” he said.

Trump stopped several times during his speech to invite people seated on the stage to the podium to say a few words, standing next to them, occasionally giving a thumbs-up sign to people in the audience. Among those who gave brief remarks were two people in recovery, two police officers and a state trooper whose son died of an opioid overdose in 2017.

A contingent of people from Hampshire County, including J. Cherry Sullivan and Michele Farry, coordinator and assistant program coordinator for the Hampshire HOPE opioid prevention coalition run out of the city of Northampton were in the audience for the event.

Sullivan noted that many of the accomplishments Trump cited have been in the works for quite some time.

“A lot of what he shared is public health prevention work, which takes time to see results, and while he cited improved numbers during his administration, we know the work started years ago, because prevention takes time.”

Trump then launched into signature items from his stump speeches with tenuous connections to the subject of the summit, namely the economy and the wall.

People released from jails and prisons can find jobs “because our economy is doing so well, the best it’s ever done in our history,” he said. “The best of everything.”

Regarding the wall, he said though “the media doesn’t like it,” one will be built and it will be ahead of schedule.

“We’ve secured historic funding to strengthen border security, including equipment, including the wall and some things you don’t even want to know about,” he said. “Beautiful, great, strong, powerful equipment.”

Dogs are also used at the border, and Trump said sometimes they work even better than all the equipment.

“We also have a lot of dogs and they’re great dogs and we cherish them,” he said.

He railed at drug companies that inflate prices in the United States and create a rigged system that hurts “our great seniors.”

Here he took a detour. “I know all about the rigging of the system because I had the system rigged on me, and you know what I mean,” he said. “And that’s going to be the sound bite tomorrow.”

After he waved goodbye and departed the stage, the audience filed out amid music blaring, this time, the Rolling Stones’ “You Can’t Always Get What You Want.”

Laurie Loisel, director of outreach and education at the office of Northwestern District Attorney David E. Sullivan, is accompanying the Hampshire HOPE delegation at the RX Drug & Heroin Summit as a guest of Hampshire HOPE specifically to file news reports out of the conference. She also attended the Summit and President Barack Obama’s in 2016.