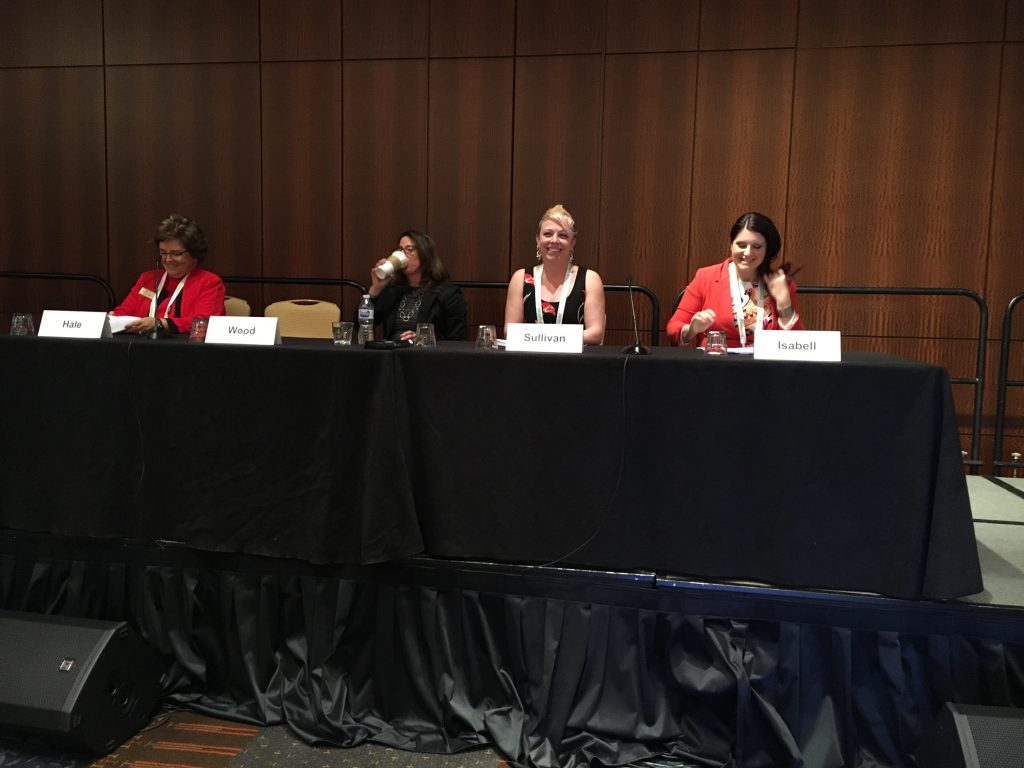 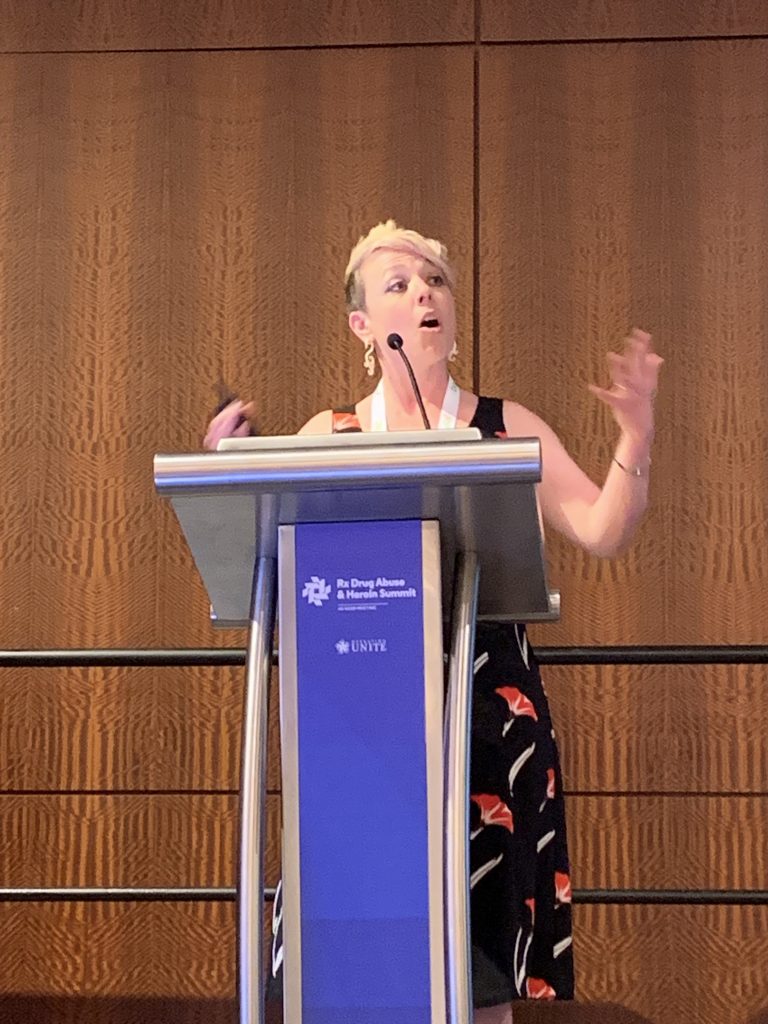 As co-founder of the Kentucky-based Voices of Hope, a nonprofit that promotes and supports lifelong recovery, Alex Elswick, a former heroin user who now says he is “recovering out loud,” knows the hard way about substance misuse, addiction, sobriety and recovery. 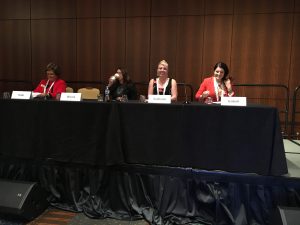 Seen here is a discussion panel at the RX Drug & Heroin Summit in Atlanta, Georgia.

At the national prescription drug and heroin conference, Elswick offered snippets of his struggle with prescription opioid misuse after dental surgery when he was 18. That experience was followed by full-blown addiction that lead to heroin use, several stays in rehab, and time living on the streets until he finally found treatment that worked. That treatment, he said, took time — requiring first a lengthy inpatient stay, followed by an intensive outpatient program after which he engaged in therapy and recovery support services.

Sobriety, he said, is when you put down the substances that wrecked your life, while recovery is all the things you do instead. In no uncertain terms, Elswick told the audience what it took for him to get to the place he is today, thriving in long-term recovery.

“We didn’t get into this situation overnight and we’re not going to get out of it overnight,” said Collins. “We need all hands on deck, sleeves rolled up, for the long-term.”

The largest prescription drug and heroin conference in the country, the summit, first held in 2012, attracts people from all levels of government, academic researchers and professionals on the ground addressing the epidemic. It also draws elected representatives, people in recovery, their families, and people whose loved ones have died opioid-related deaths. This year’s drew between 3,000-4,000 people from around the country, including a large delegation from the Hampshire HOPE county opioid prevention coalition based in the Northampton Health Department.

In his remarks, Collins announced the HEAL initiative (Helping to End Addiction Long-Term), which aims to speed up scientific solutions to the opioid crisis. The effort will spend $1.1 billion in fiscal year 2018 on research into opioid misuse and addiction and pain. It includes funding for four research sites whose goal is to reduce overdose mortality by 40 percent within three years.

Volkow said the urgency of the problem requires bold action.

“We don’t have time on our hands,” said Volkow.

Among the four research sites (each located in states heavily impacted by the opioid epidemic) is one at Boston Medical Center, which will be working with at least 15 partners around the state, including in Belchertown, Ware, Athol, and Holyoke.

Each study site will measure the impact of integrating evidence-based prevention, treatment, and recovery programs in primary care, behavioral health, schools and the criminal justice system. Among the strategies they will implement or expand dramatically are medication-based opioid treatment, long-term treatment options, greater access to recovery support services, and increased distribution of naloxone.

The other research sites in the program are the University of Kentucky, Columbia University in New York City, and Ohio State University.

Here is a small sampling of other themes explored at the summit:

J. Cherry Sullivan, Hampshire HOPE coordinator, presented a HOPE initiative as one of nine promising new programs launched around the country. The DART (Drug Addiction Response Team) program is based on the principles of harm reduction, she said. DART sends teams of police, harm reduction educators, and recovery coaches out to visit with people who have recently survived an opioid overdose, aiming to talk and to build relationships. 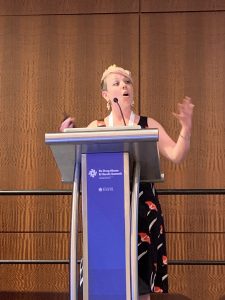 “Every non-fatal overdose is an opportunity for some sort of intervention, some sort of connection with people, and we really wanted to capitalize on that moment,” Sullivan said.

“Data can be scary, but if you allow the story that the data tells to be your focus, it comes alive. The real challenge lies more in developing the questions you need answers for with your data and staying open-minded about how to guide the data to get answers,” said Farry. “Our data can enrich the work we all do and we have a responsibility to allow that data to drive the work.”

ACES must be addressed

A session titled “Caring for the Hidden Victims: Strategies to Support Children and Youth Exposed to Opioids,” addressed the landmark Adverse Childhood Experiences study, known as ACES, which found that the impact of trauma in childhood was a predictor of a wide range of poor health outcomes later in life. Having a parent who is struggling with addiction is one such traumatic life experience, which means efforts to address the opioid crisis must also take into account the children of people who suffer from the disease of addiction.

“There is a lot of emphasis, and rightly so, on adults who suffer from substance us disorder, but we know that children in their homes are affected directly and indirectly,” said Loraine Swanson Lucinski, senior project director at the Waltham-based Education Development Center. “We need more people asking where are the babies as we think about helping parents with substance use disorders.”

“When students are exposed to trauma at home, they don’t check their trauma at the door when they go to school,” he said. “Schools need to be thinking about that.”

Teachers and other school staff should be trained to spot red flags for students experiencing trauma, symptoms that include poor concentration, irritability, sadness, and depression. A strong relationship with a caring adult can be a mitigating factor.

“It’s important for schools to think about how can we have our adults develop positive relationships with children, particularly those who have experience trauma,” he said.

Laurie Loisel, director of outreach and education at the office of Northwestern District Attorney David E. Sullivan, accompanied the Hampshire HOPE delegation at the RX Drug & Heroin Summit as a guest of Hampshire HOPE specifically to file news reports out of the conference.