Last year, Northampton City Councilor Marianne LaBarge cared for a dear friend as she died from esophageal cancer. Near the end, LaBarge says she couldn’t breathe well, even on oxygen, and was in tremendous pain, even on pain medications.

“She was begging to breathe,” LaBarge recalled painfully. “It was just terrible to see her fade away.” 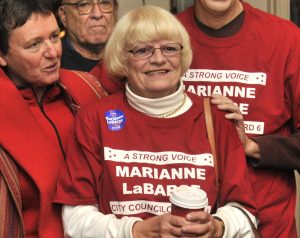 Northampton Ward 6 City Councilor Marianne LaBarge, center, with supporters. LaBarge has been a vocal advocate for death with dignity legislation.

Watching loved ones die in pain — including her father, who told her at the end of his life, “I can’t fight this anymore, it’s too strong” — has made LaBarge into a vocal advocate for The End of Life Options Act, a bill that’s being reintroduced by Rep. Louis Kafka, D-Stoughton, in the Massachusetts House of Representatives this legislative session. A similar measure is being introduced in the state Senate (it must pass both, before moving to the Governor’s desk). If enacted, the bill would allow terminally ill patients who are of a sound mind to end their lives themselves or with assistance from a health care provider, who “may choose whether to voluntarily participate.”

“I feel strongly that it’s our personal, individual choice — our civil rights — to choose how we want to die with respect and dignity if our lives are ending with a disease that only gives you six months to live. No more pain or suffering,” said LaBarge.

Alberto “Tito” Gambarini, 96, of Easthampton, says the bill offers “hope in long remission” — hope that people do not need to suffer in pain indefinitely. Like LaBarge, Gambarini says he has watched loved ones suffer tremendously at the end. And that’s not the death he wants for himself. 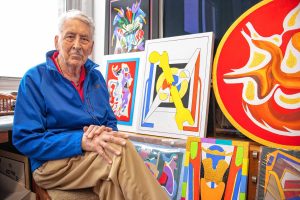 Gambarini, who is originally from Argentina, worked as a cardiac surgeon at Hartford Hospital for 35 years before reinventing himself as an art teacher at Rhode Island School of Design. Since the 1970s, he has been diagnosed with cancer four times — stomach cancer at 71 years old, prostate cancer at 73, bladder cancer at 75, and most recently spinal cancer at age 90. “I know I have failures — bowel failure, urinary failure, vision failure.… I am very old. You don’t live forever.” He is in remission now, but if his spinal cancer were to cause his vertebrae to collapse, “that’s the most painful thing you can imagine,” Gambarini said. “I don’t want to suffer at the end.”

Gambarini is a strong supporter of the End of Life Options Act. But while he’s an advocate, he stresses the importance of medical control and oversight.

Speaking from his experience as a surgeon, Gambarini says that pain management is unique to each patient. Dr. Paul Jodka, a palliative care physician at Cooley Dickinson Hospital, notes there is no single drug that’s “effective or indicated for all conceivable situations.” Gambarini says he has seen death happen many times firsthand, both painfully and peacefully and says this bill emphasizes the importance of quality of life over quantity of years. 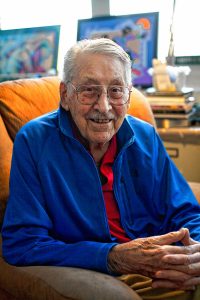 Alberto “Tito” Gambarini in his apartment at Eastworks Wednesday, March 13, 2019.

He sits in an armchair with a cane resting at his feet. Hanging on the wall above him are a dozen or so of his abstract paintings that were displayed at one point in the United States Supreme Court building. On a nearby shelf is a petition inscribed with dozens of signatures from people who also support the bill, which Gambarini has personally collected. Besides collecting signatures, Gambarini gives presentations about the issue at local places like Cancer Connection in Northampton and has written numerous letters previously published in newspapers.

While advanced in years, Gambarini is still full of life. He keeps himself physically active and mentally stimulated. Hundreds of his own paintings line the walls of his apartment. A few depict Charlie Chaplin movies he watched with his late wife Elsa — who died at age 73 in 2011 with ovarian cancer after experiencing a great deal of pain. He awakens at 5 a.m. every morning and exercises at Strength for Life gym at Eastworks. He visits with friends or family and periodically gives presentations at the Cancer Connection, drawing from his experience as a cardiac surgeon. He also leads art classes at the senior center.

At night, he can often be found making art into the wee hours of the morning while listening to tango music and drinking red wine. Gambarini says he’s happy and still finds humor in adversity. But if and when his health declines, he’d like to peacefully reunite with his wife.

The End of Life Options Act

Since being introduced in 1995, versions of The End of Life Options Act haven’t ever made it out of the Joint Public Health Committee. In order for the bill to be taken up by the full House of Representatives and the Senate, it must first be approved by a simple majority in this committee, which is comprised of members of both the state’s House and Senate. During the most recent legislative session, the committee sent the bill to be studied last summer, ending its chances of passing in 2018.

In 2012, a statewide ballot initiative similar to the End of Life Options Act failed to pass by the bare margin of 51.9 percent to 48.1 percent of voters in the 2012 election, even though most polls showed a majority of voters supported it. This followed a vigorous ad campaign against the measure in the days leading up to the vote, which outspent supporters by $5 million to $1 million.

Years later, however, the Northampton City Council and Amherst Town Meeting in 2017 each endorsed the End of Life Options Act, urging the state Legislature to approve it.

In Northampton, “After much public testimony and debate during two meetings, we voted nine-to-zero to pass it,” said LaBarge, who has been a city councilor since 1997 and sponsored the measure. 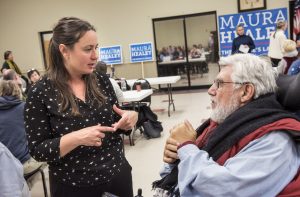 Chris Palames of Northampton, executive director of Independent Living Resources, an advocacy group for those living with disabilities, and chairman of the city’s Disability Commission who has lived with a spinal cord injury for 50 years, says he was one of the only local people who spoke out in opposition in 2017.

To date, the bill hasn’t gained a significant amount of support from lawmakers. This year, however, the outcome could be different. The makeup of the 17-member joint House and Senate committee has changed almost completely. Of the committee’s Senate members, only Sen. Julian Cyr is returning, according to Senator Joanne Comerford, D-Northampton, who serves as the committee’s co-chairwoman. The House has four returning members.

The bill is structured with safeguards intended to ensure that not just anyone can obtain life-ending medication. First, the patient must request the medication twice, once orally and a second time in writing. Two doctors, consulted at least two weeks apart, would then have to affirm the patient is expected to die within six months. Additionally, two lay-persons — including a non-relative who doesn’t work for a medical facility and doesn’t have a financial interest in the patient’s death — would have to witness the written request and affirm the patient isn’t under coercion, among other things.

Finally, the patient would have to visit a mental health professional such as a psychologist or social worker to attest “you are of sound mind and cognitively able, you’re not impaired, and you’re not under duress,” before a physician could prescribe medication, said John Berkowitz, volunteer director of the advocacy organization Western Mass. Death With Dignity.

Opposition to the measure

But many people fear those safeguards won’t be enough to protect patients from coercion, abuse, the danger of misdiagnosis, insurer profits, mental health issues, among other concerns, according to Second Thoughts Mass., an advocacy group that opposes the measure.

If an assisted suicide bill were to be enacted, Palames says he’s worried the state’s estate recovery law, which allows state healthcare agencies to claim losses after a patient has died, “will be used (by elders) late in life to protect their family from estate recovery and poverty. … We’re concerned that some people would, for the sake of their family, for passing on resources to their children or grandchildren, would make a decision to end their lives early.”

According to Medicaid’s website, state-run health care programs, “for individuals age 55 or older … are required to seek recovery of payments from the individual’s estate for nursing facility services, home and community-based services, and related hospital and prescription drug services.” An exception to that law is for enrollees who are survived by a spouse, have a disabled child or any child under 21.

Historically, disability advocates have come out in strong opposition to the measure. Palames says this is because those with disability understand the complexities of health care systems, and fear what might happen if doctors are able to prescribe life-ending medication. Personally, Palames says he once saw the state come after the estate of an acquaintance after his death, who was disabled, for $450,000.

“The concerns are that there are unintended consequences,” said Palames. “We have grave, grave reservations.” 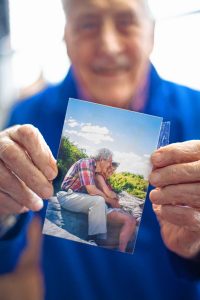 Alberto “Tito” Gambarini, 97, holds a photograph of his late wife.

The Massachusetts measure is one of many hundreds of similar bills that have been introduced in nearly 40 states since 1991. Oregon, which passed The Oregon Death With Dignity Act in 1997, was the first jurisdiction in the world to legalize medically assisted dying. Since then, medically assisted suicide prescriptions have been written for a total of 2,217 people, according to a Feb. 15 summary from Oregon’s Public Health Division. Of those, 1,459 people have died from ingesting the medications. Last year in Oregon, 249 people received prescriptions and 168 people died.

Gambarini has already talked to a doctor and his children about his wishes, and he’s hoping the End of Life Options Act will pass soon in Massachsuetts, he says.

“Over there, I have her ashes. My children promised me they’ll put our ashes together,” Gambarini said of his late wife. “I want to go to nature with her ashes. And maybe, you will hear us laughing together out there.”

Andy Castillo can be reached at acastillo@gazettenet.com.