Basemental: Music for a World without Jails 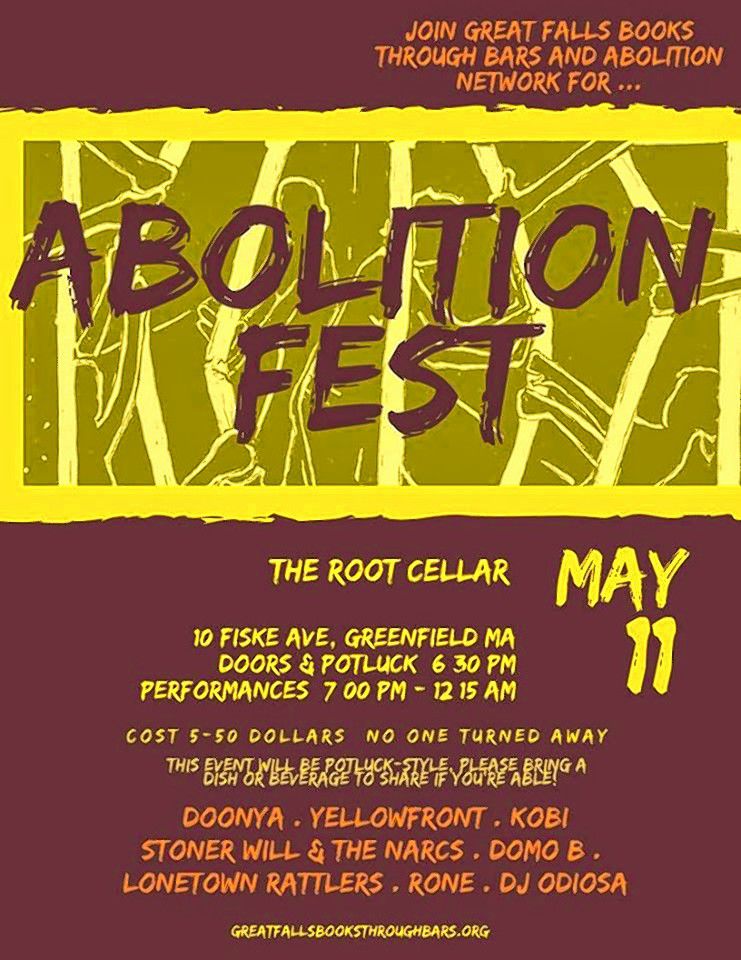 Before prisons became the inevitable institutions they are today, believe it or not, they were introduced as a reform; a humane alternative to torture or death. In 1790, English common law condemned those guilty of “petty treason” to the punishment of being burned alive. So it was in this light that the “reform” of prison was introduced. However, as a recent feature in the New York Times Magazine notes, today’s prisons are “not known, even by [their] supporters and administrators, for [their] humanity.” To this day, torture and death within the walls of the modern prison persist. Not only that, despite generations of politicians stumping for “law and order,” evidence suggests deterrence doesn’t work; the commonplace justification for administering and maintaining a system of incarceration — to deter criminals — is wrongheaded at best.

Many today, echoing the abolitionist struggle of emancipation from slavery, are calling for prison abolition. That echo will reach Greenfield next Saturday when organizers from Great Falls Books Through Bars will host a benefit show: Abolition Fest at Ten Forward (aka the Root Cellar), says the venue’s programmer, Sarah Lanzillotta.

Justin Helepoloei, one of the organizers of the event, tells me that “abolition is, in the current context of prison abolition and police abolition, imagining — or working towards — a world without prisons or jails, or police. That’s how I would define it.” “There are, I think, multiple arguments for abolition,” he said. “One is that it is morally and ethically wrong to keep humans in cages. Another is that the system currently doesn’t work.”

The event will feature local artists musicians from Springfield to Brattleboro to raise money for Great Falls Books Through Bars and the Abolition Network, which operates a Massachusetts bail fund. Books through Bars, which has been active in the area for about two years, regularly sends books and letters to prisoners around the country. Not only will the event celebrate the work of the organization but it will be a place for people to plug in and learn about local activism around prison abolition.

The event came together after Lanzillotta reached out to Helepoloei suggesting they do a fundraiser. Lanzillotta says she hopes Ten Forward will “serve as a material resource for those actively fighting to dismantle oppressive structures” and that the club supports the “full destruction” of the prison system.

The event will start with a potluck, followed by performances by Doonya, a Bollywood Dance Fitness Group from Greenfield; Yellowfront, a band from Brattleboro, featuring dreamy guitar rock that sounds like sitting in a field looking at the clouds; Kobi, a jazzy guitar and drums duo that wants to take you on a “journey of sound”; Stoner Will & the Narks (aka yours truly); Domo. B, a dope hip hop artist from Springfield, laced with political undercurrents perhaps potent enough to dismantle the system; Lonetown Rattlers; and Odiosa, “Curator of zonas de liberacion using cumbia, reggeaton, y mas to cut thru white heteropatriarchal fuckshit (dance party).”

Abolition Fest will take place Saturday, May 11th, with the potluck starting at 6:30, music at 7. Suggested $5-50 donation (no one turned away for lack of funds). 10 Fiske Ave in Greenfield. All Ages.