Monte Belmonte Wines: That Time I Almost Got a Fancy Wine Word into Merriam-Webster 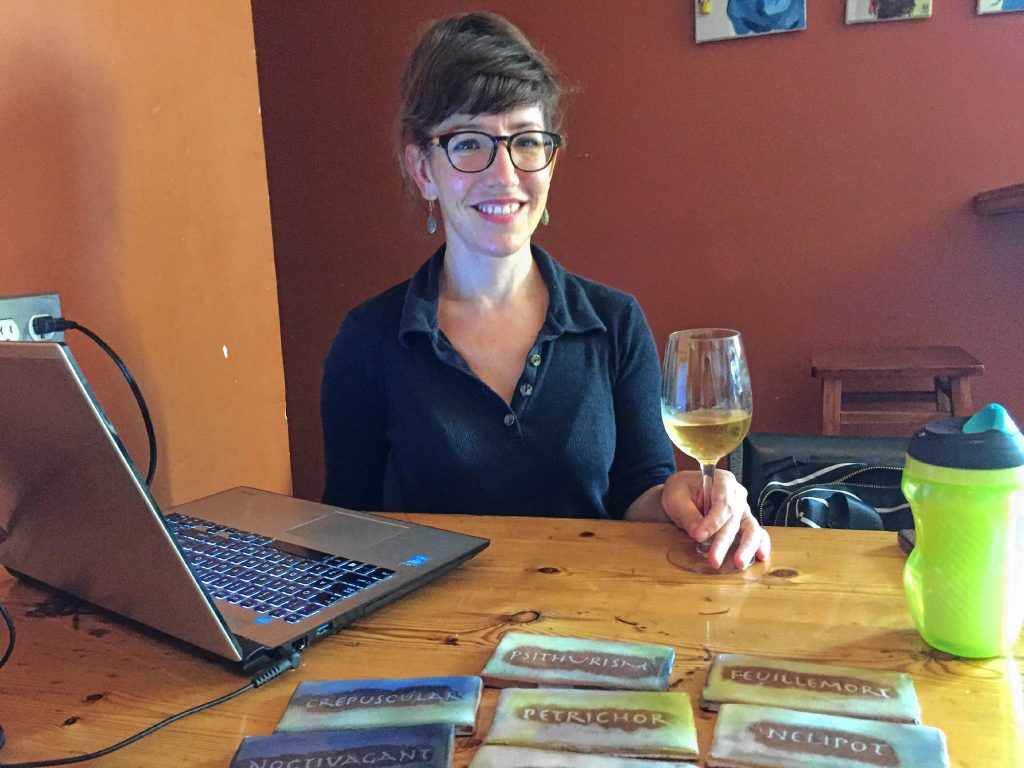 Emily Brewster at The Voo 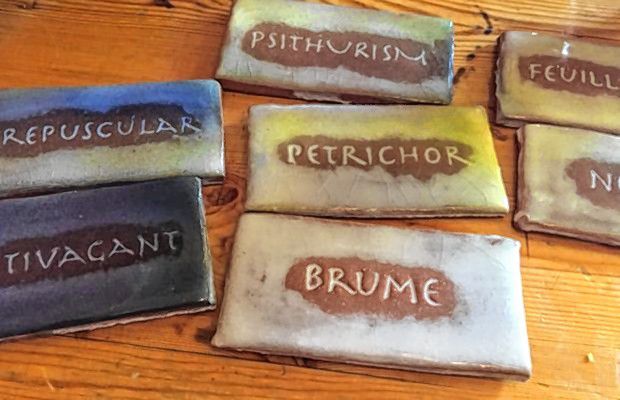 “This is super important, Monte. You can do something. Having this knowledge that you do. Knowing both the word and knowing what you know about wine. You can do something to help this word along.” So was the charge of The Word Nerd, Emily Brewster, my resident wordster from Merriam-Webster, our dictionary in Springfield. Emily is a regular Wednesday guest on my morning radio show on 93.9 The River. For YEARS I’ve been not-so-subtly lobbying the esteemed associate editor of the dictionary to get a word in, not edgewise, but into the dictionary. Any word, really. And with this wine column, I had one perfect chance. But he who hesitates is lost. 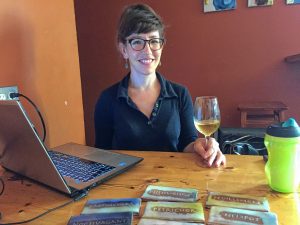 Emily Brewster at The Voo

About a year ago, two fans of the Word Nerd segment — John Ewald and Aunt Peggy O’Toole, the owners of Ewald Tileworks in Putney, Vermont — sent the Word Nerd and me a bunch of beautiful, handcrafted tiles with interesting words on one side and their definitions on the other. Words like crepuscular (relating to twilight) and feuillemort (the color of a dying leaf) and nelipot (one who walks barefoot). A gift only word nerds could love. And it was from these tiles that I first learned the word that could have led me to my dictionary destiny. The word is petrichor.

“I think you are petrichor’s best hope,” says the Word Nerd, as if she were a crouching Princess Leia sending an imploring message to Obi-Wan. I have learned over the years that the way a word is officially entered into Merriam-Webster’s dictionary is not by regularly recording radio segments while drinking wine with one of the dictionary’s editors. Emily is one of the owners of The Rendezvous in Turners Falls. And that’s where we record our segments. The way a word gets into the dictionary is by appearing in published and edited texts. The Valley Advocate is a published and edited paper for which I happen to write text. And since our word, petrichor, has a meaning that can directly relate to certain wines, petrichor seemed the best chance I had to add to the published and edited texts mentioning the word, and thus, pushing it over the edge into Merriam-Webster.

The best way to create interest in the word for Merriam-Webster’s lexicographers would be to not explicitly define petrichor but rather to just casually use it in the greater context of a column. Like, if I were to use petrichor multiple times here, without explanation, the word would receive greater consideration. For example I could write something like, “this dry German Riesling smells of mineral, slate, and petrichor.” Or I could say “the nose on this Argentinian Malbec alludes to a hot day in the summer, and the petrichor when the rain begins to fall.” Both of those examples would help to propel our petrichor into the unabridged dictionary. 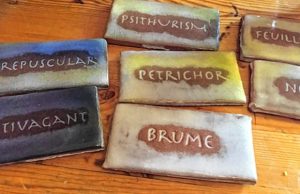 “But really, despite having this beautiful meaning, and being a word that people love, people don’t actually use the word,” says Word Nerd Emily Brewster, “For some reason English speakers prefer to use phrases to describe an odor.” But I assert that the wine world NEEDS specific words to describe specific smells. We can do better than “floral’, “sweet,” and “sour.” We have a few good ones: “oaky” (it smells like the wood it was barrelled in), “leather” (seeing as it’s not made with cow hide it becomes somewhat adjectival), “barnyard” (a wine euphemism for a poop-oriented smell, which is somehow not unappealing). But if I could use petrichor in print as a magical descriptor of the scent of a wine and if you understood it, wouldn’t all of our lives be easier?

Additionally, and not to take anything away from our beloved Valley Advocate, if an even more major publication, say the New York Times, were to write about petrichor, its chances of entering the dictionary would increase exponentially. Which is why I tagged the wine writer for The Times, Eric Asimov, when I posted the podcast of my conversation with the Word Nerd regarding petrichor. If Asimov started describing the smell of mineral rich, slate-laced wines using petrichor it would be a shoo-in for entry into Merriam-Webster. But know, dear reader, as your eyes gaze over the word in this very column, my quest has failed. I am too late. But before I explain, you should know from where the word of my quixotic quest originates.

Petrichor is not the way to describe hard-core fans of the Christian rock band, Petra. Although, it would be a good name for their fanclub. Petrichor is a portmanteau of “petra,” meaning “stone” and “ichor,” defined by Merriam-Webster as “a thin watery or blood-tinged discharge or an ethereal fluid taking the place of blood in the veins of the ancient Greek gods.” The coiners of this portmanteau are scientists Joy Bear and Richard Thomas who were part of the Australian government funded Commonwealth Scientific and Industrial Research Organisation who wrote an article in a 1964 edition of the journal Nature. The article was called “Nature of Ardulatious Odor.” In it they describe how, during dry spells, certain plants exude yellowish oils and how the soil, and clay and rocks absorb these oils. Then, when it starts to rain, the oil is released into the air creating that smell that I’m almost positive you have smelled. The smell of rain in the summertime or, in a word, petrichor.

So many delicious wines — both reds and whites-from Germany, to the Loire in France to South America — have a hint of a scent of rain in the summertime. Petrichor. It’s a smell I love. It reminds me of riding my bike around the neighborhood, barefoot, no shirt, no helmet, and no school for three months. It reminds me of being so hot and so thirsty that we drink from the garden hose. It reminds me of playing outside until the street lights come on. It reminds me of running as fast as we can to get home before the thunderstorm is right on top of us. And the fact that I can relive all of those moments in one whiff of a wine is divine. It’s petrichor.

But he who hesitates is lost. And while I was waiting until it was a little closer to summer to write about petrichor in a published and edited text, my small attempt to push this gorgeous word into the dictionary, the Word Nerd and her colleagues at Merriam-Webster officially added petrichor to their unabridged dictionary. I have done too little, too late. So now all I can advise is for you to find a dry Riesling or a sultry Loire, pour it into a glass, swirl it, stick your face in as far as it will go and breathe in. Do you smell a summer day from long before you had any business sticking your nose in a glass of wine? Do you remember the feeling of being cold on an evening after your skin burned in the hot sun? Do you remember what it felt like before you had a mortgage, before you needed a new dishwasher, before you worried if your kids would be home before the street lights come on? That is the smell of petrichor. The smell of the dry earth as the rain begins to quench its thirst. It smells like the bliss of ignorance and the carelessness of youth during a summer that never ends. And the fact that I can receive that in the scent of certain glasses of wine is, like the rain itself, a blessing from above.

Here is how Merriam-Webster officially defined one of their newest words.

petrichor: noun pe·​tri·​chor | ˈpe-trə-ˌkȯr : a distinctive, earthy, usually pleasant odor that is associated with rainfall especially when following a warm, dry period and that arises from a combination of volatile plant oils and geosmin released from the soil into the air and by ozone carried by downdrafts