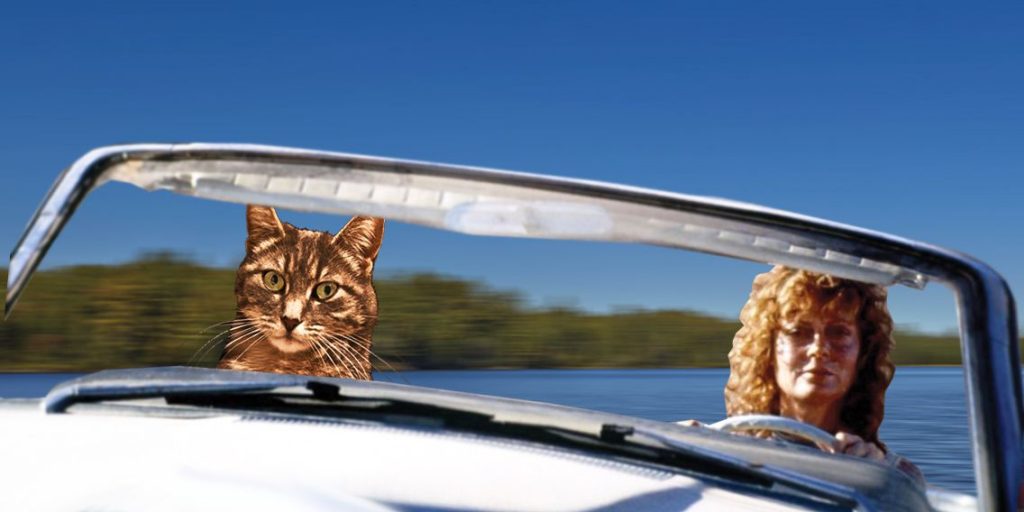 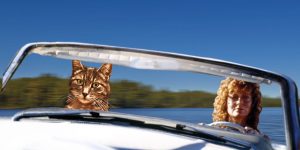 In what could easily be a scene from an action movie (starring an elderly woman and her cat), a Massachusetts woman managed to save herself and her feline companion from drowning when the car they were driving crashed into a river and sank. The woman, who is in her 60s and whom authorities described as a “spunky lady,” grabbed her pet carrier and climbed out the window before the car sank. She was treated for cuts on her hand and both she and the cat are expected to be OK. The cat, which the woman had just picked up from the groomer, one imagines will likely need to be groomed again.

A Canadian man believes he has uncovered an odd conspiracy — an unlikely alliance between his guard dog and a black bear that lives in the forest near his north Ontario home. The man posted on Twitter that his mastiff, hound, and Beagle mix has received deer bones as a gift from the bear, which then goes and rummages through the man’s garbage. According to the Twitter post, the man has not seen the exchange, but explained that he put two-and-two together when he saw his pooch with a strange bone and his garbage strewn about everywhere. Commenters on the post seemed to take the dog’s side. “This just sounds like you’re not paying him enough. If the bear is offering a better deal, you can’t blame him for taking it,” wrote one. Another commented, “If you gave him deer bones, he would bark to protect the bones from the bear. Pay your workers!”

A father and son business team in Cleveland, Ohio, have found a new niche market in the embalming and funeral directing world — preserving the tattooed skin of the dead for posterity. At the request of the family, the business (Save My Ink Forever) will surgically remove the tattoo, preserve it in a lab, then mount and frame it behind UV-protective glass, a three month process. Most of their work has been done to date on smaller tattoos, but one of their recent customers was a Canadian tattoo artist who had ink covering his whole back and arms. Said the man to his wife on his decision: “Why would I want to have all these hours of tattoo work put into my body for me to be buried with them?”

About 550 people were evacuated last week from a library at an Australian university after people thought they smelled a gas leak. The odor actually turned out to be a smelly fruit that was left in the garbage — a durian. Upon announcing the library was back open, the University of Canberra declared that “the offending fruit has now been removed.” This isn’t the first time this noxious fruit has clashed with humanity’s delicate nasal passages — food writer Richard Sterling wrote that it smells like “turpentine and onions, garnished with a gym sock,” and now-deceased foodie Anthony Bourdain memorably said that after eating one, “your breath will smell as if you’d been French-kissing your dead grandmother.” Last week’s incident mirrored a similar olfactory outrage at a different Australian institute of higher learning when in April 2018 a rotting durian cleared out a building at the Royal Melbourne Institute of Technology.

Earlier this month, a German raccoon named Fred may have set himself with free food, a place to live, and companionship for life. The large rodent managed to get himself into the Heidelberg Zoo raccoon enclosure, where he’s now one of eight. Regardless of how he got in, European Union rules forbid him from being released back into the wild. The 2015 law classifies raccoons as an invasive species that could pose a threat to European plants and animals — modern raccoons being descended from escapees from fur farms decades ago. It’s not all fun and games for Fred, however. European Union rules also say that he will have to be castrated.

In a move that would please both Michaelangelo — the ninja turtles’ “party dude” — and Napoleon Dynamite, the state of Arizona is taking nunchucks off of a list of weapons prohibited in the state. Claiming that the average person can do more damage with a baseball bat, Arizona Republican Rep. John Cavanaugh said, “They’re not dangerous to anybody.” Apparently he’s never seen Bruce Lee in “Enter the Dragon.” A Phoenix karate instructor put it another way: “I find it interesting that a state that allows you to walk around with a gun on your hip worries about nunchucks being a problem.” Arizona Democratic Rep. Athena Salman seemed to agree with the sentiment, stating that a better use of time would be to work on laws to reduce gun violence in the open-carry state. “Instead of figuring out ways that we can save lives, we’re wasting time on nunchucks,” she said.

Running with the bulls on I-495

Massachusetts State Police got an interesting assignment this week: corralling a loose bull that had found its way onto the interstate. The bull was spotted in Norton near Exit 10 on I-495 after police said it escaped from a local farm. A photo provided by a witness shows a trooper appearing to flee from the animal as it runs toward him. Police closed lanes of traffic while they chased the bull, eventually getting corralled. Brawny cattle apparently don’t take kindly to police, as officers in Missouri found last week, when another escaped bull charged into a parked cop car that was blocking its path.

The Garden State now has its own state microbe: Streptomyces griseus. For those of you unfamiliar with micro-organism history, this particular bug played a role in treating tuberculosis and was discovered in the soil of New Jersey a little over 100 years ago. Rutgers University created the antibiotic streptomycin from the microbes and subsequently the rate of tuberculosis plummeted in the United States from 194 deaths per 100,000 in 1900 to 9 per 100,000 in 1955. Good for New Jersey! — especially considering that last year their microbe news was that 17 of their beaches were invested with fecal bacteria.

Piranhas on a plane

Customs agents at Los Angeles International Airport stopped a man with 40 flesh-eating piranhas in a duffel bag and interrogated him for five hours. The man turned out to be famed chef Virgilio Martinez, and the fish were frozen for use at an LA food festival. But what we find truly horrifying is that the agents only stopped him after he had taken them on the plane and flown here from Peru. What if he had heated them up and released them into a water-flooded cabin, forcing fellow passengers to contend with the toothed creatures of the deep? Thankfully, this horror-film scenario did not occur, and the nightmare fish were used on a salad that evening. Martinez served the leftovers — dried piranha skins inside the piranha’s heads — the following night.

Have an idea for a Bizarro Brief? Email deisen@valleyadvocate.com.