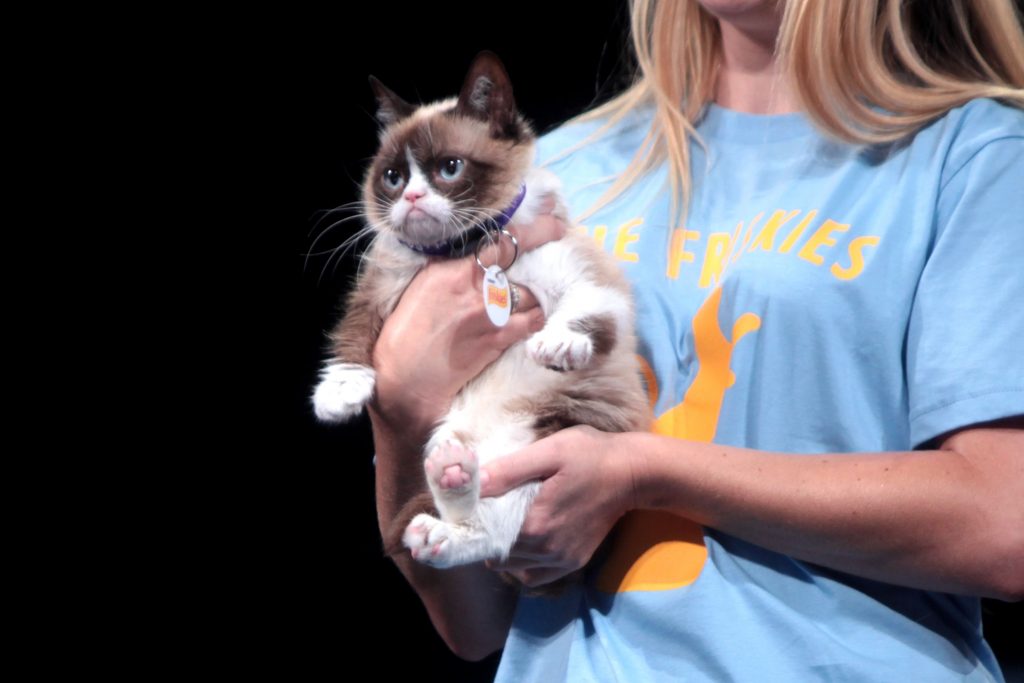 A generational meme icon is no more. At the age of seven, the beloved feline known to the internet as “Grumpy Cat” has been taken from us, but left us with her always grumpy face, which will surely delight generations of internet browsers in the years and decades to come. “We are unimaginably heartbroken to announce the loss of our beloved Grumpy Cat,” said Tabatha Bundesen, the cat’s owner. Despite top veterinarian care, Grumpy passed away of a urinary tract infection too tough for her to overcome and died peacefully on the morning of May 14 in the arms of Tabatha. RIP Grumpy Cat.

U.S. company Kraft Heinz, known for bottles of ketchup and other condiments, introduced an unholy combination of mayonnaise and ketchup mixed in the small bottle recently, which is called Mayochup. Earlier this month, it was introduced to Canadians. The name of the condiment doesn’t seem offensive, unless, of course, you speak Cree. In the native language, Mayochup can be translated to mean “shitfaced” or “shit is on my face.” But members of the Cree community in Canada are laughing about the mistranslation, including over Twitter and on the radio. Kraft Heinz has yet to respond to the translation goof.

But I was on autopilot!

Police officers in the Netherlands recently pulled over a 50-year-old man driving a Tesla car, who had fallen asleep driving down the highway and later the Dutch police agency reported the incident on Instagram. The man was spotted driving too close to the car ahead of him on the road, so police signaled the driver to pull over, but he didn’t notice. Eventually, a siren woke up the man and police pulled him over. It was then that they found that his blood alcohol level was high and he was driving under the influence. Self driving cars may be the future, but try to telling a police officer that when you could have just called an Uber driver.

A man led police deputies a very low speed chase on his tractor through Rancho Cordova in California, which unsurprisingly led to his arrest. The police received a call around 9:20 p.m. about a man driving his tractor erratically on Sunrise Boulevard and White Rock Road. The man refused to pull over and kept driving, but because this was a tractor, it was really slow. It took 20 minutes for the man to drive barely a mile during the chase, which should have been more than enough time for him to realize that continuing the chase was foolhardy at best. No one was injured and no damage was reported in connection with the chase. Alcohol remains a possible factor and the incident is still under investigation.

Look, not everyone in the good ole U.S. of A is smart, or even passes for competent when it comes to basic elementary knowledge and facts. Case in point is a recent study in which it was found that more than half of Americans believe Arabic numerals, which are the standard symbols 0-9 used across most of the world for numbers, should not be taught in schools. Fifty-six percent of people say they shouldn’t be part of curriculum in U.S. schools, which is not only flat out ignorant, but bigoted as well. Keep in mind, this survey by Civic Science, a market research company, only had 5,000 respondents, so methinks this doesn’t actually represent what the majority of the 327.2 million people living in the country actually think about Arabic numerals. But truly, who knows?

The future of fashion — science style

Nanotechnology scientists (researchers of microscopic robots) at Tufts University in Massachusetts are working on developing clothing that tells you about bad air quality or harmful gas leaks, using a simple technique. The lab at Tufts has been working on low cost and portable sensing platforms that can give average people access to data about the world around them through color-changing technology. This tech relies on dyes that change color when exposed to different gases. If you ever have a gas leak, maybe it’ll be your T-shirt warning you of danger.

Tell it to the birds

There’s a turf war going on in Teaneck, New Jersey. The culprits? A soccer team and their rival — a bird. That’s not the name of a sports team. It’s really just a bird. A local Killdeer bird has made her nest in the middle of the sport field’s turf, laying eggs there, which forced the park to close. The bird isn’t endangered, but it is protected under the “American Migratory Bird Treaty Act,” hence why the field is shut down. But fret not soccer fans (or football for you European chaps), the games are still on and have been moved to another field.

There’s a canyon in Iceland. It’s name is Fjadrárgljúfur (don’t ask us how to pronounce this Icelandic word). But the canyon is closed to visitors. The reason? Canadian pop star Justin Bieber. The pop star filmed a music video for his song “I’ll Show You” at the canyon, and now the once-pristine spot is a tourist hell hole, not dissimilar to Disneyland, New York City, and Iceland’s own Blue Lagoon. Eager fans have been trying to sweet talk rangers at the canyon into allowing them entry, with some even offering bribes.

Democratic presidential candidate Elizabeth Warren, who has offered policy plans on issues ranging from student loan debt to unaffordable housing, wants to help comedian Ashley Nicole Black with her love life. Black sent out a recent tweet, which read, “Do you think Elizabeth Warren has a plan to fix my love life?” Warren actually responded over Twitter and apparently is gung-ho to do just that. Warren responded a day later by stating, “DM me and let’s figure this out.”