Review: ‘Daydreaming’ at the Elusie Gallery 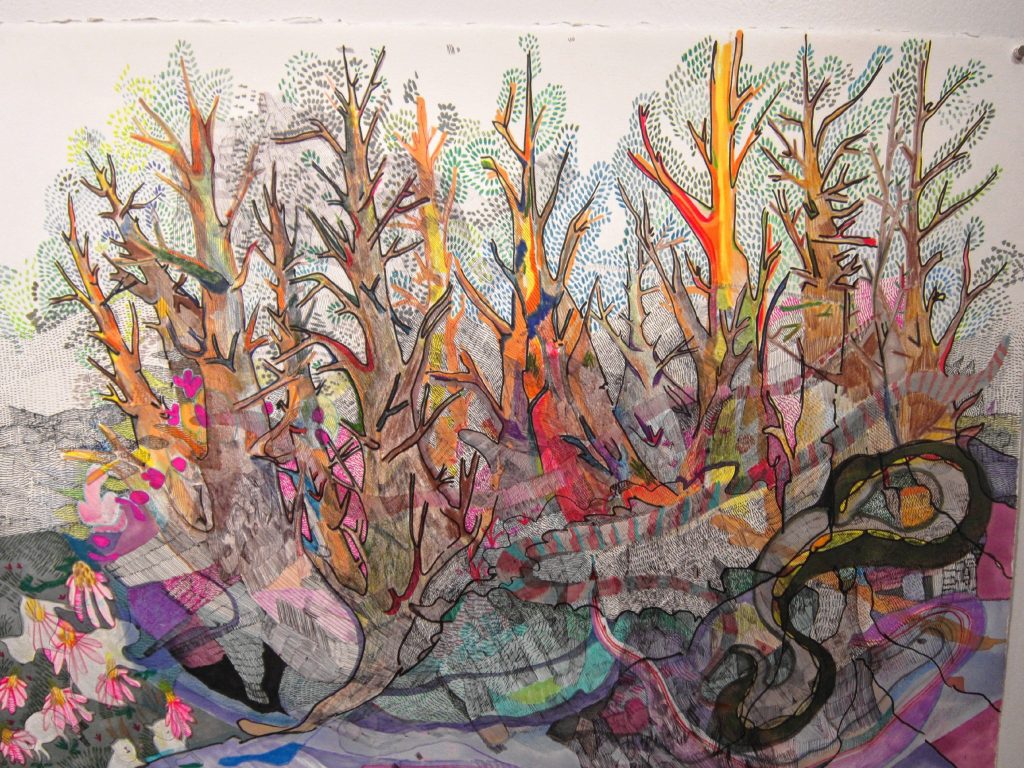 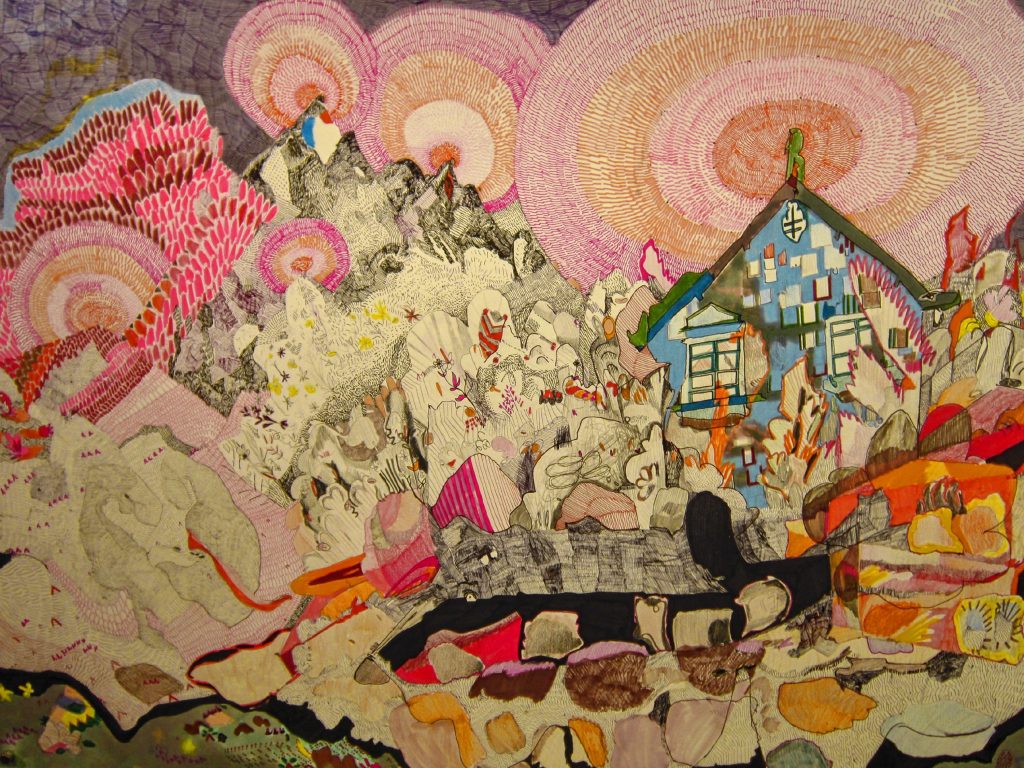 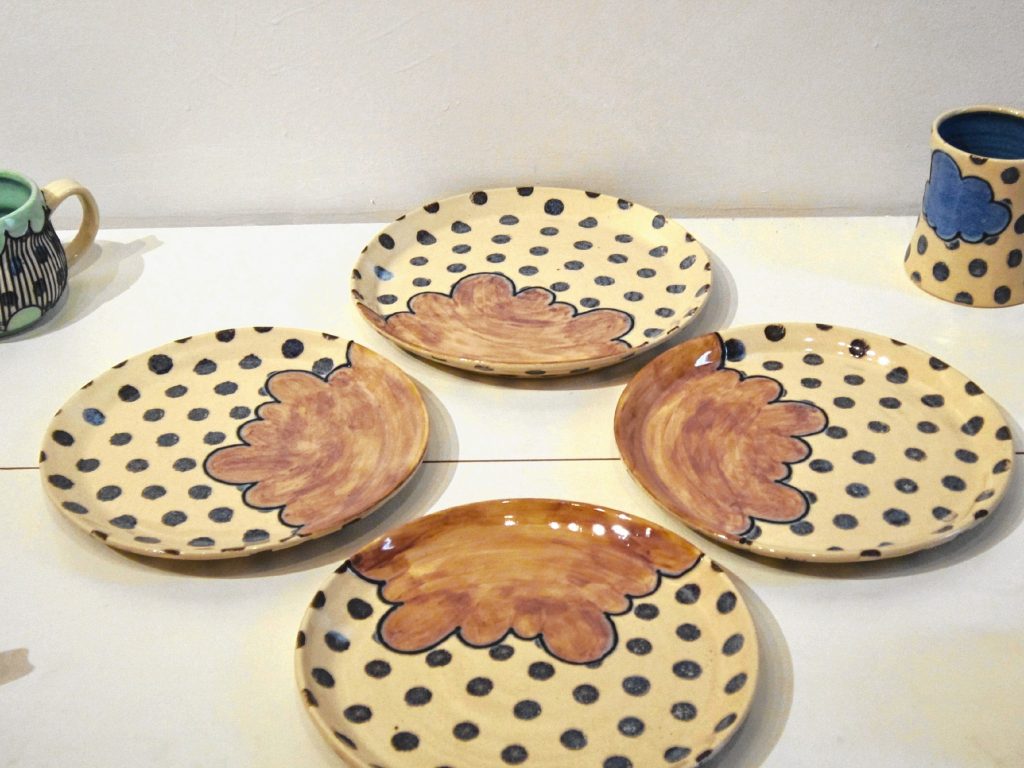 A collection of ceramic plates by artist Kayla McFarland. 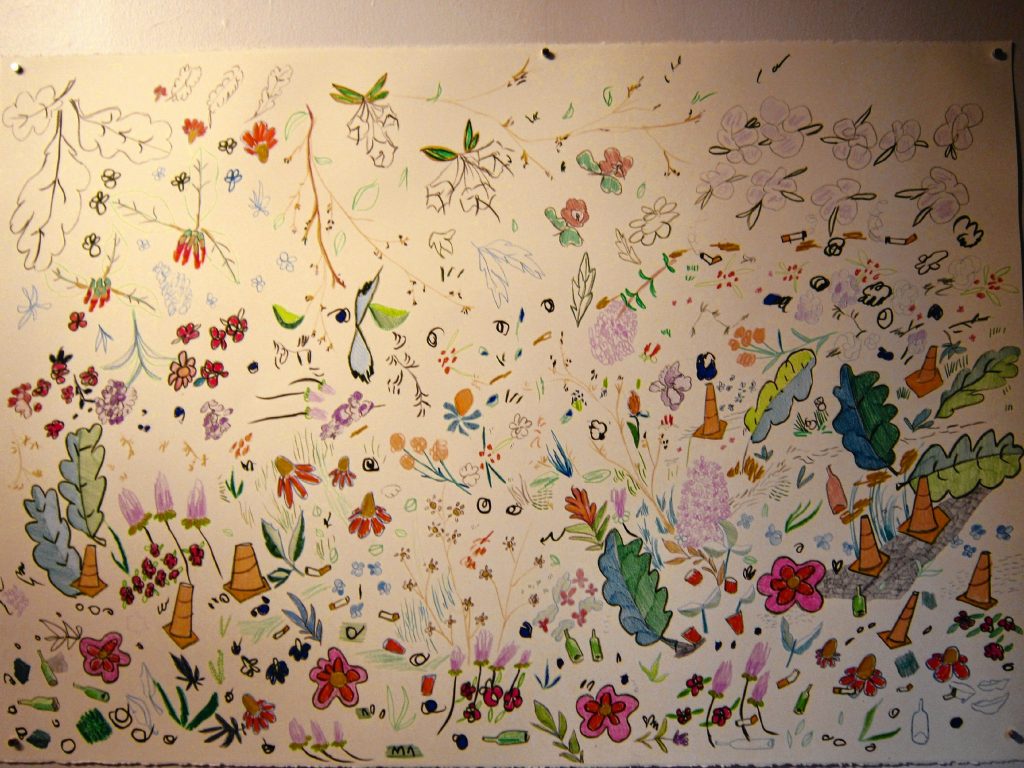 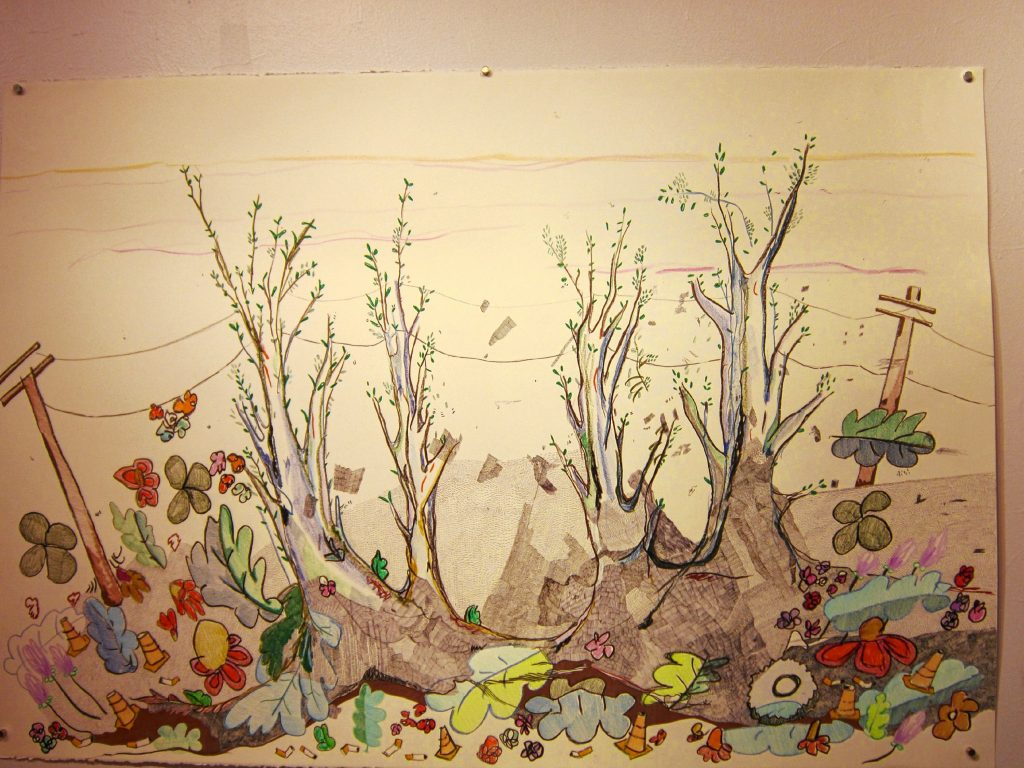 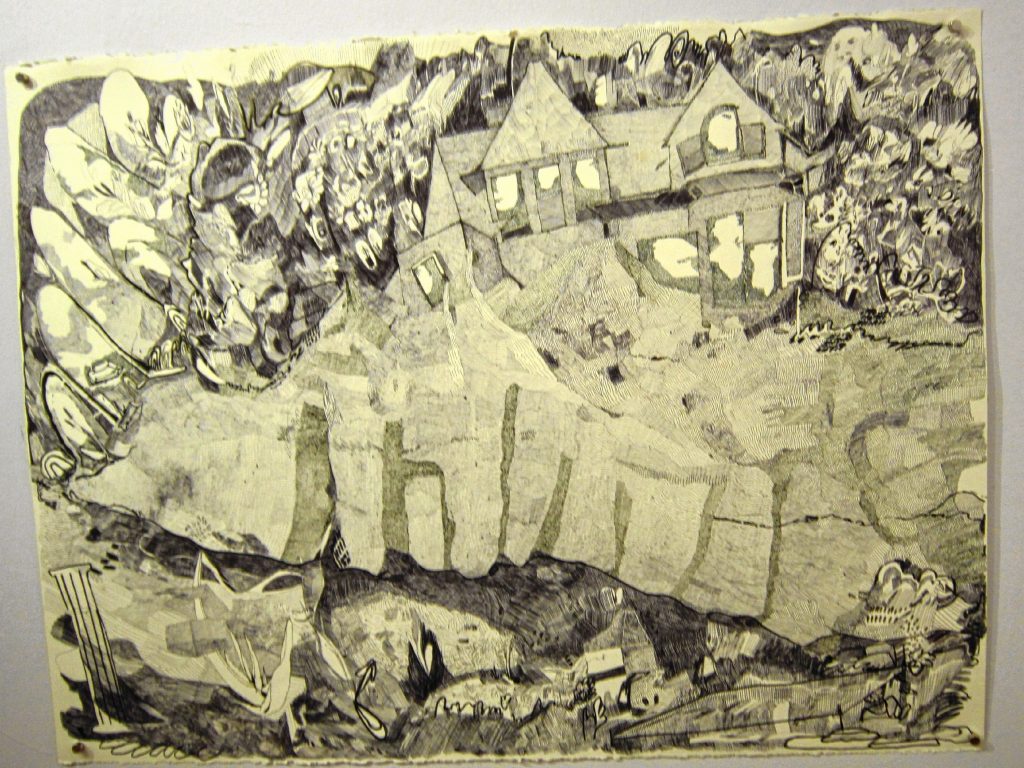 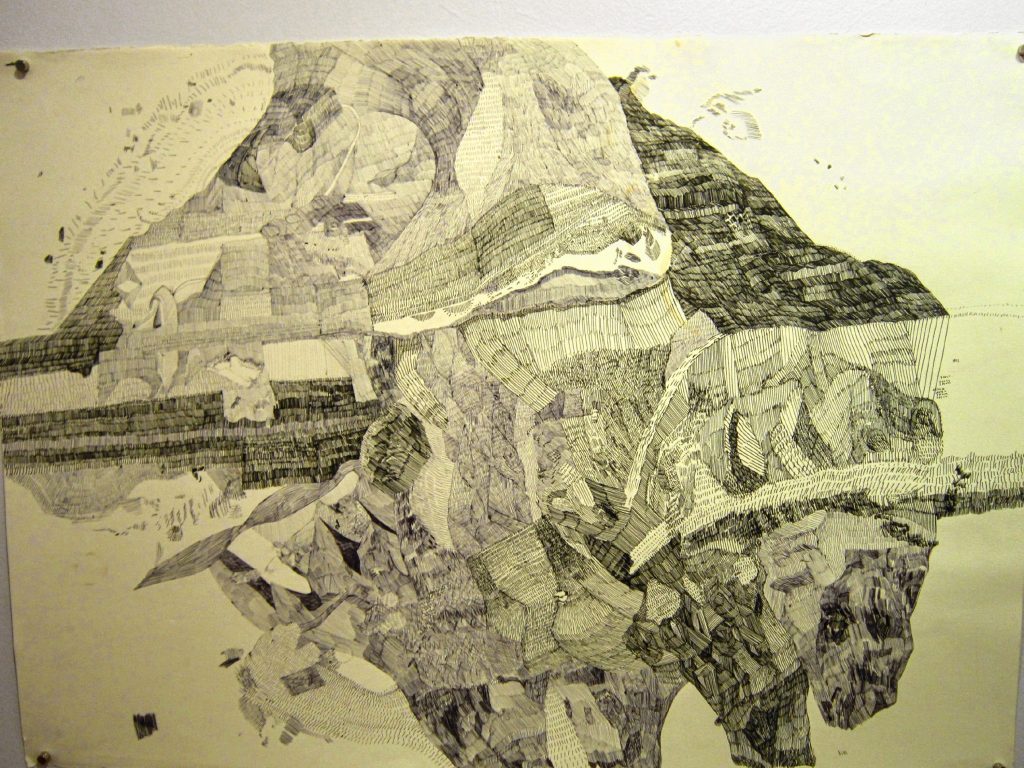 The work of two artists are on display now through June 30 at Easthampton’s Elusie Gallery in an exhibit titled “Daydreaming,” which features surrealistic illustrated pieces by Samson E. King with images of nature and everyday objects colliding in a kaleidoscope explosion and the pottery of Kayla McFarland with whimsical patterns on cups and plates that evoke the feeling of drifting into a pleasant slumber.

A gallery exhibit note regarding King states that his work “finds domestic forms, stature, and overgrown naturescapes living in monochromatic or colorful abstract realms. In this show, pieces use horror vacui to evoke repetition, ritual and routine, finding form in disorder.” 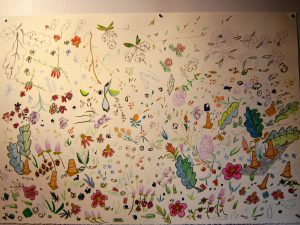 Two pieces titled “Graves” and “Psalms,” stand out with similar imagery woven throughout each piece. “Graves”  includes broken telephone lines making way for leafless columns of trees while flowers litter the ground below in a swath of colorful cartoony imagery. The scene in this piece would be apocalyptic if not for flowers seemingly growing out of the rubble of civilization. Meanwhile, “Psalms” is an abstract whirlwind of busted traffic cones and used cigarette butts swirling in an abstract sea of flowers and plants. 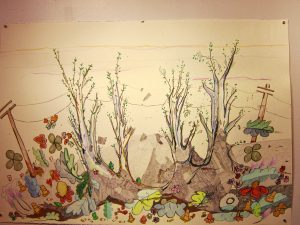 With these two pieces, the images of trash and flora seem diametrically opposed, but perhaps these two pieces are a subtle commentary about the state of the world — with mankind’s waste overtaking the natural world around us, and with “Graves,” maybe the artist is saying that our trash is bound to outlive us as a species.

Other works by King feature surrealistic and abstract depictions of humans, homes, fauna, and other objects in a chaotic multi-color assemblage. “Boy Void” features a house overtaken with bright pink and yellow colors resembling both fire and halos above the house and sky. It’s one of the more abstract pieces by King in the exhibit that is visually stunning in its madcap kaleidoscopic vision. Another, “X-Files” features more subdued darker tones, with deep lilac purple hues meshed with light yellows, hot pink flowers, and emerald greens. It’s like a forest as seen through the lens of an acid trip. 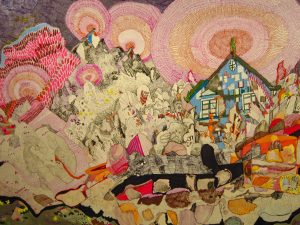 King’s use of color throughout the aforementioned works is steeped in vibrancy. These pieces look hand drawn with colored pencils, pens, crayons, markers, to make scenes burst as though steeped in a technicolor Wizard of Oz dreamscape.

By contrast, several other pieces in the exhibit are stark monochromatic abstract pieces on paper in black and white. One of the most striking pieces among them is “Gemini,” which is a series of vertical pencil lines that seems to form an abstract image of a buffalo. This piece is open to interpretation though and fits the title of the exhibit perfectly. Looking at “Gemini” is like finding patterns in clouds and thus others may walk away with a different image in their mind. 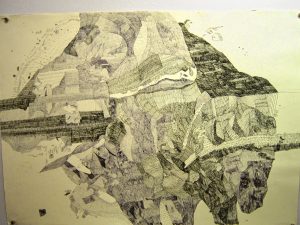 Another, “Maine Moon,” features the same art style, but with a house swarmed in abstract lines and shapes. It’s a piece that evokes a tinge of dread, as though haunted by otherworldly figures, shapes, and lines that’s beyond logical comprehension. It’s a piece that’ll likely dig into your subconscious.

Now we come to the work of McFarland, a member of Easthampton Clay, located in the Cottage Street Studios. According to a press release from the gallery, McFarland started ceramics at Holyoke Community College three years ago where she learned the basics of ceramics. Her art has evolved to focus on “creating functional wheel-thrown vessels with the use of white stoneware” and she’s inspired by creative and fun patterns with intricate designs and colors that catch the eye. Her work is meant to bring joy, while also being functional.

McFarland’s works were not tilted, but there were many unique ceramic pottery creations featured in the exhibit that paired well with the daydreaming theme of the exhibit as a whole. One of the most striking examples of her work were two pairs of ceramic plates that when viewed together create a cloud-like image dotted with blue dots interspersed among the plates. These pieces are lighthearted and seem to evoke a sense of serenity with pleasant blue skies, rolling clouds, and bright sunshine. 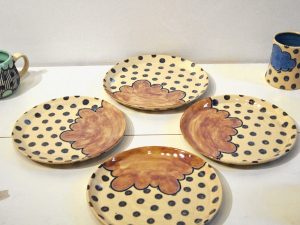 A collection of ceramic plates by artist Kayla McFarland.

Overall, “Daydreaming” is an exhibit that showcases the many aspects of dreams, whether that’s abstract pieces by King where emotional logic might prove a better lens to view the work, or the seemingly simple work of McFarland, which on closer examination includes a plethora of complexities, not only in the creation of her pottery, but with the imagery she designs as well.

For more information about “Daydreaming” and the Elusie Gallery visit  www.bigredframe.com/the-elusie-gallery.