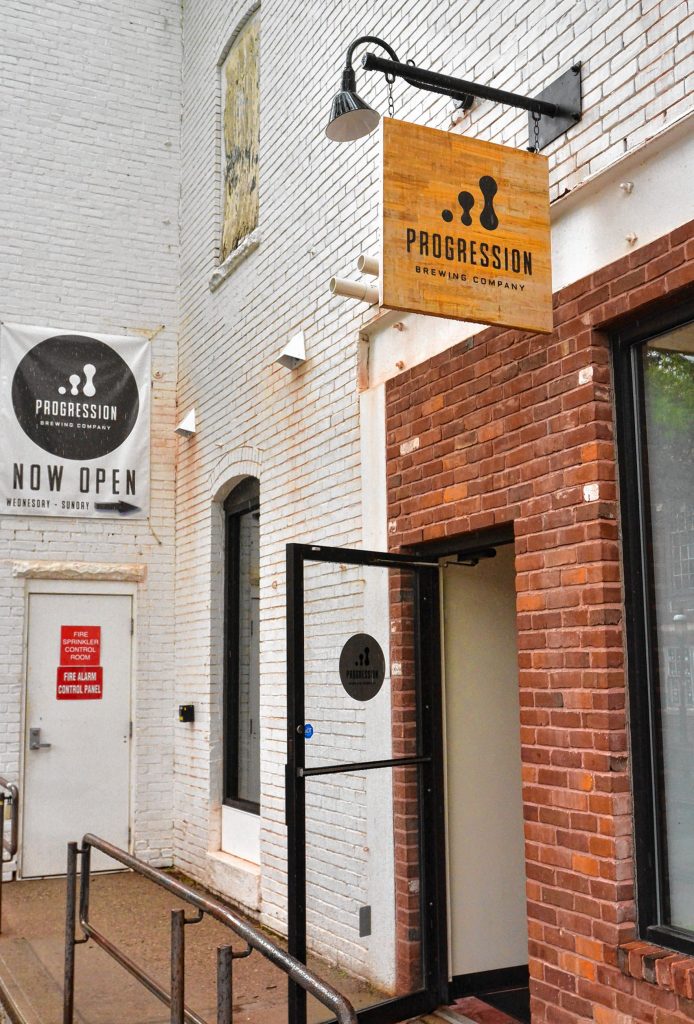 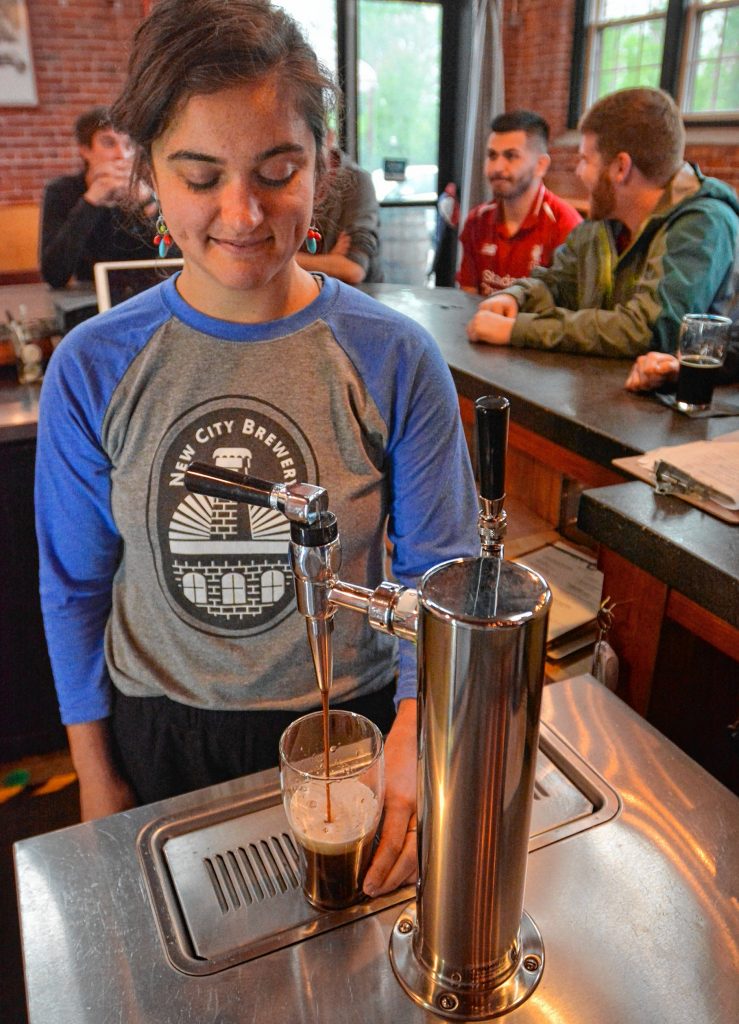 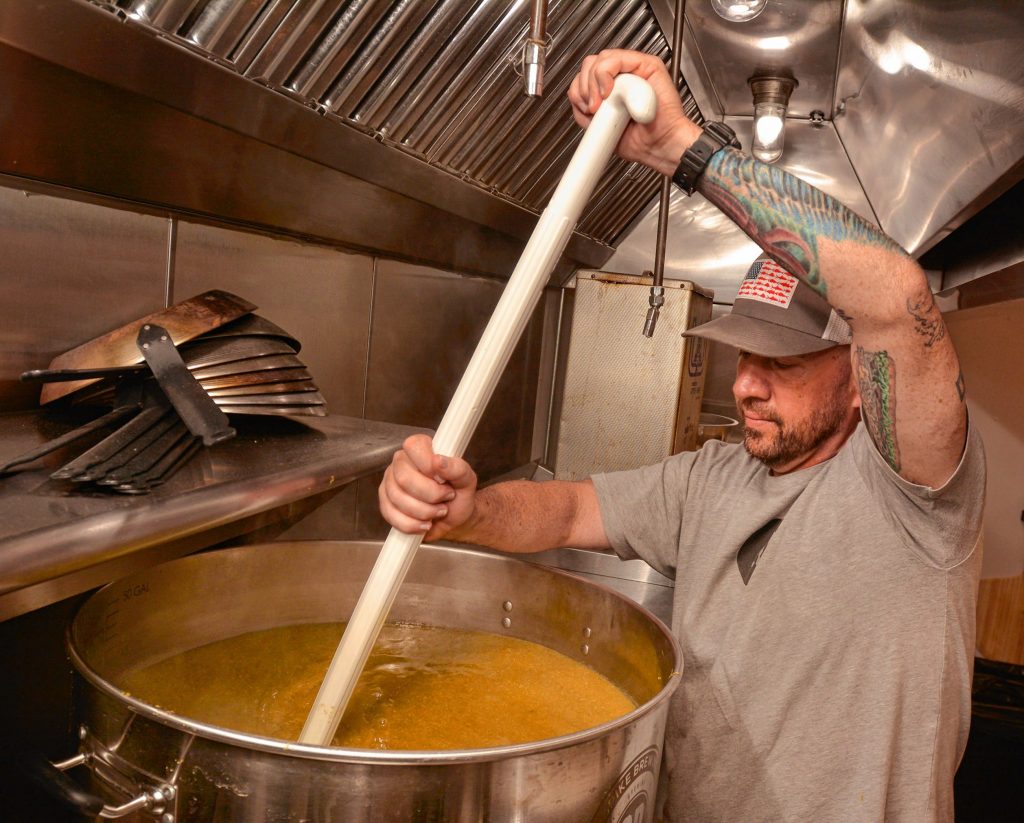 Todd Sullivan, who is the head brewer at Progression Brewing Company in Northampton, stirs an extra pale ale made with hops from Four Star Farms in Northfield, Tuesday, May 28, 2019. The new beer is being made in small quantity for sampling. 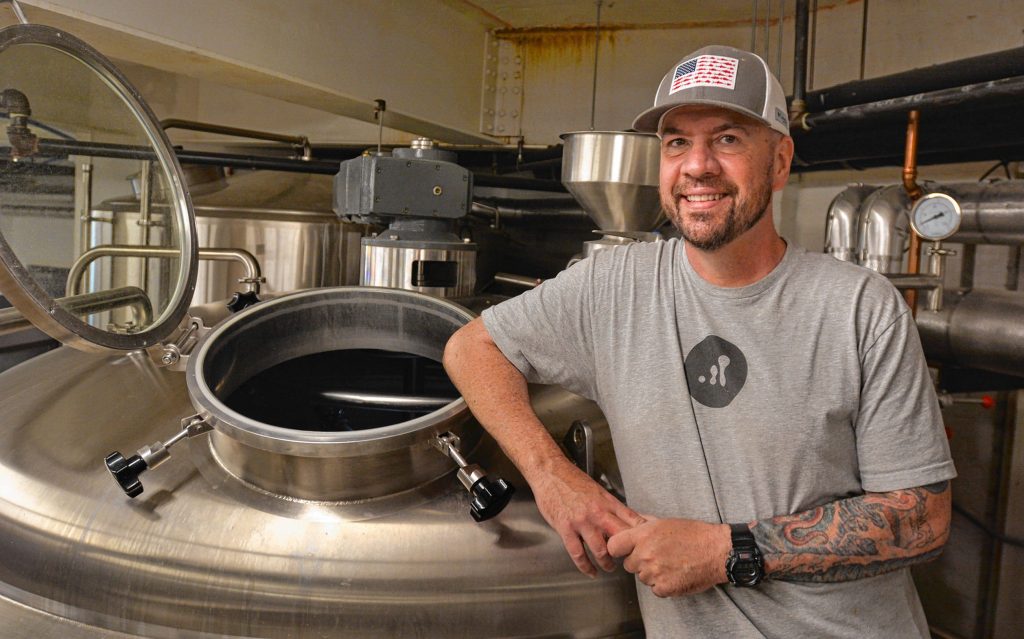 Todd Sullivan, who is the head brewer at Progression Brewing Company in Northampton, in the brewing room, Tuesday, May 28, 2019. 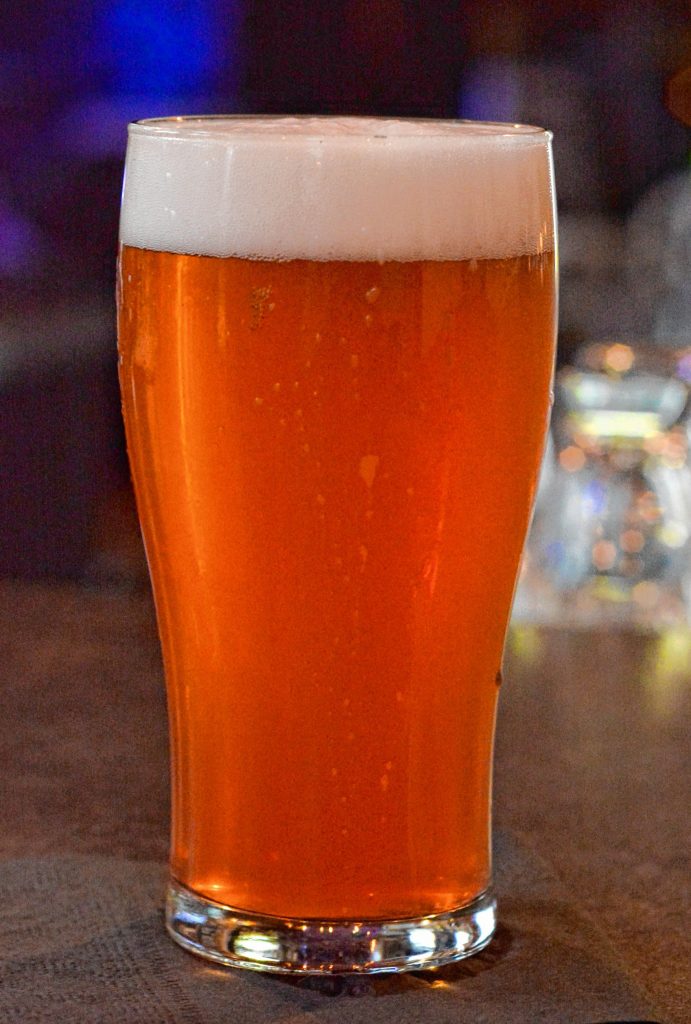 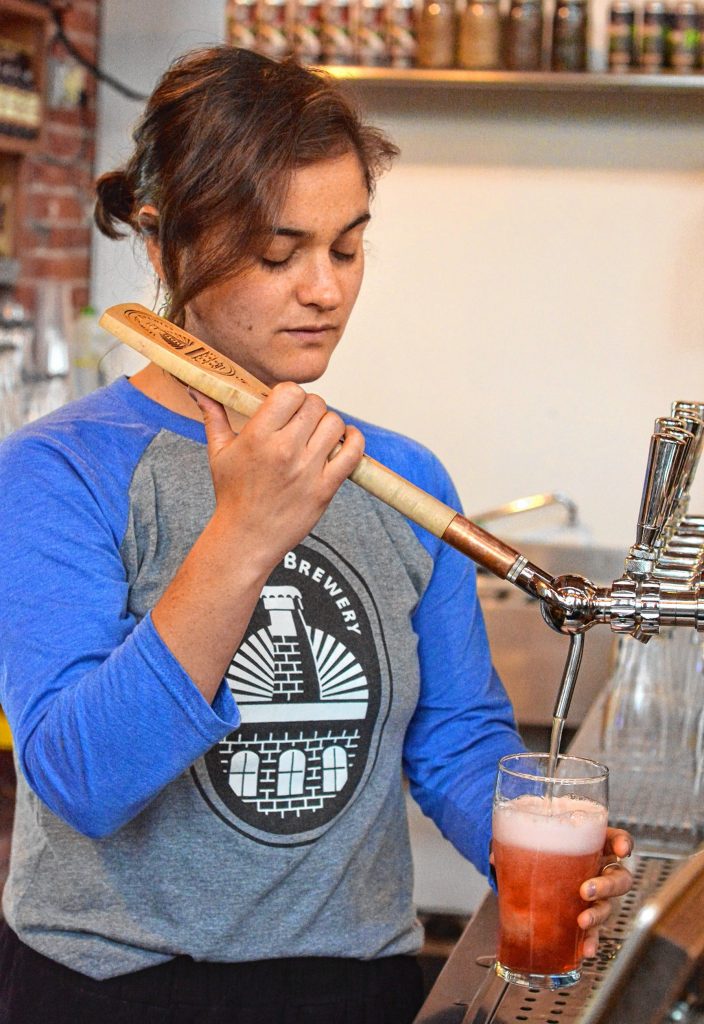 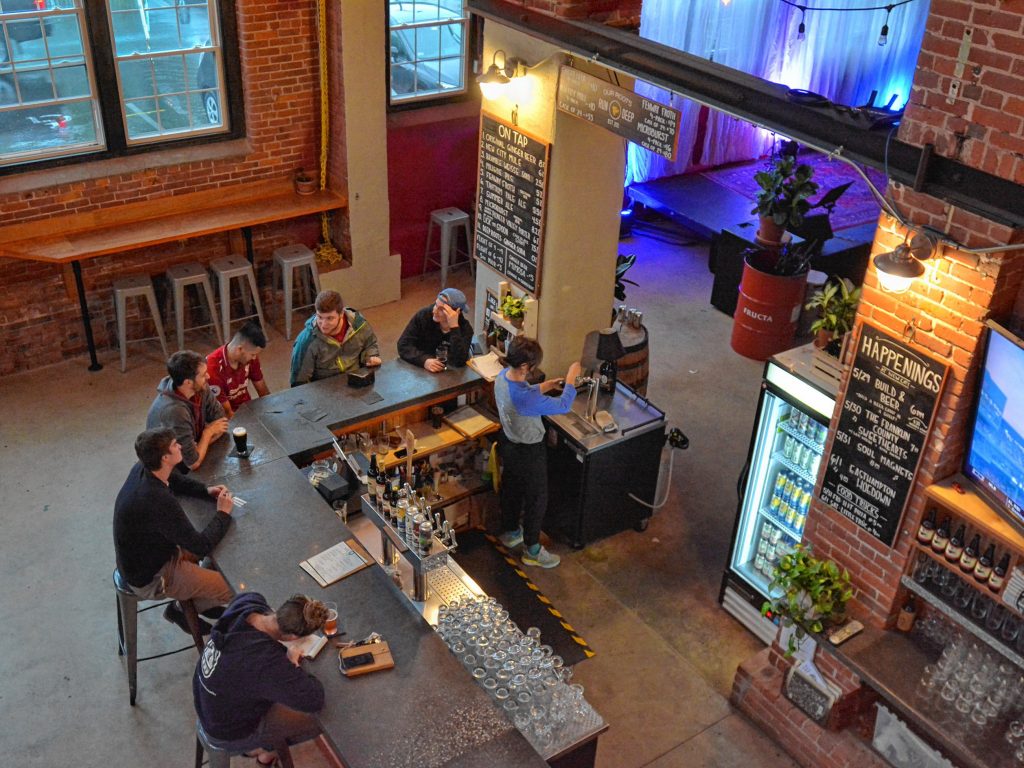 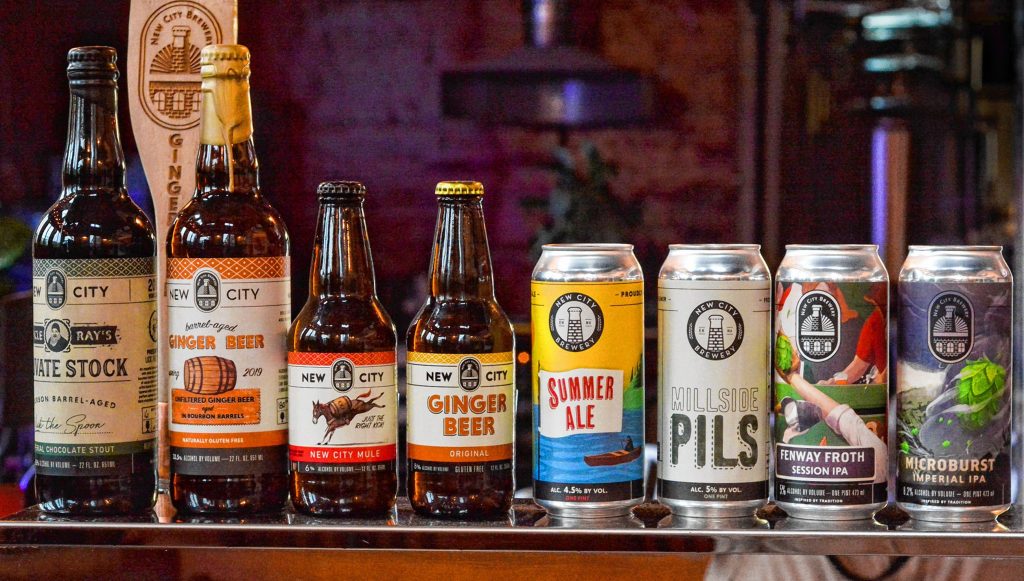 Beers available in bottles and cans at New City Brewery in Easthampton, Tuesday, May 28, 2019. 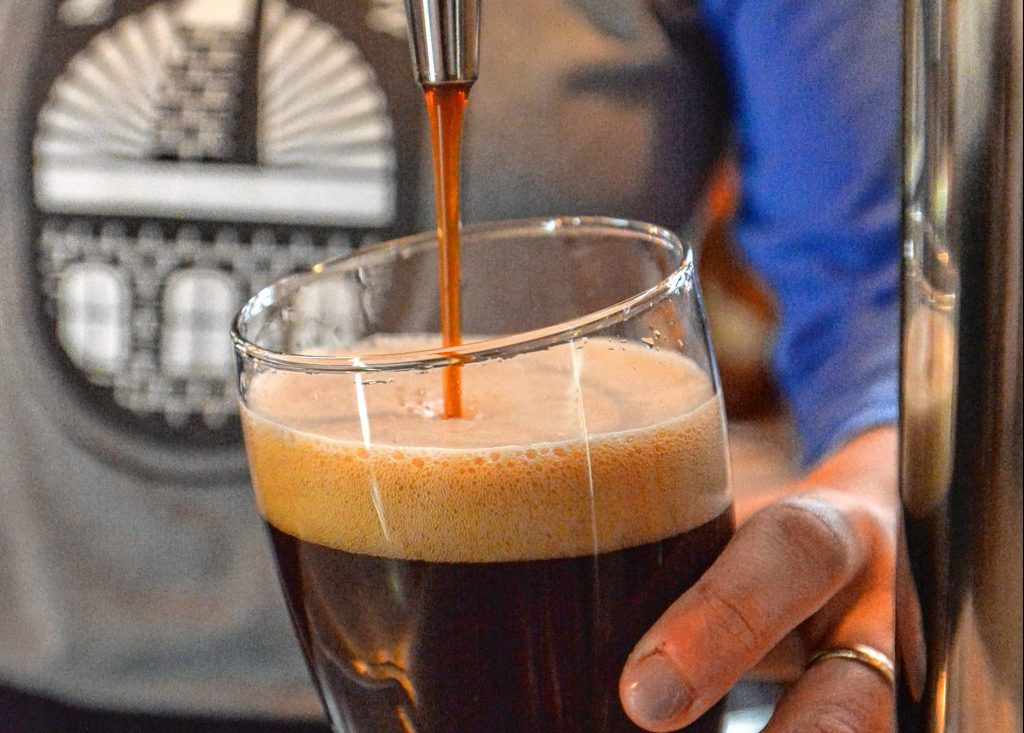 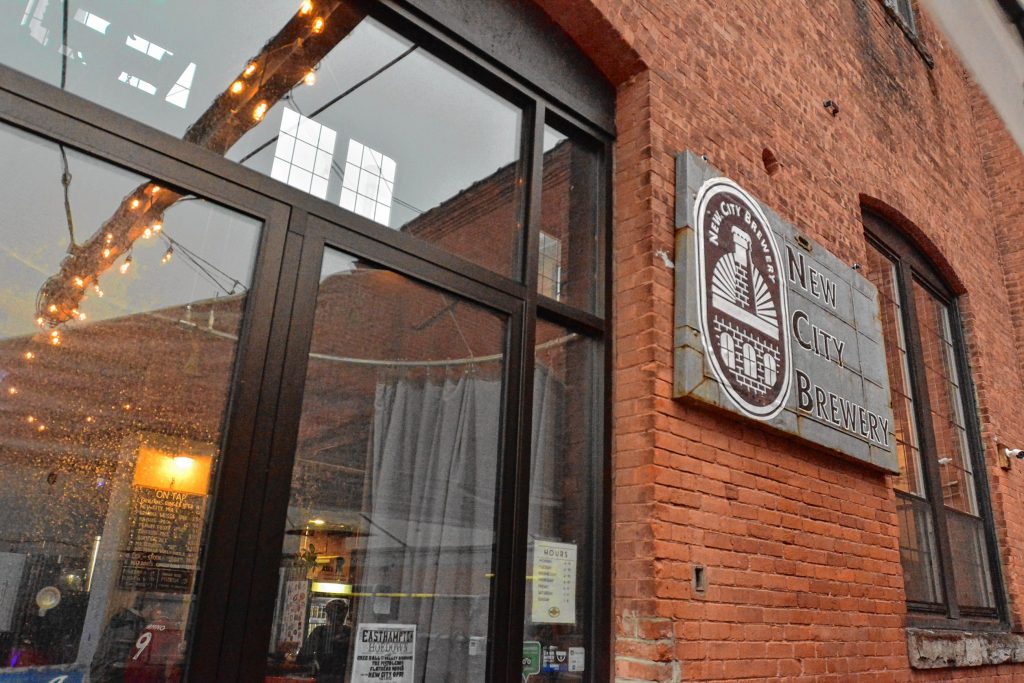 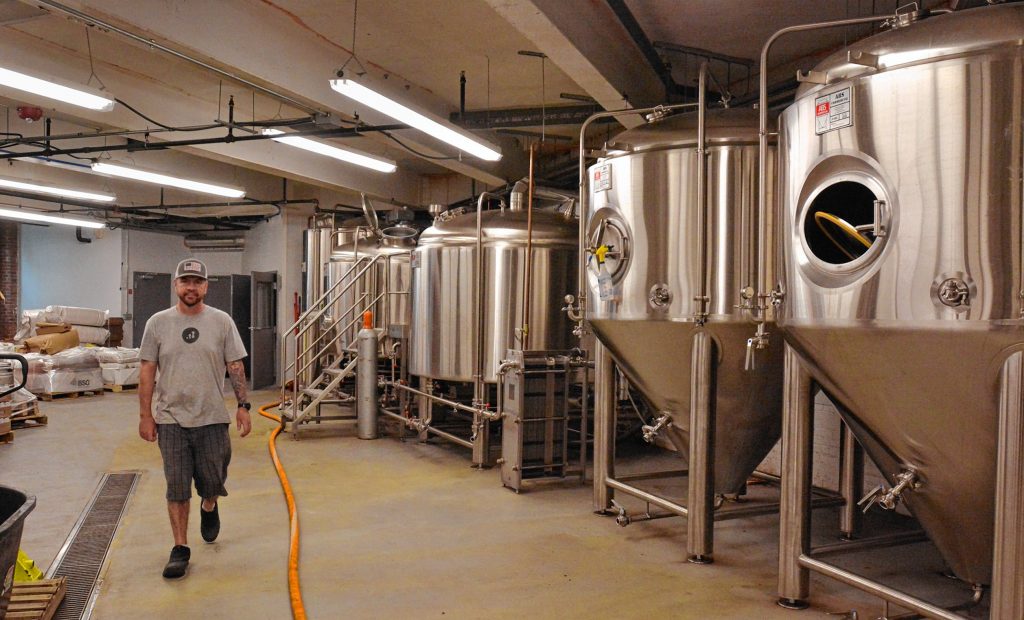 Todd Sullivan, who is the head brewer at Progression Brewing Company in Northampton, in the brewing room, Tuesday, May 28, 2019.

In the Advocate’s monthly craft beer column The Beerhunter, I keep my finger on the pulse of local craft beer business. The column began in 2014. From day one, I had plenty of little dramas and lucky breaks to cover, from small-business zoning woes to creative partnerships with local farms and restaurants. 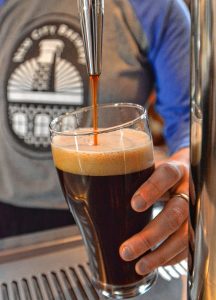 But right around 2016 — the year of the first Western Mass Beer Week — something happened. The pulse of our beer scene began to quicken. In the four years since, a dozen breweries have opened their doors in Western Mass. More draft lines are pouring locally-made liquid. More restaurants are hosting beer pairings and tap takeovers to showcase beer made down the street.

More farms are selling ingredients to breweries, and getting spent grain in return, which they use as feed for livestock. Taprooms have become a central home for many local bands seeking small live venues. And anecdotally, I have seen more visitors coming to the Western Mass region specifically to string together brewery visits into day trips and weekend getaways.

The system is pumping local dollars and good vibes. The craft beer heart beats strong now, like a body that is finally getting enough exercise.

That’s the whole point of Western Mass Beer Week, says Jordana Starr. “We want to show that this is a destination for beer. The cohesiveness of the beer community encourages people to come visit. The Valley is only so big, but we’re seeing more and more cooperation and collaboration each year.”

Starr is the new co-chair of the Beer Week committee, along with Mike Schilling (the couple also runs the homebrew shop Beerology in Northampton). The other committee members are brewer Rachel Rosenbloom from Fort Hill in Easthampton, Andrea Stanley from Valley Malt in Hadley, Orion Howard from Bright Ideas Brewing in North Adams, and Kyle Anderson from The Dirty Truth in Northampton. 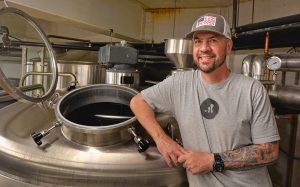 Todd Sullivan, who is the head brewer at Progression Brewing Company in Northampton, in the brewing room, Tuesday, May 28, 2019. Jerrey Roberts photo

Starr and Schilling have been involved since the beginning, and Starr thinks that brewers’ awareness that Beer Week will return each year has led to a deeper integration of local talent.

“We’re seeing not just more events each year, but more people at each event,” she says. “Sometimes at a beer dinner, you can get to know five or six brewers in one spot. I see that as a measure of success.”

“And a lot of participants know what they’re doing at this point,” she adds. “Beer Week now does a lot of its own work. We set up the backbone, and because people are familiar with it, they say ‘no problem,’ and they jump in. Some places have been planning this since last year.”

Certain collaborations continue beyond Beer Week. This past spring, Abandoned Building Brewery in Easthampton teamed up with Amherst Brewing on a beer called Hazeopotomus, which became so popular that they were still making and releasing it through the fall and winter. 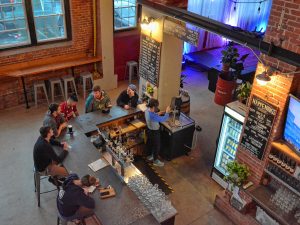 For brewers new to the scene, Beer Week can make it easier to connect, says Schilling. “It clears a lot of schedules,” he says. “When brewers set aside the week in advance, there’s less of a feeling of cold-calling each other to collaborate.”

Matt Tarlecki, who runs Abandoned Building Brewery, told me he thinks of Beer Week “like a petri dish of experimentation for beer entrepreneurs.” That’s why he’s collaborating with Vanished Valley Brewing in Ludlow on a milkshake IPA that uses grapefruit and guava fruit puree — “a new combination for us.”

Brewer Tyler Guilmette, who runs Brewmaster Jack in Northampton, says he is “psyched” to collaborate with Shire Breu-Hous in Dalton on a new double IPA. “Beer Week is a great time of year,” he says. “I definitely have a habit of focusing too much on what’s in front of me at the brewery, and not carving out time to just hang out and catch up with friends in the Western Mass beer scene. Beer Week is a great excuse to break that cycle.” 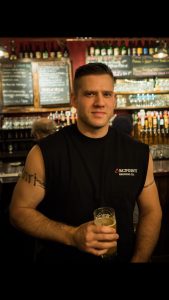 Chris Peterson, the head of Arcpoint, at the Foundry in Northampton. Courtesy photo

CJ Eldridge, one of the founders of Arcpoint Brewing Company, says Beer Week has been instrumental to the new brewery’s journey. Arcpoint formed in 2017, and hopes to open its building and taproom in Belchertown toward the end of this year.

“Through Western Mass Beer Week, we’ve made so many lasting friendships in the local beer industry that have played a vital part in helping Arcpoint become more of a household name here,” Eldridge says. Arcpoint will be involved with the Worthy Craft Beer Showcase on the final day of Beer Week, he says, and “we couldn’t be more proud to take part.”

Brewer Caleb Hiliadis at Amherst Brewing says Beer Week has been “one of the single most important things for our brewery” when creating a sense of community. “It brought new friends through our doors for the first time that first year, and we have now built relationships with too many to count,” he says. Tanzania Cannon-Eckerle, who runs Brew Practitioners in Florence, feels similarly: “For the breweries, it is a holiday. As the holidays roll around, you all get together, toast a beer, and share tales of the year past. It is a ‘Beer-mas’ for brew staff!”

It’s not just breweries and bars that jump on board. The annual Connecticut River boat cruise hosted by Valley Malt, Hadley’s local malthouse, has become a popular Beer Week event. Owner Andrea Stanley works with Western Mass farms to grow barley, wheat, rye, and corn. “To malt and then sell this grain to a local brewery and have it enjoyed by people in our community is a radical thing,” Stanley says. “Most beer ingredients come from thousands of miles away where the farmer is rarely celebrated. We are lucky to live in a place where we can highlight and celebrate local farmers and support them and their family farms in a pint of delicious beer.” 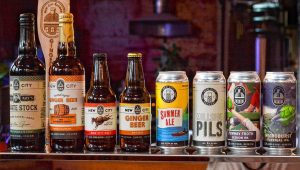 In North Adams, Bright Ideas Brewing co-founder Orion Howard says brewer Danny Sump is collaborating with Building 8 Brewing in Northampton on a hazy New England IPA. “We have not distributed much beer in the Pioneer Valley, although we just started to do so with our cans,” Howard says. “This gets our name out there … it reminds people that Western Mass extends all the way over to the Route 7 corridor.”

We’ll see what the local craft beer landscape looks like in another four years. But as usual, the work gets done one week at a time. Newcomer Zachary Livingston, who opened Floodwater Brewing in Shelburne Falls a few months ago, says he plans to relax, have fun, and enjoy what’s out there. “When you open a brewery, you make a rewarding decision that comes with a lot of sacrifice,” Livingston says. “To me, Beer Week is a celebration of the local breweries that work hard to serve the community and beyond.”

A TASTE OF THE BEER WEEK CALENDAR

Here are just some of the events we’re looking forward to between June 8 and 15. Visit westernmassbeerweek.org for continued announcements of additional events.

Friday, June 7 (and all week long)

WMABW Scavenger Hunt: Stop by Beerology in Northampton to sign up for a scavenger hunt to uncover amazing beer and delightful locales throughout Western Mass. The hunt runs from Saturday, June 2, to Sunday, June 16. Sign-up for teams of up to four people begin Friday, June 7. Completed materials due back to the shop by Tuesday, June 18. The winning team gets an awesome prize package. Entry fee of $20 per team due at sign-up. Beerology, 342 Pleasant St, Northampton. 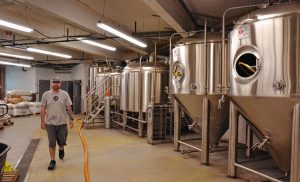 Todd Sullivan, who is the head brewer at Progression Brewing Company in Northampton, in the brewing room, Tuesday, May 28, 2019. Jerrey Roberts photo

Pints in the Park: Third-annual celebration with live music, tasty food, and lots of local brews and food from The People’s Pint and Bart’s Ice Cream, plus kombucha and Ginger Libation from Artisan Beverage Cooperative. With musical acts Moxie, Ali Kat and the Revelators, Hevvi Synthia, The Buddy McEarns Band, and Squash Blossom. Tickets are $10 in advance. Saturday, June 8, from noon to 6 p.m. Greenfield Energy Park, 50 Miles Street, Greenfield.

Fresh Paint Block Party: Celebrate the installation of over 20,000 square feet of breathtaking mural art across downtown Springfield. Live painting, DJ music, tours of the finished murals, opportunities to meet the artists, food trucks, and a chance to join the paint party. Feel and open to all ages. Hosted in partnership with White Lion Brewing Company. 227 Bridge Street, Springfield. Saturday, June 8, from 1 p.m. to 6 p.m. 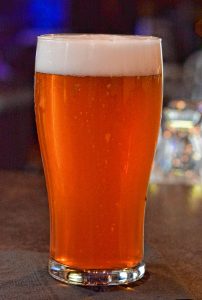 Bear and Bramble Outdoor Cask Tapping: Florence nanobrewery Bear and Bramble will tap an exclusive craft beer on the covered deck at Bistro 63 in Amherst. This year’s flagship brew is thee Bombus Impatiens Saison, which has never been casked before. Sunday, June 9, from 6 p.m. to 9 p.m. Bistro 63, 63 N. Pleasant Street, Amherst. 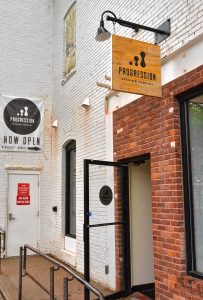 Lefty’s Send-Off: After nearly a decade of business, Lefty’s Brewing closed its doors in April. Wish the whole Lefty’s crew adieu and good luck on their next endeavors at a special party hosted by The Wheelhouse at Hawks and Reeds Performing Arts Center in Greenfield. Free entry. Thursday, June 13, from 5 p.m. to 11 p.m. Hawks & Reed, 289 Main Street, Greenfield.

Jessica Release: Per its Beer Week tradition, Amherst Brewing will release this year’s Jessica IPA, brewed once annually. The 2019 recipe uses a denser grain bill and way more hops, clocking in at 8.5-percent ABV. Cans and drafts will be available at the brewery, and draft will be available at all Hangar Pub and Grill locations. Beginning Friday, June 14, at 11:30 a.m. Hangar Pub and Grill, 10 University Drive, Amherst.