Cinemadope: Combat Obscura, a marine’s film, offers a peek behind the curtain of war 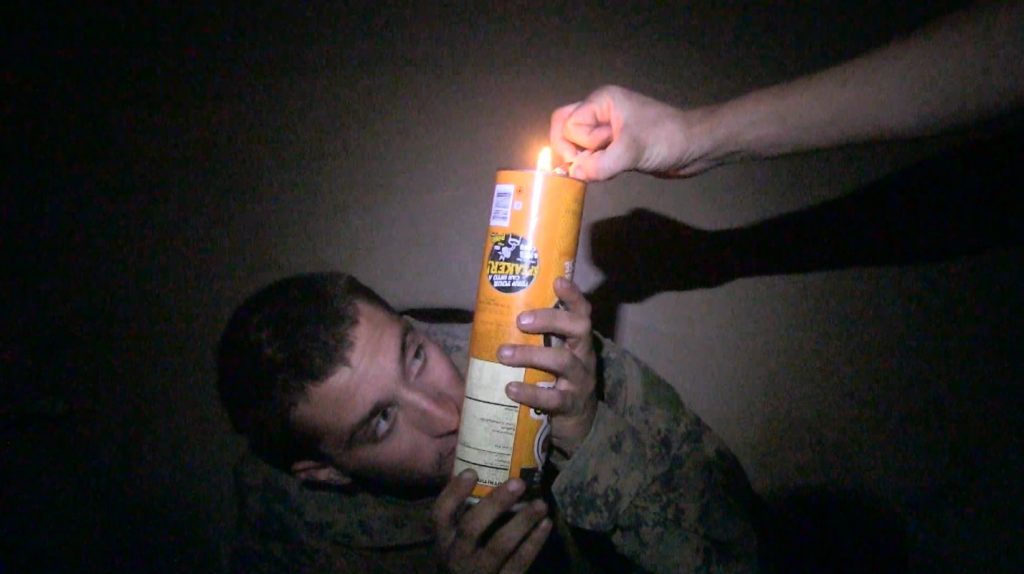 It shouldn’t come as a shock to anyone that the military mights of the world have long been concerned with what we’ve come to call “optics” — the way in which a given political action is perceived by a public that is surrounded on all sides by an endless media saturation. It can be a delicate dance, and those pulling the strings sometimes fall flat on their face — witness the recent embarrassment in Japan, where White House staff tried to hide the USS John McCain (a 505 foot ship) from the President’s view. Certainly, a peek behind the curtain can be a startling if strangely refreshing thing, revealing deeper-running interests and issues.

But a glimpse at one man’s pettiness and insecurity is one thing; it is another to have a window onto war. For the majority of us, war is what we are told it is — whether by the news teams that report on it, the military men that plan it out, or those whom we know that have fought it and were lucky enough to come home. It is a rare thing, even in our streaming-everything era, to have a first-hand account recorded as it all happens.

This week, Amherst Cinema offers just that when it brings in the 2019 documentary Combat Obscura. Director Miles Lagoze was 18 and fresh out of high school when he enlisted in the Marine Corps. A movie buff, he was sent to Afghanistan to serve as Combat Camera; as the official videographer for his unit, his job was to capture and edit footage that would later serve as media for the Corps’ recruiting efforts and archives.

As one might guess, the Marines wanted to cast their efforts in a certain light that Lagoze — who along with veteran Chris Jones will be at the screening — calls a “wholesome and sanitized manner… I couldn’t show anyone cursing or smoking cigarettes during a firefight, and casualties were often forbidden from being exposed.” If they didn’t want civilians to see a Marine smoking, it’s a good bet they didn’t want people watching a film that opens as an airstrike demolishes the wrong building. “Holy shit,” says a watching Marine. “That’s the wrong building. Holy shit! Yeah, boy!”

Lagoze, who says he “came from a liberal background but decided to enlist in the Marines when I was 18 as a Combat Cameraman for reasons I still don’t fully understand,” held on to all his unreleased footage when he was discharged, partly as a way of processing his own overseas experience. And while he acknowledges that no one film can capture all the aspects of war, he hopes that his — in its rawness and unusually high level of access — will inspire a fresh dialogue about the subject that is less rooted in the politics and more in people. In today’s hyper-partisan political climate, that may sound like an impossibly tall order, but the alternative is much worse.

Down the road at the Yiddish Book Center in Amherst, Robert J. Labay’s 2012 short Evan Kaufmann: Father’s Land brings us back to another conflict and the lasting scars wars can leave not only on those who fought them, and the innocents caught in the crosshairs, but also on the descendants of those who suffered. Kaufmann is a Jewish American and former University of Minnesota hockey star who is given the chance to pursue a professional hockey career. The catch: the offer is from Germany, where many of his family were murdered during the Holocaust. The emotional turmoil of that devastating history, and the modern question of whether to engage with a new Germany or not, is the heart of Kaufmann’s tale.

On a somewhat lighter note, the short is paired with Beating the Odds: The Al Rosen Story, a look at the unlikely history of the asthmatic kid who grew up to become one of baseball’s great sluggers (and, after retiring due to injuries, front office managers).