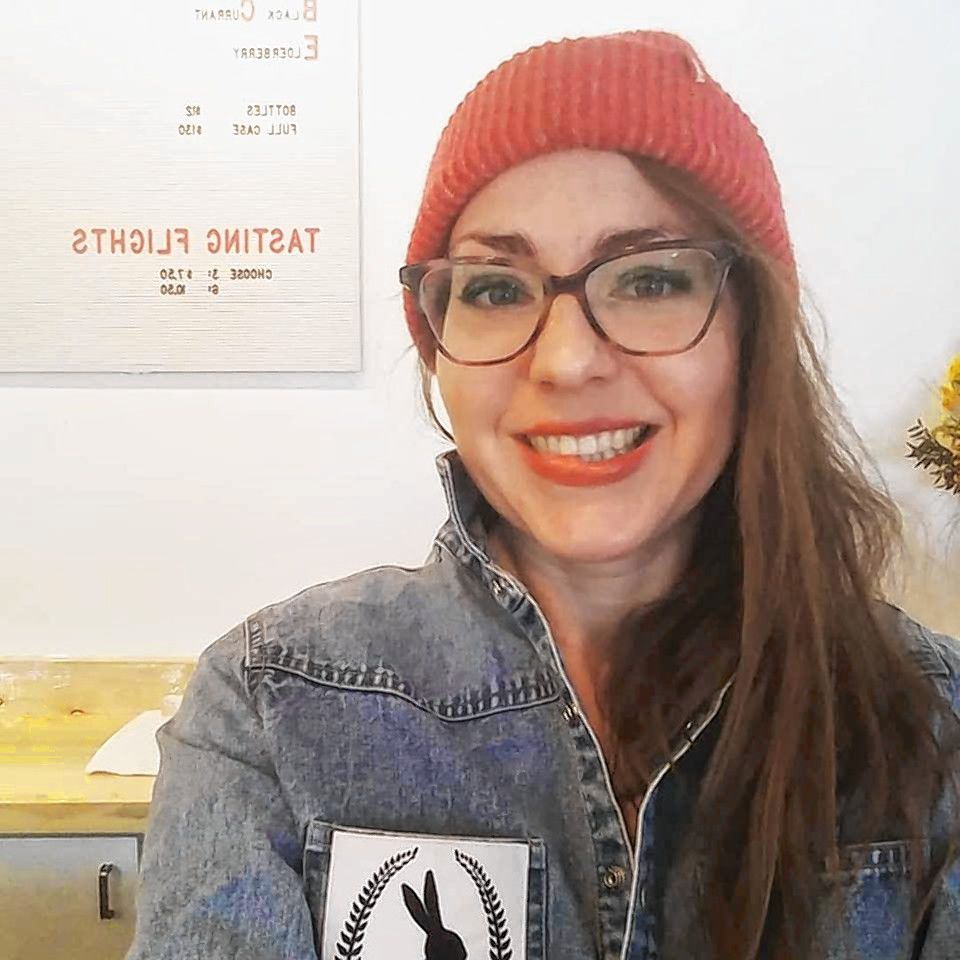 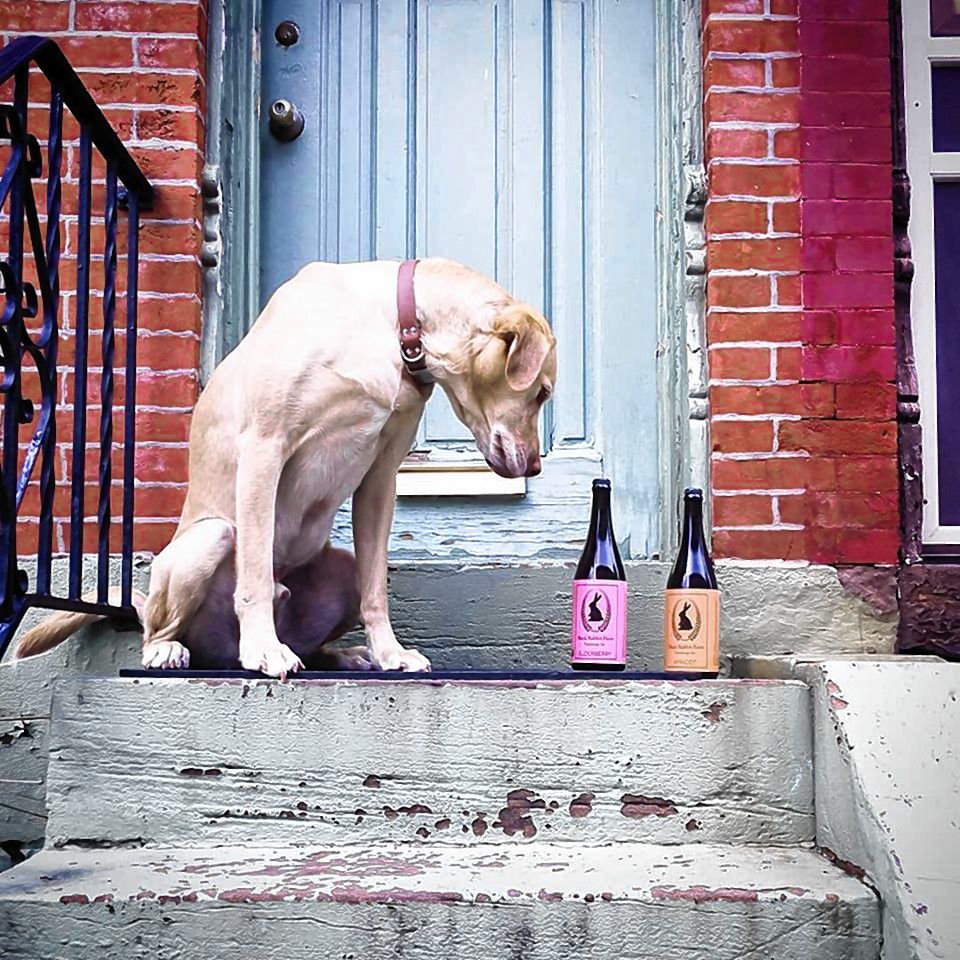 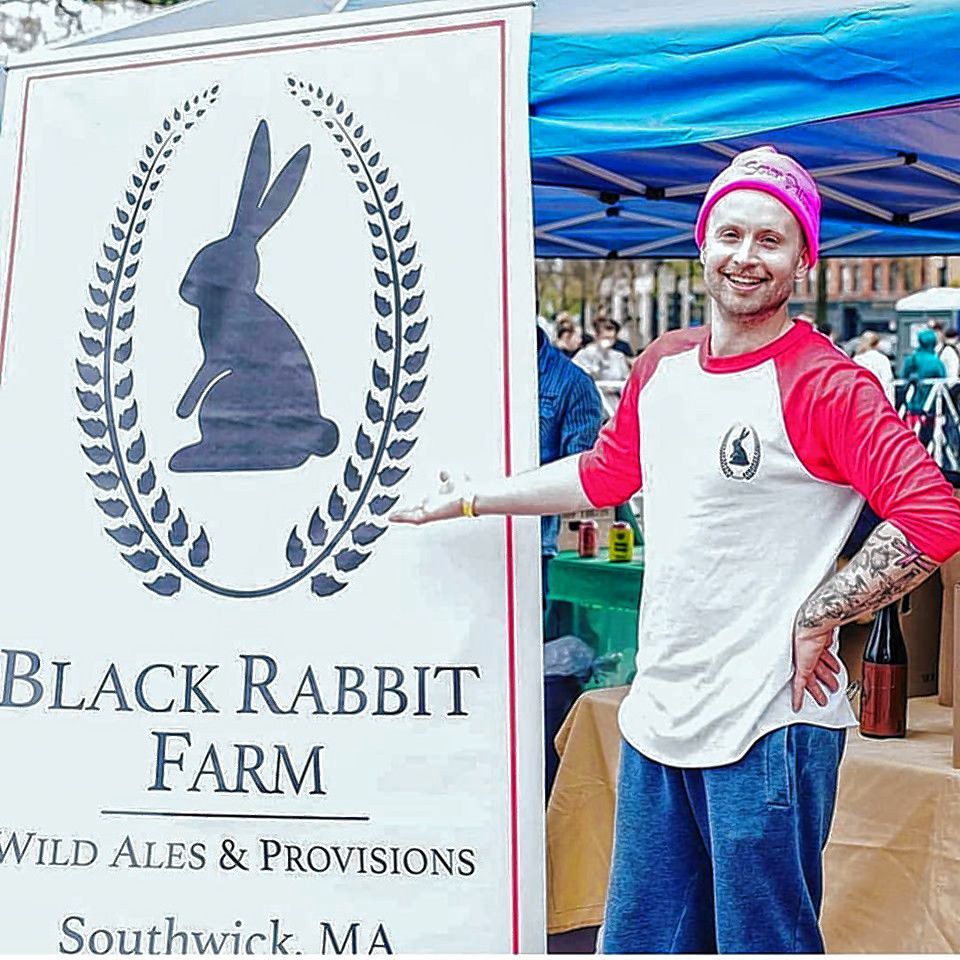 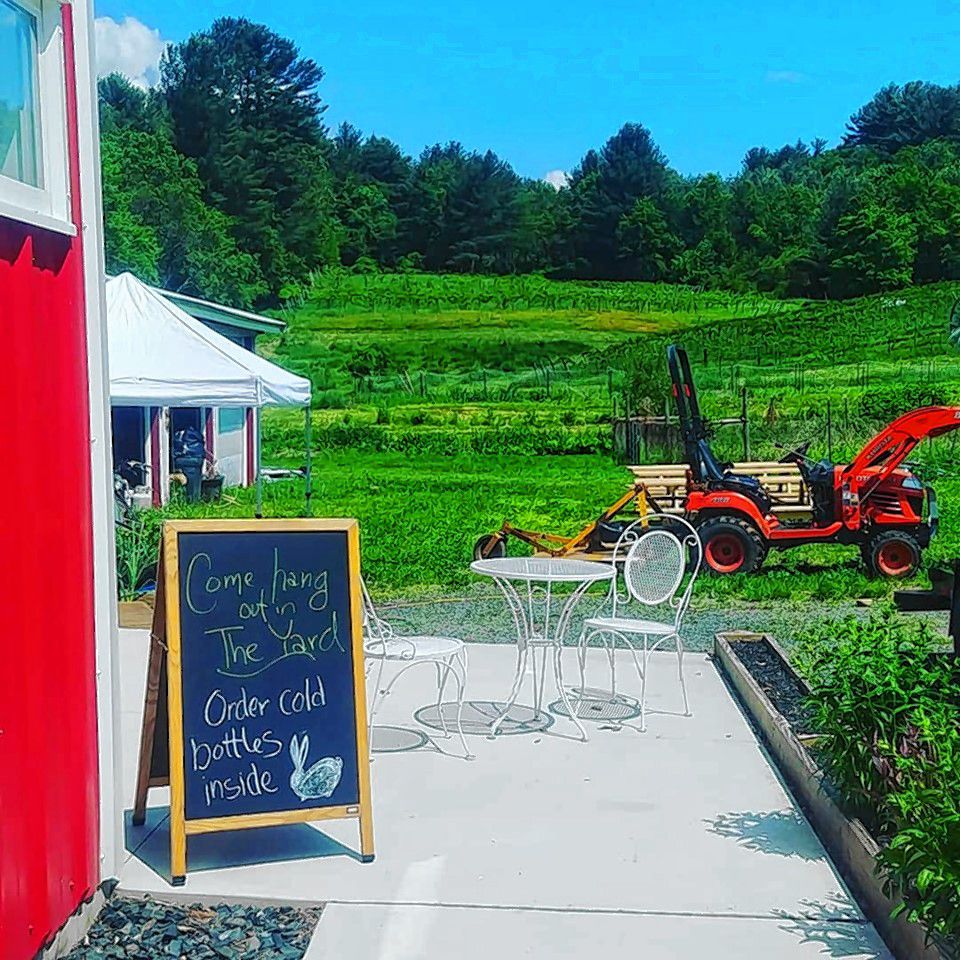 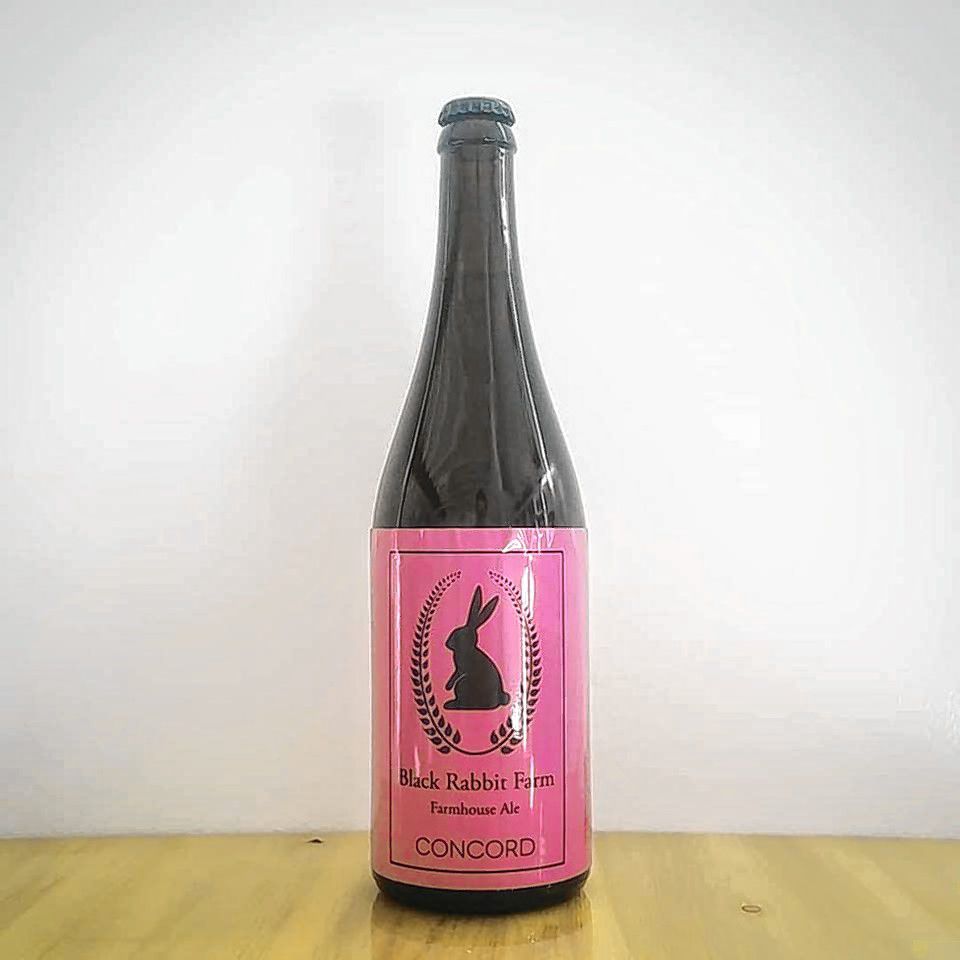 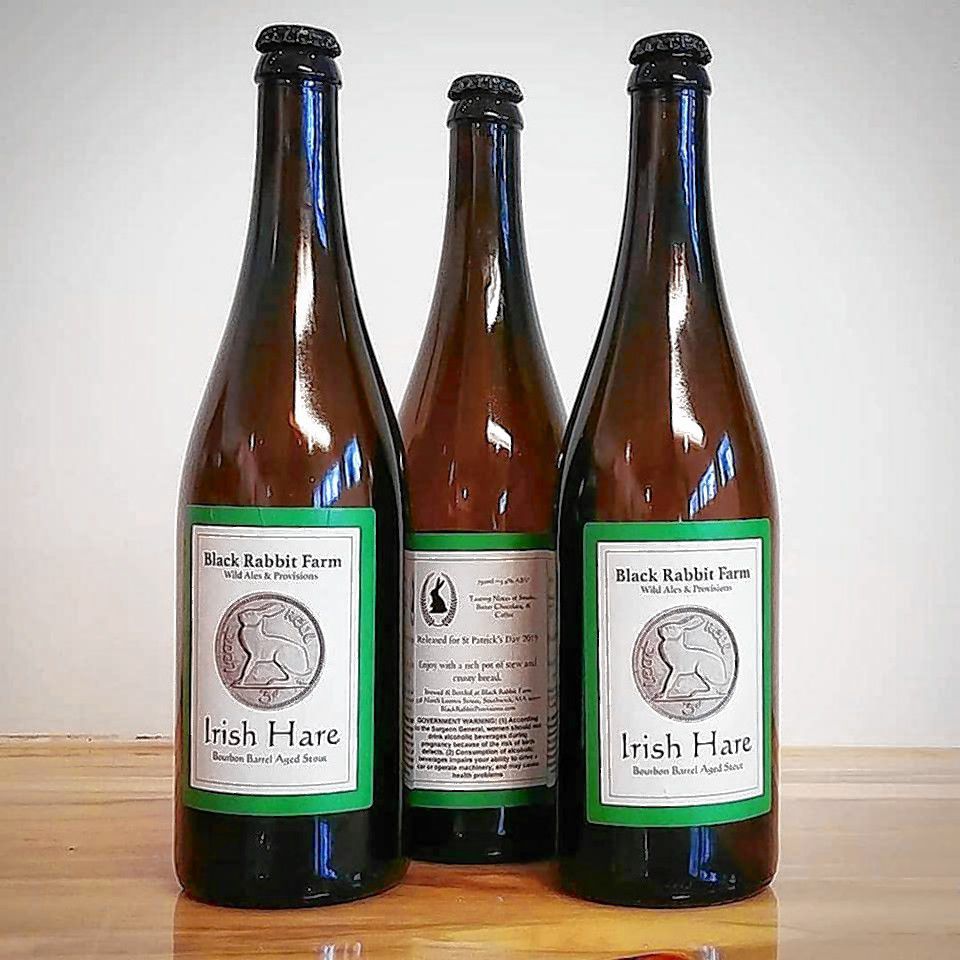 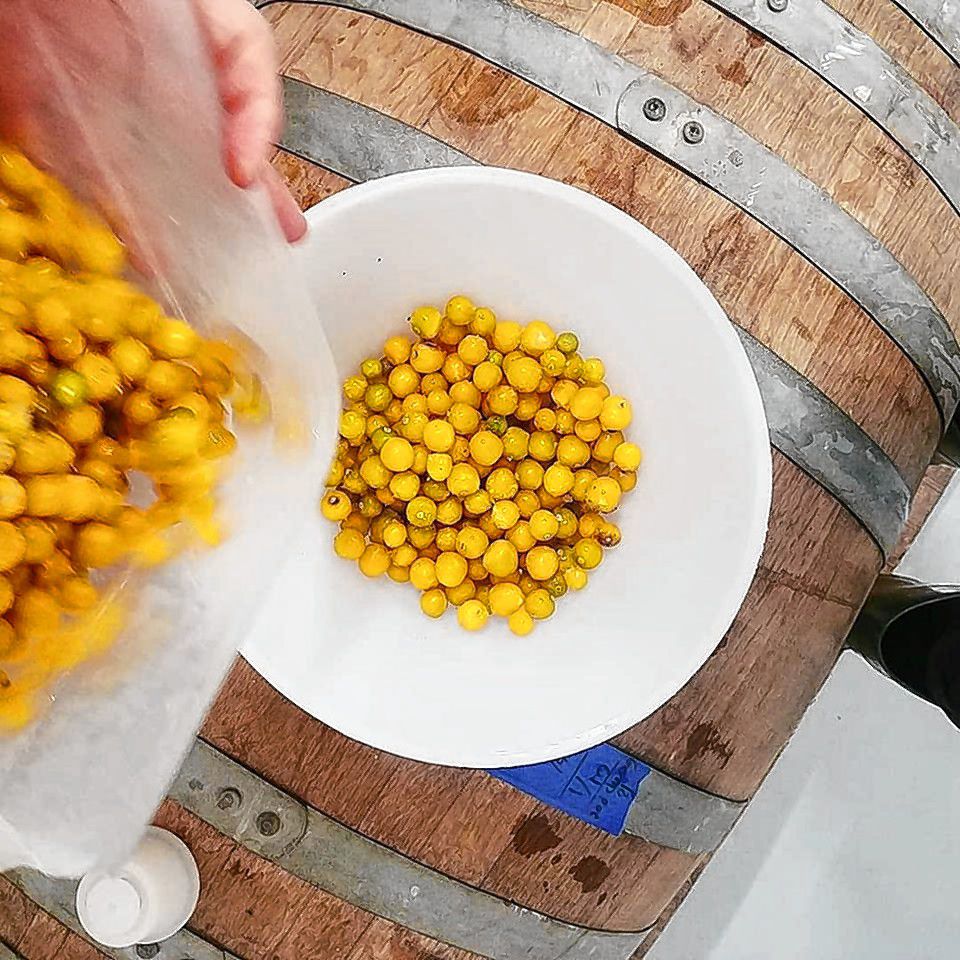 Lauren Kendzierski had enough on her plate. By the time she decided to turn her homebrewing habit into something commercial, she was already managing a 10-acre farm with an orchard and vineyard, running the popular food truck and catering business Chanterelle To Go, wholesaling her farm-to-freezer meals at stores in Western Mass and Connecticut, and foraging some work as a culinary business consultant. 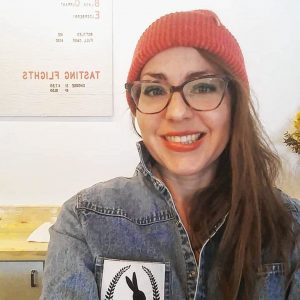 But just as certain trees grow from shared root systems, Kendzierski is finding that her homemade wild ales — which began appearing this spring at Black Rabbit Farm in Southwick — are connected in simple, nourishing ways with everything else the farm produces.

“I like being able to make beautiful, healthy, locally-sourced, awesome food and not charge a million dollars for it,” she says. “The beer was a logical next step.”

Black Rabbit Wild Ales are bottled and sold at the new farm store, Black Rabbit Provisions, which also sells jams, pickles, tomato sauces, hot sauces, pestos, soups, and other seasonal items. It’s the kind of good food, good beer synergy that breweries on active commercial farms are especially good at. Black Rabbit joins the brewery at Outlook Farm in Westhampton in this category, and we can only hope a trend will catch on.

The ales at Black Rabbit Farm are light, crisp beers with a tart finish that pair nicely with food. “Brewed in small batches using locally-sourced grain and hops with our own estate-grown fruit and aromatics,” reads Black Rabbit’s website, “each ale is naturally fermented and aged to showcase the finest flavor in each ingredient.”

Kendzierski, 37, has been homebrewing for four or five years, but she’s been in the food and restaurant world for her whole adult life. Born in West Springfield, she got a degree in culinary journalism from UMass Amherst and moved to New York City, where she joined the French Culinary Institute and ran and opened several restaurants.

Having returned to the Valley several years ago, Kendzierski now runs Black Rabbit Farm with a small staff, plus friendly assistance from neighbors and friends (bottling night at the farm, for example, has become a community event).

“The way we make beer is not the way other breweries typically go about making beer,” she says. “We look at it more from a food standpoint. The farm is a cool place where people can come and eat natural foods. It’s really about the amazing ingredients, and just minimally processing them. The beer we treat the same way.”

The beer offerings break out into three categories: farmhouse ales that are crafted from a single recipe and individually flavored, wild ales aged for a minimum of 12 months, and a line of barrel-aged ales for the farm’s occasional quirky projects and experiments. 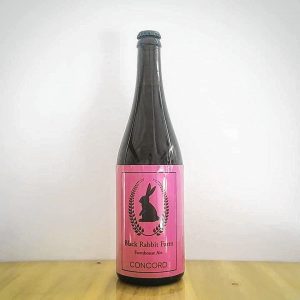 “The farmhouse ales are our signature line,” says Kendzierski. “We kettle-sour those in stainless steel with a blend of yeast.” The three perennial ales in this category, priced at $12 per 750-milliliter bottle, are a barrel-aged ale called All Cooped Up that is bottle-conditioned with maple syrup, and ales made with either Concord grapes or elderberries grown on the farm. For Father’s Day, Kendzierski will debut a strawberry knotweed beer. A blueberry-blackberry beer is also on the way. “These are light, effervescent, tangy, not-so-crazy sour,” she says.

Black Rabbit brews limited-edition wild ales during the winter, to be aged and then bottled later this fall. “We just picked and chopped some rhubarb and threw it in there,” Kendzierski says about one of these wild ales. “We grow some esoteric fruits on the farm, like ground cherries and huckleberries. We hope to have a field of cranberries next year, so we’ll do a Lambic-style cranberry beer. We’re also picking honeysuckle and elderflower, which we’ll put into a golden ale, so the yeast from the flowers and all of the aromas will really add to that.”

Some additional barrel-aged ales were done this year only, she adds. “We wanted to have a little more variety, until our wild stuff was available.” For St. Patrick’s Day, the farm released a smoky, bourbon barrel-aged Irish stout. On June 13, Black Rabbit will begin selling three more ales: a dry huckleberry farmhouse ale aged in a wine barrel for 10 months and on fruit for four months; an “ancient ale” made with honey, raisins, coriander, and saffron; and a 60-gallon batch of orange cream ale made with a case of fresh zested and juiced oranges.

Fans of sour beers and wild ales will grasp the appeal of ingredients like this. Craft beer fans who prefer stronger, maltier, hazier, or hop-heavy styles may see this cornucopia of fruits and spices as a little too off-the-map. 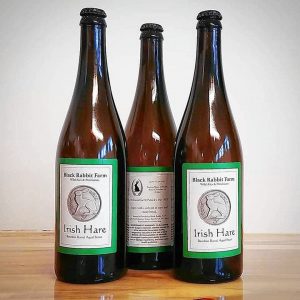 But the bubbly borderlines between fruits, grains, and other fermented crops can be mysterious, and provide an opportunity for play. At times, the flavors that characterize certain sours and wild ales as opposed to, say, wines can be hard to distinguish.

“I think of our brewing as an extension of working with food,” says Kendzierski. “We also make lacto-fermented pickles, hot sauces, and vinegar, and it’s all the same to me. We come at this from a culinary perspective, rather than a scientific perspective — which is the way a lot of people brew.”

“I prefer to make beer more like you make bread,” she explains. “You have to listen to what it is. You work with it, see what it wants to do, and try to make it be the best it wants to be, instead of trying to corral it down a narrow path.”

Black Rabbit’s pumpkin beer is a good example. “Basically, I hate everyone’s fruit beers,” says Kendzierski. “They don’t taste right, and pumpkin beers are usually really weird. So, we open-fermented ours using this incredible red hubbard squash that my neighbor grew, and we put some in a bourbon barrel, some in a wine barrel. We’ll see which we like more. But it will be more like low-alcohol champagne, and you’ll just get a light sweetness from the pumpkin. No cinnamon or clove or nutmeg — it will have a nice, clean flavor.”

This is why all bottles of Black Rabbit ales come with food pairing suggestions on the labels. Many of these suggestions are crowd-sourced. “We bring it up all the time with visitors to the farm, and people totally get it,” Kendzierski says. “When you taste our elderberry farmhouse ale — dry, acidic, a little earthy — picture eating a nice piece of aged cheese. The apricot farmhouse ale just wants to be enjoyed outside with barbecued chicken.”

Sour beers pair particularly well with food. Thanks to their acidity and brightness, they can cut through fat and cleanse the palate. It’s why steakhouses serve pinot noir and burgundy wines with their choice cuts.

“On a farm, it’s all the same,” says Kendzierski, laughing. “I think what gets lost in American beer culture is the connection to why you make it, what you make it with, and why you do it that way. With wine, all you have to work with is grapes, and tiny differences can really change a product. But when you buy every ingredient for a beer, you mostly get what you order. That’s why I want to make beer that I can only help along, instead of making it do exactly what I want it to do.”

Bread doesn’t come out the same every day, and you can’t be upset about it, she says. “And local bread is amazing, because bakers have learned to listen to their bread. We’re trying to do the same thing with the beer.”

For now, the majority of visitors to Black Rabbit Provisions have never tried sour beer, Kendzierski says. “They’re coming in because it’s a farm, and they live in the area, and they’re curious. But most people love the beer, which has been the greatest joy for us. The flavors aren’t too crazy in-your-face. Like our food, we want it to be interesting and available to everybody.”

“Everything’s connected,” she adds. “All farmers understand that.”

Kendzierski plans to host some tasting dinners at the farm, complete with beer pairings. Black Rabbit is also working out a limited plan for retail and restaurant distribution of its ales. In the meantime, the only place to pick up a bottle — plus a few extra provisions — is at 358 North Loomis Street in Southwick

Following a successful online fundraising campaign in May, Two Weeks Notice Brewing Company finished building out its West Springfield taproom a few blocks from the Eastern States Exposition. The brewery’s Bosworth Street location — a former tortellini factory — now offers full pours, tasters, and can sales at its sizable bar on Thursdays and Fridays (4 to 9 p.m.) and Saturdays (noon to 9 p.m.). Hours may change or increase, so follow along on social media.

Congratulations to Leadfoot Brewing in Chicopee, which also recently opened its doors to the public. The ribbon-cutting ceremony was held at the 30-barrel brewery’s 5,200 square-foot space in an industrial area off North Chicopee Street on May 17. It marks the return of craft beer to Chicopee, which hasn’t had a hometown brewery since 1975, when Piels Beer ceased production. Before Piels, this historic network of buildings was Hampden Brewing, founded in 1894. “The water here is great,” said Leadfoot co-founder Pat Randall in an interview with the Beerhunter last August. “It’s the perfect water for pilsners and lagers. There’s a reason there used to be a brewery here.” Cheers to a new era in Willimansett.

White Lion Brewing Company is currently building out its new space at 1500 Main Street in Springfield, but the crew has been just as busy planning its outdoor summer events. Hang out with White Lion offerings, plus live music and food trucks, at the Summer Party Block Series in Westfield. The family-friendly event runs from 5:30 to 9:30 p.m. in the parking lot at 53 Elm Street on June 13, July 25, August 15, and September 5. And White Lion’s Summer Beer Garden in downtown Springfield is now up and running as well. Check that out (at the corner of Bridge and Main streets) Wednesdays through Fridays 4 to 9 p.m. and Saturdays noon to 6 p.m. through August 31.