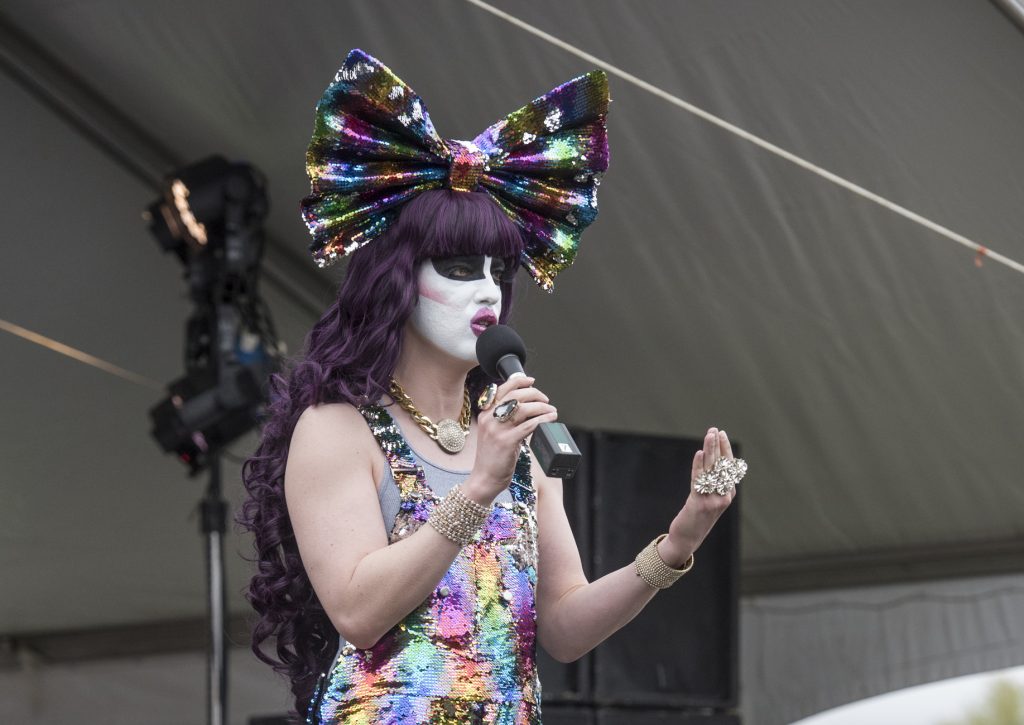 Hors D'oeuvres was emcee for the entertainment at the Three County Fairgrounds for Northampton's 38th annual Pride Day on Saturday, May 4, 2019. Kevin Gutting photo

The month of June means that it’s officially LGBTQ+ Pride Season, with pride marches moving across the country from the east to the west coasts of the U.S. Here in our humble rainbow Valley, we got started early with Northampton’s pride march and event on May 4, organized and hosted in part by local drag powerhouse Hors D’oeuvres. 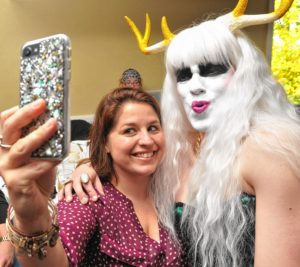 If you’ve ever read my sex column, it’s probably no surprise that I love a good drag show, but in my experience the multifaceted drag and neoburlesque events that Hors orchestrates are above and beyond a “good show” — they’re community built through performance, they’re body empowerment, they’re queer celebration and solidarity, they’re educational, they’re sexy, hilarious, political, (sometimes literally Hershey’s chocolate) saucy, and they’re always a lot of flippin’ fun.

But that’s just me. Like most pride celebrations, our local one brought up a lot of conflicting feelings and opinions about LGBTQ+ community, visibility, gender, privilege, and inclusivity — some more directed towards Hors than others. On June 5, an opinion piece was published in the Daily Hampshire Gazette by columnist and former media spokesperson for Northampton Pride J.M. Sorrell in which she expressed her concerns that drag and Hors’ work in particular is, at its heart, making a mockery of women, feminism, and perhaps even misplaced in a pride celebration itself.

As a longtime fan of Hors and her work, the personal experience I’ve had of Hors’ shows stand in stark contrast to what I read in Sorrell’s descriptions. Knowing Hors’ devotion to her works’ various social justice missions, I was sure she’d be busy crafting her own response to Sorrell’s columns (and she did, Hors’ response was published in the Daily Hampshire Gazette on June 10), I still felt curious about how Hors herself thinks about the role of misogyny, feminism, and the inclusion of drag in pride spaces. Here are some of her thoughts:

Yana: How did you get started doing drag performances here in Western Mass?

Hors: The first time I did drag was around 2001 in Texas. After I moved to Massachusetts for graduate school in 2006 to pursue a PhD in Sociology, I noticed that there were very few opportunities for LGBTQ+ people to connect in person outside of Diva’s Nightclub. People constantly said “everywhere in Northampton is gay” but that didn’t provide any real sense of community. 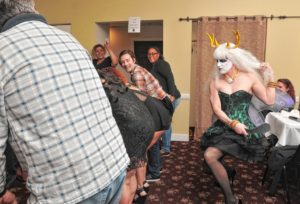 In 2009 I started cooking up a new character that reflected my own journey from Texas to graduate school and thinking of ways to build that community for people in the Valley; in 2010 I started Bon Appetit Burlesque and performing in the area as Ms(tr). Hors D’oeuvres. The rest is history.

Y: Drag is a diverse genre and can mean a lot of things to a lot of different people — how would you describe your shows’ particular style/philosophy of drag?

H: The shows I produce are all about community-building, sociological principles, feminism, entertainment, and, most importantly, love — which is also how I think of Hors as a drag character. I want everyone who comes to the shows to feel like they got a big hug from me but I also want to challenge the societal norms that people bring with them into the room. I talk a lot about race, class, gender, sexuality, LGTBQ+ issues, gendered censorship, consent, and societal ills in a way that’s meant to entertain AND educate.

Y: What do you think drag contributes to modern day social justice efforts such as feminism, the continued struggle for LGBTQ+ rights & equality, and other topics you address in your shows such as consent, anti-street-harassment, and sexual freedom?

H: Drag, at its core, is about blurring gender lines which, makes drag an easy introduction to conversations about sex and gender. However, the real beauty of drag — and let’s be honest, neoburlesque is drag as well — is that now, more than ever, drag is for everyone.

The modern mainstreaming of drag has gotten more people interested in the artform [so] people are bringing in new perspectives, new bodies, new lived experiences and it’s making the artform even stronger.

Y: J.M. Sorrell’s opinion column clearly expressed her perception that drag and your work is misogynistic, exploitative of women, and a “damaging version of femininity,” amongst other things that seemingly run counter to your mission. What do you think? What makes drag misogynistic or not?

H: If we’re going to call out these critiques, let’s be honest about the intensity: J.M. also compared drag to blackface. As I said in my response piece, to portray drag as a mockery of women (or any gender) is a misrepresentation of the artform in so many ways.

But is drag, at its core, a mockery of women? Absolutely not. Drag is a celebration of the ways we play with gender expression as a social construct and encompasses perspectives from a diverse population of intersectional identities.

Y: I’m sure, like with most performance acts, some iterations are hits and some are misses. Have you ever experienced a drag performance as controversial, offensive, or even just a little off? If so, what was your response?

H: Drag is part of real life and real life is messy. There have been people in shows I’ve watched and my shows over the years who have gotten it so very wrong — not intentionally or maliciously — but because thinking about societal ills and power dynamics just wasn’t something they were ever taught to do. 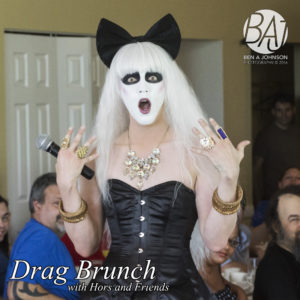 I address these situations at my shows both in-the-moment to the audience over the microphone and then with the performer afterward. For example, let’s say something unintentionally racist or sexist comes up during a performance. I want the audience to know that yes, I saw this issue and I take it seriously. Then, later, I’ll talk with the performer who crossed the line about why it was inappropriate and how they can better their drag.

You have to teach people in order for them to improve and those are definitely lightbulb learning moments for most performers.

Y: Running events like yours as a public figure can be a ton of work! What has the general response from the local community been about your work? What keeps you moving forward?

H: I always make the joke, “If you’re not constantly thinking about quitting, are you even producing events?” I’m a pretty sensitive person behind this drag warrior exterior and I’ve dealt with a lot of local people and venues who have been cruel or just outright homophobic.

In those situations, I’ve been lucky enough to have my work and the community who has experienced that work speak to those critiques publicly. It’s those people who have this community in their hearts, who let me know how the shows have impacted their lives in positive ways, that keep me coming back. As long as there’s a need for safe spaces for the LGBTQ+ community and our allies, I’ll be here.

Y: What are your Top 5 Tips for creating good, informed drag performances?

H: 1) Take the time to think about your drag character and develop a backstory.

2) Know your drag, civil rights, and pop culture history. Knowing about existing ideas and experiences in the larger culture are essential in developing your art.

3) Tell me a story with your performance, a story that means something to you and resonates with your character. It doesn’t need to be serious but it should be authentically you.

5) Think about how you’re using your voice. Every performance is a conversation with the audience and what you’re saying in that conversation matters and will impact others. Be the person who knows better and makes informed choices.

Hors D’oeuvres is a drag performer, feminist, local activist, organizer with Noho Pride, and producer of shows like Drag Brunch with Hors and Friends, Bon Appetit Burlesque, and D’oeuvres Court Charity Drag Competition. Find Hors & details about all of her events on Facebook at facebook.com/houseofhors and on the soon-to-be-revamped website houseofhors.com.