Monte Belmonte Wines: A ‘Shot Through the Heart’ of Bon Jovi’s Wine Venture 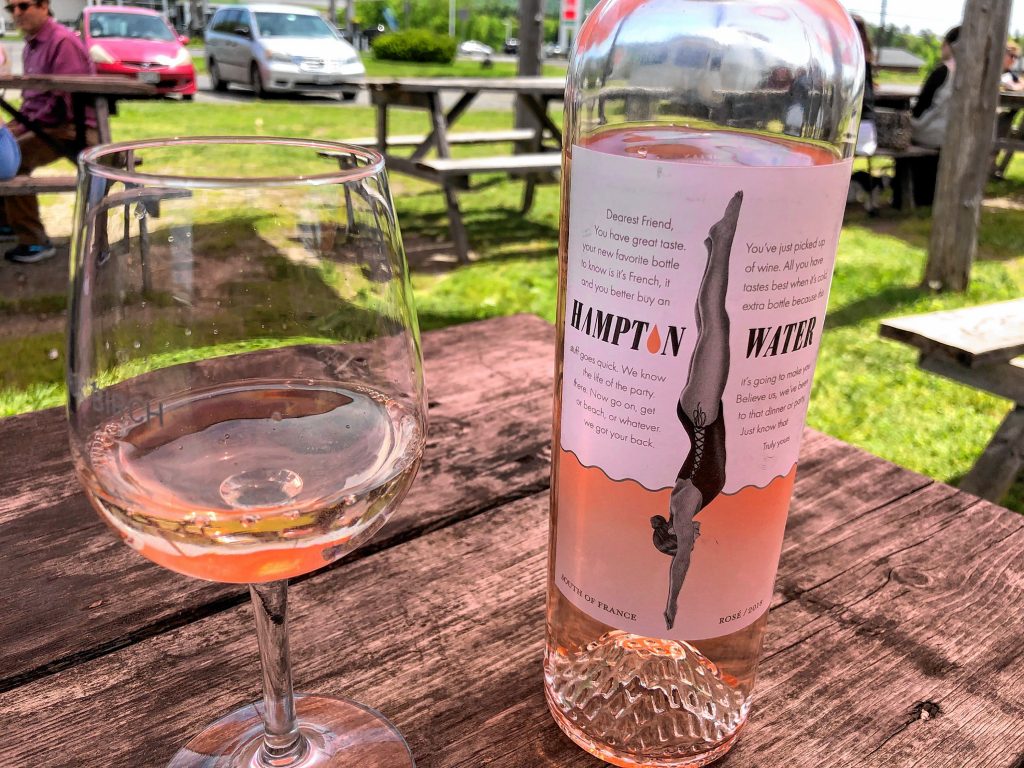 It’s all the same. Only the names have changed. Everyday, it seems we’re drinking rosé.

Sometimes you tell the day by the bottle that you drink. And times when you’re all alone, all you do is think. About rosé.

Also, it’s not all the same.

New Jersey’s second most famous rock icon, Jon Bon Jovi, and his son have a joint wine venture called Diving Into Hampton Water. According to several media outlets who’ve covered the celebrity brand, Jon Bon Jovi’s son, Jesse Bongiovi (I appreciate the return to the original Italian spelling), was visiting his pop’s place in the Hamptons. And according to Bongiovi, the “pink juice” flows like water at his dad’s house. So much so that Bongiovi jokingly referred to it as “Hampton Water.” And a brand was born. Admittedly, I’ve come up with a good idea or two based on a bad joke. I once organized an eclipse watching party at Captain Jack’s in Easthampton solely based on the fact that “Eat Clams at the Eclipse” sounded like a boffo name. Also, I freaking love clams. And, as I’ve mentioned in this column before, it’s BYOW there.

But how to turn a joke into a bottle of wine? 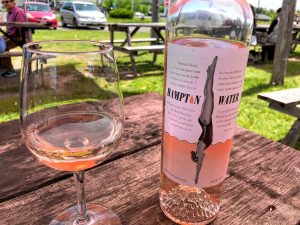 It just so happens that Bongiovi, who was a star football player at Notre Dame, and Bon Jovi are friends with the biggest winemaking exporter to the U.S. — Gérard Bertrand. Bertrand is a former rugby superstar in France. Together, the two star athletes and the rock star would create a jock/rock wine — Diving Into Hampton Water. The rockstar said to his son in so many words “take my hand and we’ll make it, I swear” and launched an all-out marketing offensive, buzz marketing the wine at bars and restaurants and fancy Hollywood parties. Bongiovi told Fox News “if we’re having a hard time with a place, my dad will stop in for lunch, and be like ‘Have you heard of Hampton Water?’… That’s kind of been our secret weapon when we need to get the really big things done, which has been really helpful to have.” They’ve seen a million faces and they rocked them all. Last year Wine Spectator named Hampton Water the best rosé of 2018. They gave it 90 points. Hampton Water was going down people’s throats in a blaze of glory.

But now, dear reader, is the point where I make a shot to the heart of Hampton Water. And I’m to blame. Hampton Water is a bad name. There was a part of me that thought while drinking it “IS this water?” I found the wine to be only slightly as fruit-forward as I wanted it to be on the palate. It had virtually nothing for me on the nose. There is nothing wrong with this wine. It’s just underwhelming. I will say that the wine was “slippery when wet.” Hampton Water is better than “bad medicine.”

Gérard Bertrand produces some really great and affordable wines from the Languedoc-Roussillon region in France. And their Bertrand/Bon Jovi/Bongiovi joint venture rosé reflects the grapes of that region. It’s a rosé of Grenache, Cinsault, and Mourvèdre. While Gérard Bertrand is listed on the label as the winemaker, the wine is said to be “bottled by” Jesse Bongiovi. I’ve asked a few wine professionals exactly what “bottled by” means in this instance. No one was quite sure.

The 90 points Hampton Water garnered from the Spectator is a solid score, if scores are something that matters to you. But 90 is the best worst score. Rarely does that magazine publish reviews of anything under 80 points. Scores in the high 80s are not often celebrated. Of the Wine Spectator’s top 100 wines last year, the top wine had a score of 97. A wine that scored a 90 doesn’t show up on the list until you hit number 56. Hampton Water is ranked at 83. Hardly a chart-topping hit for Bongiovi. That wouldn’t even make it onto Casey Kasem’s countdown. That being said, it is the top rosé on that particular list.

Does its score and its ranking as the top rosé of last year have anything to do with the full-page ads that the Bon Jovi clan took out in Wine Spectator? Who knows? Do the people that advertise in this here Valley Advocate have a greater shot at winning the reader’s poll? I can’t honestly answer that either. In both instances, I’d like to think not. I’ll “keep the faith” that all of the ranking and scoring is above board. But when it comes to Diving Into Hampton Water, these five words I swear to you: you’re paying for the name. The Bon Jovi/Bongiovi wine retails for around $25. I can find you at least half a dozen better rosés for $15. You’re paying 10 extra dollars for the famous name, without even getting the famous spelling on the label.

Here is what I do love about this wine. If I were a rock star and my son wanted to make wine — THIS IS EXACTLY WHAT I WOULD DO FOR MY SON! In a video for Wine Spectator Jon Bon Jovi talks about his favorite part of the Hampton Water project, “For me it’s working with my son. The joy of him coming up with this concept, the label, a business plan, was great. And to see it come to fruition and the way it’s been accepted is as joyous an occasion as a father can have.”

“It doesn’t make a difference if we make it or not. We’ve got each other and that’s a lot. For love we’ll give it a shot.”

Diving Into Hampton Water is just one of a handful of celebrity rosés out there. The only other I’ve tried is the Sofia by Francis Ford Coppola. That wine is not as good as Sofia Coppola — director of Lost In Translation or The Virgin Suicides — but it is WAY better than Sofia Coppola — actor in The Godfather: Part III. Drew Barrymore has a rosé called Barrymore and somehow Bran-gelina still have a rosé from an estate they jointly own in my favorite place for rosé — Provence. But I am not going to buy these wines because, again, you are paying more for the famous name behind the wine. I at least appreciate that the Bongiovis decided to try to do this wine thing right and go with a very reputable maker. It is not a so-called “white label” wine where they just slap their famous name on a label and watch the money pour in. But as far as rosé goes, I think there are better. And ones more deserving of top rosé of last year.

I wanna lay you down on a bed of rosés. How about the Commanderie de la Bargemone Coteaux d’Aix en Provence Rosé 2018 for $16 or $17? Or the Domaine de Fontsainte from Corbières for about $15? Or even the Arrumaco rosé from Spain which you can sometimes find for under $10? If you have a huge Bon Jovi fan in your life who loves rosé, baby, it’s OK. Hold onto what you’ve got. It doesn’t make a difference if they’re ready or not. Get them a bottle of Diving Into Hampton Water. If you forgot to get your father something for Father’s Day and you want to give him a wine with a heartwarming story about a father doing right by his son and helping launch a wine label, lay your hands on Hampton Water.