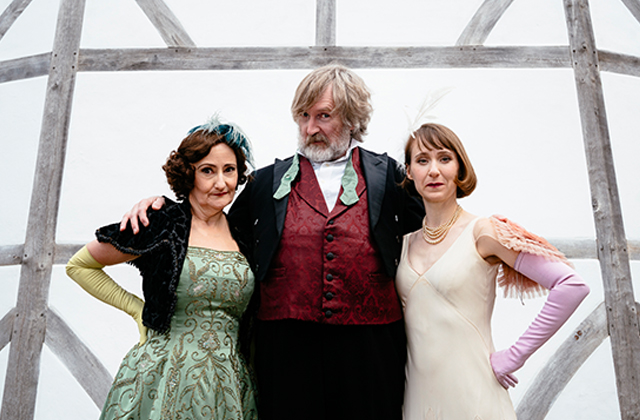 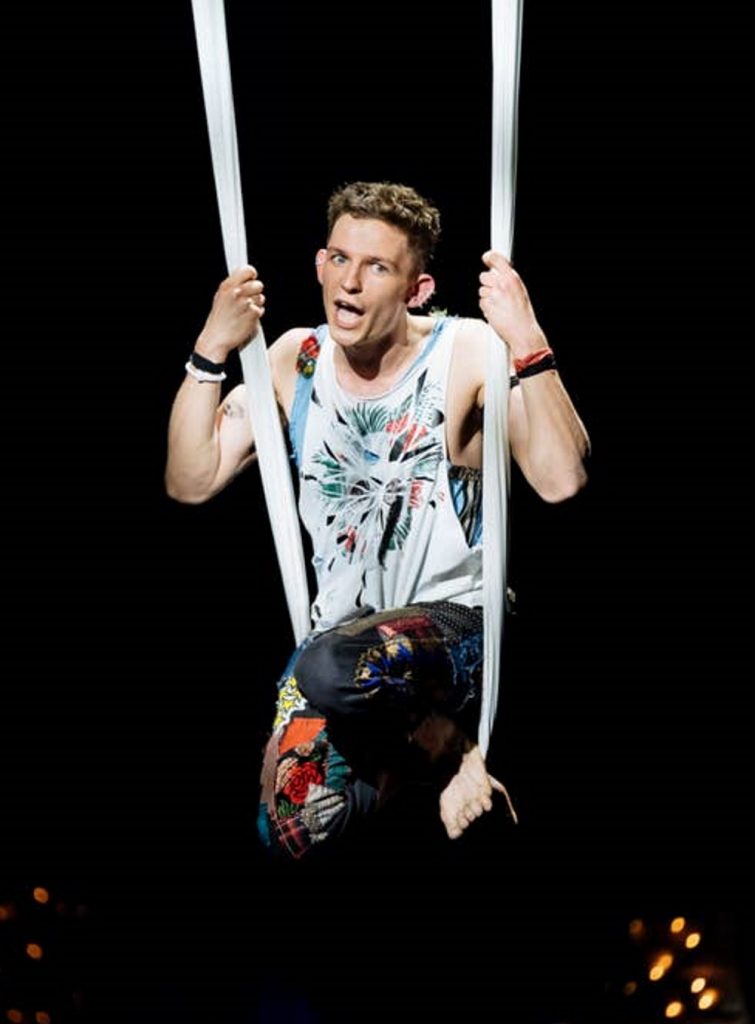 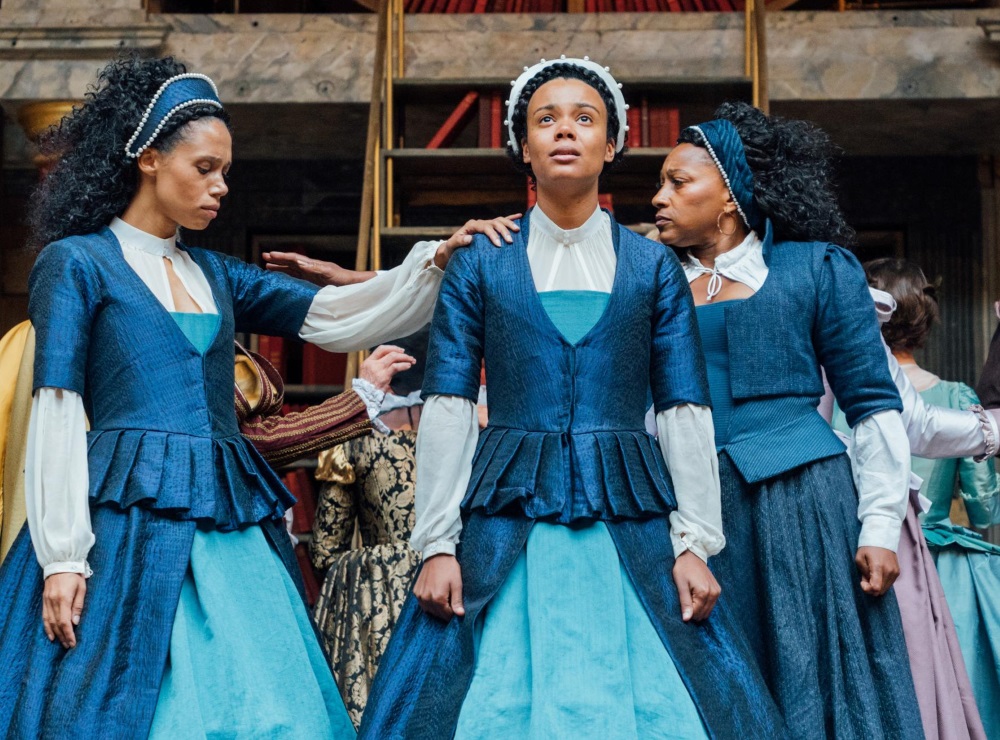 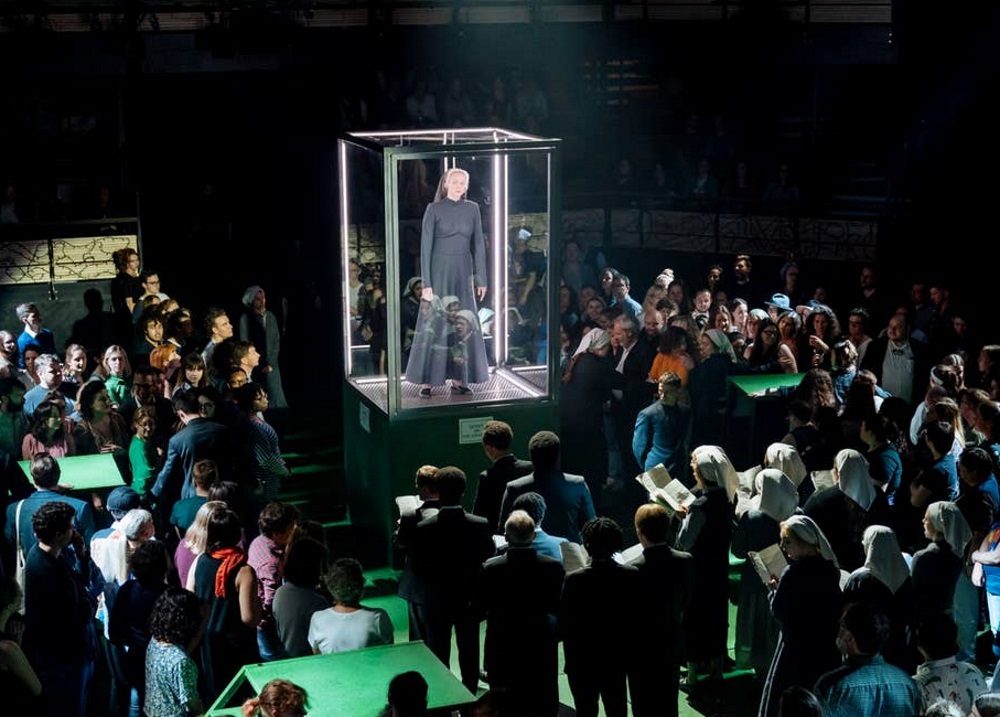 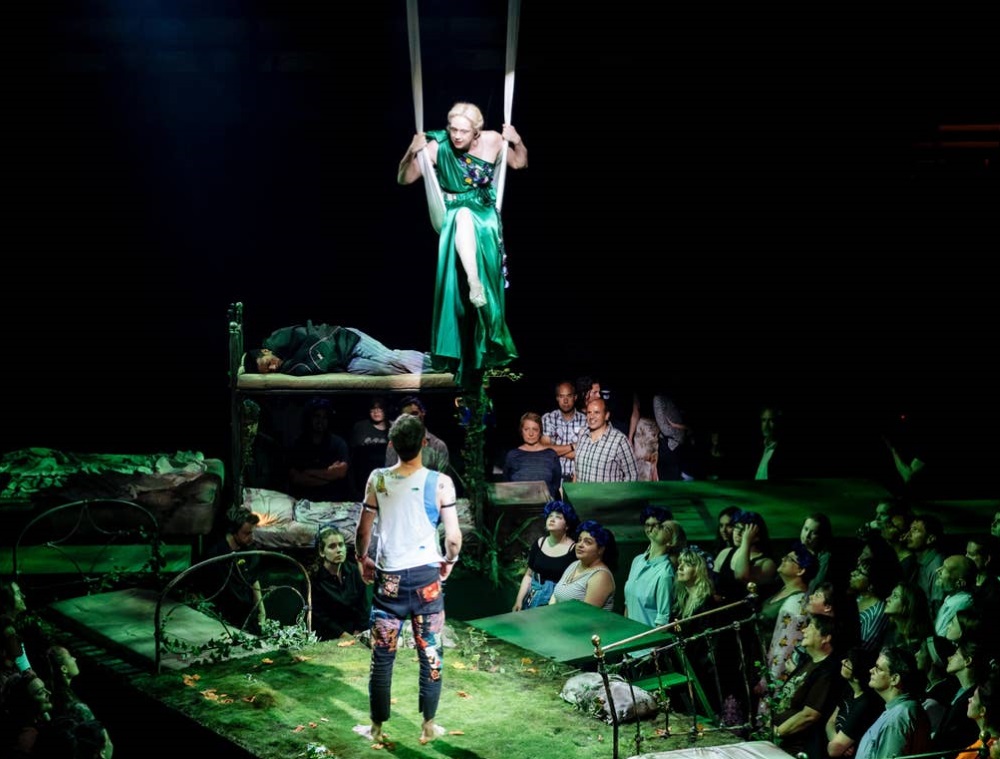 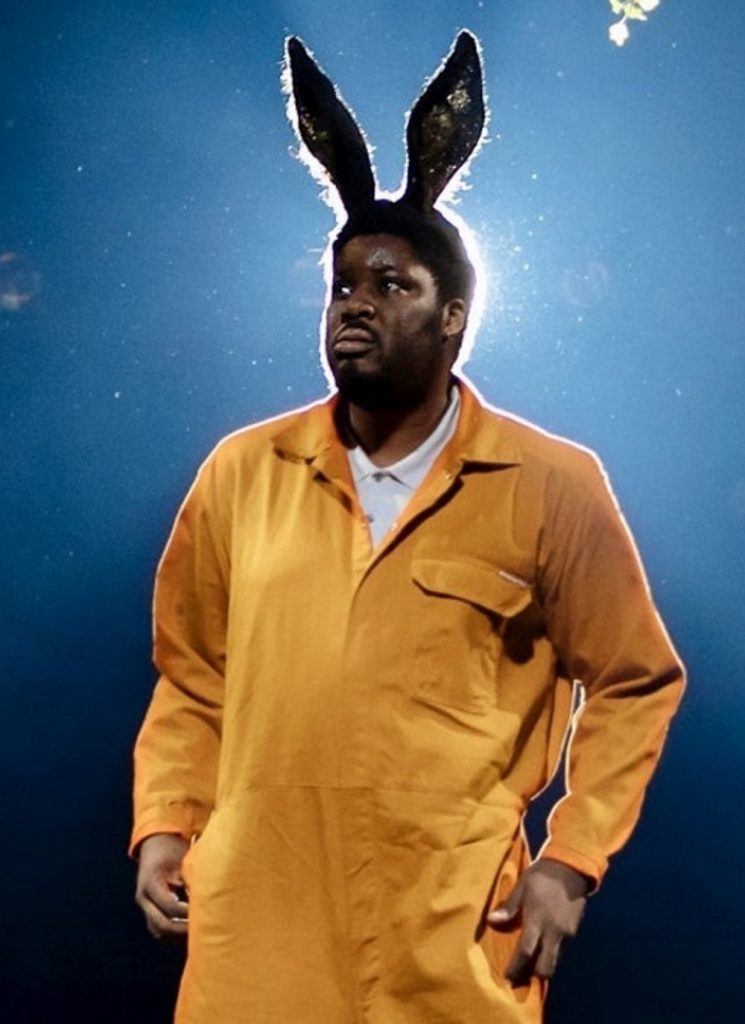 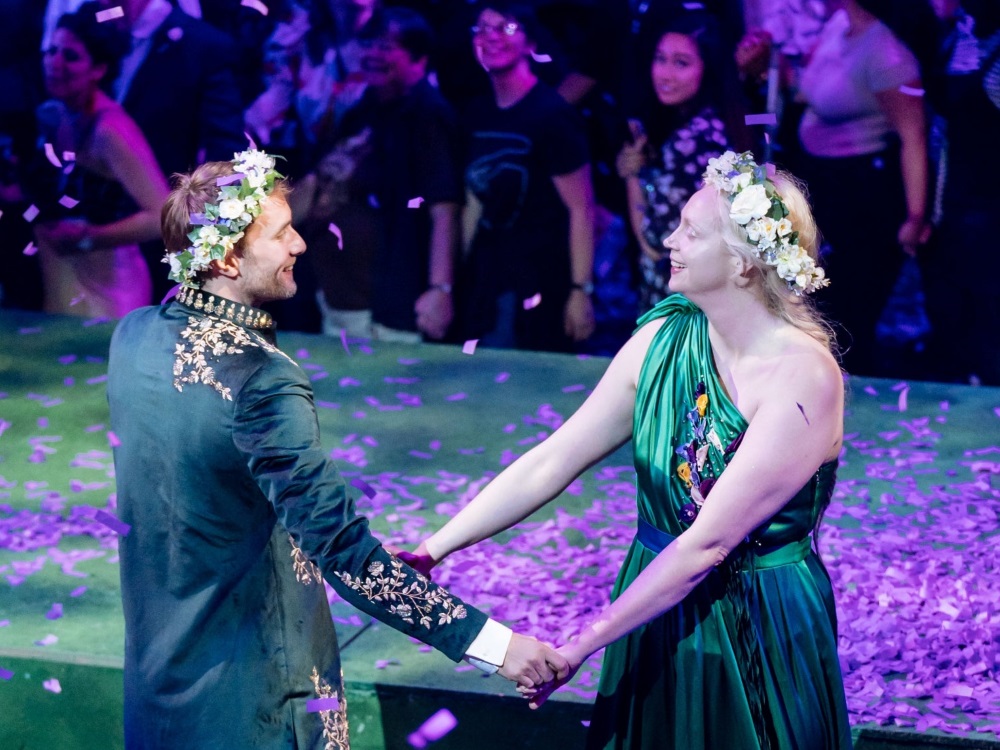 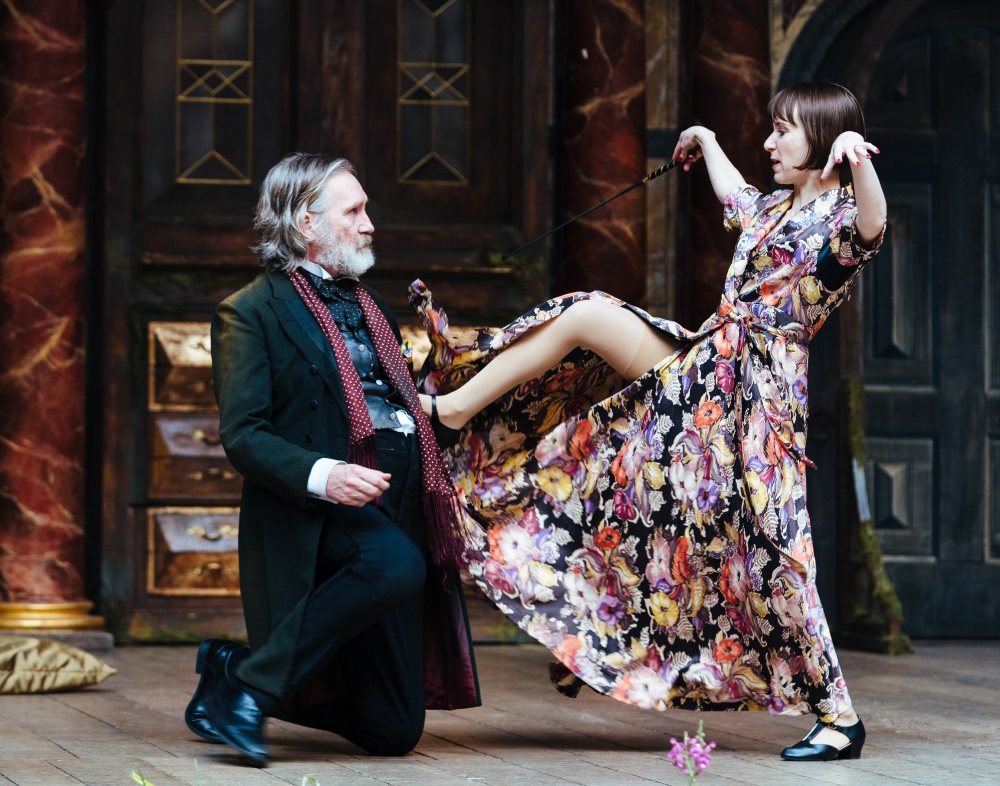 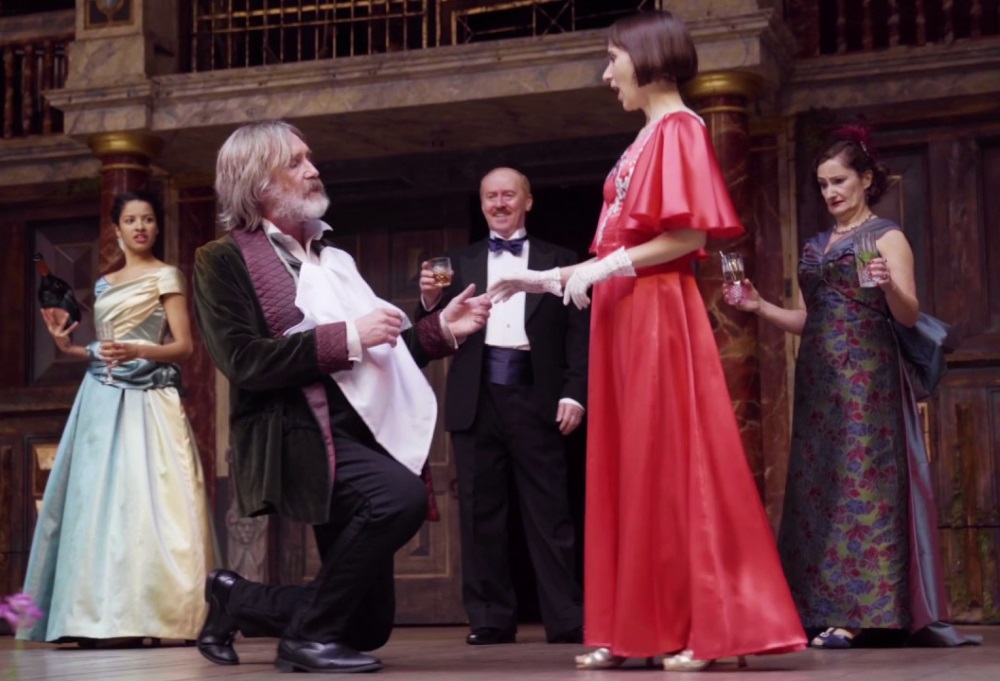 When I was in London this month, I saw two Shakespeare plays. No, make that two and a half: the Bard’s most popular comedy, one of his least performed, and a new play in which he’s a character – and a plagiarist.

Just a stroll along Thameside from the National Theatre, where Nicholas Hytner was artistic director for 12 years, is his new venture, the Bridge Theatre. Now in its third year, it’s a completely flexible space where one show can be staged behind a standard proscenium and the next on a bare floor in the round. 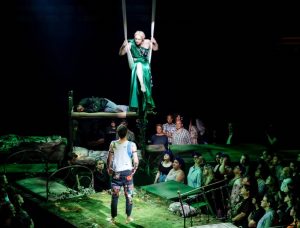 The latter is the setup for A Midsummer Night’s Dream, an immersive approach in which mini-stages rise from the floor and are surrounded by the audience, who first become the citizens of Athens and then the denizens of the magic forest, up-close observers of the swirling action. (Some of us observed from comfortable ringside seats.)

This version of the midsummer romp begins rather darkly. Duke Theseus of Athens has captured Hippolyta, the Amazon queen, boasting, “I wooed thee with my sword and won thy love doing thee injuries,” and plans to wed her willy nilly. In today’s #MeToo atmosphere, Hytner hasn’t shied away from the nasty implications of that courtship. At the start, Hippolyta is confined in a glass cage, her attendants are garbed in headscarves and tunics that echo The Handmaid’s Tale, and her submissive words are dripping with bitter sarcasm. 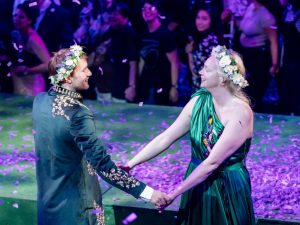 Once we enter the fairies’ wood, that theme is brushed aside – almost. Oliver Chris and Game of Thrones’ Gwendoline Christie, who play Theseus and Hippolyta, double as the fairy king and queen. It’s a common ploy, but here the two roles are switched – Oberon’s lines and action are given to Titania, and vice versa, reversing the power dynamic. So the mischief-making Puck (David Moorst, an antic punk) is now Titania’s to command, and it’s Oberon who awakens under a spell to fall in love with – a man.

That man is Bottom, self-styled star of the troupe of “rude mechanicals” who meet in the wood to rehearse a “tedious brief” entertainment for the Duke’s wedding. Hammed Animashaun bears a striking resemblance to SNL’s Keenan Thompson and wears the same cocky/foolish grin. The unexpected gay love-match draws some of the evening’s biggest laughs, and in a production so eclectically jokey, we’re surely invited to catch the double meanings in Bottom being magically turned into an ass and becoming the lover of the fairy king. 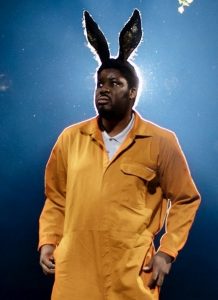 I was more taken with these touches than with the comparatively typical portrayal of the quartet of mismatched lovers whose flight into the forest first complicates then resolves their respective passions. And notwithstanding Animashaun’s delightful presence, I also found the mechanicals’ slapstick “Pyramus and Thisbe” performance relatively conventional.

What remains firmly in memory is the images: Bottom and Oberon sipping champagne in a clawfoot bathtub, Puck literally disappearing into one of the beds, and the giant midsummer moons bouncing around the audience in the everyone’s-invited dance finale. It’s running till August 31 if you’re headed over.

In some ways, what’s going on at the Bridge is what goes on every day at its Bankside neighbor, the Globe Theatre. There, in the full-scale replica of Shakespeare’s home stage, half the spectators stand in the open-air “yard” around the thrust stage, the action weaves through the crowd and the actors engage them with asides and ad libs. 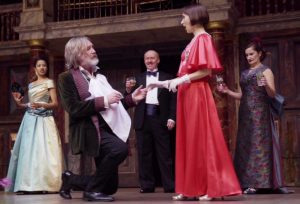 The play I saw there, on an afternoon that intermittently spat rain, is unique in the Bard’s work. The Merry Wives of Windsor, playing through October 12, the only one with no nobles or royals, the only comedy set in England, the only one with most of the text in prose, and the only spinoff, in which a character from another play gets his own show.

The oft-told story goes that Queen Elizabeth I was so taken with the figure of Sir John Falstaff in Henry IV that she expressed the wish to see “Falstaff in love,” and in response, Shakespeare wrote Merry Wives. Though the tale is quite apocryphal, the play does represent a unique change of pace for the Bard.

Unlike the other comedies, which contain life lessons and genuine romance, this one is a sex farce, pure and simple. Here, the rascally Falstaff falls, if not in love then in lust with two respectable matrons of the town, Mistress Page and Mistress Ford, who defend their chastity without – indeed, in spite of – male assistance, and conspire to humiliate him for his impudence. 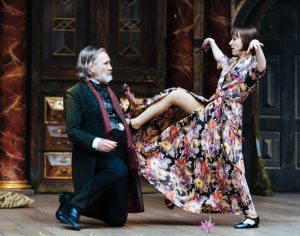 As the merry wives beguile their would-be paramour with feigned desire, there’s much running about, hiding behind curtains (and in a laundry basket), spousal jealousy, ludicrous disguises and flimsy deceptions. While Pearce Quigley is not as monstrously rotund as Falstaff describes himself, he nails the man’s trademark self-regard and aversion to admitting his own foolishness.

Elle While’s scampering production pulls out all the stops, and the audience is very much a player – beginning even before the show, when patrons are entertained in the courtyard by actors from one of the community theaters the Globe partners with, in the guise of tradesmen and women of the town. Once the show is underway, the madcap chases, propelled by a trad-jazz combo in the gallery (the era in this production is transposed to the jaunty Thirties), often scatter the groundlings in the yard.

The show’s immersive, inclusive approach reflects that of the Globe’s new artistic director, Michelle Terry, whose democratic vision embraces both on- and offstage roles. The program lists the entire company, from director to props manager, alphabetically by function, including the 13 actors as a group.

Merry Wives is such a outlier in the Shakespearean canon that you might be tempted to wonder if someone filched his characters – who also include the fat knight’s disreputable tavern-mates from the Henry plays, Nym, Pistol and Mistress Quickly, and the foolish Justice Shallow – or, if you’re on the anti-Stratfordian side of the “authorship question,” to argue that this is the only play Will actually did write, filching it from the True Author.

The authorship issue gets an airing in a new play that premiered at the Globe last year and transferred briefly to the West End on a tide of feminist enthusiasm. Emilia, by Morgan Lloyd Malcolm, focuses on Emilia Bassano Lanier, a contemporary of Shakespeare’s. Italian-born, probably Jewish, she’s thought by some to be the mysterious Dark Lady of the sonnets. 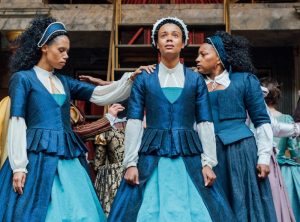 Here, she’s the headstrong, outspoken mistress of a wealthy aristocrat (fact) and eventually of Will Shakespeare (fancy). The callow young playwright is smitten by her beauty and struck by her gift for pithy remarks, which he scribbles down to put into his new script, Othello. That hypothesis isn’t exactly convincing, and perhaps it’s less a serious proposition than the still-obligatory gesture of linking an interesting but obscure woman to a famous man in order to attract an audience.

The show had closed before we got to London, but I and my partner, a Renaissance scholar, were able to view a performance video through the good offices of Globe archivist Victoria Lane. The title role is divided among three dark – in fact, black – ladies, Leah Harvey, Vinette Robinson and Clare Perkins, portraying Emilia at different stages of life, all of them forthright in their insistence of women’s right to agency and an independent voice.

Which connects nicely to those resourceful Windsor wives, and with the proud Amazon warrior and trickster fairy queen who shrug off the indignities of their would-be lords.