Stagestruck: Upstarts – A brand-new theater and a newly minted king 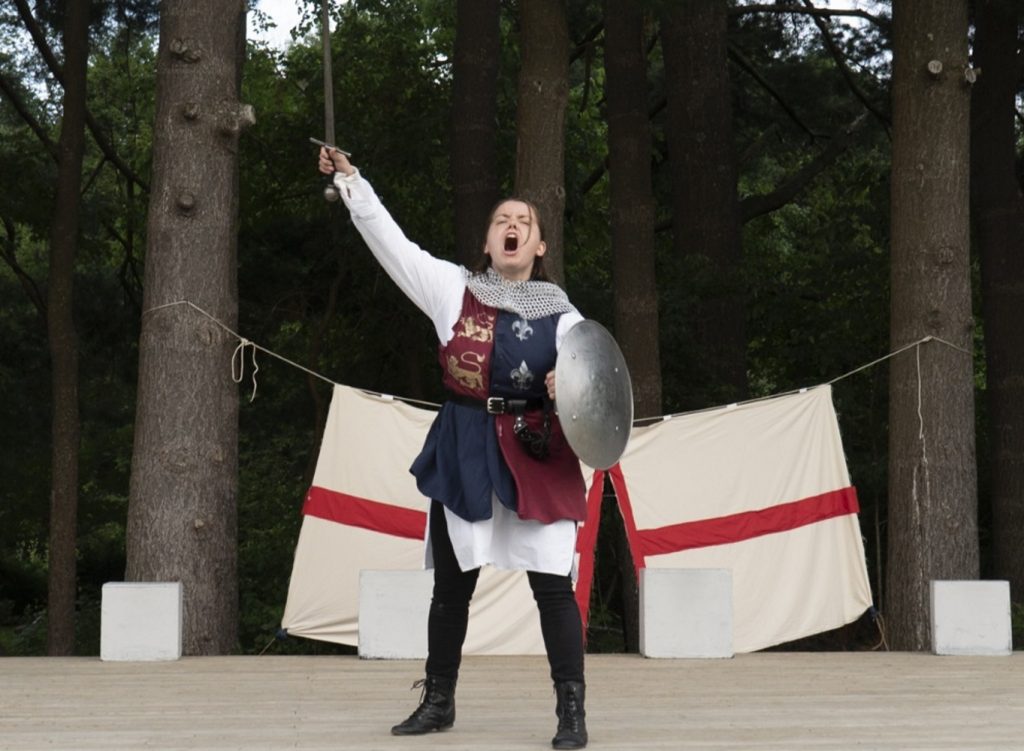 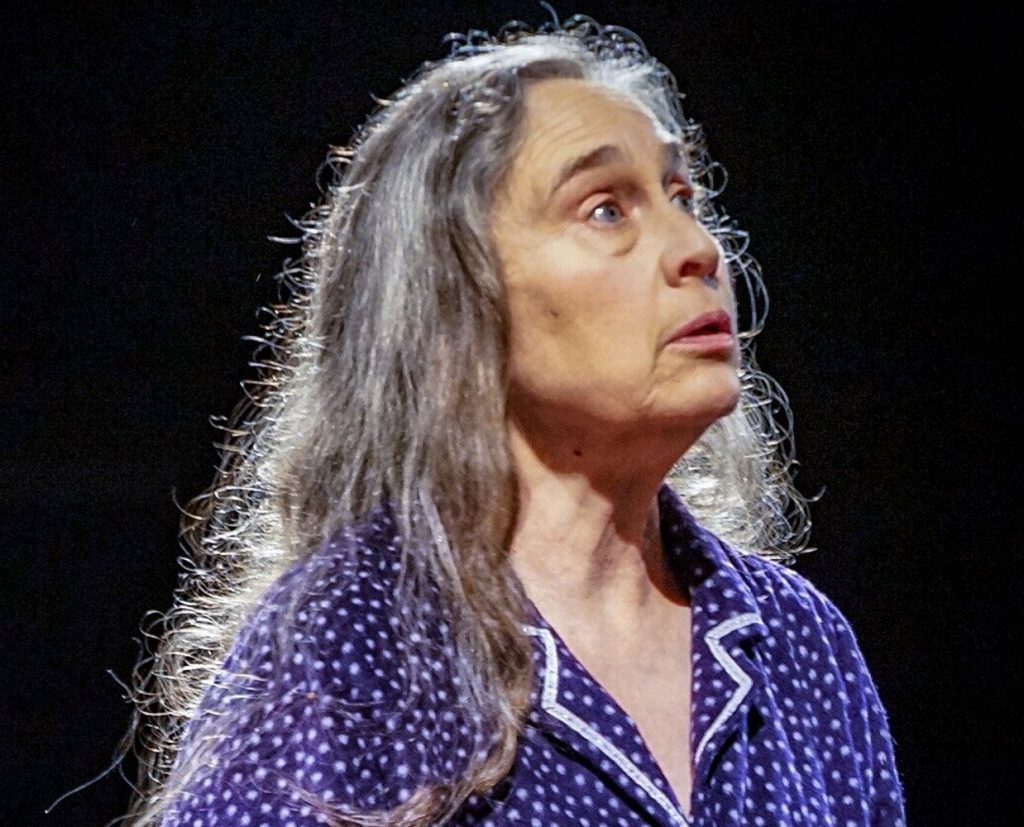 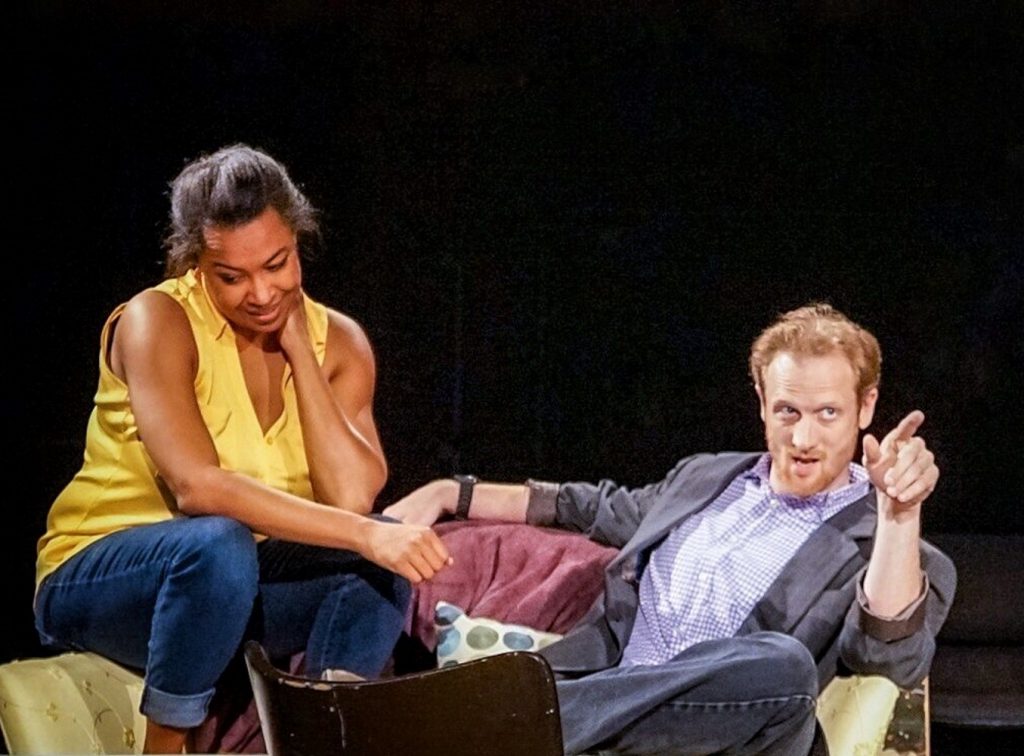 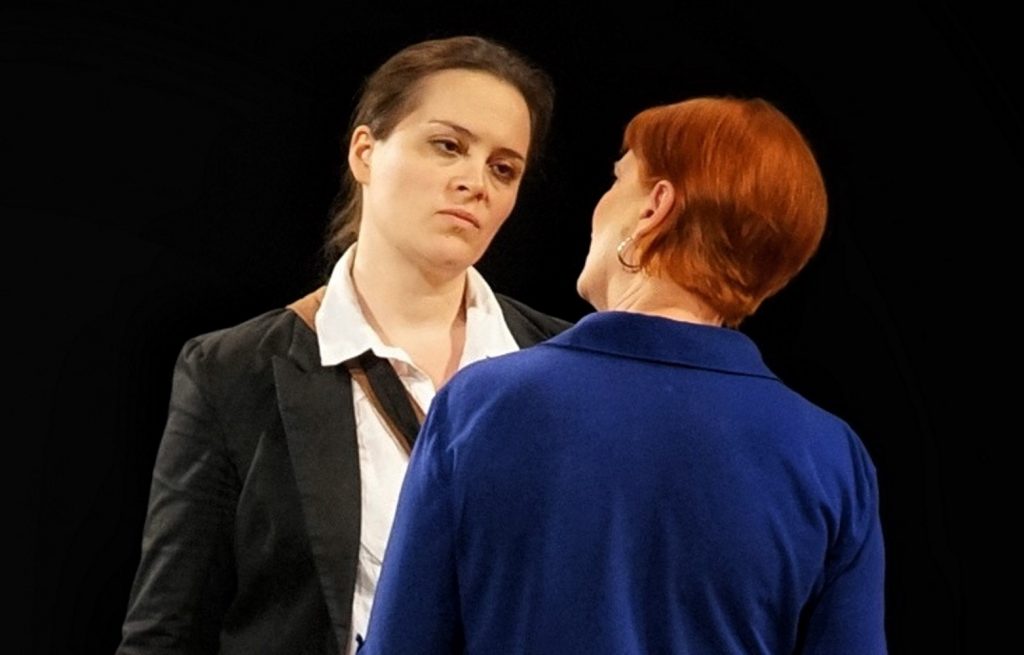 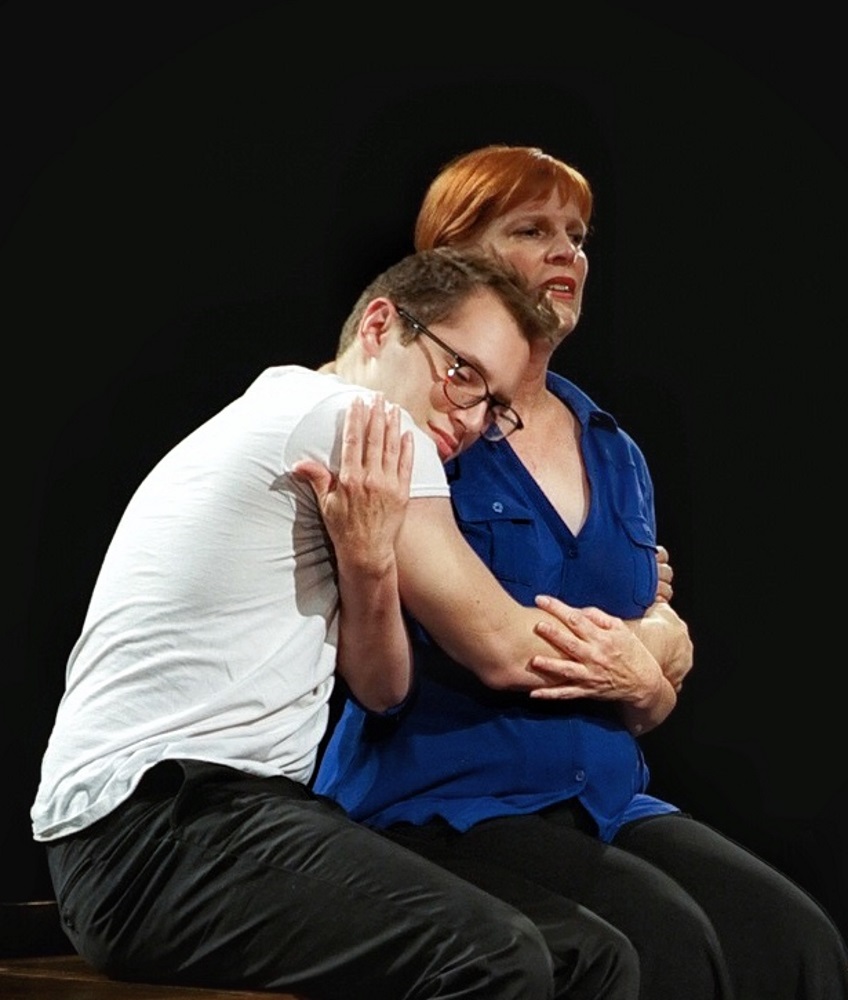 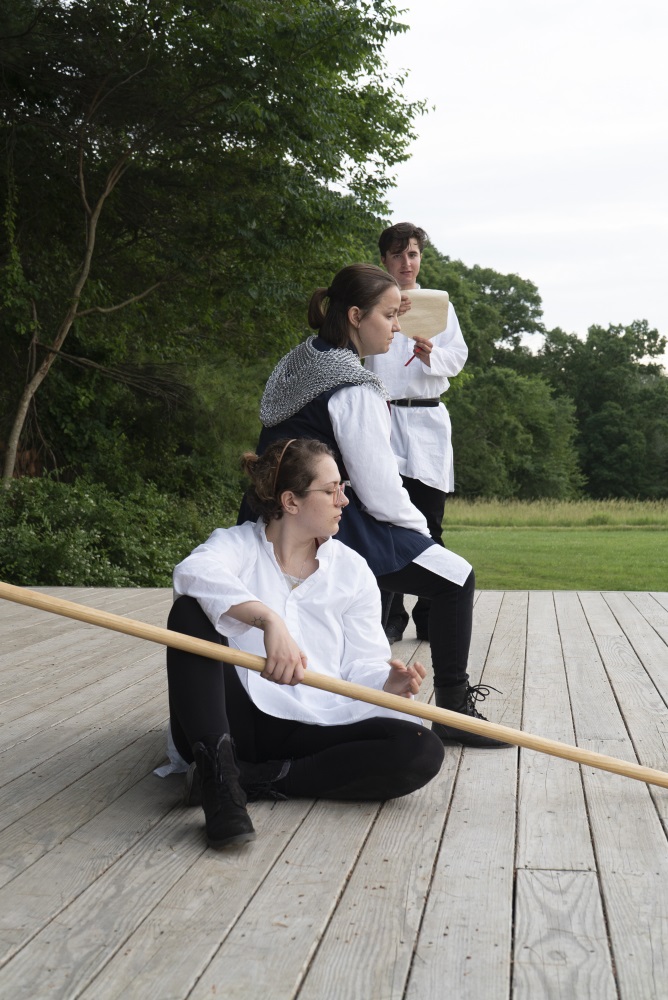 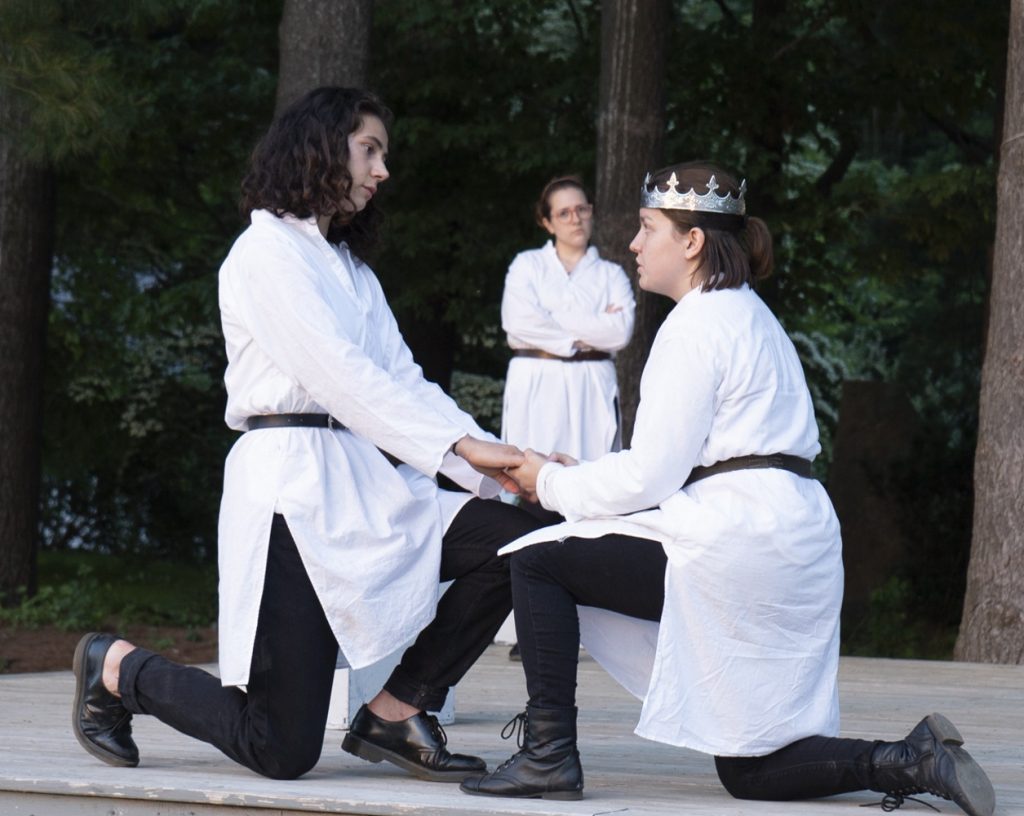 Last weekend, Strident Theatre strode confidently onto the Valley stage. The brand-new company debuted at Smith College with The Final Say, a dramedy by local playwright Meryl Cohn. According to founder Susanna Apgar, who co-directs the show with Shakespeare & Company’s Jonathan Epstein, the troupe’s “pretty sassy name” signals a dedication to arts activism and feminist/queer themes “as a driving ethos” within an ultimate goal “just to put on beautiful shows.” 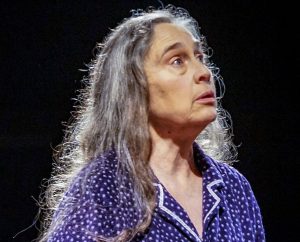 The Final Say, playing through next weekend, is pretty sassy itself. Like many of Cohn’s plays, it wraps a serious issue around quirky characters in comic situations. Here the issue is intellectual property, and more important, moral ownership — who owns the rights to a person’s story? — and it’s played out as a backstage comedy with heart.

Naomi (Apgar) has written a play based her beloved grandmother’s heroic stories of saving hundreds of Jewish children during the Holocaust. It’s in rehearsal at an Off-Broadway theater when it’s suddenly pulled in favor of a musical comedy, Holocaust Superstar — which bears an uncanny resemblance to Naomi’s play, down to a key detail. 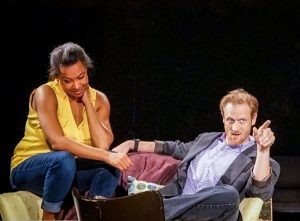 The theater world is represented by the musical’s author, Jenna (Marty Bongfeldt), a writing teacher and self-styled “mentor” who once saw Naomi’s early drafts; the director, Phil (R. Steve Pierce), disingenuous and narcissistic; his assistant, Martha (Kyle Boatwright), whip-smart and sympatico; and bit-player Martin (Christopher Rojas), a bundle of ailments and insecurities. There’s also Hannah (Jeannine Haas), a creaky but astute octogenarian, who was a close friend of Naomi’s grandmother and now gives the young woman tea, sympathy and unsentimental advice. 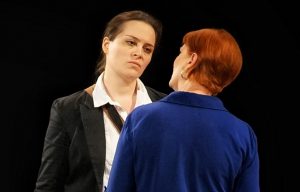 Jenna insists her song-and-dance musical is purely original and by the way, “nothing like The Producers.” But it is, as attested by a couple of its songs (written by Susan Goldberg and Billy Hough). A sample lyric: “I walked to Treblinka with a rock in my shoe / Hitler was farshtinkiner but I knew just what to do.”

When confronted with her apparent plagiarism, Jenna glibly explains that “You can’t copyright an idea,” and insists that all ideas come from a common well of experience: “We all drink from the same trough.” Which is true enough, but dodges Naomi’s accusation. In the end, the question of who owns the story has two answers, one dramatically unsatisfying, the other a surprise bombshell. 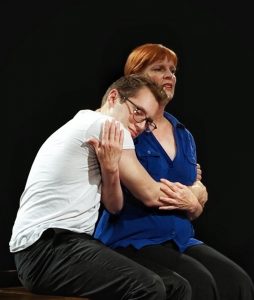 Winding through Naomi’s quest to preserve her rights and her grandmother’s legacy are several other plot threads, some of which add to the play’s depth and texture while others feel like detours. They include two romantic pairings, one straight and doubtful, the other gay and hopeful.

The set, circled by in-the-round seating, represents three locations — the theater, Martha’s funky apartment and Hannah’s retirement-home room. Both the settings and the scenes overlap, sharing some furniture and dissolving into each other, tracked by Ezekiel Baskin’s subtle lighting. The co-directors keep the energy and emotions high, and the performances are terrific — a well-matched ensemble clearly enjoying each other’s presence onstage, and their new company’s welcome presence in Valley scene.

Hampshire Shakespeare Company’s outdoor venue at the Renaissance Center in Amherst seems the perfect setting for Henry V, whose Chorus apologizes for the “unworthy scaffold” on which the epic war story is about to unfold. The bare platform stage, set only with six multipurpose stage blocks, is different in scale but not essentially distinct from the one at Shakespeare’s Globe. 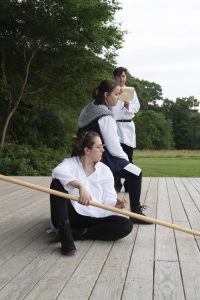 Noah Tuleja’s appropriately bare-bones production likewise echoes Shakespeare’s own multitasking company. Five actors in plain white tunics, four women and one man, portray over two dozen (mostly male) characters and share the Chorus speeches contrapuntally. They are Phoebe Blaisdell, Abby Carroll, Dale Leonheart, Tyler Nowadowski and Kait Thomas — a young company, college students and recent grads, with immature voices and unseasoned talents, but they attack their roles with vigor and sincerity. In the title role is Carroll, who is the smallest person on stage but compensates with an intense, almost truculent Henry, the newly minted king who leads his scanty “band of brothers” into battle and emerges a self-assured conqueror. 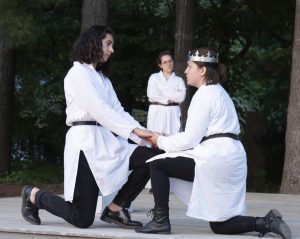 Tuleja, a theater professor at Mount Holyoke College, has cut the script to 80 minutes, a practical move but an odd abridgment. He has deleted great swaths of the text while leaving whole scenes and long speeches virtually intact. Gone are all the comic-relief characters, including Falstaff’s old tavern-mates who follow their former drinking buddy, now their king, into France. To me, this choice deprives the play of much of its humanity and diminishes its impact.

The staging is impressive, a hurly-burly of “imaginary puissance,” as the Chorus puts it. The only props are long wooden staves that create percussive effects, form a Channel-crossing ship and charging war horses, and are wielded in hand-to-hand combat, giving way to steel swords in the climactic battle.

July 3-7 at the Renaissance Center, 650 East Pleasant St, Amherst (at Hampshire College in the event of rain). hampshireshakespeare.com.