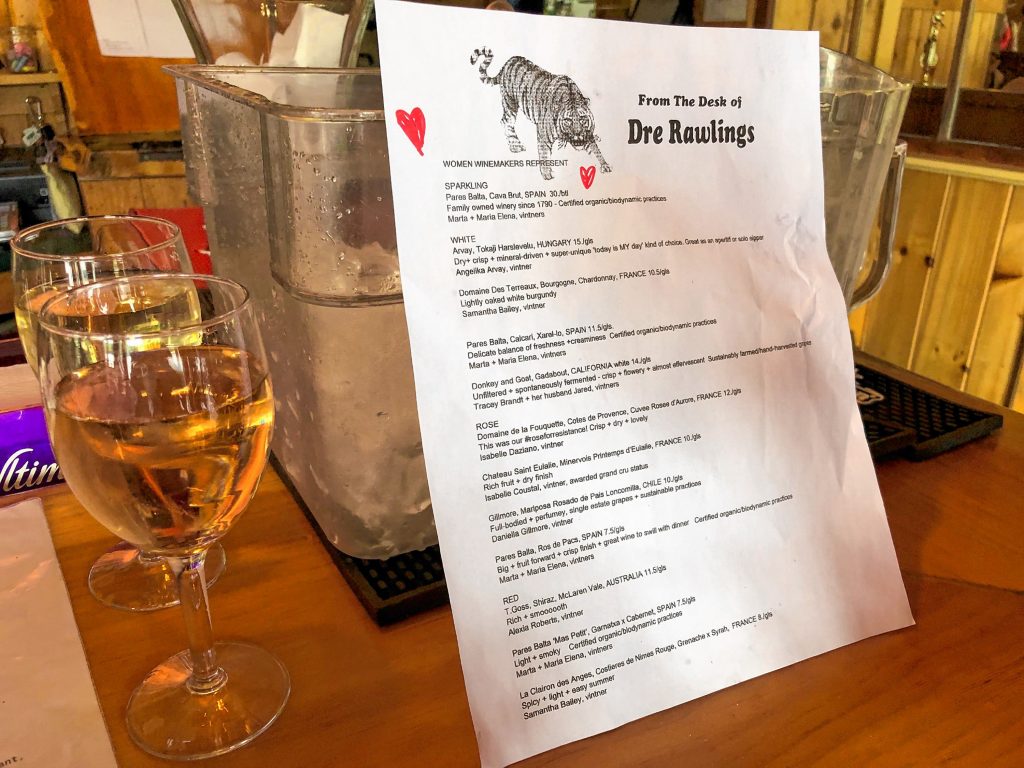 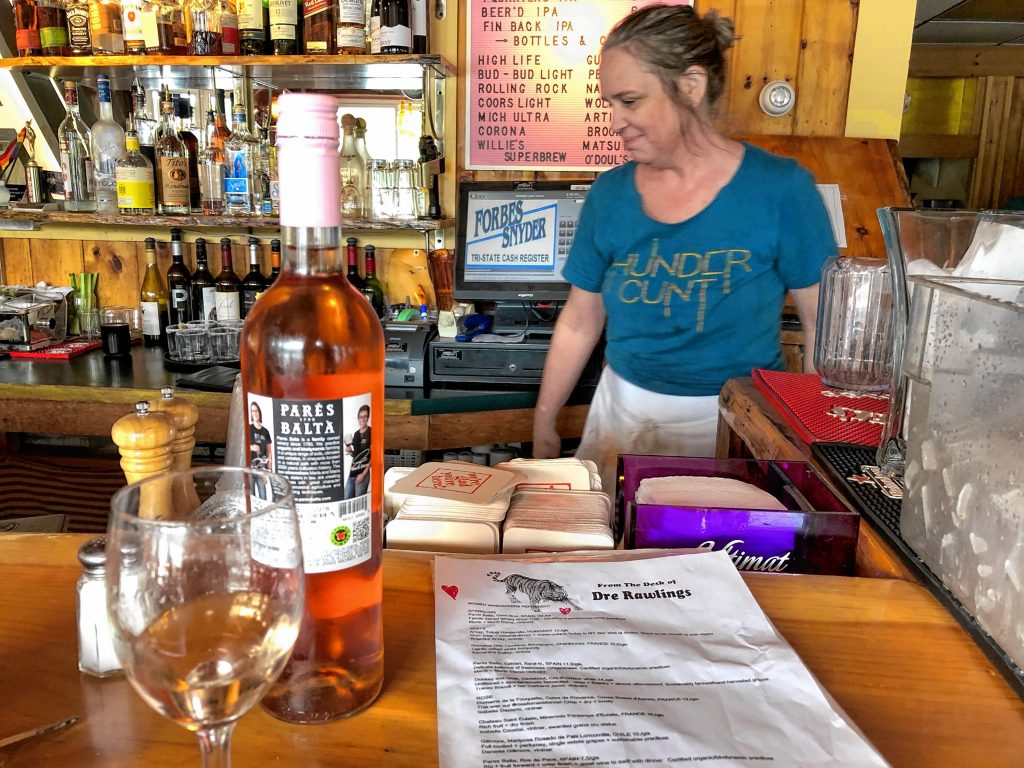 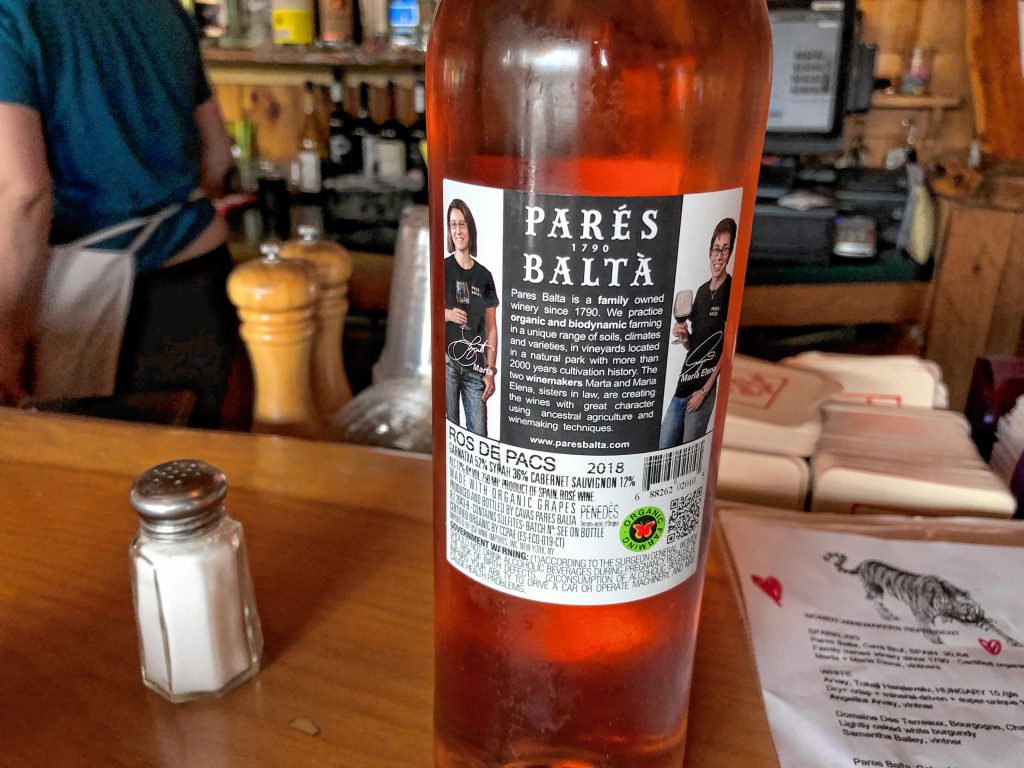 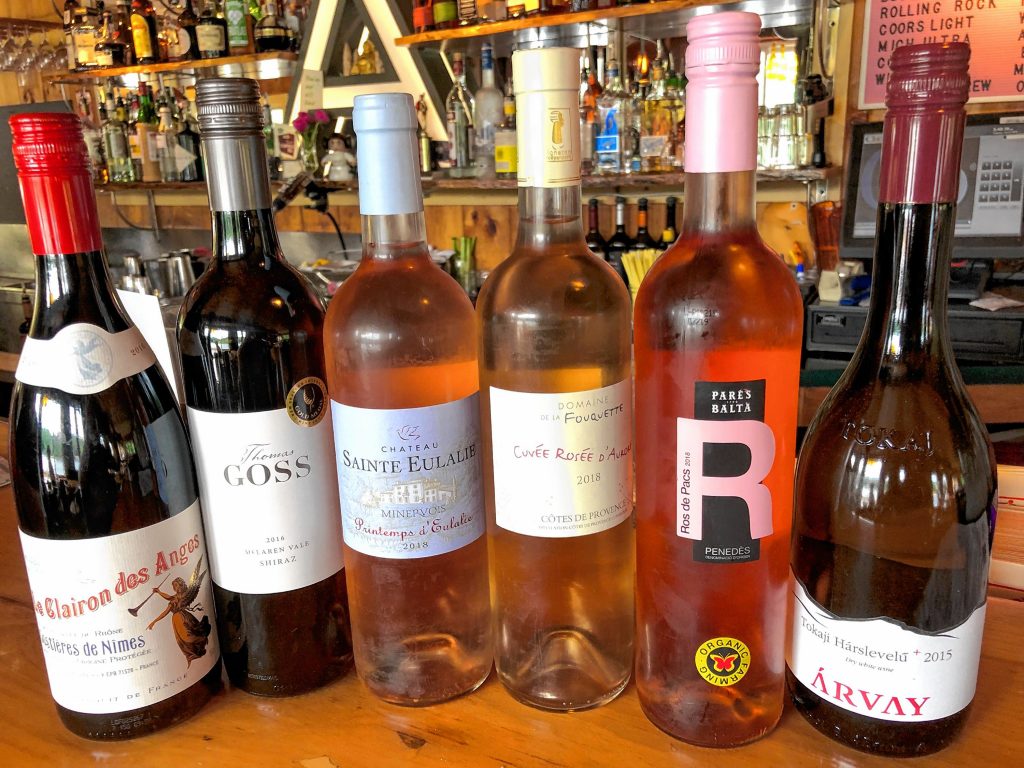 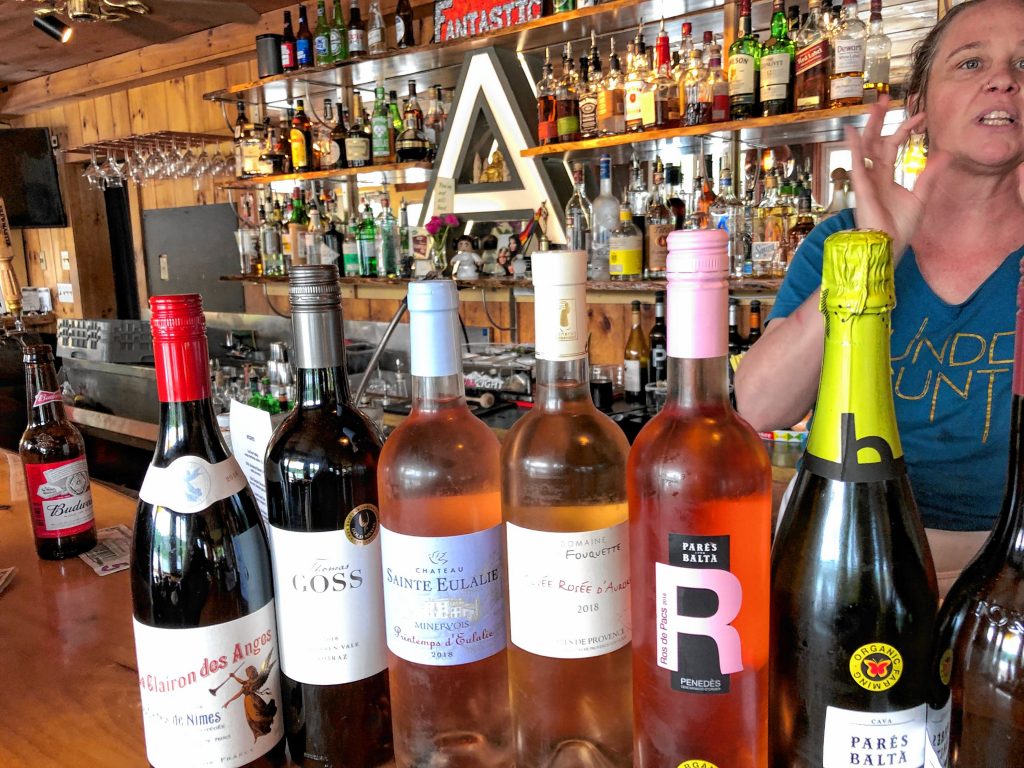 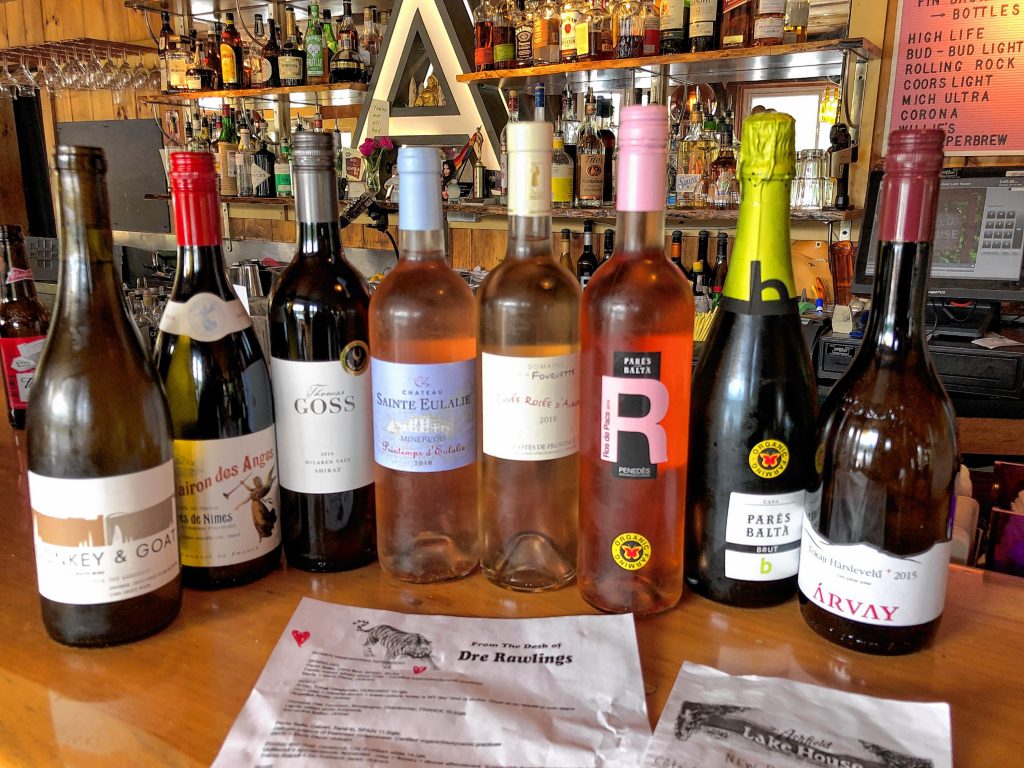 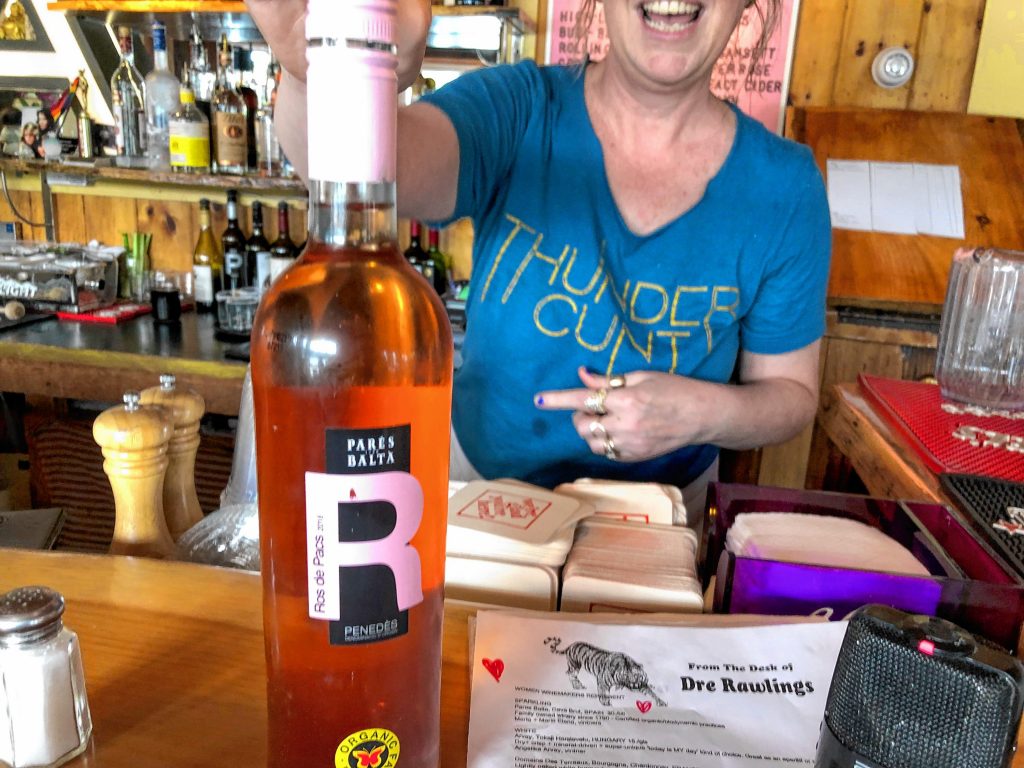 Her shirt read “Thunder Cunt” as she sallied up to her bar at The Ashfield Lake House. She had the shirt printed because she says it is her “lifestyle brand.” Dre Rawlings is a nasty woman, in the best most badass way. In the way that would piss off the Commander-in Chief, who I’m sure would love to call her what it says on her shirt, but wouldn’t dare. Dre has been the chef/owner of this iconic Ashfield townie hub since 2015. And in that time, she has managed to merge high art, parochialism, patriarchy smashing, and queer culture somehow seemlessly. And right now, she has a wine list made up of wines from only female winemakers. 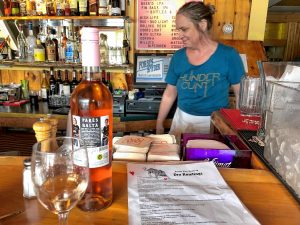 Unsurprisingly, the wine world has historically been and still is dominated by men. Although as of late women have been smashing the glass ceiling… or bottle, as it were. When I asked Dre if it was women just being involved in the winemaking process or women leading that process that she was interested in, Dre replied, “vintner, vintner, vintner — that’s what I’m looking for.” I’m not going to judge you if you don’t know that word: vintner. It means a person who makes wine. What gave Dre the idea to do an all-female vintner list?

“Dirt Candy, I’ll start there. I took my family to Dirt Candy, a vegan restaurant in New York. And they have a wine list that is all women. I was like, ‘wait, the whole wine list is women?’ Then I found out that the wine list was developed for Dirt Candy by a woman named Lauren Friel.”

Lauren Friel runs Rebel, Rebel which is described on their website as “a no-rules natural wine bar in Somerville’s Bow Market.” Except they definitely have rules. Their site also says “Leave your misogyny, your homophobia, your racism, your classism, your ableism, your patriarchy, your gender bias, and all your other bullshit at the door, ‘cause that shit will get you kicked out real quick.” Good rules. Dre says, “I went to Rebel Rebel and I’m like ‘oh my gawwwwwwwd!’” It’s hard to convey Dre’s dynamo level of energy in print.

Not only did Friel inspire Dre to create an all female wine list but Friel was the force behind Rosé For Resistance back in May, where patrons at nearly a dozen Boston bars could purchase a glass of rosé and support The Yellowhammer Fund, which provides funds for anyone seeking an abortion in one of Alabama’s three remaining clinics. It was all Boston-area bars who signed on. One bar in Virginia. And the Ashfield Lake House. Dre’s rosés were all donated by Benson Hyde at Provisions in Northampton. The Lake House sent almost $1,500 to the Yellowhammer Fund. 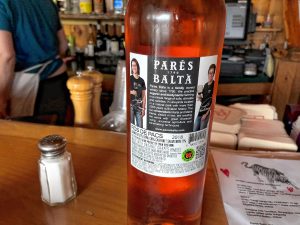 And now Dre has taken another step in Friel’s direction creating an all-women wine list. What woman wines would Dre want? She says, “Since we opened, I’ve had Parés Baltà on the list. The winery is in Spain. The winemakers are women. They’re sisters-in-law. The wine is produced organically and biodynamically. So their wine is super clean and sustainable.” And luckily, pretty affordable. You can get a glass for $7.50. The winemakers have placed their pictures on the back of the bottle. Which Dre says is significant. “I think it’s really important to be proud of your product and also represent yourself and I think a lot of times women are in the background and I love supporting their winery for that reason.” 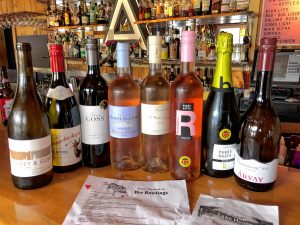 For the rest of the wines on the list, Dre leaned on a local wine representative, whom I’ve sparred with over Pinot Grigio in this very column, Chris Gazzara from Charles River Wines. She says, “I tasked Chris with finding me natural wines, made sustainably and made by women winemakers.” Natural wines can be an acquired taste. “I like real dank, weird shit. I will go a lot deeper and darker than most people in Ashfield will on a regular basis.” For an entree into that dank world, Chris suggested some wines, that I have also written about previously, from a couple in Silicon Valley — Jared and Tracy Brandt’s Donkey and Goat. Both Jared and Tracy have put their individual stamp on specific wines. Dre chose Tracy’s Gadabout, a spontaneously-fermented, Chardonnay-heavy white.

At the Lake House, I tried the Domaine de la Fouquette rosé created by Isabel Daziano in Provence. It was crisp with just enough fruit and also happened to be included in Friel’s Rosé for Resistance. I also had a glass of the Domaine Des Terreaux, a white Burgundy made by Samantha Bailey. It was beautifully tart and on the very green end of green apple. I love French wines and it’s great that these women winemakers are slowly crushing the patriarchy like so many grapes, especially in a particularly traditional winemaking region.

“I’m interested in quality,” Dre says, “The bottom line is: if I’m going to be buying very nice quality wines, I’m absolutely going to choose from women first. Because I believe — and especially in this business — women have not been given the respect they deserve. I feel like if you’re gonna believe in something, I believe in women.” And Dre’s commitment extends beyond just the wine list. “I have an ungendered bathroom that says ‘restroom.’ It’s single use. It has a lock. It has a baby changing station. I also have a restroom that says ‘all-women.’ If you identify as a woman that is also your bathroom.” Why not just make both bathrooms ungendered? Dre says, “I have to think about safety. The way some of the shit rolls around here. What I have dealt with, with overt and aggressive and hostile racism and homophobia in this restaurant, I have to be careful. If I’m advertising this as a safe space then you should be able to use a restroom and feel comfortable.” 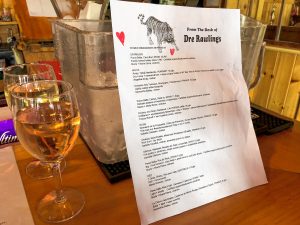 Many wine writers still describe certain wines as “feminine.” The all-female vinted wines on the Lake House list are all literally feminine. But all 12 of those wines are so vastly different from one another. Some are bold, some funky, some flowery, some smoky, some smooth, some creamy, some steely. You know, feminine. And while Dre has undoubtedly created a feminist space, she has simultaneously created an inclusive space. “It’s like a double major: inclusivity and feminism,” Dre says, “It’s queer beach day everyday.” And it certainly was the day I went. The beautiful rainbow of humanity on the Lake House’s amazing beach that day was a wonder to behold. I wondered what the people on the town beach on the other side of the lake think about just how queer it gets across the water. But Dre makes no apologies for how queer or how feminist the Lake House is. See earlier reference to the lifestyle brand on her T-shirt. “We need opportunities for women to have a place,” Dre says. “Eat it or choke on it.”