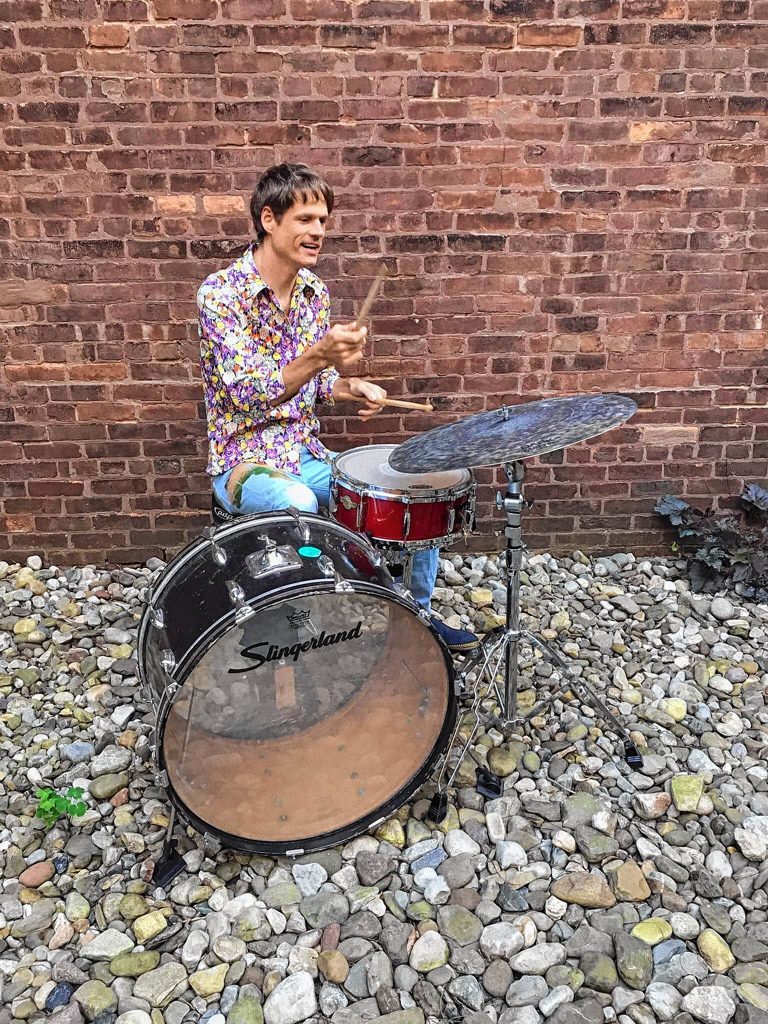 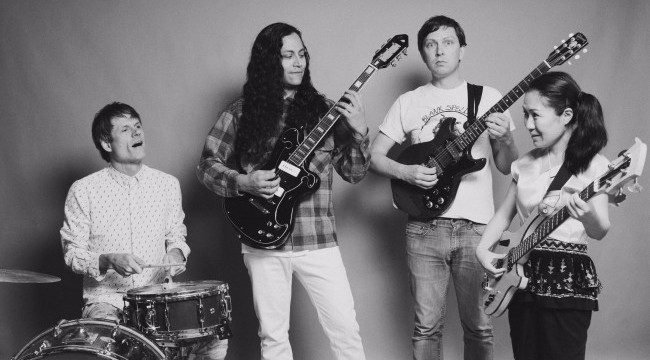 Deerhoof has been making topsy-turvy, explosive rock music for over 25 years. Founded in the ‘90s, the group is still at it. They have released 15 albums, collaborated with countless musicians, and have inspired many more (myself included). The band will play Hawks & Reed Performing Arts Center on July 11 with Carinae, Tundrastomper, Hot Dirt, and Blank Spell, warming Greenfield up for the annual Green River Festival. I spoke with founding member and legendary drummer Greg Saunier from my porch. — WM

Will Meyer: I wanted to ask you about the DIY aspect of your band. How do you guys manage it? How you guys sort of manage the [lowers voice to invoke conspiratorial tone] hostile industry, man?

Greg Saunier: Not having any managers, handlers, and reducing the sort of middle entities down to a minimum actually reduces the hostility because — I think that managers feel comfortable talking to other managers in a very litigious and adversarial way because that’s what’s on their job description. For instance, if it’s a negotiation over a fee, one side always wants more and one side always wants to pay less. Because if either one didn’t do that, they’d be instantly fired. However, we like, wherever possible, to do things our own way. Oftentimes that just comes down to producing our own records. That’s not unusual in this day and age because nobody has a budget. And it’s fun — [reconsidering] I don’t know. I guess not all of it is super fun. John [guitar] does almost all of the driving. And like, you know, Satomi books the rental cars. Ed [guitar] finds us hotels. And a lot of that is just a big pain.

W: Your songs are funny but they’re also sad. And there’s a playfulness in your music that I think is an antidote, but it also cuts the sadness in a good way. Tell us how you mix the playfulness and the sadness and the humor all together at once. I mean “there are too many choices to order breakfast / thank you for coming, get out now,” right?

G: It’s more than even just sadness and humor. It’s also a feeling of numbness, a feeling of anger, a feeling of intellectualism, a feeling of peace, a feeling of, I don’t know, triumph, or heroism. All I’m doing is listing human emotions. There is a thing of — the song you just quoted, which is Exit Only, I made up the guitar part in an effort to sound — I don’t know mood it expresses, but maybe you could say anger. But Satomi made up words, and none of us could anticipate what lyrics she was going to write, but when she did they provided a kind of humorous counterpoint to the anger in the music. It’s a way that we collaborate. I think we argue against ourselves, let’s say. The way that members of the band balance each other is that we fight each other in a way. And if you feel that a song is too limited in its emotional scope than somebody tries to find a way of instilling a complimentary emotion, the opposite emotion to go along with it.

W: This question is from [my bandmate] Brian. He wants to know specifically about an anti-fascist ethos or responsibility in your music, and how does one “spite survive” this shit?

G: It’s a hard one. Being opposed to fascism is something that any musician could do simply with slogans, and that would be nice. But maybe a harder thing to do sometimes — I don’t know if it’s harder — but a thing that is less commonly talked about is when musicians try to discover what are the fascist leaning elements of their own music. I’m not talking just about the lyrical stance. I’m talking about the musical stance. For instance, the idea of total synchronization is one that Deerhoof thinks about a lot. One of the most common features of pop music is a really regular beat. And everyone in the band or the act rigidly conforming to that unchanging beat. I’m not saying that everyone who does that is necessarily a fascist, but I am saying that we derive some amount of fun by constantly making that pulse a problem in our music, we’re always fighting against it, and rhymically fighting against each other. And being flexible at times or not conforming to a rhythm that someone else in the band might be playing, we’re listening to it and we love hearing each other really clearly on stage. But we don’t always consent to lock in with everyone else. And just the idea of like non conformity, it doesn’t have to be rhythm it could be about any aspect of songwriting, you know. We seem to actually take pleasure of finding those ways that we have lost — we’re in danger of losing some sense of joy and becoming tyrannical about, or lazy, about some musical parameter, and then trying to freshen it up by rethinking it or playing with it or being silly with it in a way that doesn’t fall prey to unspoken or unwritten musical laws that everyone is expected to follow. It’s fun to look for those things, and then refuse to follow them.

W: My last question is where do you get your pants and what should young bands wear? 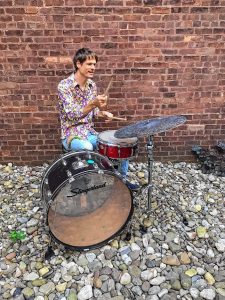 G: Where do I get pants? [laughs] I get my pants — I get [them] when I have time. We rarely have as much time on tour as any of us would like for thrift shopping because we are always late and we are always pulling into a city just as rush hour is getting started. But [my pants are] from the women’s section of a thrift store. A sad fact about gender-based fashion oppression is that is that men’s pants rarely have any like flowers on them or bright colors. You just have to go to the women’s section, it’s fine.

But what should young bands wear? This one I feel, out of all of the questions you’ve asked today, I think this is the one closest to my heart and the one I think is most important, and if the reader wants to take any one thing away from this interview, it would be this: young bands should wear whatever they want to.