The Beerhunter: The Proof is in the Pilsner 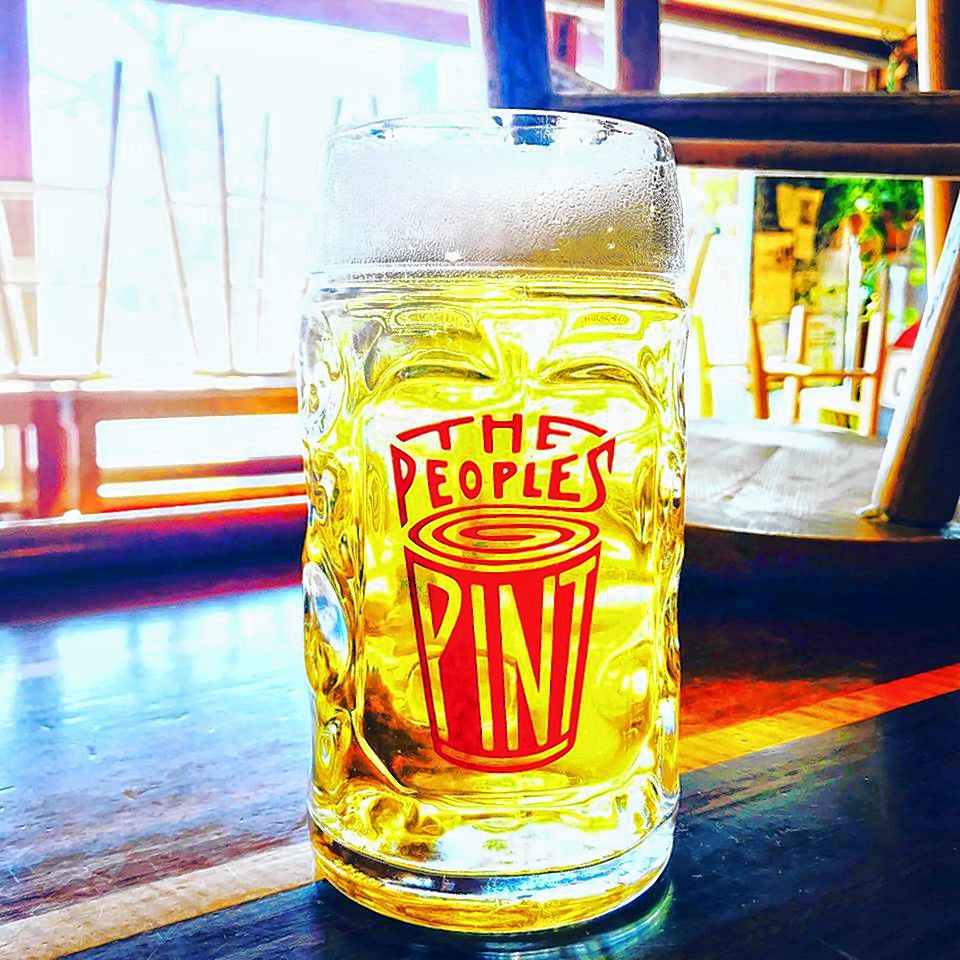 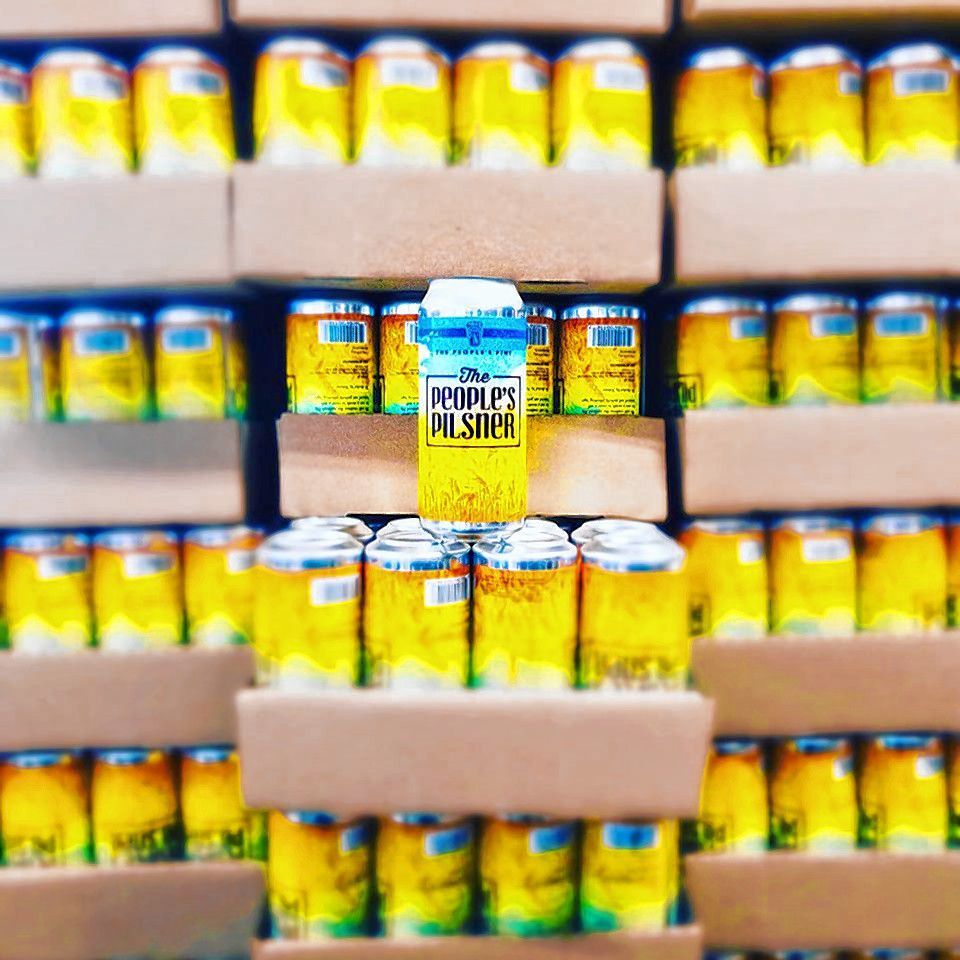 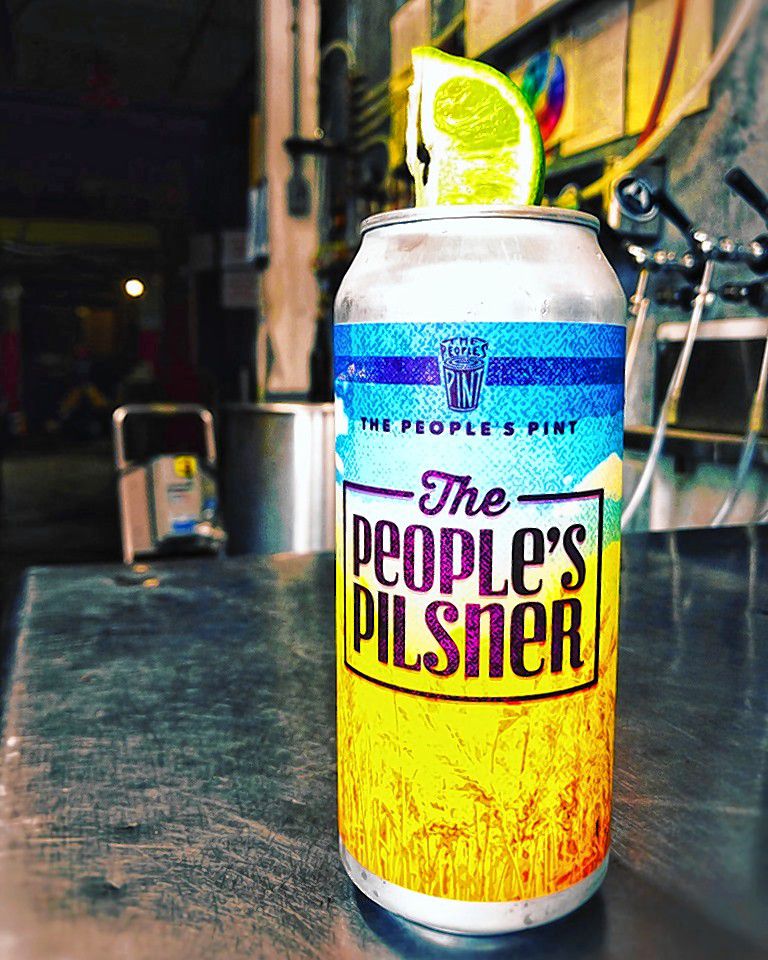 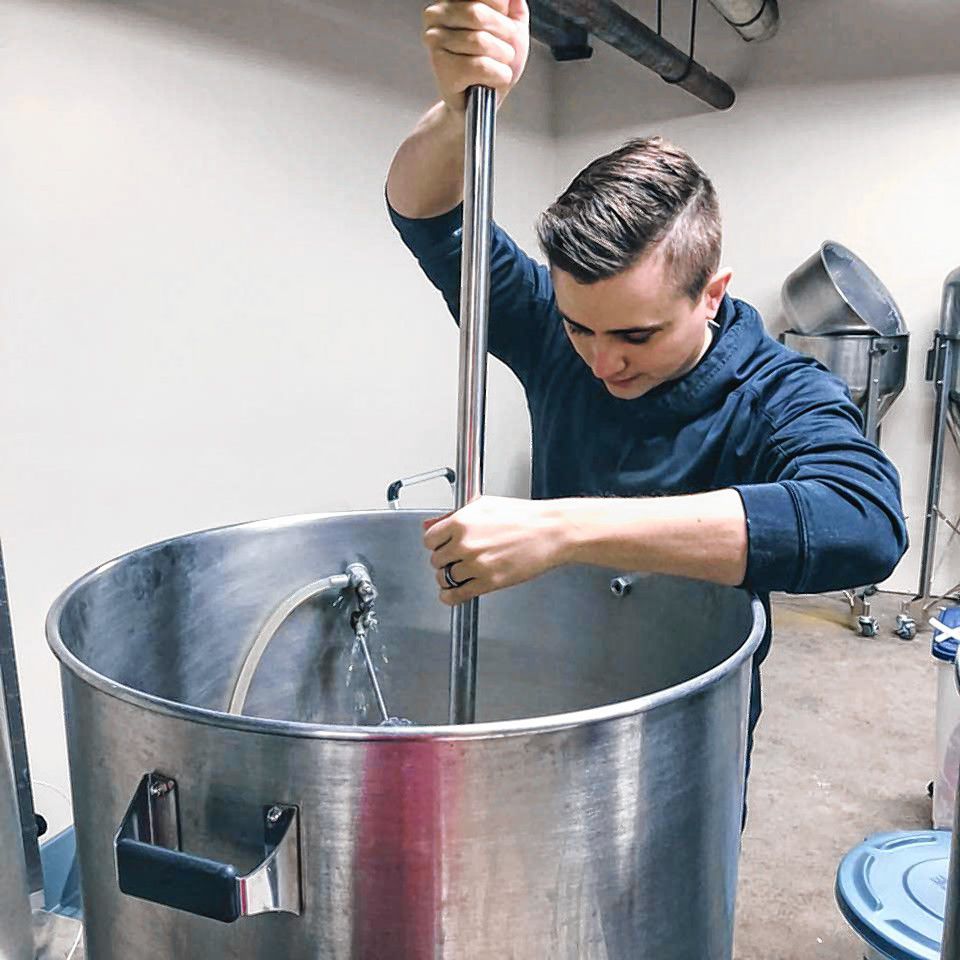 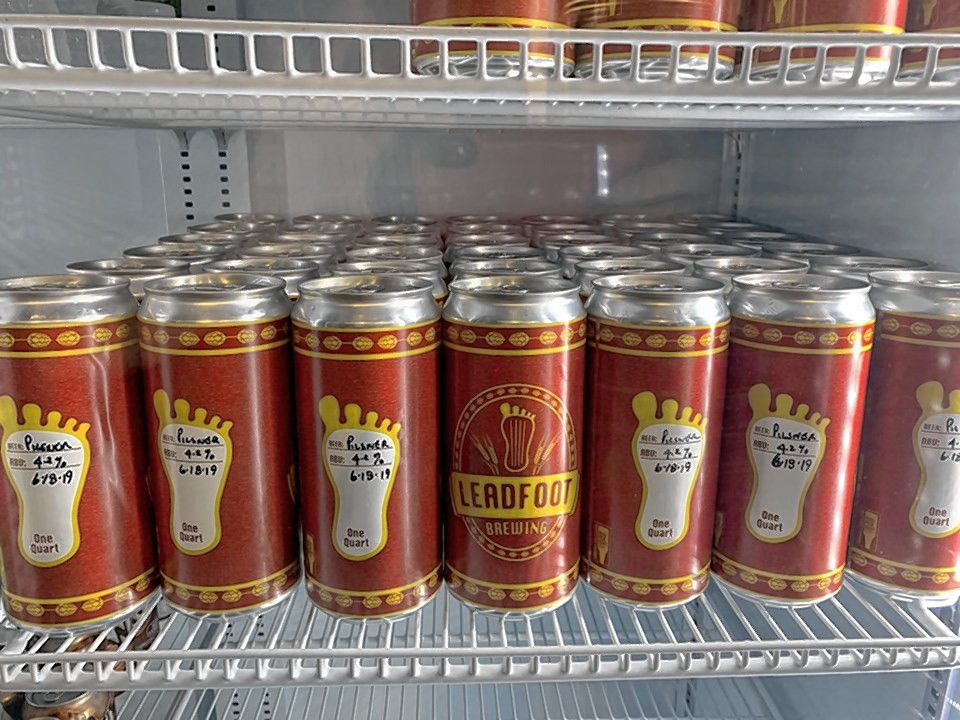 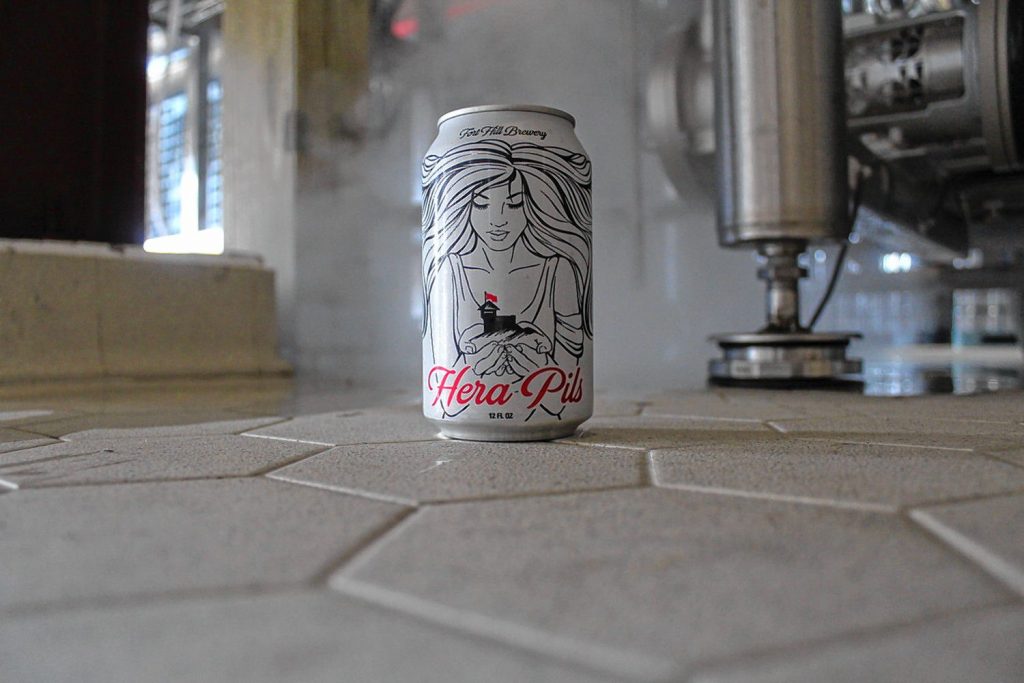 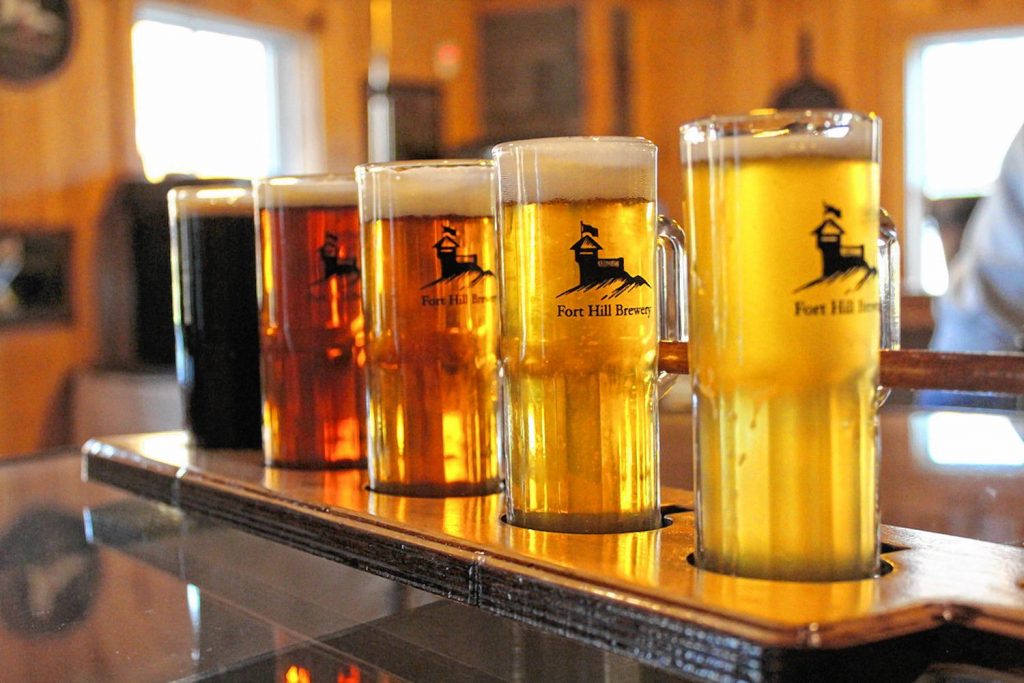 Every now and then, a four-word notification pops up on the homescreen of my phone. It says: “batch from the patch.” That’s my calendar, reminding me to hop over to Turners Falls — specifically, the 11th Street bridge to the Patch neighborhood — and purchase a batch of whatever Lawrence George has on tap at Brick and Feather Brewery.

For a long time, my go-to refill was George’s hazy IPA called In Absentia. It’s a quintessential New England IPA from an adventurous brewer who also appreciates restraint. It’s largely thanks to In Absentia’s lush, juicy, well-balanced taste that Brick and Feather made the Boston Globe’s list of top-rated breweries in the state last year, based on consumer feedback from BeerAdvocate.

The pilsner is called Transferable Skillsets, and I think the name fits. This is the moment that we watch a local maestro of complex ales and tropical hops turn his attention to a style of lager that often tastes, at least in the American mass market, more or less like a Miller Lite.

Classic German and Czech varieties of pilsner were developed less than 200 years ago, but their influence grew quickly, as light lagers became the most popular beers by volume around the world (Budweiser is, effectively, an American imitation of the iconic Czech lager Pilsner Urquell).

On the small scale, ales are easier and less expensive to make than the technically precise and time consuming process of lagering. Although more craft brewers these days are leaning into lagers, styles like pilsner still feel a bit stranded in the corporate beer-osphere. Pilsner is “the most widely imitated beer style on Earth,” wrote Jim Vorel in Paste magazine a few years ago, “and yet has at times in U.S. history been bastardized almost beyond recognition. It’s a style with a love/hate relationship within craft beer itself.”

But when I asked George why pilsner appeals to him, his answer was simple: it’s pretty much the perfect beer. “As a drinker, there is no beer style more satisfying to me,” George told me. “It is flavorful and quenching all at the same time. It is simple yet can be incredibly complex. It fits any occasion and any food.”

“It is the absolute expression of just four very basic ingredients,” he added, referring to water, malt, hops, and yeast. “Even a proper lager fermentation, contrary to the idea that it should be simply ‘clean,’ can produce wonderful layers of flavor, if one is inclined to look for them.”

Sean Nolan, one of the brewers at the nearby Honest Weight Artisan Beer in Orange, is of the same mind. “Pilsner showcases simplicity, elegance, and subtlety,” says Nolan, who makes a German-style pilsner called Prescott. “It’s a style that when done well is refreshing, succinct, and effortlessly enjoyable.” Nolan says that, compared with beers like New England IPAs and pastry stouts, moving pilsners in today’s craft beer market is “a bit of a struggle, but it’s worth it.”

A lot of local brewers seem to agree. The newly-opened Leadfoot Brewing in Chicopee has set up the pilsner to be one of its flagship beers. In Easthampton, New City Brewery makes one, and Fort Hill Brewery makes three. The People’s Pint in Greenfield has found a following for its pilsner. So have Amherst Brewing, Holyoke Craft Beer, and Two Weeks Notice Brewing Company in West Springfield. Local craft beer fans may also know Post Shift Pils, the pilsner made by Jack’s Abby in Framingham. 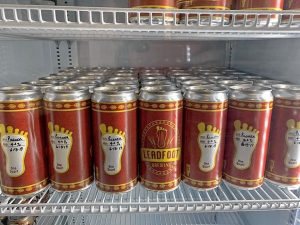 “Right now there is a tremendous amount of excitement for lagers in general, and more so for pilsner specifically,” George told me. When Brick and Feather released its pilsner a few weeks ago, it was one of the most well-attended events in the brewery’s four years of business. “We’re still getting people showing up at the brewery looking to try it,” George said.

I asked him why the craft beer pendulum is swinging back toward simpler styles. He thinks it’s because the quality of American craft lagers has quickly been increasing. “Twenty years ago, your average brewpub lager was kind of a mess,” he says. “Some bigger regional brewers started making better lagers seven or eight years ago. Then it seems like just in the past two years or so, some very talented brewers have turned their focus to lager brewing.”

The result in 2019, he says, is that “we have some truly authentic, world-class lagers available, whereas before we only had imported lagers, which sadly don’t fare well during long transit across the Atlantic.”

Rachel Rosenbloom, assistant brewer at Fort Hill Brewery, says she loves the pilsner style because it showcases the brewer’s technique. “There aren’t a ton of hops to cover any fermentation flaws,” she says. “It’s like ordering a cheese pizza when you check out a new pizza place, or the straight-up pad thai at a new Thai restaurant, to get an understanding of how good the place really is.” 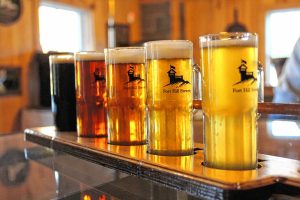 Rosenbloom agrees that the craft beer tide is turning, and that lagers are ascendant. Although many Fort Hill fans are hop heads, she says, “there are just as many people who don’t like hops at all, and it’s often hard for those people when they visit breweries because there often isn’t an option for them.”

Brewer Sam Dibble has observed something similar at New City Brewery, where his Millside Pils is “here to stay” in the taproom. Pilsners can act as a bridge, allowing craft brewers to bring in people who have been drinking Budweiser and Miller Lite. “Easthampton is still a blue collar town,” Dibble says, “and it’s been great to be able to offer people a full-flavored pils that will seem familiar to old-school light lager drinkers, and exciting to true fans of craft beer.”

“Any error will be more glaring with Pilsners than other beers,” he adds. “When brewers have the courage to take on such a challenging style, and then they get positive feedback — and maybe even a bunch of new customers that weren’t into IPAs or darker styles — then there’s no reason for them not to brew more and push the envelope.”

There is plenty of room to play within a seemingly simple beer style, says brewer Chris Sellers, who runs The People’s Pint brewery in Greenfield. “There are so many variations,” he says, “from beautifully malty traditional Czech Pilsners to the light minerality of Italian Style Pils. Some are more Keller style with a pleasant haze, and some are crystal clear. Super pale gold to borderline deep gold. It’s an amazing style.” 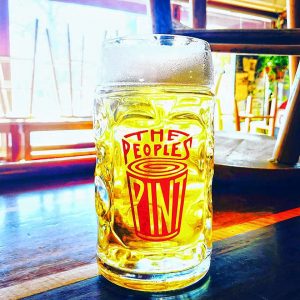 Sellers considers The People’s Pilsner one of his favorites to brew and to drink. “Pilsners take time, care, and a lot of patience, I think that really piques the interest of many brewers,” he says. “There is such an overwhelming variety of big hazy beers. I think some craft beer drinkers are ready for a change, and brewers are excited to brew pilsners for them.”

Brewer Mark Avery, who opened Two Weeks Notice Brewing Company less than a year ago, now makes a pilsner because, he says, “I wanted to challenge myself and see if I could brew a style where you can’t hide behind hops, and any mistake can be detected.”

Avery says that when he tried the first carbonated pint of his unfiltered PTO Pilsner, he had a smile from ear to ear. “It was one of the proudest moments in my short brewing career,” he says. “I think IPAs will always have a stronghold, especially in New England, but there is definitely a resurgence of good, flavorful, lower-ABV beers.”

Avery says his pilsner sold faster than any beer Two Weeks Notice has put on tap since it opened, including its biggest selling and best-known IPAs. “Since opening the taproom,” says Avery, “I can see the clientele that drink pilsners: middle to older-aged adults who most likely don’t dig hoppy beers, and younger adults who seek good pilsners and just want something different from hazy and hoppy beers.”

Another new brewery, Holyoke Craft Beer, also sold out its first batch of pilsner more quickly than expected. “The pilsner does take a while, since we have to add an extra month because of the lagering phase,” says owner Mike Pratt. “But it’s been one of the beers we’re most proud to brew.

”Pratt works with head brewer Adam Copeland, who values “approachable” beer styles but also wants to challenge himself to make pilsner that, Copeland says, “has some character, and doesn’t remind everyone of a Bud Light. From a brewing perspective, I’m most interested in how a pilsner can evolve into something unique, available locally.”

“Over the past few years, I think we’ve blown out our palates with big hazy IPAs that are thick and heavy,” Copeland says. “What people are interested in is restraint and simplicity, and a little history as well. I think people are becoming more educated beer drinkers. If you want to do that, you can’t leave out the lagers.”