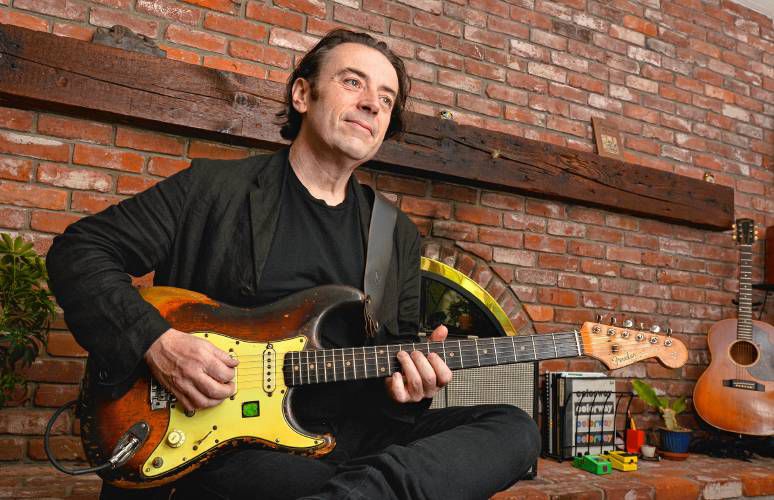 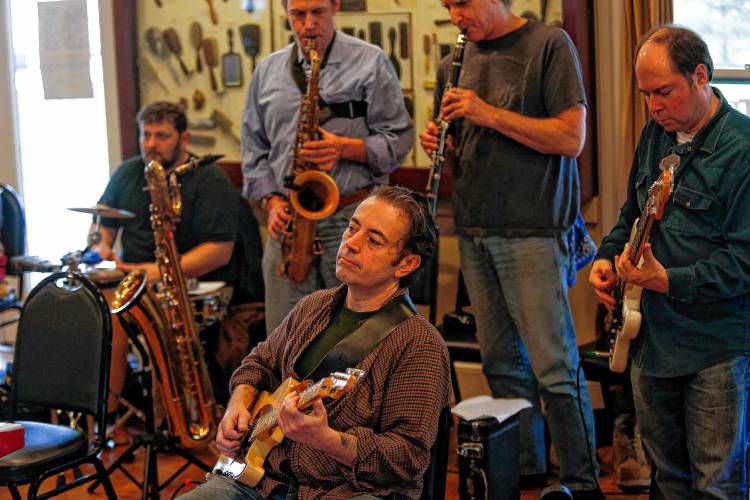 In October of 1991, guitarist and singer-songwriter F. Alex Johnson moved to the Pioneer Valley from Fall River to be part of the strong musical community. In the here and now, almost three decades later, Johnson is a mainstay in the Valley music scene. He’s played guitar for a diverse range of acts from 1990s rock band Drunk Stuntmen to the 70-year-old-plus chorus, Young@Heart, as well as frontman guitarist/vocalist and principal songwriter for power pop trio Colorway, which formed in 2013. 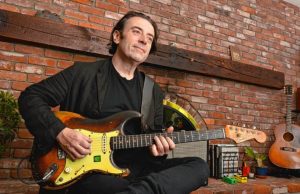 Throughout the past several decades, Johnson has called the Valley his home. But at the end of the month, he and his wife, Jodi, will be moving to Kyoto, Japan, for a year or more, where Jodi will teach English. The couple are saying goodbye to the Valley for now, but Johnson told the Valley Advocate, the Pioneer Valley and its rich musical community have made an impact on his life.

Chris Goudreau: First off, could you tell me how this opportunity and life change came about in terms of Jodi being offered a job teaching English in Kyoto, Japan?

F. Alex Johnson: Well, we were lucky enough to be able to go to Japan two times with Young@Heart Chorus. That was our first opportunity to get into the country. I don’t know if we’d ever have gone halfway around the world if it wasn’t for that. We went in 2010 and 2012 … And then we decided to go back for our honeymoon. We got married in July 2017, but we took our honeymoon the following spring to see the cherry blossoms. We went there for two weeks and in that two week time, I played some gigs, and kind of thought, “Okay, I’d like to be able to go here for a while and see what can happen. Now how can we do that?”

Chris: Many musicians in the Valley might say that you’ve built a legacy here, whether it was with Drunk Stuntman, being a part of Young@Heart Chorus, or with Colorway. What are your thoughts reflecting on almost 30 years of music for you here in the Valley?

Alex: I really feel like everything I did with all the bands and all the groups I’ve been in kinda led me to start a thing [an open mic every Wednesday at Brew Practitioners in Florence]. It’s kind of like a support group for musicians in a way, who rely on being able to come every week to play, to be together, and be a part of something special. I think the open mic is a greater magnification of the greater music scene in the Valley, which is one of the most supportive, most unique and invigorating music scenes that I can imagine being a part of. And I’ve traveled around the country a bunch with the Stuntmen and Young@Heart, and I’ve yet to see a place that feels as good to me where you can make music and you can bring it to a place. And if you do it enough times and if you get the press behind you, which I’m lucky enough to do, you can build something.

Chris: Do you have any concrete plans about gigs you want to play or even starting another band in Japan while you’re there?

Alex: Everything hinged on where Jodi’s job ended up being. We could have ended up in the far off reaches of a mountain village where gigging would have been a little more taxing. But we’ll be in north Kyoto. There are places to play music over there, but it doesn’t seem like there’s a lot of places like [Luthier’s Co-op in Easthampton] where if they like you, they throw money in a jar. It’s a bit more: you get a gig and sell tickets and make your money that way. 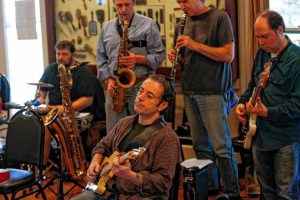 I’d love to be able to pick up some guitar students. I teach guitar here. I’d love to pick up students if that’s an option. It would be great to join something, but the language barrier is such a huge thing. Could you imagine having a band and saying, “we’re looking for a guitar player,” and some dude shows up and he can kinda communicate on maybe a 4-year-old level. He knows about 700 words and that’s about it. I’d love to join a band that’s already happening over there … I was in Portuguese wedding bands growing up in the south coast, so I have that going for me. I’ve been the only white dude in a band before. So, we’ll see. It would be great to join a band or start a band. But I’m just going there with a clean slate and a new pedal board … I’m just going there saying, “Hey, I play guitar.”

Chris: Best of luck and congrats again. We’re going to miss you here in the Valley.

Alex: I’m going to miss the Valley, too. Careful for what you wish for. I’ve been wanting to miss this place because I’ve never been gone long enough … I don’t really know what that’s going to feel like. I’m a whole lot more nervous about everything because it’s a huge undertaking. But I’m going to miss being able to roll into Luthier’s Co-op and see people I know and book a gig with as much ease as it takes to write an email. It’s going to be a different lifestyle and a big challenge. I have so much respect and admiration for my wife who has put so much work into getting this job and making this a thing that we can do. She’s the one with the college diploma. They don’t give visas to people without BAs for teaching over there. I’m lucky that she was able to apply for the job, get the job, and let me go. This is her job and I’m just going along for the ride hoping to pay some bills maybe with making music.

Brew Practitioners open mic, which was started by Johnson more than three years ago, will continue every Wednesday night hosted by Shawn Gundersen, a member of 1990s rock band yeP! Johnson will host his last open mic before Gundersen takes over the role on Wednesday, July 24, which will include a potluck gathering.

Colorway’s last show before Johnson moves to Japan will be on July 18 from 6:30 to 8 p.m. on the lawn of the Florence Civic Center (with a rain location at the Florence VFW) as part of the city’s Music on the Porch series.