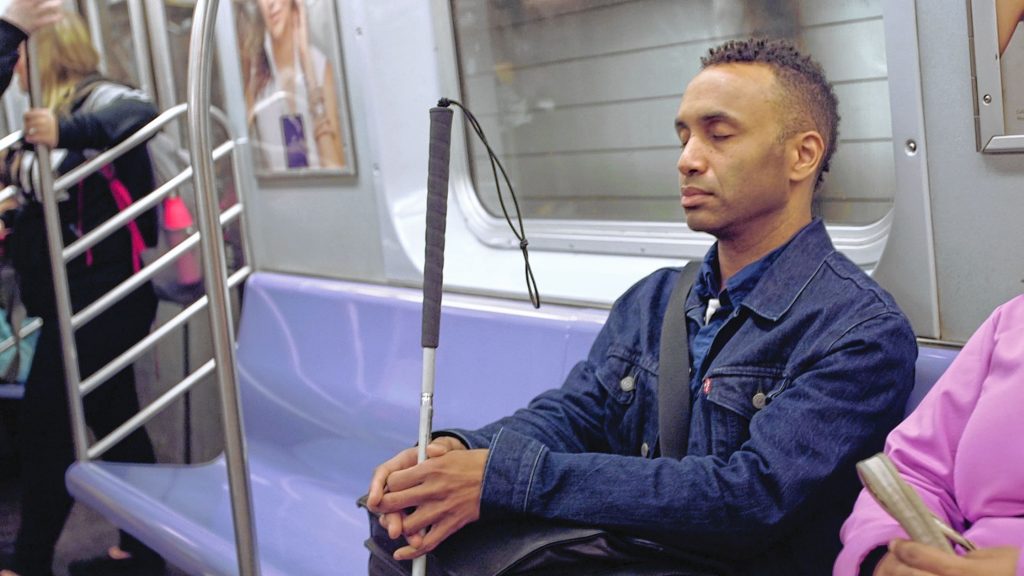 We often consider our visual artists in terms of their medium — a watercolorist, a sculptor, a portrait painter. But whatever their chosen tools, almost all artists share one thing that is so fundamental that we often overlook it: the gift of vision. And here I’m not writing of artistic vision — although having some certainly helps — but plain old everyday eyesight.

For decades, filmmaker Rodney Evans (Brother to Brother) worked in that visual world without worry. But a recent visit to an ophthalmologist left him shaken: Evans was diagnosed with a rare eye condition — retinitis pigmentosa — that would mean a gradual but consistent decline into blindness. What would such a condition mean for the filmmaker’s career?

Vision Portraits, a new film from Evans that screens Thursday night at Amherst Cinema, is the beginning of Evans’ ongoing reckoning with that new reality. Deeply personal but never navel-gazing, his documentary explores his loss of vision and the possibilities of his creative future not only by looking at his own situation, but at that of other artists who are blind or visually impaired in some way. The result is less melancholy and more celebratory: a richly visual work that considers new directions when traditional routes are closed off.

Included in Evans story are Manhattan photographer John Dugdale, who lost much of his sight to a stroke and HIV-related illness yet continues to produce ethereally beautiful work; and Kayla Hamilton, a Bronx-based dancer from East Texas whose chronic illness has left her with a loss of peripheral vision, difficulty seeing in low light, and double vision — on top of losing sight completely in one eye.

For Evans and his subjects, the pull to produce art means that their ability to see, even if cloudily, or not at all, remains only one part of their process. And in the end, to quote Dugdale, “the mind is the essence of your sight. It’s really the mind that sees.”

Vision Portraits comes to Amherst as part of the cinema’s Bellwether series, one devoted to giving voice to fresh approaches in filmmaking, and connecting those filmmakers with the public (and if you are an Amherst Cinema member, admission is free). As part of that mission, Amherst will host a discussion with Rodney Evans at the screening.

Also this week: Amherst Cinema is no stranger to hosting niche film series, and two upcoming pictures should make the musicians and gardeners among you happy. First up is Grand Cru, director David Eng’s 2018 film about the life and times of Pascal Marchand, who arrived in Burgundy as a young poet from Montreal and grew to become one of the most famous names in winemaking. Showing as part of the cinema’s Gardening Films collection, it documents the catastrophic 2016 season in Burgundy, which saw devastating frosts, hailstorms and disease in Marchand’s vineyards.

A day later is Éthiopiques: Revolt of the Soul, a 2018 musical documentary from director Maciej Bochniak that Amherst is presenting as part of its 12-week Sound and Vision series, which brings concert films, docs, and biographies to the big screen. Bochniak’s film takes its name from the series of compact discs, masterminded by French music journalist Francis Falceto and producer Amha Eshete, that in 1997 introduced the wider world to the musical richness of Ethiopia. An African sound that also drew influence from Western soul, funk, and jazz, it was a music that flourished under the reign of Emperor Haile Selassie before falling victim to the Stalinist Derg regime.

Jack Brown can be reached atcinemadope@gmail.com.