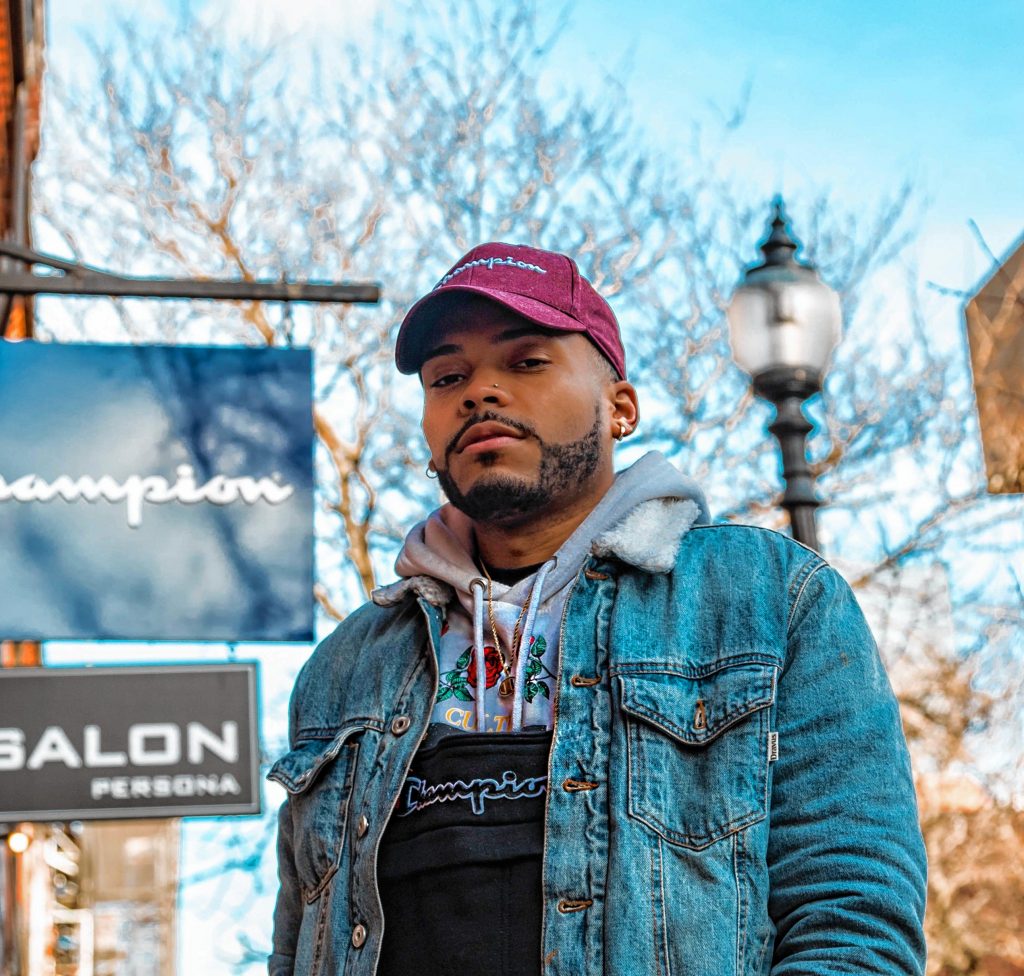 Springfield rapper Championxiii stands in front of a Champion store in Boston. He is not sponsored by the company, he said.

Twenty-three-year-old Springfield rapper Championxiii, has garnered quite the Internet following nearly overnight. In what started out as a part of his video series “rappers be like” on the short video sharing app Tick Tock, Championxiii’s hit single “Becky” now has over a million streams on Spotify in a little over a month. While Championxiii is unsigned at the moment, he and his manager/cousin Nico Cotto have met with several record labels, including Columbia records, Interscope, and plenty more.

Championxiii prides himself on his versatility as an artist. While making music since the age of 13, Championxiii has found comfort in R&B, hip-hop, and spoken word, which he shows flashes of on his 30-minute project Champion Status. Championxiii’s ceiling remains to be seen, but if the loads of fans rapping “Becky” on their Instagram stories is any indication, superstardom could be on the way.

Listen to the interview and some of Championxiii’s music:

Jonathan Kermah: Where did you grow up?

JK: It seems most of your fame has stemmed from the app Tick Tock. Could you explain what Tick Tock is to someone who hasn’t heard of the platform?

CX: Tick Tock is an app that basically gives the user the ability to influence a large audience whether it be makeup tutorials or dancing videos or lip syncing. Anything like that or along those lines. It was originally called Musically… I do have a very large following on it. I think I’m currently at—”

JK: And what do you think sparked your success on the app? Do you have a specific moment you can think of?

CX: Tick Tock is very hit or miss, but when you hit, you hit. I know plenty of people, including myself, who kinda jumped on this app like “Lemme make a funny video. Why not? I see everyone else doing it.” And the next day I go from 10 followers to 5,000. So when I saw such a jump, I was like “wow, people are really messing with me. I should see where this goes.” I just started going on the trending page and see what videos were putting out there. And I would look at these and be like “wow these are really good, but like I know that I could put my own twist on them and make them that much better.” And that’s exactly what I did. Five thousand turned to 7,000; 7,000 turned to 10,000; and so on and so forth until it’s like 50k in a week and then 250k in three weeks. It just jumps.

JK: So when you first started, was your music a part of your Tick Tock? Or were you just having a good time, and then put your music on there, too?

CX: So Tick Tock was kind of just for fun. I would make some comedy videos, maybe some lip syncing videos, stuff like that. And then when I got to around 650,000, I started doing this series “rappers be like,” where I kind of just tossed a beat on and freestyled to it. But like in certain ways that rappers these days would whether its mumble rap and stuff like that. It was a very high demand for them. I made one, two, three and people were like “these are so good, they’re so catchy.” I’m seeing people make a video to them, dancing to them, and stuff like that.

I was like “wow this is pretty cool, I can lowkey use this to my advantage.” But not in a malicious way, but in a way that could work for all of us. You guys can get your entertainment but I can also get something out there. I started taking those “rappers be like” and I started putting my own lyrics that I had already written from songs that I had made that I hadn’t released yet, just to see how they would react to them. The demand became even higher to the point where people were like “can this be a song?”

Tick Tock is only a 15 second segment. It’s a snippet, not the whole thing. You can’t just toss a whole song on there. But for them to hear these snippets and love them so much, it gave me that ambition.

JK: So we have to talk about your song “Becky.” That is currently your biggest song. I believe on Instagram, you posted that you had a million streams on Spotify. In less than a month, the song has gotten over 400,000 listens on Soundcloud. On your Instagram stories, you see a bunch of reposts of girls singing the song. My question for you is, do you actually know a Becky in real life that inspired the track?

CX: Yes, I do know a Becky in real life that inspired the track. Her name actually isn’t Becky, to keep the respect I changed the name for her. The song really is exactly how she was as a person.

JK: Did you expect the song to go viral like it did?

CX: I wasn’t expecting the song to blow up as big as it did. I figured that the song would be very catchy. I made sure it was something that I would promote to be a summer bop, something that was played all summer. When I was looking at my Tick Tock and the video itself and I’m seeing it reaching past 3 million in two weeks, that’s insane, and now it’s over 7 million and counting. It’s really something you step back from and go “wow, I really did that.”

JK: Do you guys have any concerns of the song “Becky” becoming bigger than you as an artist? An example would be Sheck Wes with “Mo Bamba” who hasn’t been able to find the same success after the song going viral.

CX: I mean that’s always a concern for an artist to be a “one hit wonder” or have a song that blows up and takes the vision away from what they can actually do. Would I say “Becky” is my best work? Absolutely not. I have way better songs that I know are very lyrically put together and very well mastered. But at the same time, we’re kinda in a day and age where if it’s popping, it’s popping. A lot of people will just focus on that main thing until it dies out. And that’s not always a bad thing. The way I see it, if “Becky” is hot right now, that gives me a good amount of time to perfect my craft.

You can stream Champion Status on all streaming platforms and follow Championxiii on Instagram and Tick Tock.