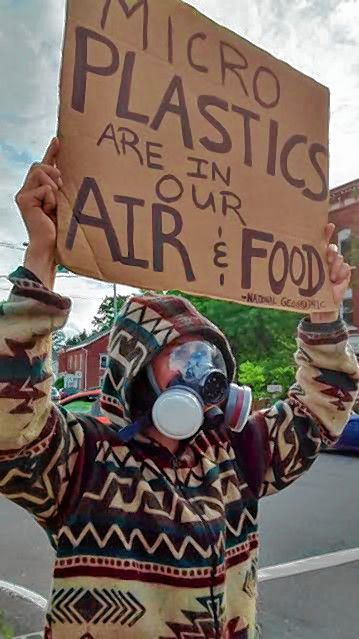 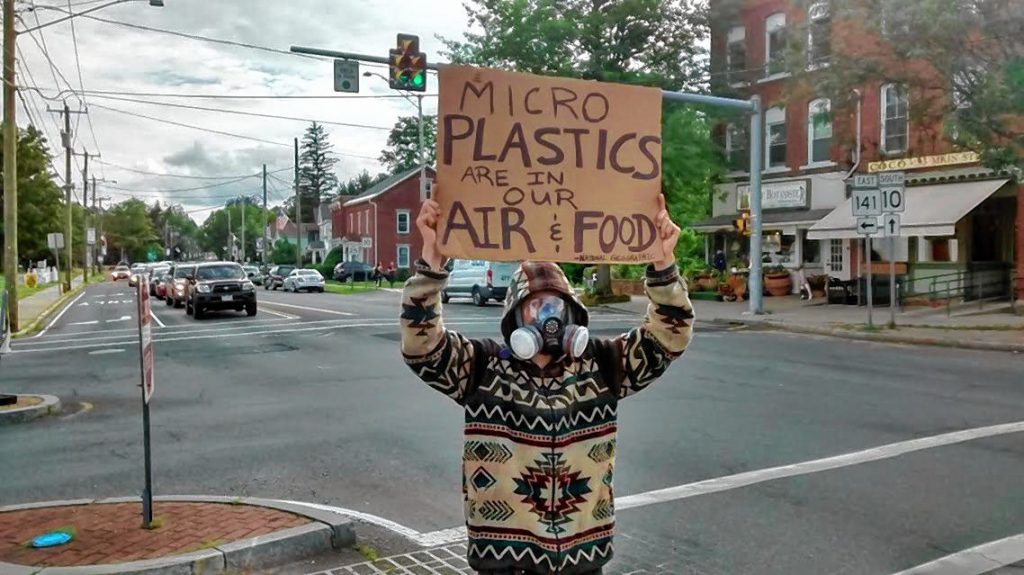 At least once a week, Jose Mediavilla, a 37-year-old Easthampton resident, stands near a crosswalk median along Main Street holding signs that read, “Microplastics are in our air and food.” He stands there holding the sign for passing cars and pedestrians for hours in bare feet wearing a gasmask on his face. 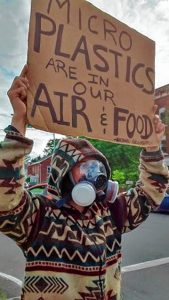 For Mediavilla, who is a United States Marine Corps veteran who went around the world finding the remains of those lost during the Korean and Vietnam wars, the presence of microplastics in the environment is a systemic issue that he’s worried about on a daily basis. He thinks others should be more aware of the problem as well.

“I’m out here today because I realize that a lot of people do not know about microplastics,” he said, speaking through a gasmask in mid-June. “And I find that the information really needs to get out. More people need to be aware because it would assist us to do the right thing and ban disposable plastics.”

Mediavilla said he doesn’t wear shoes because of the synthetic plastic-based fabrics found in modern footwear. When he was in the Marines, he saw children in Cambodia running on gravel everyday without issues and believes living barefoot is an alternative.

“I don’t wear shoes now that I’ve learned about it,” he explained. “I have to be asked to wear shoes if I go into the store. Even someone who wants to be 100 percent ethically correct in their lifestyle are prevented from doing so in modern day society. It’s hard to avoid these plastics. They should be banned at their source.”

When people buy food, water, and other necessary items, they need to do it in a way that doesn’t cause harm to the ecosystem we all depend on to survive, he said.

He said he’s had the police called on him in the past and has had several people approach him telling him he’s scared their children wearing his gasmask.

“This hurts wearing it for a long time,” Mediavilla said in regards to the gasmask. “If I do choose to come out here it’s usually as long as I can. Usually I hold the sign up and after a while my back starts to hurt. That’s when I know it’s time to quit. I’ve done a 9 to 5 out here.”

Clint Richmond, a member of the executive committee of the Massachusetts chapter of the Sierra Club, a grassroots environmentalist group, said he thinks Mediavilla’s way of drawing attention to microplastics is “a little obsessive,” but agrees with the point Mediavilla is trying to make.

Richmond, a resident of Brookline, was involved in the town’s plastic bag ban, which was one of the first communities in the state to ban polyethylene bags in 2012. He’s been involved with plastic related issues for more than a decade with the Sierra Club.

“One of the arguments we made for plastic bag bans was that plastic containers, specifically bags, form microplastics because plastic is a synthetic material. They don’t break down, but they’re not indestructible, so through mechanical action they break down into microplastics — smaller and smaller bits.”

Richmond said microplastics have been found to be in water, food, air, and soil.

“Things like tires are plastic. Rubber is not made from rubber anymore; it’s made from fossil fuel petrochemical polymer plastics,” Richmond said.

Commercial tires are made primarily from synthetic rubber — 60 percent of which is plastic, according to the International Union for Conservation of Nature (IUCN), a data and conservation organization based in Switzerland. The remaining 40 percent is made up of natural rubber, textiles, steel, and chemicals.

Plastic from tires makes up one of the top three sources of microplastics in the world’s oceans, according to IUCN.

And added to that problem is that microplastics can absorb other petrochemicals, which can be found in marine life, which is then eaten by people, he said.

In the Pioneer Valley, communities including Northampton, South Hadley, and Amherst all have plastic bag bans. The cities of Chicopee and Springfield are considering banning plastic bags, as well.

Meanwhile at the state level, lawmakers have proposed a state-wide ban of plastic bags. State Sen. James Eldridge (D-Acton) and state Rep. Lori Erlich (D-Marblehead) have proposed bills that are under review. Earlier this month, Erlich’s bill was favored by the state’s committee on Environment, Natural Resources and Agriculture and referred to the committee on House Ways and Means.

Mediavilla thinks disposable plastics should be banned and added that there are alternatives to plastic.

“Disposables should be banned,” he explained. “There are alternatives. People are making alternatives from cactus, from cassava, from all kinds of different mushroom mycelium. So, we’re supposedly an intelligent species. If we’re aware of causing so much harm, we should be able to, if we know those solutions exist, make them the standard.”