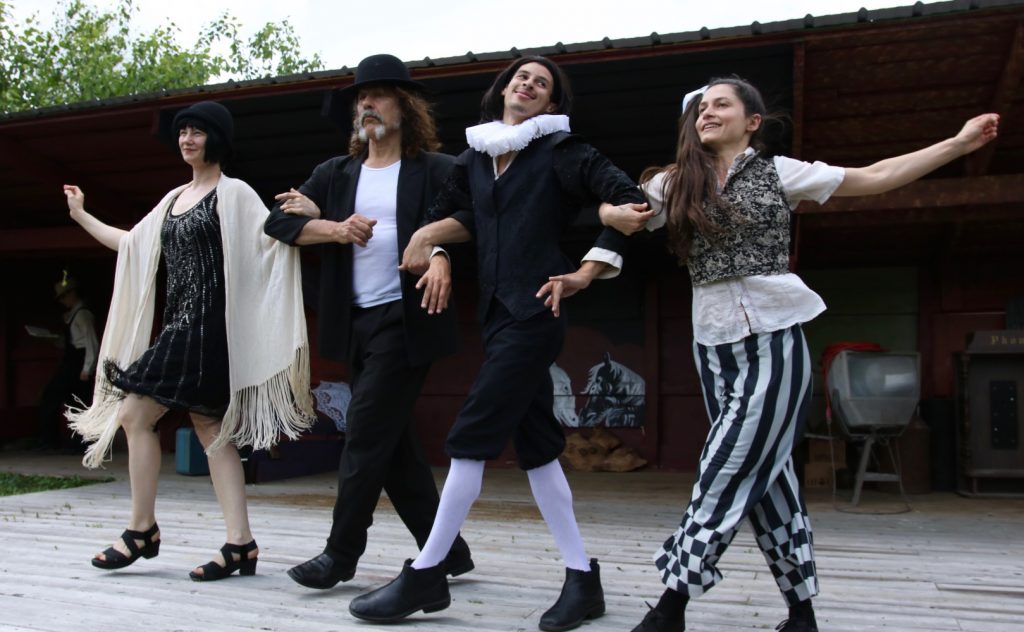 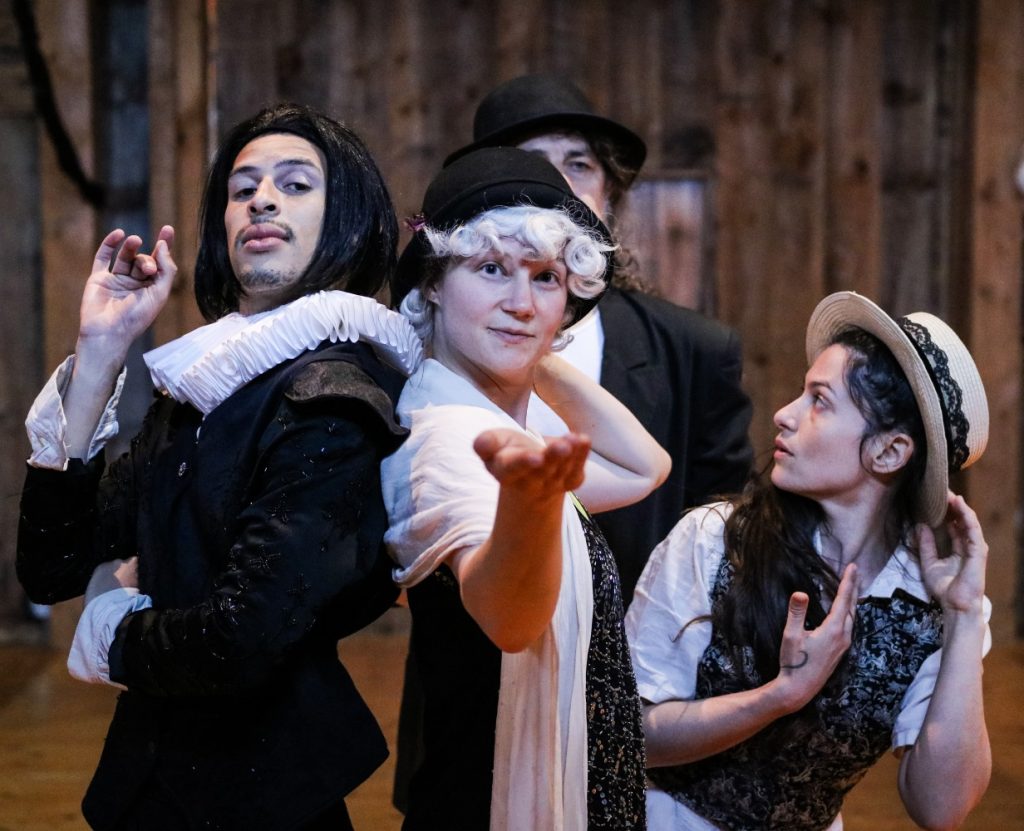 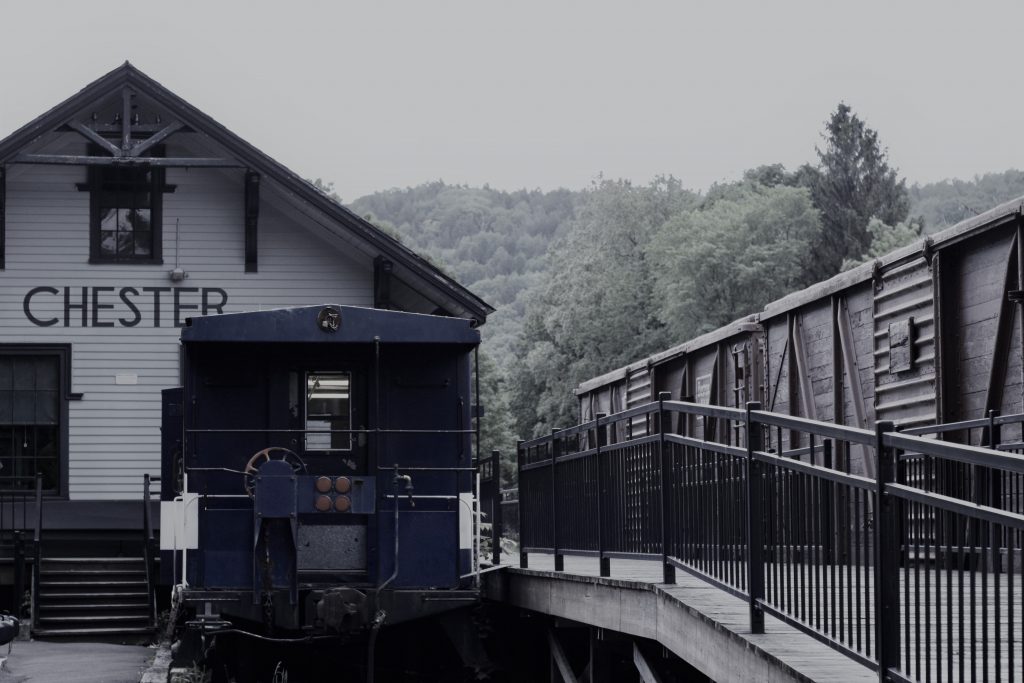 It’s summer, folks, time to get off our butts and take some exercise. A little stroll, perhaps, to enjoy the scenery – and a play. That’s the current invitation from two hilltown theaters. Double Edge Theatre presents a brand-new Summer Spectacle on its Ashfield farm, and Chester Theatre Company celebrates 30 seasons with a participatory tour of its hilltop hometown.

“Immersive theater,” as Chester’s publicity explains, is “a form of theater-making that puts the audience into the world of the show … freeing them from their seats.” It’s a different kind of storytelling that seeks “to create an immediate experience.” Both the Ashfield and Chester shows progress in stages, taking us on a short walk with frequent stops to observe, and sometimes interact with, the unfolding story.

The Baron takes off

I Am the Baron, at Double Edge, takes its inspiration from a surreal, satirical collection of stories purporting to be a German nobleman’s travel memoirs. The Surprising Travels and Adventures of Baron Munchausen describes its flamboyant hero’s fantastical voyages, including trips to the Moon, the Island of Cheese, under the sea, and astride a flying cannonball. Written in the 1780s and ’90s by Enlightenment author Rudolf Erich Raspe, the tales have been adopted and adapted in a variety of media, including by Monty Python’s Terry Gilliam in a 1988 film. 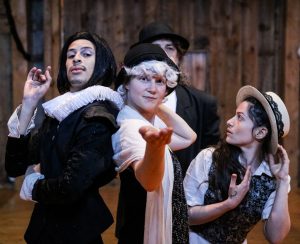 In Double Edge’s version, as director Matthew Glassman explained to me recently, episodes from the book are folded into an original narrative that investigates “the role of stories and storytelling, of heroism and myth, especially at this time in our history. So we’re talking about climate extinction, about so many people being uprooted, about survival.”

In the piece, co-written by Glassman, company member Jeremy Louise Eaton and Trinity College professor Mitch Polin, the audience follows a ragged vaudeville troupe on its journey through a barren, ravaged landscape. They are storytellers who have lost their way, “questioning if what they’re doing has any value, forgetting their stories and how to tell them, and they don’t know why,” Glassman said.

Here, the Baron is not the hero of his own story but, in various manifestations, a motivating figure who seeks to restore the spirit of community and oral history that is kept alive through storytelling. The vaudevillians, Glassman said, represent this gritty spirit: “Even though they’re lost, without much, they still have the courage to try to bring joy.”

As ever, the production is expansive and colorful, with acrobatics, giant puppets, banners, vibrant scenery, and yes, the Baron shooting out of a cannon. The show is also a celebration of the company’s 25 years in Ashfield, adding their own unique spirit to the Valley’s story.

A gem of a tour

“Gem of the Valley” is the town of Chester’s unofficial nickname and the title of Chester Theatre’s midseason special, coming this weekend. John Bechtold, the Valley’s master of immersion, told me he’s designed the piece “for a small group of audience members to discover the town and its homegrown theater company through the overlapping lenses of theater-making and dreaming.” He said the show is also a tribute to the company’s founder, Vincent Dowling, “whose passions seemed to be equally compelling in both of those worlds.”

Bechtold has created several other site-based immersive pieces in the Valley, including a couple in Greenfield with Eggtooth Productions (a co-producer of Gem) and with the Emily Dickinson Homestead in Amherst. He said this one is intended to “commemorate the town and theater’s enduring relationship in a new and interesting way.” 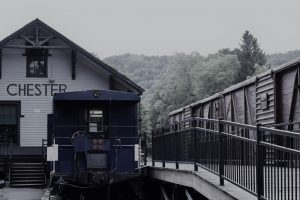 In Gem of the Valley, groups of six will take an hour-long guided walk through the town center, from the vintage train station to the theater, equipped with headphones playing a pre-recorded soundtrack. A voice in your ear, Bechtold explained, “guides you through the show, offering not only navigational guidance, but aesthetic guidance as well.” At various points along the way, travelers will encounter some 20 performers – whose precise roles are secret for now – with a thematic surprise at the end.

“Since the town of Chester is the biggest and most important character in the show,” Bechtold said, “gentle emphasis is put on the audience to explore the town, to see it through an aesthetic frame, with a blurry line between the actors and other presences around the town.”

He told me he wants audiences “to feel like central characters in the show themselves,” but unlike the infamous actor’s nightmare, in a situation “where it’s impossible to fail.”

The art of acting, he mused, “is such a strange and exciting art form. Much of this show is about the often thin layer that exists between art and real life for actors. I’d love the audience to develop some deeper appreciation for the magic that is acting and the theater of everyday life.”

July 18-20, 3 and 6 p.m. (some performances already sold out). Gather at Chester Town Hall.
Visit chestertheatre.org for tickets, also weather, accessibility and other FAQs.