That’s One Small Step for a Band: Bandella, a musical group including astronauts, will play Hawks & Reed on July 27 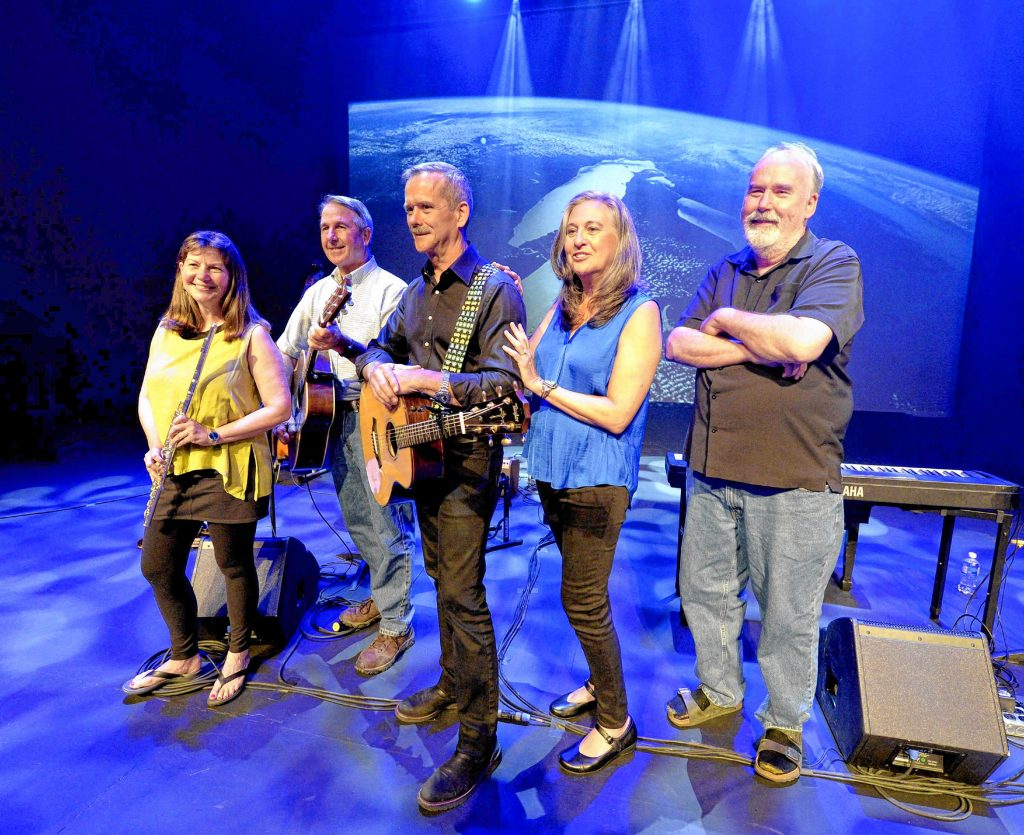 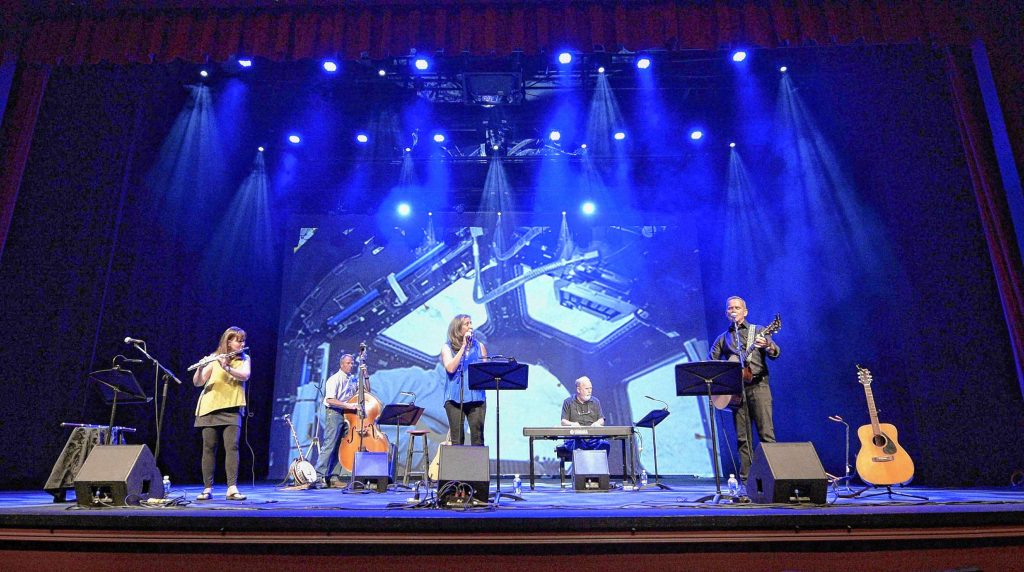 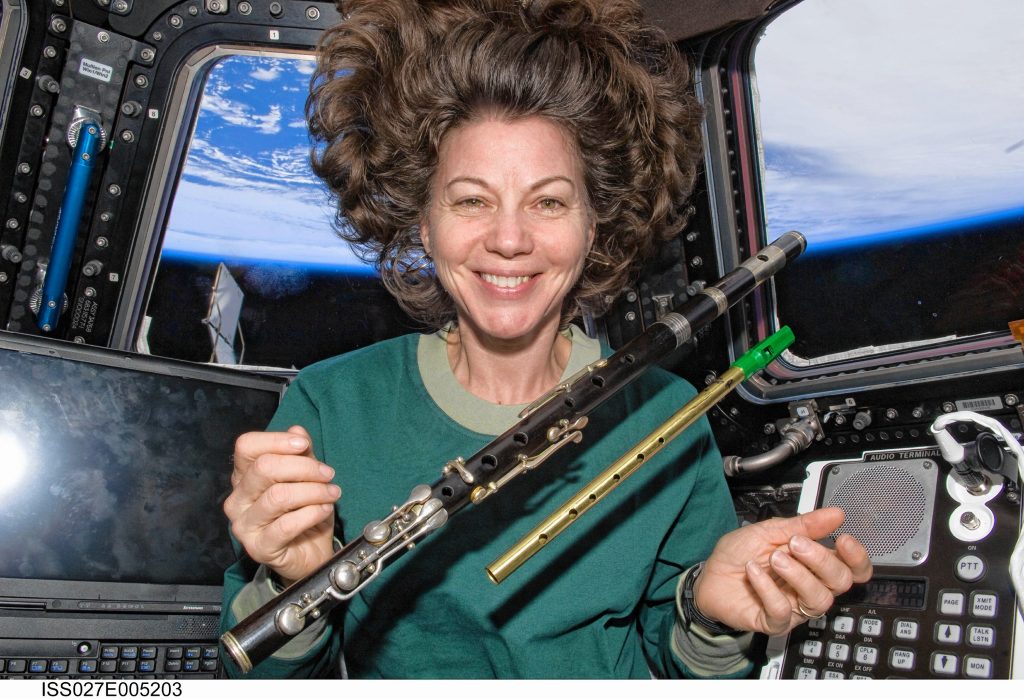 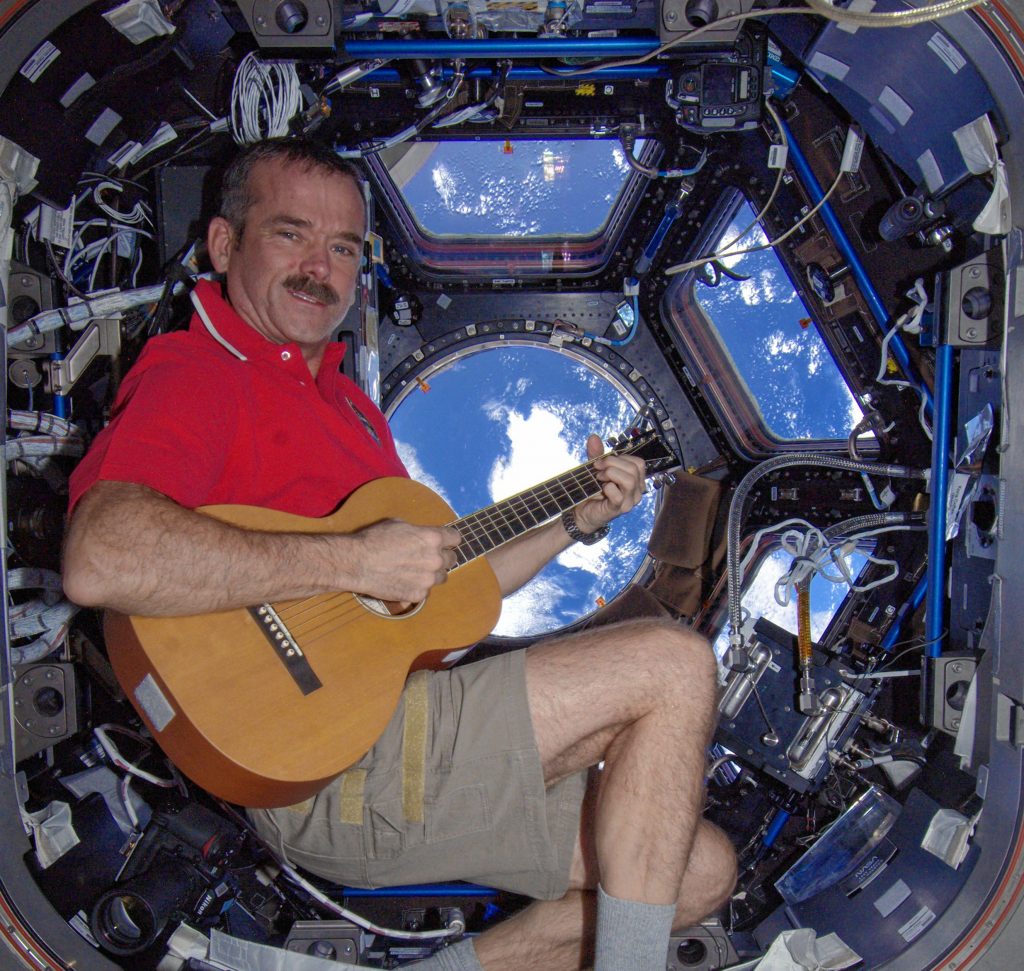 Half a century ago, humanity took its first step outward into the greater universe around us during the 1969 Apollo 11 moon landing. In celebration of that achievement, Bandella, a Houston, Texas-based folk-rock and world acoustic group made up of retired astronauts, will rock out with a benefit show for New England Public Media at Hawks & Reed Performing Arts Center in Greenfield on July 27.

Bandella plays a mixture of original songs, bluegrass, jazz, and folk-rock staples from the 1970s and 1980s and is led by retired Canadian astronaut Chris Hadfield (singer and rhythm guitarist). Hadfield performed a cover of David Bowie’s “Space Oddity” while aboard NASA’s International Space Station (ISS), which has been viewed more than 40 million times on YouTube.

There’s also NASA astronaut and Shelburne resident Catherine “Cady” Coleman (flute), Micki Petit, whose spouse is a NASA astronaut (vocals), retired NASA astronaut and UC Davis professor Steve Robinson (guitar, banjo, stand-up bass), and Dave Webb, a long-time friend of the band (keyboards). Although the band was never all together in space, they’ve been making music as a group for more than 16 years.

Coleman told the Valley Advocate she thinks that art and science belong together.

“With art and science and vision it’s all about a journey and it’s all about exploring,” she said. “Different people do it in different ways and yet it’s a part of all of us … Playing is about the joy of music together — of something that happens when you play together when you’re practicing. There’s a certain chemistry that we have that is pretty magical. One of the things that we bring when we play together is, ‘Wow. They’re real people. They’re good musicians. I like what I hear.’ Sometimes, without knowing, they go home knowing that people with extraordinary jobs are real people and one of those people might be them.”

Hadfield, who is the first Canadian to walk in space, said the group has performed hundreds of songs all around the world and have chosen about 30 songs for their set at Hawks & Reed.

“Since three of the band members have lived off the planet for an extended periods and flown space ships, that’s a pretty unusual thing,” he explained. “So, some of the songs are about that and we’ll have some imagery up. I’m the frontman of the band. I’ll definitely do some interacting with the audience with question and answer. We’ve done stuff that no other band in the world has done, so it’s kind of a waste if we don’t let people ask questions.”

Coleman said during the band’s performance there will also be a screening of selected scenes from Robert Stone’s new film series, Chasing the Moon, which is a six-hour documentary about the space race culminating with the first moon landing in 1969.

While living aboard the International Space Station in 2011, Coleman had the opportunity to play a flute duet with Ian Anderson of 1970s British progressive/ folk-rock band Jethro Tull on the 50th anniversary of human space flight to honor Soviet cosmonaut Yuri Gagarian, who was the first human to journey into outer space and complete one orbit of the planet in his capsule Vostok 1 in 1961.

She said Anderson sent her a flute to play while in space before he went on tour with Jethro Tull in Russia, where he performed his half of the duet.

“He was very funny and very personable,” Coleman explained. “We didn’t meet until after we got home, but we tried together to figure out what we could do to make some ripples, make some waves beyond what he and I experienced.”

Only a fraction of the 7.7 billion people living on Earth today have been to space, let alone play music aboard the ISS. For Coleman, most of the days she worked aboard the ISS were busy ones.

“I’d often get my flute out late at night and play a little bit,” she explained. “It’s just centering and brings back your sense of self. We sleep at either end of the space station. There’s a Russian end of the space station and a U.S. end. We’re all sort of mixed up, but in the middle there’s a cuploa. And the cupola is an amazing place where we look out the window and have that 360 degree view … It made me feel connected to Earth and it made me feel connected to myself.”

Hadfield said his first space flight was shortly after Coleman’s. He was on Space Shuttle Atlantis with a mission to assist in the building of Mir, Russia’s space station in 1995.

“I had been basically getting ready for that flight since I was nine years old, studying and changing who I was, since I was inspired by what Neil and Buzz and Mike did 50 years ago this weekend,” he said. “And so, it was a huge event. I was part of the flight crew. I was an engineer, but also a test pilot. It’s very cerebral and a huge amount of work. It’s extremely dangerous. The odds of the space shuttle coming apart that day and killing us at launch were one in 38, which is terrible odds.

He continued, “It’s also very powerful and visceral. It pounds and shakes and vibrates and pummels you with all of the forces involved. It’s 80 million horsepower at launch, which is pretty overwhelming. But at the same time you’re working the ship and working your way through complex checklists and ready for 10,000 things to go wrong. But you don’t just ignore what’s happening. It’s also hugely exciting and beautiful and magnificent and rare. You’re crushed in your chair as the vehicle rams itself through the speed of sound and in 45 seconds accelerates straight up. The big solid rockets explode off after two minutes. And then you have another six and a half minutes of the world’s most powerful dragster as you keep going faster and faster until after about eight and a half minutes you’re going five miles a second. And then the engines shut off and you’re weightless instantaneously, wonderfully, magically weightless.”

Hadfield said he often thinks about humanity’s journey to space. That’s why he keeps a stone ax on his desk, which was made by a member of homo erectus, the species of extinct hominids that predates modern humans and dates back to 1.8 million years ago.

“It’s over a million years old,” Hadfield explained. “It predates homo sapiens. Someone made that tool so they could try to improve the quality of their life and the life of their family. I do a whole speaking tour on exploration and human achievement and teach at university and have written books on that whole idea — how our inventiveness and necessity to explore places and ideas, that’s what has led to the quality of life that so many billions of people enjoy. It’s a relentless fundamental human urge.”

Coleman said she’s excited about the future of space travel and how the technologies that people develop to explore the solar system could be used on Earth dealing with issues such as global climate change.

“[The first human space flight to Mars] is going to be so amazing and make people everybody realize that anything is possible if we just work together to do it. I know it sounds trite, but it’s really true. If you let people bring what they can bring to the table, we can solve anything. What’s really exciting is if we’ve gotten a person to Mars or we’re colonizing the Moon, and really going to these places and doing these things, which I am certain we will be doing in the near future, it means that we have developed the capabilities to solve a lot of Earth problems as well. In order to go to Mars, we have to recycle our air, recycle our water, learn how to grow plants in places where it’s really hard to do that.”

For more information or to purchase tickets to the group’s show at Hawks & Reed visit https://www.ticketfly.com/event/1870059-bandella-band-astronauts-greenfield/.